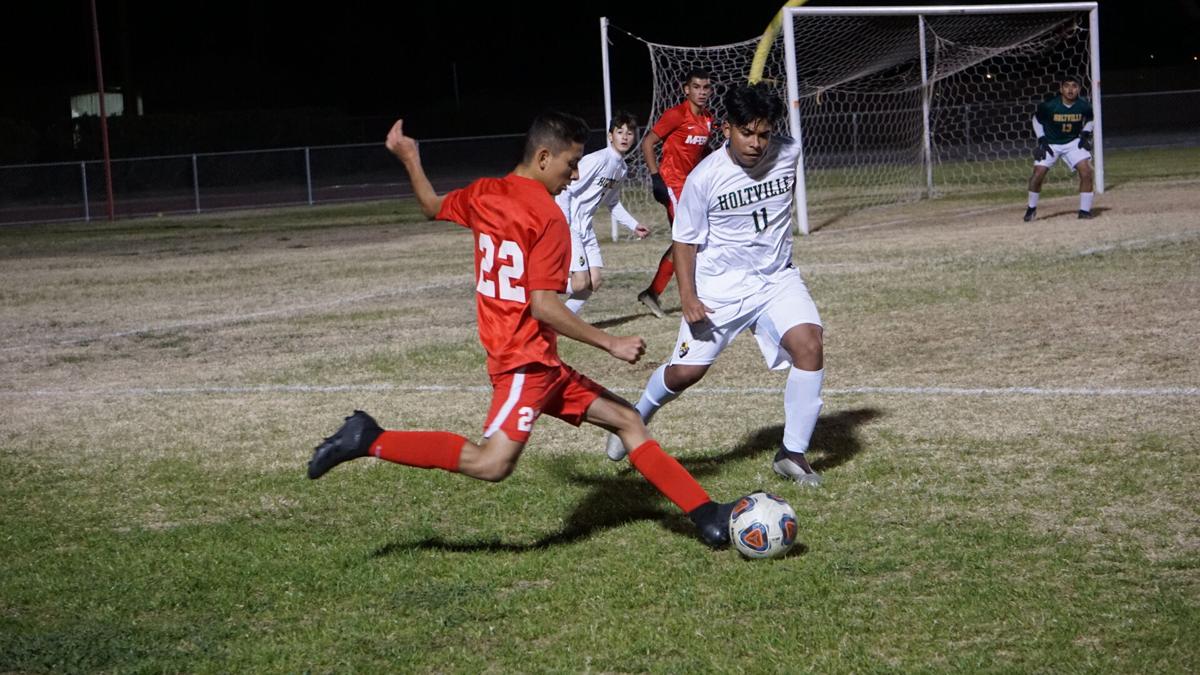 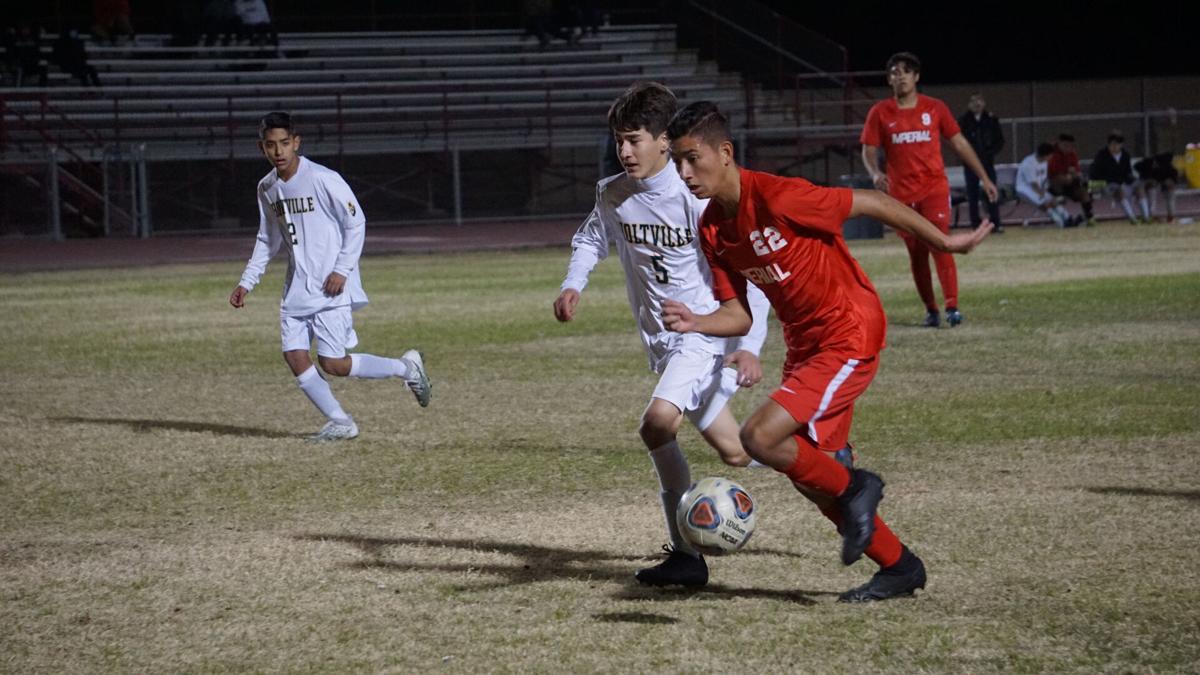 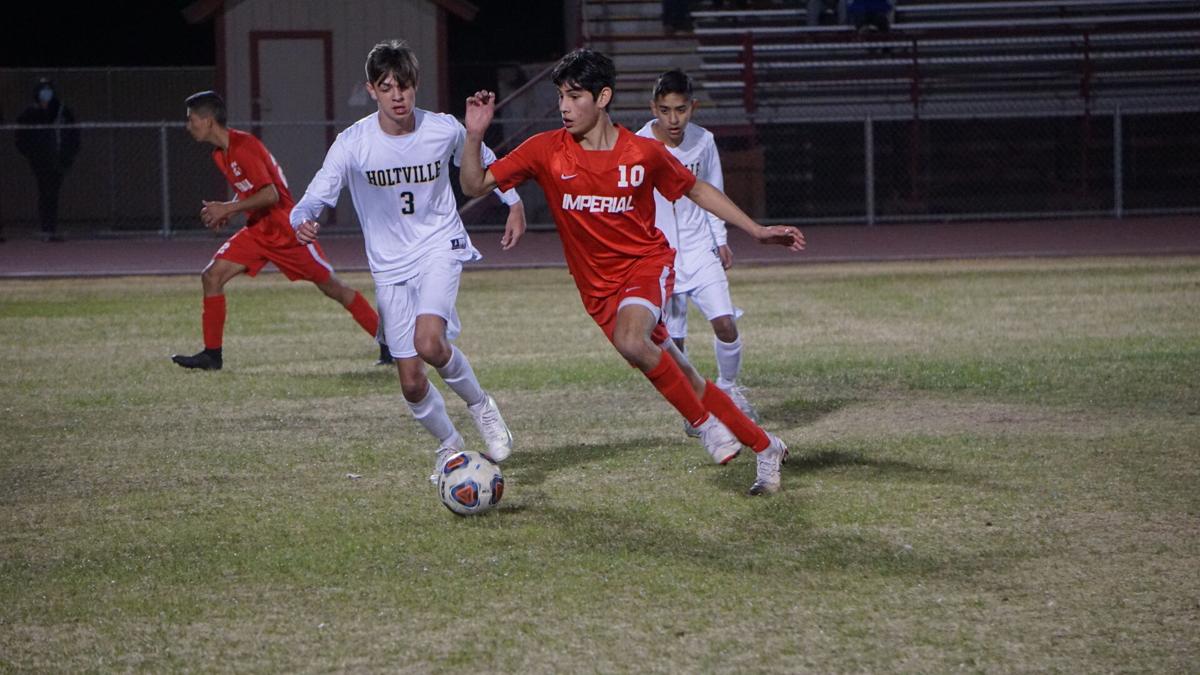 Imperial's Sebastian Gutierrez (#10) works his defender for an opportunity at goal against the Holtville Vikings for the annual Desert Cup match Tuesday, Jan. 4. 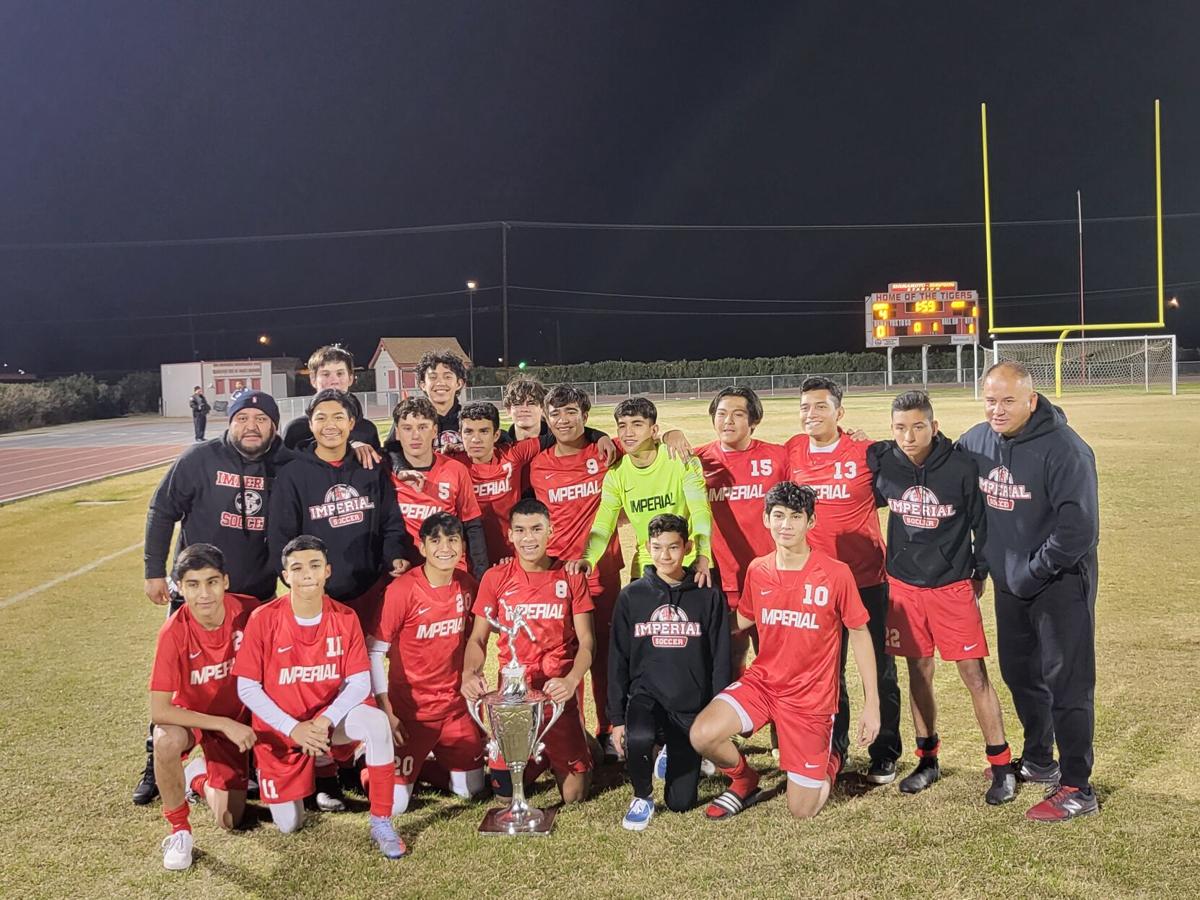 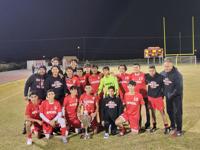 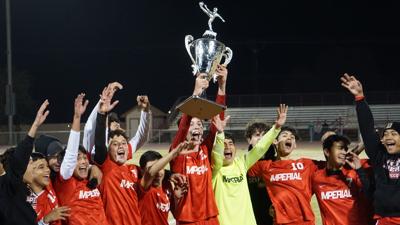 Imperial's Sebastian Gutierrez (#10) works his defender for an opportunity at goal against the Holtville Vikings for the annual Desert Cup match Tuesday, Jan. 4.

IMPERIAL — The Imperial High School Tiger boys‘ varsity soccer team hosted the Holtville High School Vikings Tuesday, Jan. 4, for the annual Desert Cup match that resulted in a landslide victory for the Tigers, 4-1. With this victory under their belts, the Tigers retained their Desert League Champion status for the third year in a row.

“This is the third year we have won the Desert Cup and even though I was not part of the team in the previous years, I am proud of how our team never stopped working and competing on the pitch,” said Ethan Gonzalez.

Despite the victory for the Tigers, the Vikings were the first team to strike a goal on the pitch. Opening the first minutes of play, the Vikings spread out the Tigers defense with precise passes. After maneuvering their way into the penalty box, Holtville’s Bryan Aguirre passed the ball to Juan Carlos-Rodriguez for a shot-on-goal that worked past the goalkeeper and into the back of the net, 1-0.

Moving through the remainder of the first half of play, the Tigers found themselves with three shots-on-goal but were kept out by the Vikings’ goalkeeper, Bryan Padilla.

Down one, the Tigers took the pitch in the second half with some pace as they immediately pressed the defense. Only minutes into the second half of play, the ball was passed to the Imperial’s Saul Gonzalez, who dropped the ball around the defense for an open shot that zipped past the goalkeeper to even the match at one.

Shortly after, Saul Gonzalez found himself with another through ball that put him in position for another shot-on-goal that found its way around the goalkeeper and into the back of the net for the first lead for the Tigers, 2-1.

“We have a solid team, and I try to contribute to this team by scoring these types of goals when I am presented with the opportunity,” said Saul Gonzalez.

The action picked back up shortly after with another offensive press by the Tigers. On the possession, Ethan Gonzalez received a pass inside the penalty for a shot-on-goal that flew by a diving Viking goalkeeper, 3-1.

Proceeding toward the goal, the Vikings picked up the pace for a chance at goal. The offensive push downfield started with a long pass by the Vikings’ Ramon Camacho that connected with Gael Quintero. Quintero controlled the ball at his feet and took his shot, but the ball was kept out by the Tigers’ goalkeeper, Gabriel Ramirez.

Imperial passed the ball through the Vikings’ defensive line to connect with Saul Gonzalez. After breaking his last defender, Saul Gonzalez took a shot on goal that was deflected by the goalkeeper but landed at the feet of Ethan Gonzalez for a wide-open shot that found the back of the net, 4-1.

“We played a good match tonight, but we need to keep working as a team and find ways to create opportunities to score out on the pitch,” said Ethan Gonzalez.

With no further action, the Tigers walked away with this victory to push their record to 7-7-3. After this loss, Holtville’s record fell to 6-6-1.

Imperial will travel to Ramona High School to face off against the Bulldogs Friday, Jan. 7, while the Vikings will travel across the Imperial Valley to face the Calipatria Hornets Thursday, Jan. 6.