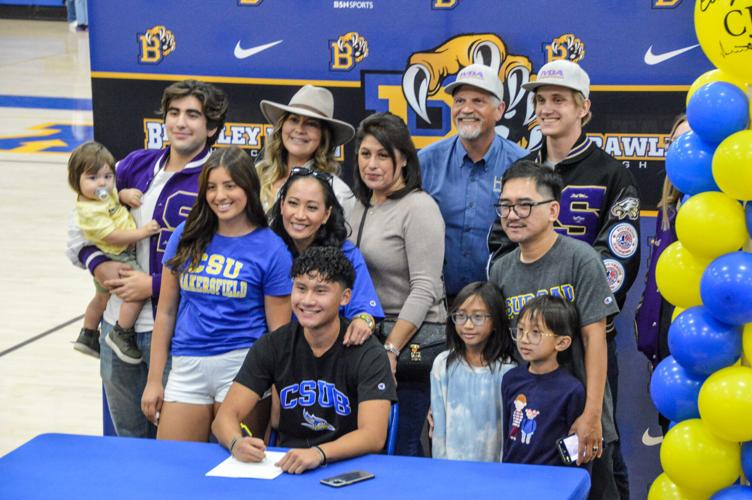 Wildcat swim specialist CJ Manuel was celebrated for his letter of intent signing before family, friends, coaches, and peers Tuesday, November 15 at the new gym on the BUHS campus in Brawley. 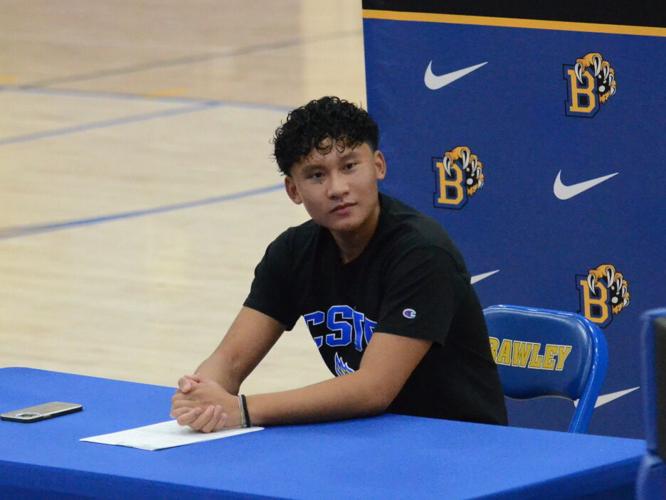 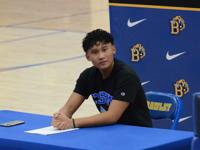 Wildcat swim specialist CJ Manuel was celebrated for his letter of intent signing before family, friends, coaches, and peers Tuesday, November 15 at the new gym on the BUHS campus in Brawley.

BRAWLEY — Wildcat swim specialist CJ Manuel was celebrated for his letter of intent signing before family, friends, coaches, and peers Tuesday, November 15 at the new gym on the BUHS campus in Brawley.

Manuel signed a letter of intent for swimming at California State University of Bakersfield.

Brawley Athletics Director Billy Brewer greeted and thanked everyone in attendance to open the ceremony.

“We are proud of him and we look for great things from him in the future,” said Brewer before handing the microphone over to Manuel’s Brawley swim coach, D’Ann Luckey.

As per coaches, Manuel started swimming with Imperial Valley Desert Aquatics (IVDA) when he was seven years old.

Luckey indicated that Manuel has attended many meets with that club including Future’s Championship in Santa Clara, CA, Speedo Sectionals in Carlsbad, CA, Western Age Group Zones in Gresham, OR, Holiday Festival Invitational at Arizona State University, Kevin Perry Invitational La Mirada, CA, Speedo Grand Challenge in Irvine, CA, Far Westerns in Pleasanton, CA, and the Junior Olympics in San Diego, CA where he is currently the San Diego/ Imperial County record holder for the 13 and 14-year-old 50-meter back stroke.

Manuel's freshman season was cut short after one swim meet due to the pandemic.

“Going into the 2021 season, Manuel had a goal of breaking all of the high school individual event records,” said Luckey. “By the end of his sophomore year, he held six of the eight records. His junior year, he broke record number seven but unfortunately, the 100-yard breaststroke has eluded him. However, he was very close last year and I’m sure it’s in his future this upcoming season.”

After a congratulatory speech by another one of Manuel’s coaches who would train him out of Coronado, Paul Folts, Manuel signed the letter.

According to Manuel, he was in the gym about a week ago when he was notified via email by the Bakersfield head coach.

“I was really happy (when I found out) and felt very blessed and was just thanking God and my family,” said Manuel. “The first thing I did was show my family, thank God, tell all my friends, and I was just so happy.”

Manuel elaborated on his continual motivation considering he’s accomplished so much in only three years.

“There is a lot of motivation behind all of this,” said Manuel. “First off my parents - they work hard every single day. I see them work hard and it makes me want to work hard. One of my coaches had a stroke, she’s been through a lot these past couple of years, it’s been hard for her, and if she can do it, I can do it too. My coach Paul Folts drives Tuesdays and Thursdays here to the Valley (from Coronado) to coach me which also motivates me. And, also my friends and family showing their efforts toward me, makes me want to put in as much effort if not more.”

Manuel also highlighted that winning CIF would be a lasting memory he would like to leave behind this fourth and senior year.

As per Manuel, his highest collegiate goal would be to compete in the NCAA championships.

Manuel currently has a 4.32 GPA and will pursue nursing in college.

“Lastly I would like to thank everybody here for supporting me including God, my coaches, my friends, and family,” said Manuel.