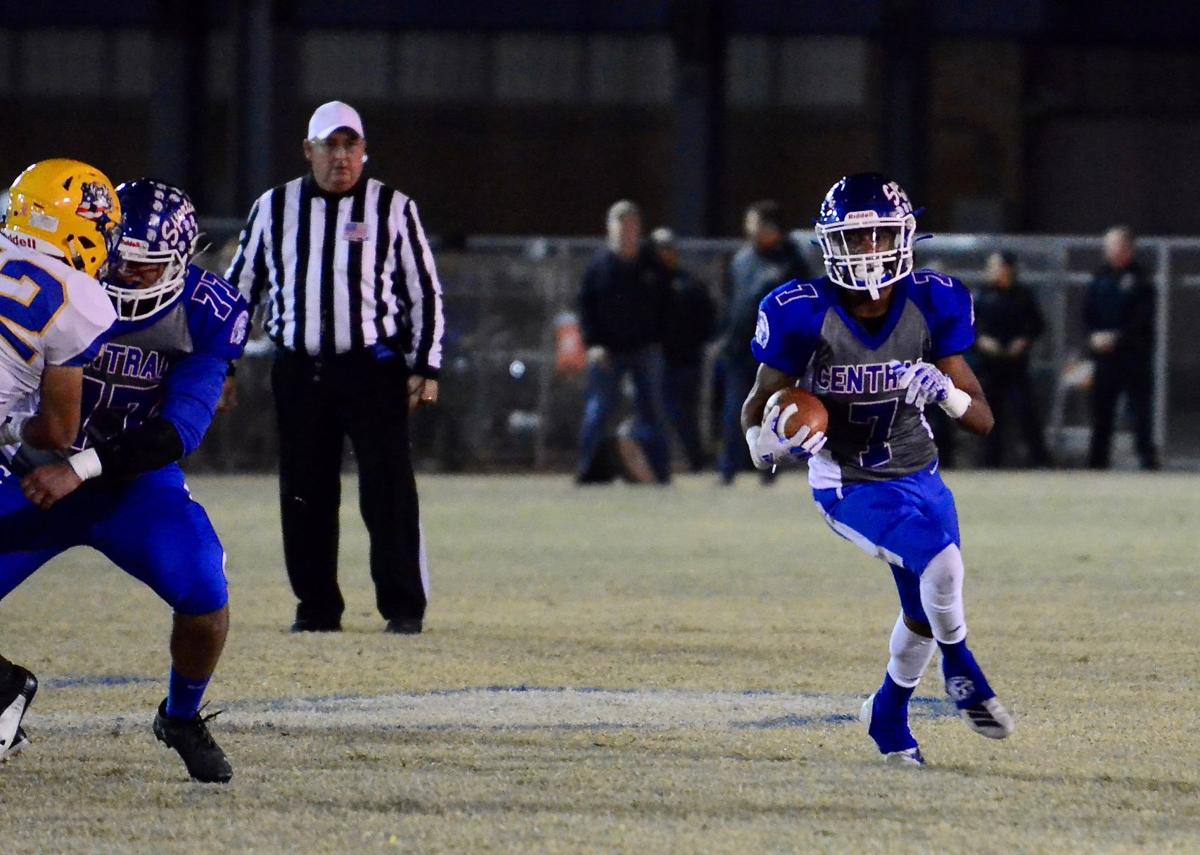 Marcus Moore sweeps wide of the Brawley defensive line on his way to yardage. 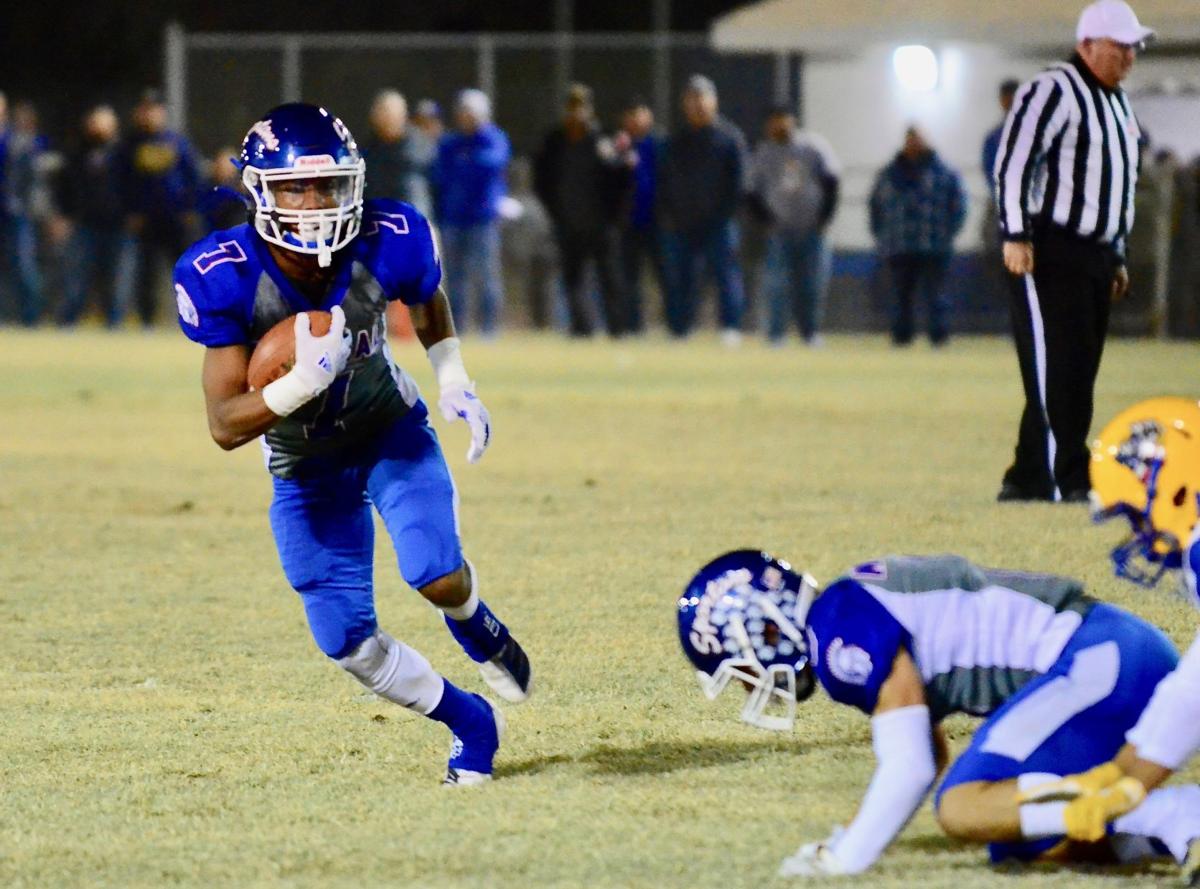 Central Spartan Marcus Moore uses the cleared field toward a first down. 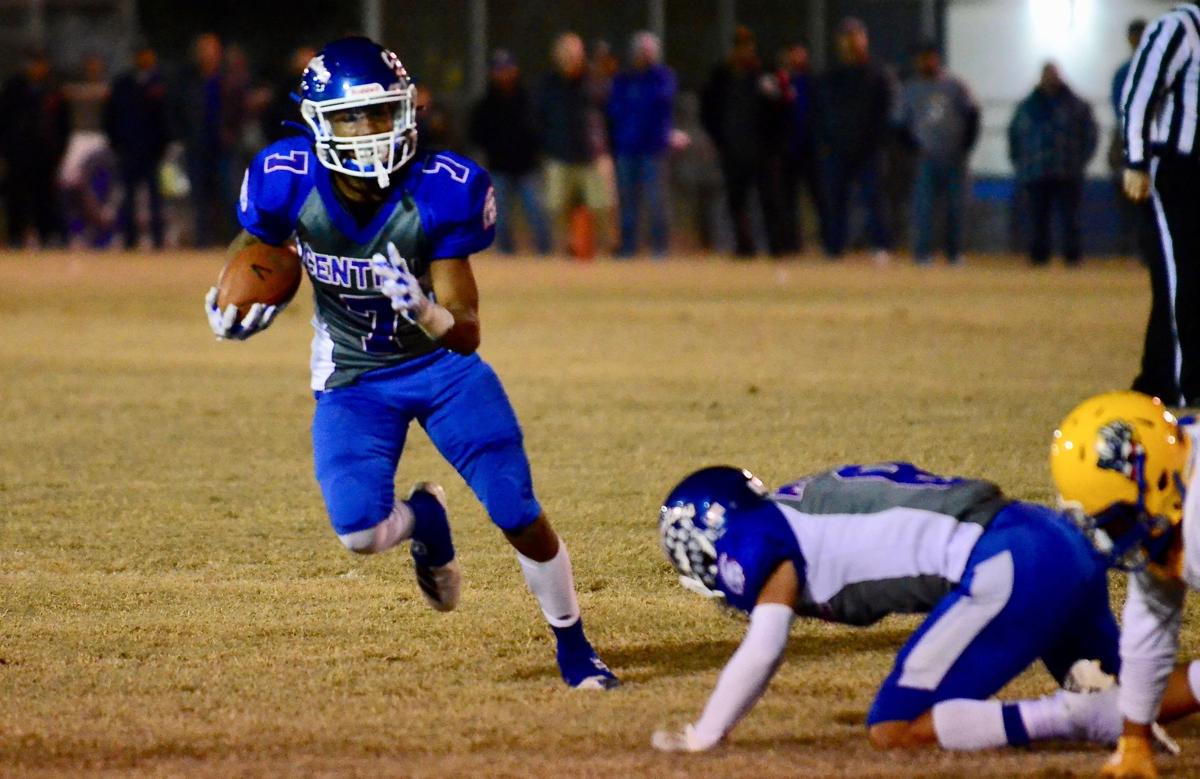 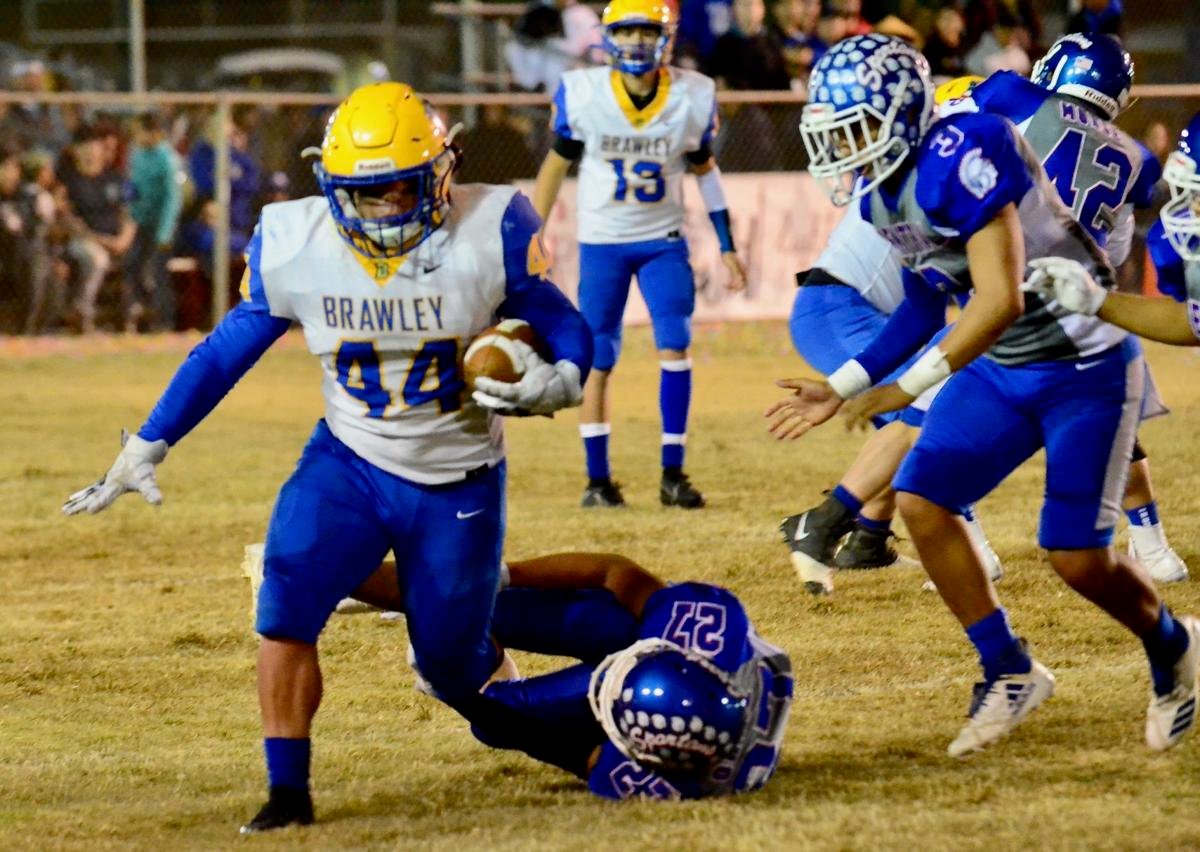 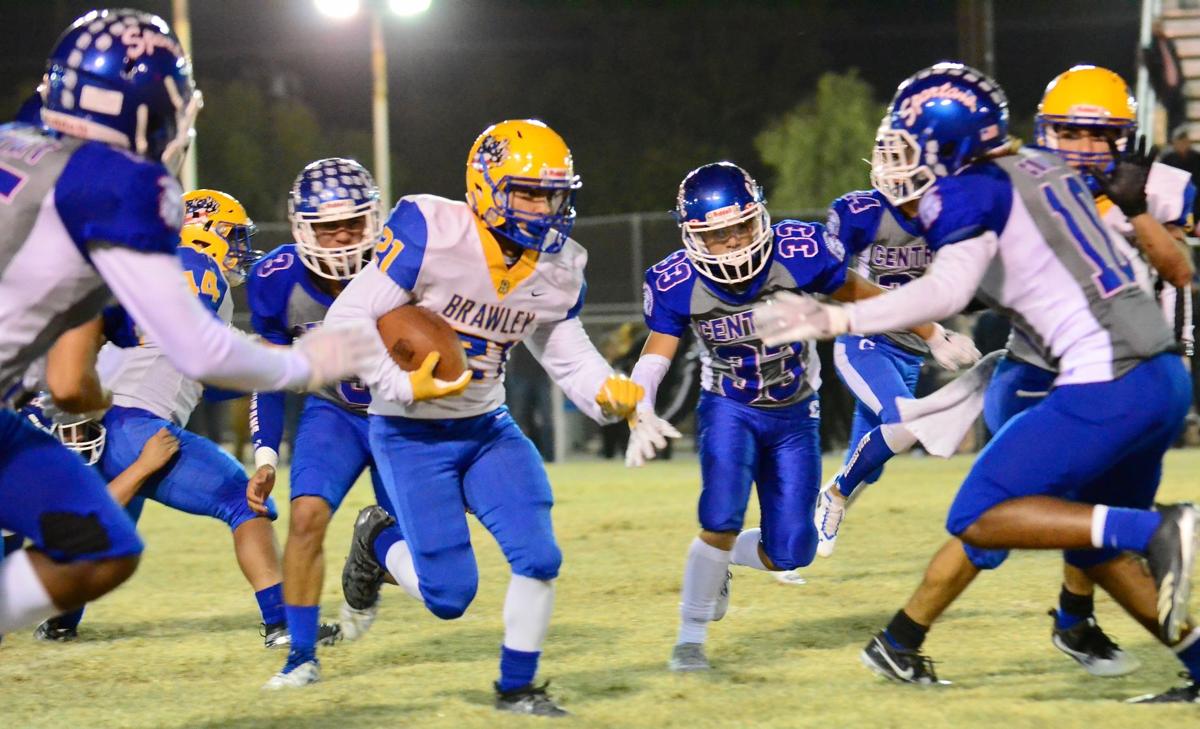 The “triple” being the first time Central has won three consecutive Bell games since ’87-’88-’89 when they won six straight years. The “double” was being the first team to win the IVL football title outright two years in a row. When it was all over, the scoreboard showed a lopsided victory in a game that started off strong for the Wildcats but had an entirely different ending.

The Wildcats began their game like every game this season; being the first to score. In ten games this season, Blake Krigbaum (10 carries for 119 yards and one touchdown) did what he had done in four other games — he took the first carry and scored a touchdown. He ran for 75 yards with only 13 seconds on the clock. The Wildcats were on the scoreboard first. Xavier Perayda added the point after kick and Brawley was ahead 7-0 with 11:47 left in the first quarter.

Things looked just as good for the Wildcat’s on defense when it forced Central to punt after one first down. Punter Jose Berlin-Torres was a big weapon for Central in the kicking department, as he would have the Wildcats deep on their side of the 50-yard line, often at or inside the 20.

Brawley’s second drive found them at their own 19-yard line hoping to increase the seven-point lead. A first down after two plays showed promise until play three. Running a quarterback keeper, Ethan Gutierrez was stripped of the football before being tackled by Angel Nava-Esparza, and 29 yards later the score was tied at 7-7 with 8:58 in the first quarter.

“I was very upset after we gave up that touchdown and I knew we needed a big play,” said Nava-Esparza.  “I was able to read the play because we watched a lot of film so once I saw the formation, I knew it was going to be a draw-play and then I just did what i did.  As far as defense, my teammates did a great job – everybody was getting tackles, there was turnovers all over the place, and i’m grateful for my guys.”

The next kickoff mimicked all six in the game by way of a touchback and the Brawley offense beginning all their drives from the 20-yard line or deeper.

Brawley’s offense had a bit of success in two first downs, but were forced to punt close to the end of the first quarter. While Brawley was constantly deep in their territory to begin their drives, the Spartans were on the opposite side of the spectrum. They began their next drive from the 47-yard line, 53 yards were covered in eight plays as senior Deniro Osuna (nine completions in 24 attempts for 98 yards) threw his only touchdown pass of the game to Brian Martin for a 21-yard score. Central led 14-7 and would be looking into their rearview mirror at the Wildcats for the remainder of the game.

Brawley’s 152 total offensive yards, mostly rushing, managed a few first downs on their next drive but also sizzled and were forced to punt. The punt was a short one and gave the Spartans great field position once again.

It would take nine plays to cover 46 yards, increasing the Spartans’ lead. A huge 30-yard pass from Osuna to Fernando Morales would normally be enough for a first and goal at the three-yard line but the Spartans did it on a second and 32. The Wildcats forced Central into a fourth down at the five and chose to kick a field goal to get points.

Brawley was hit with a penalty when they ran into the holder during the field-goal attempt and put the ball on the two. Central coaches decided to take the three points off the scoreboard and cash it in for seven. The strategy worked as Nava-Esparza increased the lead to 21-7 with 7:29 left until the halftime break.

The only bright spot on Brawley’s next drive was a face mask penalty but it didn’t propel the offense to much else. Both teams exchanged punts and Central gained possession at their 40 with 56 seconds until the half ended. In 40 seconds, the Spartans were able to run ten plays and came out with a successful field goal to take the 24-7 lead into the break.

The second half started with a bang for Central when, on the first play, leading rusher Carlos Gomez ran for 50 of his 121 yards on 12 carries. With the ball moving from their 35 to the Wildcat 15-yard line, the Spartans extended the lead to 31-7 less than two minutes into the second half. Nava-Esparza punched it in from three yards for the score.

Three punts were exchanged once again as the inevitable was becoming apparent. Carlos Gomez added a touchdown run of 31 yards with 4:11 left in the third quarter. The point after was not successful and the score was 37-7.

Three offensive plays netted negative nine yards and the scare of a fumbled ball luckily recovered by Wildcat Daniel Caloca. That only prevented a turnover, but a blocked punt two plays later gave Central two points on a safety as Brawley attempted to kick out of their end zone. It was 39-7 with 3:07 left in the third quarter.

The exclamation point of the game came in the fourth quarter. While a safety can be rare in games, the Spartans were able to convert a second one in the opposite end zone. During an attempted punt, a bad snap delayed kicking the ball and was blocked out of bounds for two more points on the Spartan side of the scoreboard. This increased the lead a final time to 41-7 for Central and it would remain until the final seconds ticked off the scoreboard. A chorus of “We Are the Champions” echoed throughout Cal Jones Field as the Spartan celebration began.

“The kids and the coaching staff did an excellent job tonight at executing the game plan,” said Pena.  “We played a very dangerous Brawley team and we knew that everything goes out the window in a rivalry game.  The kids played hard on both sides of the ball.”

The Central Spartans are once again IVL football champs.