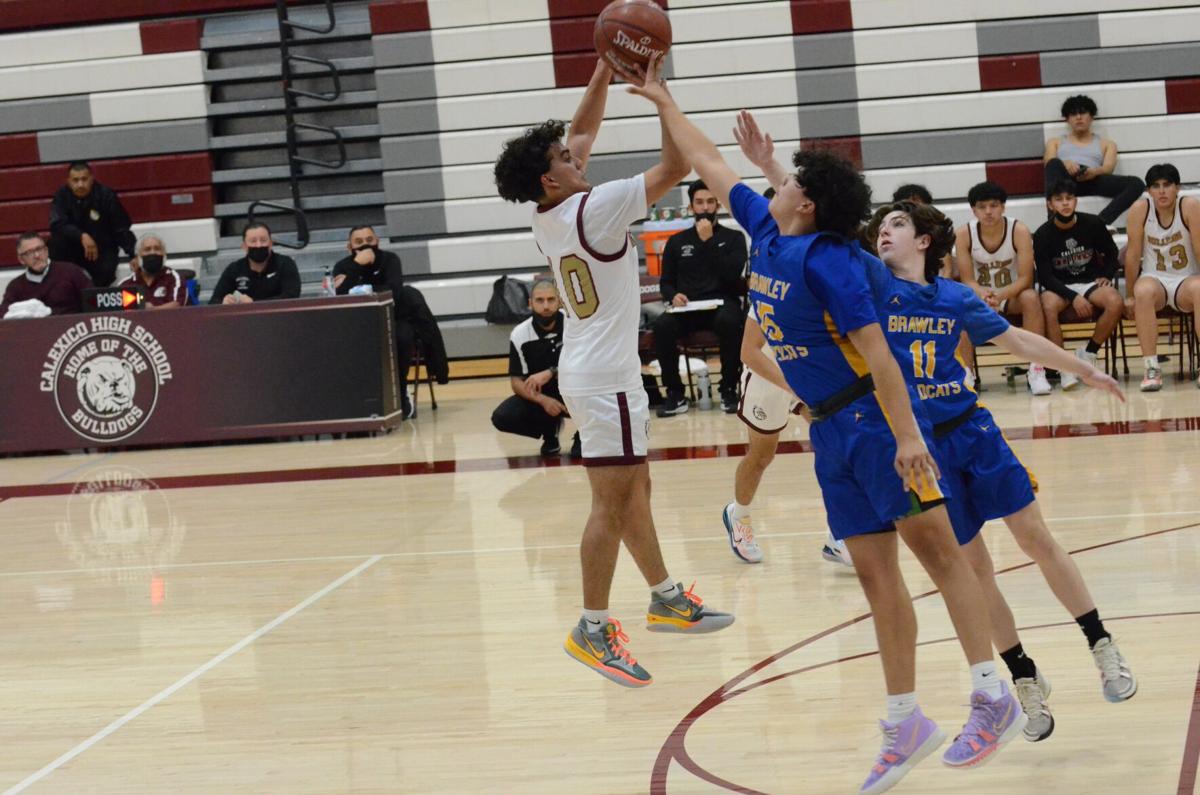 (L) Bulldog guard, Aaron Tabarez, pulls up from the top of the key versus Brawley during IVL conference action in Calexico Tuesday, Jan. 11. 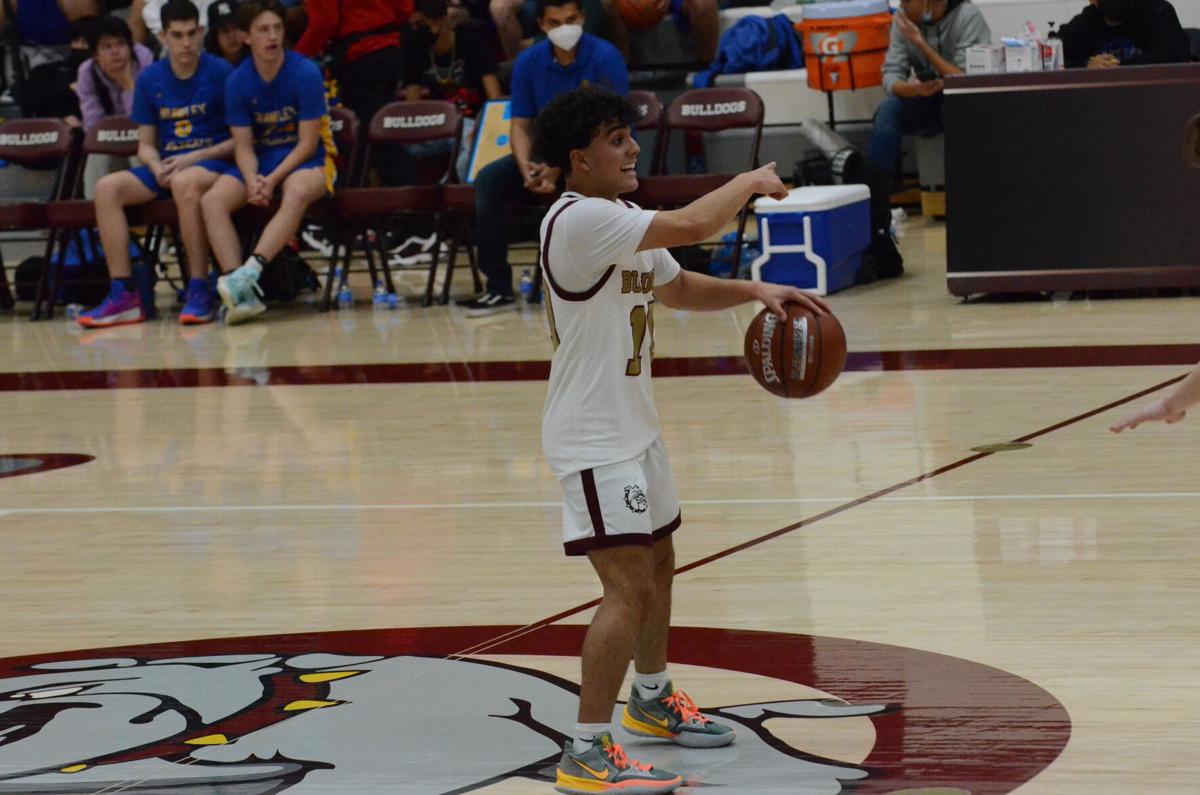 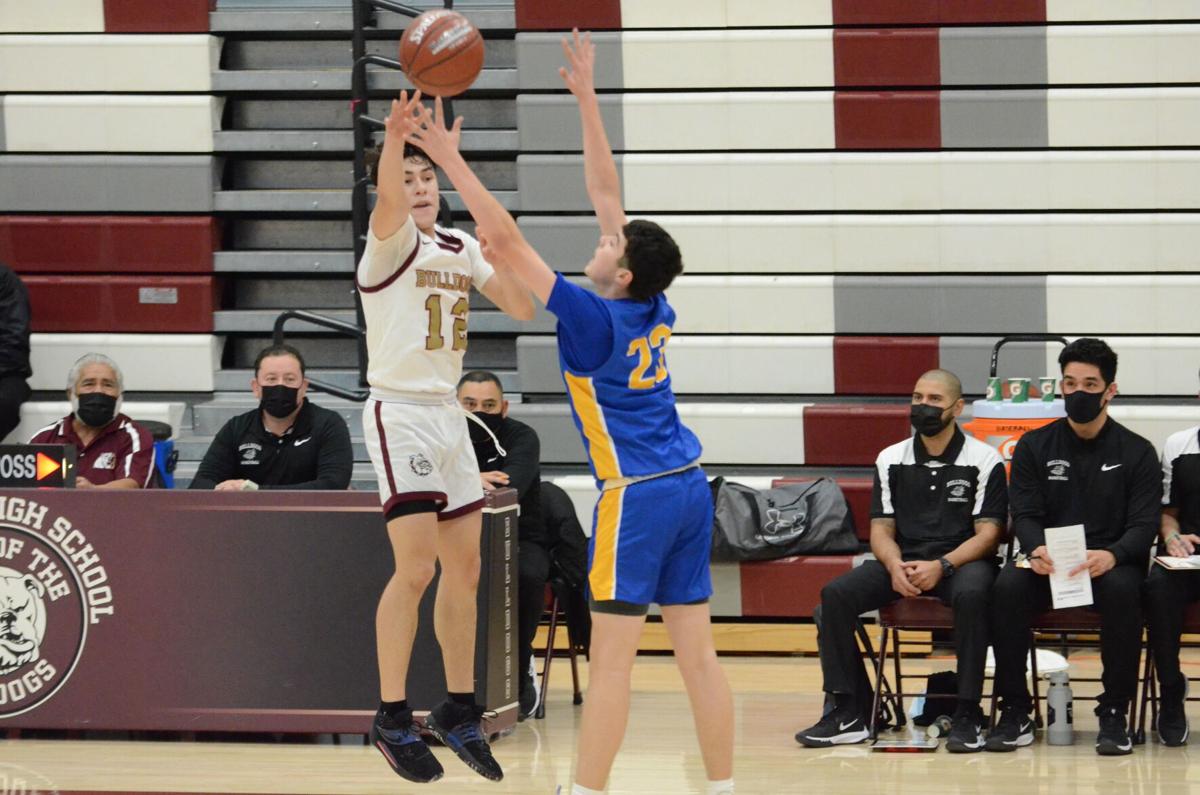 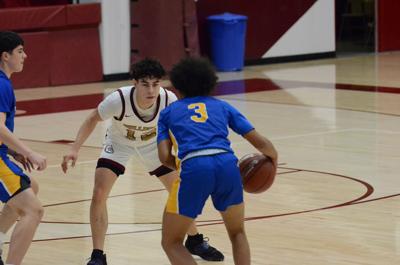 (L) Bulldog guard, Aaron Tabarez, pulls up from the top of the key versus Brawley during IVL conference action in Calexico Tuesday, Jan. 11.

CALEXICO — Calexico High School’s Bulldog basketball returned to ‘the city that shows no pity’ for an Imperial Valley League showdown versus the Brawley Union High School Wildcats Tuesday, Jan. 11, where Calexico crushed the Wildcats, 59-28, in the conference opener.

Following the tip-off, both defensive units forced turnovers and dictated the tempo as the first handful of offensive possessions fell short of the bucket. Brawley opened with a 2-1-2 zone scheme and Calexico came out matching up man-to-man.

Arron Tabarez wet the first net of the night for Calexico with a runner in the lane, which broke the seal a minute-and-a-half into the contest.

Brawley got on the board with 3:38 to go run the opening period by way of a Julian Pintones step-back jump shot from mid-range.

On the first possession of the second period, Tabarez shook off his defender and finished off a euro-step finger roll to cup which extended the Bulldog advantage to 17-5.

The Wildcats responded with a cutting baseline dish and finish initiated by Brody Caston and polished off by Lucas Marmolejo.

Brawley brought the game back to a 10-point margin at 17-7 but then Calexico coalesced for a 12-0 - ignited by back-to-back trey bombs from Castro and Carrasco who locked in from the right wing. Andres Ramirez racked in back-door roll to the cup, Tabarez added back-to-back layups, and Carrasco tacked on a baseline reverse finish which ballooned the Bulldog lead to 31-7 with 1:40 remaining before intermission.

Before time ran out on the first half, Brawley managed to get back on the board at the charity stripe where Pitones knocked down two foul shots. With 19 seconds to go, Jaylin Mack buried a swish from beyond the arc which brought the contest to 31-12, Calexico at the half.

Calexico appeared more poised out of the locker room in the second half as the Bulldog offense moved with more fluidity. The rock swung around the perimeter until a crisp pass from the top of the key to Calexico’s Carrasco ended in ‘Mikan Drill’ baseline lay-in.

Abraham Garcia answered back for Brawley with a driving dish to Pitones who laid in a pump-fake and finish. The scoreboard read 33-14, Bulldogs with 7:04 left in the third quarter.

Following the conceded hoop, Calexico took off on a 10-0 rally.

After Christian Bravo made one of two free throws, Tabarez dropped in five points of his own on a long ball from the right wing proceeded by a mid-range, pull-up jumper. On the very next offensive possession, Tabarez collapsed the defense then hit Bravo on a roll to the paint who made the bucket plus foul shot. With 3:27 to go in the third quarter, Carrasco swished a 12-foot step-back. The Bulldog lead inflated to 44-15.

Brawley momentarily stopped the hemorrhaging when Pitones drove in a layup late in the third period. After giving up an elbow-jumper on the other end, the Wildcats matched buckets with a fast break layup finish by Garcia. Brawley strung two more scores together before the quarter was out, however, the blue and gold could not contain the potent Bulldog offense. Calexico led 50-22 heading onto the final period.

The fourth quarter produced the fewest points of the contest as fatigue began to set in on both units. Calexico’s full-game match defense took its toll on the home team and the opposition as the ball began to stick, and shot volume decreased.

The Wildcats kept the fourth quarter scoring output nearly even at 7-6 Calexico, although the early damage was too severe to overcome.

“We are happy to come out and perform in front of our home crowd,” said Calexico Head Varsity Basketball Coach, Hugo Estrada. It was nice to get out there even though we still had one (player) out. The boys came out and played solid defense, and I’m happy with our win tonight. We always try to preach that our identity, number one, is defense. We strive to be a defensive-minded team and on offense we try to share the ball. We don’t want to stand around too much. We want to keep the ball moving on offense. At times, we settle for outside shots but that something we need to address internally.”