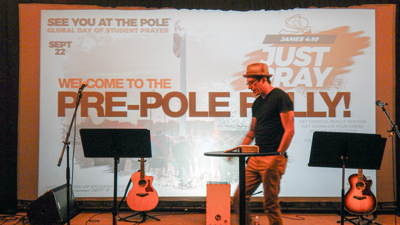 See You at the Pole (SYATP) is a global, student-led prayer movement where students gather around their respective school’s flagpole, typically at 7 a.m., to pray together, according to an Imperial Valley Youth for Christ social media post.

Each year SYATP has a theme, with the SYATP 2021 theme being “Just Pray” based on the Christian scripture passage of James 4:10, said Imperial Valley Youth for Christ (IVYFC) Executive Director Jeremiah Vik.

While the main SYATP prayer rally will be held in the US on Wednesday, Sept. 22, the IVYFC held the Pre-Poll Rally to “generate excitement and create momentum around the prayer meeting next Wednesday,” Vik said.

“This (year’s theme) is the idea of really being serious about prayer, getting down on our knees, and committing to it,” he said. “The idea is we humble ourselves and we pray and come to God and He hears our prayers.”

Teens sang in praise to worship music, led by the Christ Community Church (CCC) Youth Worship Band, and prayed for various intentions, including each high school district within the Imperial Valley as a student from within each district led each prayer.

Youth Pastor Daniel Bisi of Trinity Baptist Church gave a talk to the youth about the importance of prayer and other related points.

CCC El Centro Youth Pastor Cameron Colace said the attendees were comprised of Christian youth groups from all around the Imperial Valley, including Brawley, Holtville, Imperial, and El Centro, “so it’s really cool to have all the youth groups all in one place.”

Colace said the SYATP is important not just for the youth, but for the Christian community at large.

“I think it's really important to have something like that, not just for the students but really all Christians and leaders,” Colace said, “fixing our eyes on Jesus and really getting our attention on him altogether as a group, having the same mindset, and really being in unity.”

“We're living in a day and age where there is a lot of division … in pretty much everything,” he said. “When we gather like this its super important because it gets their minds out of what the world wants it to be, and that is a world of division.”

“When we have something like this, it really helps these students get in that mindset of, 'We're all seeking Jesus together and it doesn't matter what my background is: You're my brother, you're my sister, and I'm praying with you,'” he said.

“What I like is you are seeing such a gathering of different places of worship,” he said.

“If we're going to make a change in this culture, this next generation needs to rise up and see their calling,” said Brandt, who worked in youth ministry for a decade and recently came back to it.

“The 30’s on up have kind of grown cold so these youth need to grow hot so they can start to make a difference and show that there is a true God that works in their lives,” he said. “So, what encourages me is that the youth come together to do something that I think we adults need to look at, (and) truly come and worship.”

Brandt said the youth are more willing to be exposed before God in their sin compared to “when we adults come in there with our Bibles, say ‘Hi there,’ and we’re miserable inside and don’t want to go back and get help.”

“What I enjoy about youth is they’re willing to look to get more help,” Brandt said.

“It’s really cool to see the kids like this. It gives you hope,” he said.

For more information about the upcoming See You at the Pole Rally on Wednesday, Sept. 22, visit syatp.com or contact IVYFC Executive Director Jeremiah Vik at 760-791-6999.

For more information Imperial Valley Youth for Christ and their Campus Life clubs for teens, contact Vik or visit yfc-iv.org.