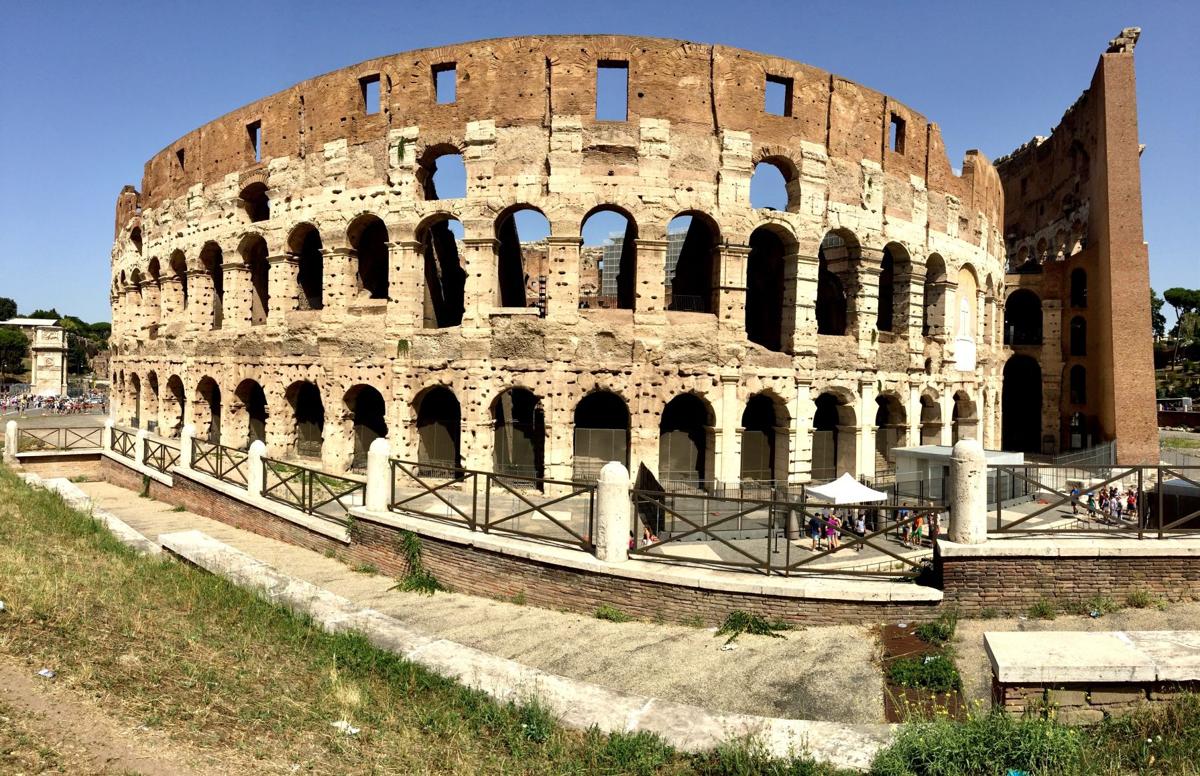 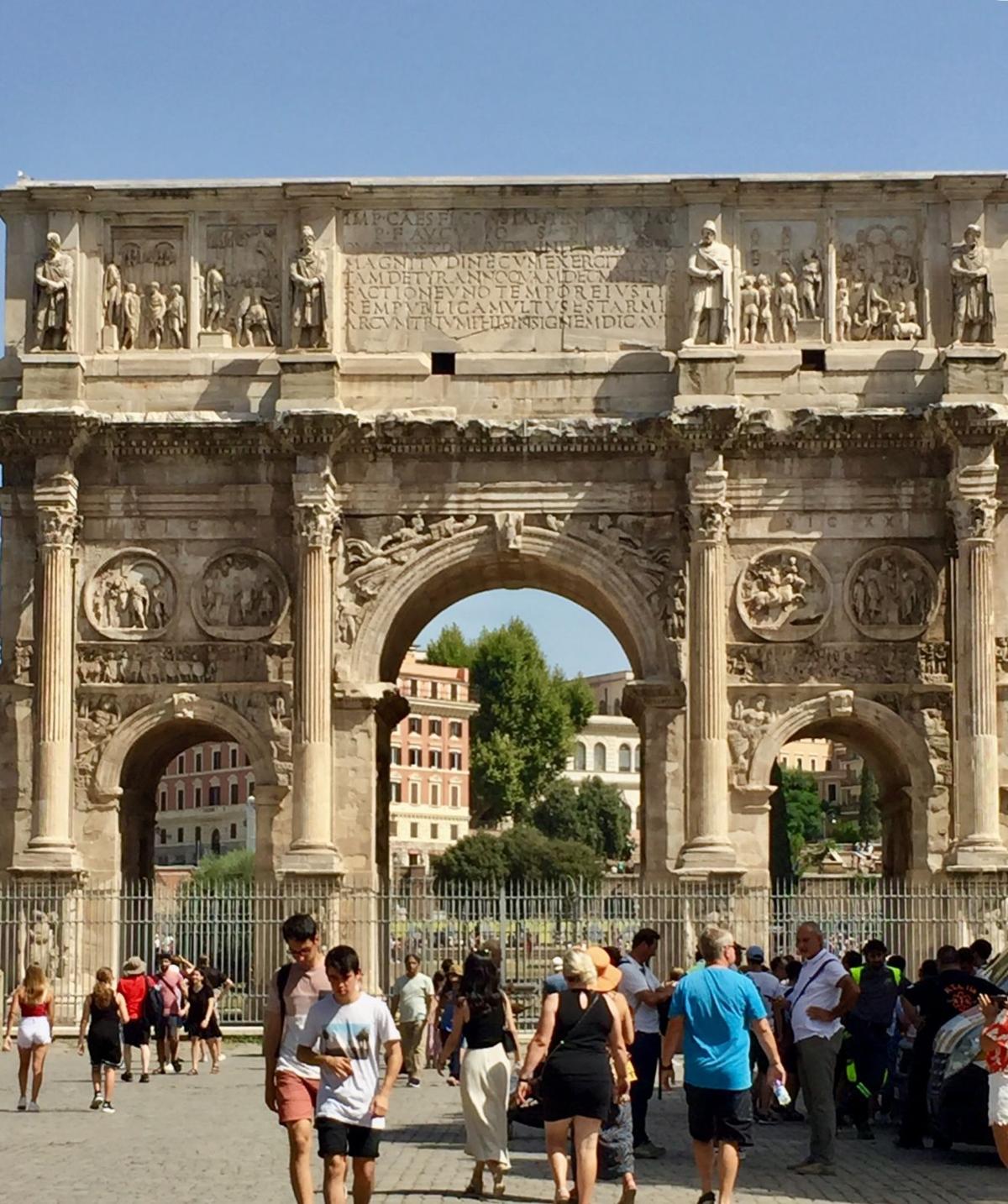 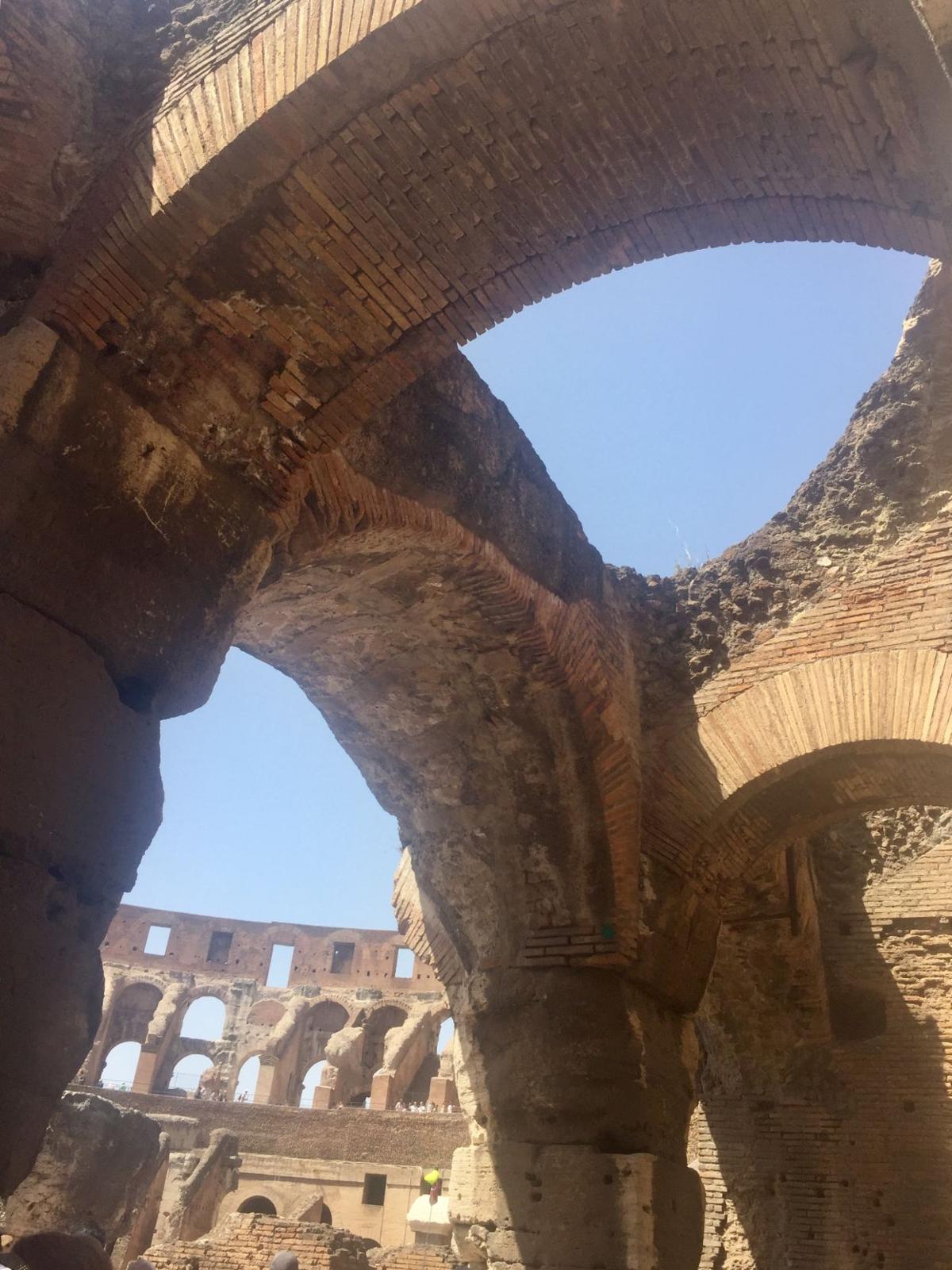 The Arches of the Colosseum 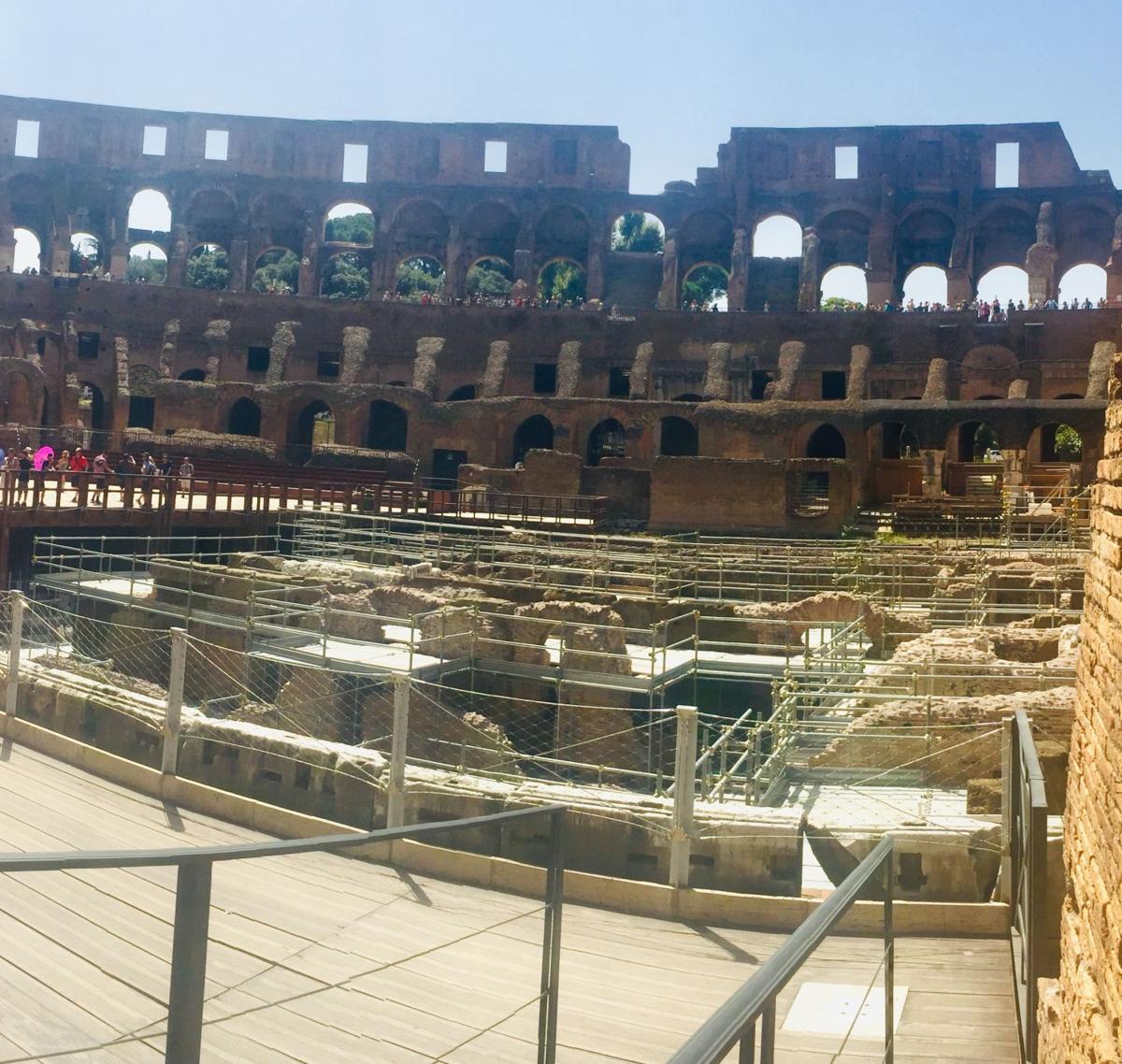 Tunnels under the Colosseum

The Arches of the Colosseum

Tunnels under the Colosseum

After a humbling and exhilarating experience of traveling through the catacomb’s underground labyrinth of tunnels located outside Rome on the Via Appia, we left with a very impressive realization of the dedication of the second century Christians as they preserved and paid homage to their deceased Christian relatives. As they met here in reverence to pray and humble themselves before God, they escaped into silence from the persecution of the Roman government that prevented them from meeting in public places to worship God.

We left the catacombs and drove back to the center of Rome, the heart of the early Roman Empire, where Paul arrived in approximately 60 A.D. We began a walking tour to visit the Colosseum, which at the time Paul arrived, was nothing more than a large ornamental lake excavated for the pleasure of Nero. As he sat on the porch of his palatial home on top of Palatine hill, he enjoyed the beauty of this lake.

Paul left Caesarea on his journey to Rome to stand before Caesar (Nero) to plead his innocence in approximately midsummer 59 A.D. Here we were — in approximately the same season — 1,963 years later in the same city Paul would reach in early 60 A.D. Paul’s trip to Rome was nothing short of one catastrophe after another.

After he ended his third missionary journey, one reads in Acts 27–28:1-10, that Paul and Luke, (the use of the pronoun, we, indicates Luke was with him), other prisoners, an army officer named Julius, a captain of the Imperial Regiment, and Aristarchus were placed on board a ship headed to Rome. The total number of people on board was 276. They set sail for Italy from the port of Adramyttium on the Caicus River in what is today modern Turkey.

Passing through Sidon and Myra, the ship’s officer then found another Egyptian ship from Alexandria that was bound for Italy and all individuals boarded. Many days of rough sailing were encountered, and they finally came near Cnidus. With the wind against them, they sailed down the leeward side of Crete, past the Cape of Salmone, and finally arrived at Fair Havens near the city of Lasea. It was approximately October, 59 A.D., and because of the dangerous winter weather, Paul suggested the trip be postponed. Unwilling to heed Paul’s recommendation, the ship’s captain forged on. As Paul predicted, a typhoon-strength wind caught the ship and blew it out to sea. They couldn’t turn the ship around, so they had to just let it face the gale. They sailed behind a small island named Cauda. The winds continued to badger the ship. The crew began throwing overboard cargo, equipment, and everything on which they could lay their hands. The storm raged for many days, and realizing no one had eaten for the two weeks at sea, Paul called the crew together. He told them not to worry about losing their lives; God sent him an angel the night before to tell him they would all be granted safety. He did, however, inform them they would soon be shipwrecked on an island. Eventually, they did shipwreck on the island of Malta in the Sea of Adria (the central part of the Mediterranean Sea between Italy, Crete and the northern coast of Africa).

When morning dawned, no one recognized the coastline. However, they saw a bay and were able to get between the rocks and safely to shore. The ship had hit a shoal and ran aground, and the bow of the ship was stuck. Concerned the prisoners would escape, the soldiers wanted to kill them. The commanding officer, however, who had by this time gained a great deal of respect for Paul, wanted to spare him and did not allow them to carry out their plan. Everyone was ordered to swim ashore and all escaped safely to land. Everyone received God‘s mercy.

It was three months after the shipwreck in Malta (approximately February, 60 A.D.) that another Alexandrian ship, its first stop was in Syracuse, Sicily, was to set sail for Italy; it was chartered to continue the journey. This voyage was uneventful and eventually the ship sailed into the Bay of Naples; Paul probably saw Mount Vesuvius and the city of Pompeii, unaware that after his death this city would be in ruins! The ship docked in Puteoli and they set out to join the Appian Way. Along the way they stopped at Appii Forum and Tres Tabernae, the Three Taverns. At each of these places, Paul rejoiced when he was met by fellow Christians who greeted him with loving compassion. Paul was taken to Rome, the greatest city he had ever seen, was given private lodging, and placed under house arrest with a soldier guarding him. Paul spent two years in his own rented house as a prisoner in Rome. During this time, he wrote Ephesians, Philippians, Colossians, and Philemon.

Knowing the tremendous trials under which Paul had experienced en route to Rome, and understanding God‘s guidance in his life and purpose in allowing him to go, gave us a better understanding of how easy our life is today. As Christians, when we share the gospel of Christ with others, we do not really appreciate the sacrifices Paul made!

As we stepped off the bus, as we began to walk toward the Colosseum and the Constantine Arch, we reflected upon the grandeur and tremendous impression that Rome must have had on Paul. We were now privileged to see the very city in which he had landed so many, many centuries before, realizing the Colosseum and the Constantine Arch that we were beginning to see was only a lake when Paul saw this same area. We tried to imagine it without these two amazing structures!

The Constantine Arch was erected by the Roman senate in 315 A.D. It stands between Palatine Hill and the Colosseum. It was dedicated to Emperor Caesar Flavias Constantinos for his victory at the Battle of Milvian. It has three archways, a staircase within an arch, measures 68.9 feet high, 84.97 feet wide, and 24.28 feet deep. It’s spectacular to see; we admired the intricate etchings showing soldiers, prisoners, scenes of war, and elaborately carved inscriptions.

The Colosseum was initially known as the “Flavian Amphitheater” and was built in 70 A.D. by Vespasian, the emperor of ancient Rome from 69 to 79 A.D. Unfortunately, he did not live to see the completion of the Colosseum; he died in 79 A.D. When only two stories of the four-story structure had been completed. The Colosseum was inaugurated by Titus in the year 80 A.D. The Colosseum spans 6 acres, and the outer walls of this elliptical arena rise to a little over 170 feet (almost 12 stories high). Around the top, it extends for almost 617 feet and has a width of nearly 512 feet. Viewing this magnificent, colossal structure was awe-inspiring!

Entrances into the arena numbered 80. There were 36 trap doors, two underground levels which were used for the entrances of animals, gladiators, and scenery for various theatrical productions.

The Colosseum was built using over 100,000 slaves who were the product of war spoils during the sack of Jerusalem in 70 A.D. The Colosseum could hold 50,000 spectators at one time in; various levels of seating were constructed to provide “status” seating for spectators attending events. The seats were of marble with those of the senators and the emperors embellished with beautiful colors and designs. The highest level of viewing was designed for women and the poor; they were only allowed to stand.

In 82 A.D., a “hypogeum” was added. This was a sewer and drainage system that was designed as an underground network of canals and cells. This completed the Colosseum as we know it today. The architecture of this engineering marvel of the Roman Empire is virtually unknown now. It certainly manifests the great technological knowledge the Romans had at that time.

Several of the more violent events that took place in the Colosseum were gladiator fights, wild animal hunting, execution of Christians, and other more action-packed games. On a less violent level, there were performances of many mythological legends that were enacted by performers, processions, sacrifices of animals to the gods, and the favorite for all spectators, a reenactment of sea warfare (the Colosseum was actually filled with water, ships, and men with weapons). There were other events that were used to spread propaganda for the Roman empire.

Magnificent arches surround the Colosseum, both inside and out, in an elaborately, exquisitely designed manner! The exterior of the structure was composed of travertine rock hauled from miles away to complete the building of the Colosseum.

Today, the floor of the Colosseum, on which all of these events transpired, is gone. One can only see the underground cells and walkways. Much reconstructive effort is currently being taken by the Roman government to preserve the structural component of the underground section of the Colosseum. We were not able to walk down into this labyrinth, but could see the scaffolding used to substantially support the original design.

By the third century, the Colosseum had begun to lose its stature. Cultural changes, weakening economy, and the decreasing political stability of the Roman Empire caused it to fall into a state of disrepair. It was made into a quarry, many parts of the Colosseum were torn down, and the rock was used to build other buildings. Additionally, lightning strikes and earthquakes caused major damage to the grandeur of this building. It wasn’t until the 19th century that restoration attempts began. In 1992, sincere attempts to continue restoring the Colosseum were started. Because of these restoration projects, more than four million visitors each year enjoy a structure that has stood the test of time, admire the durability of its building materials, marvel at the architectural design and superiority of its construction techniques, and gain a tremendous admiration for the skills of the early architects/craftsmen/artists/laborers who built this first century wonder of the world!