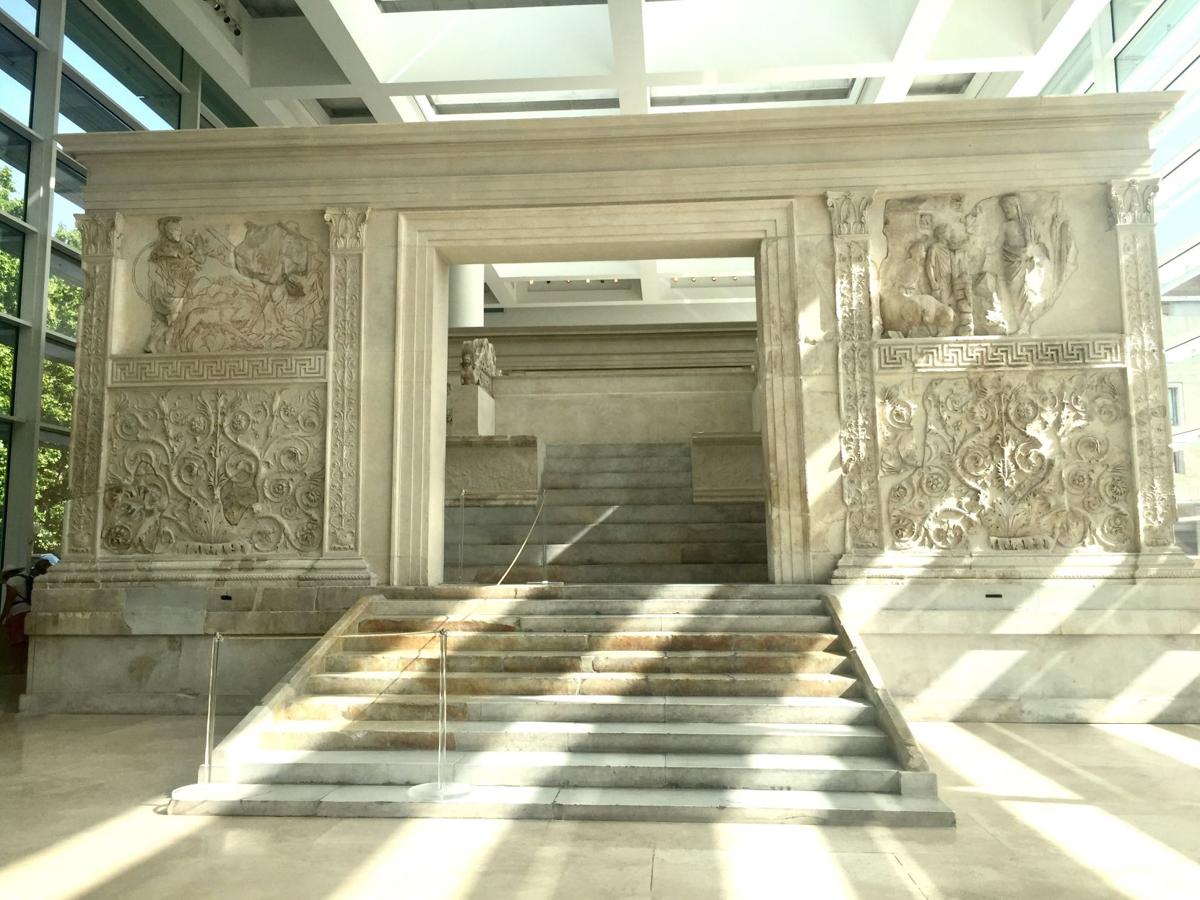 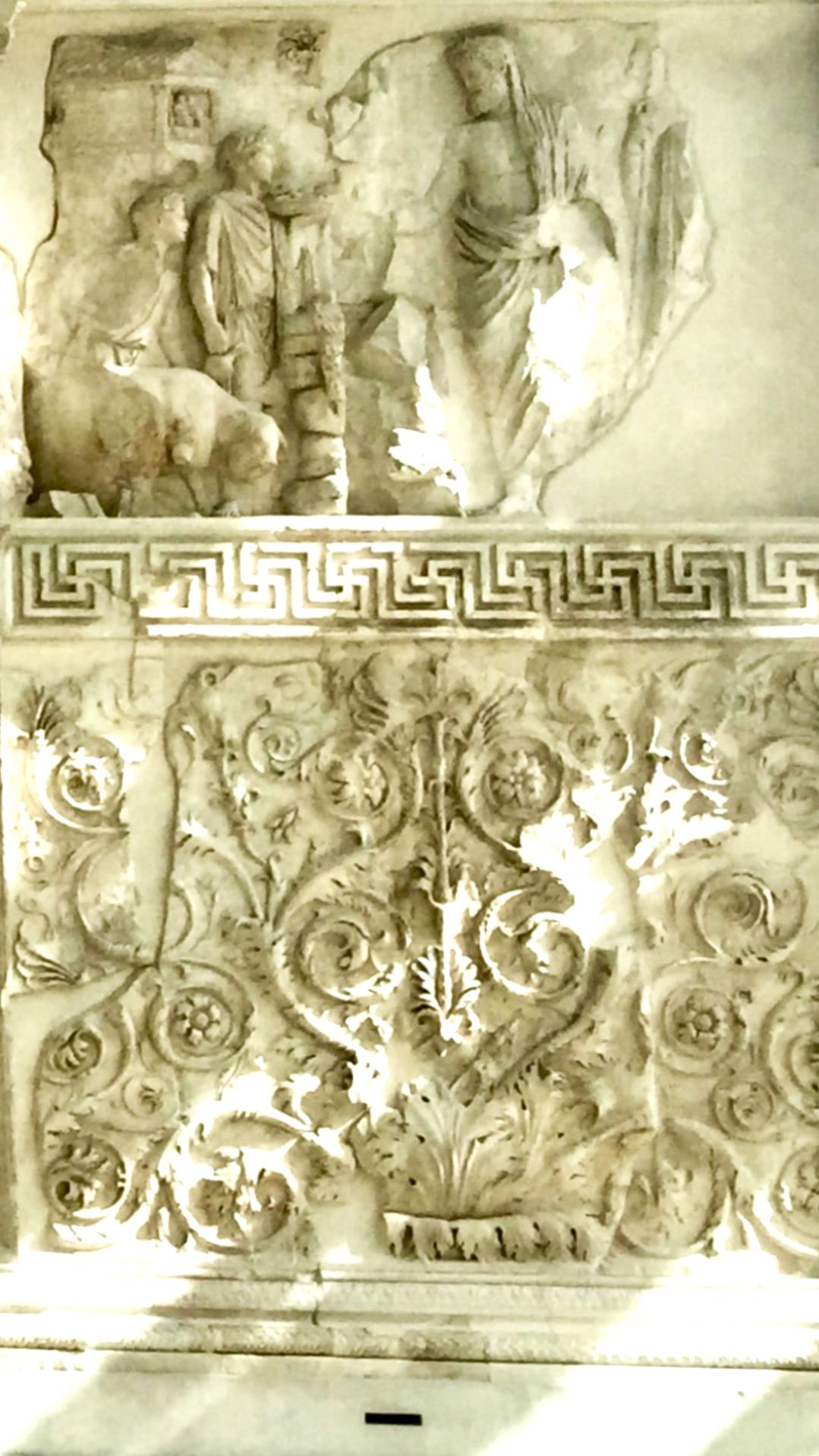 A frieze on side of altar 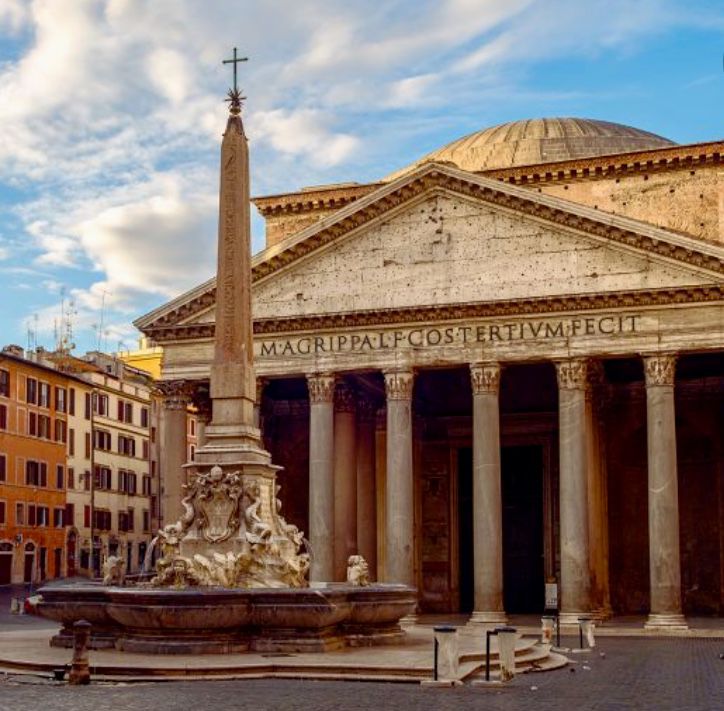 Pantheon with fountain in front

The last two days in Rome were spent visiting some of the interesting tourist attractions in this ancient city.

Our first stop was to visit the “Ara Pacis Museum.” This is an archaeological museum, which houses an altar that was dedicated to the Roman peace goddess, Pax. This altar was originally located on the northern outskirts of Rome and was built in the flood plain of the Tiber River. This location later proved to be a devastating fact in its demise!

The construction of this altar was commissioned by the Roman Senate on July 4, 13 B.C. and was consecrated on January 30, 9 B.C. to honor Augustus‘s military return to Rome after a three year military campaign in Hispania (present day Iberian Peninsula) and Gaul (present day France, Belgium, Luxemburg, parts of the Netherlands, Switzerland and Germany, as well as the west bank of the Rhine and the Po Valley in Italy).

It was in the second century A.D., that the Tiber river overflowed and buried half of the altar in silt; then in medieval times it was completely buried and forgotten. In the 14th century, the “Via Lucina Palace” (a residence for cardinals) was built over it.

When the renovation of the palace was done in 1859, fragments of the altar were discovered. There had also been other partial fragments found in various places down Tiber, after it overflowed hundreds of years before. Many of these pieces had been used for decorative walls and panels. By the time all these fragments were located and gathered together in one place, it was deemed that a reconstruction project be completed. However, this did not happen until between 1918 and 1921! Then, by 1937, when all the remaining fragments from under the palace had been recovered, the altar was re-assembled and placed in its current location. Over the past several decades, there have been many changes in the exterior of the museum itself that houses the altar. The present-day museum we visited was completed in 2013.

The altar stands in the middle of open-air walls that displays many friezes depicting: the senate, sacrifices being performed, scenes of the royal family, priests, Roman soldiers, women and children in processions, and members of individual priestly colleges. There are stairs on both the east and west ends of the walls that provide an entrance to the altar, which is made of luna marble.

A short 10 minute walk from the Ara Pacis Museum, is the Pantheon, our second stop for the day.

This best preserved of all ancient Roman buildings, is made of bricks and concrete, was built somewhere between 113 and 125 A.D. and was dedicated between 126 and 128 A.D. The certainty of these exact dates cannot be verified. It stands 142 feet high and has 3 sections:

1. A cylindrical portico (porch) with eight granite columns in the front, and two groups of four columns behind.

2. A massive dome, also 142 feet in diameter, with a central opening that is 27 feet wide that lets in both light and rain!

3. A rectangular area that connects these two features.

It is truly amazing that after 2000 years of its construction, this dome remains the world’s largest, unreinforced, concrete dome. This amazing building has been in continuous use as a Catholic church, since its later seventh century dedication. Placed in front of the Pantheon is a very large fountain called, “Fontana Del Pantheon.”

The present site where the Pantheon is constructed was the site of an earlier temple that was commissioned by Marcus Agrippa during his reign between 27 and 14 B.C. It was possibly built on his own campus beside three other buildings, with this structure being his own private temple. There was a fire in 80 A.D. that destroyed Agrippa’s Temple; it was then reconstructed by emperor Domitian. Unfortunately, in 110 A.D. another fire destroyed this second temple! Emperor Hadrian, who came into power and ruled between 117 and 138 A.D., had his architectural crew re-construct the temple again. He had his crew put the original inscription of Agrippa on the walls of the building. It was in this building that Hadrian sometimes held court.

Today, the Pantheon is a Catholic church, “St. Mary and the Martyrs.” It was given to Pope Boniface IV by the Byzantine Emperor Procas in 609 A.D. at which time it was dedicated for its present use. Today, it is state owned and managed by the “Ministry of Cultural Heritage and Activities and Tourism.”

There are many questions about the Pantheon’s name itself. Sources (Zieglar, Godfrey, Hemsoll) suggest its name is because of its vaulted ceiling that resembles the heavens. The name could come from the many gods‘ statues placed around the building. It was a nickname. There is no mention of the name in early writings. The explanation of its original name has been lost. The claim that it was a temple for worship of many gods is relatively unreliable since the inscription on the Parthenon says, “Pantheum” NOT “Aedes Panthei” (temple of all gods) and the word, “pantheum” can also refer to individual deities and was the wording used on the original inscription of the temple.”

It truly may not have been a temple to many gods. One writer, Ziolkowski, claims it was originally called, “Temple of Mars.“

It is also declared by historian Levy, “ It was decreed that temple buildings should only be dedicated to single divinities, so that it would be clear who would be offended if, for example, the building were struck by lightning, and because it was only appropriate to offer a sacrifice to a specific deity.”

Several monarchs are buried here as well as Renaissance figures such as artist, Rafael; composer, Corelli; and architect, Peruzzi.

It is truly remarkable to recognize the astute architectural accomplishments, constructive feats, and measure of excellence in design that existed so many hundreds of years ago. Today, we reap these benefits and enjoy these phenomenal buildings!

Next week, I will conclude reporting on additional sites we visited on day two and explain some of the features we saw at the Vatican Museum, Sistine Chapel, and Saint Peters Square.