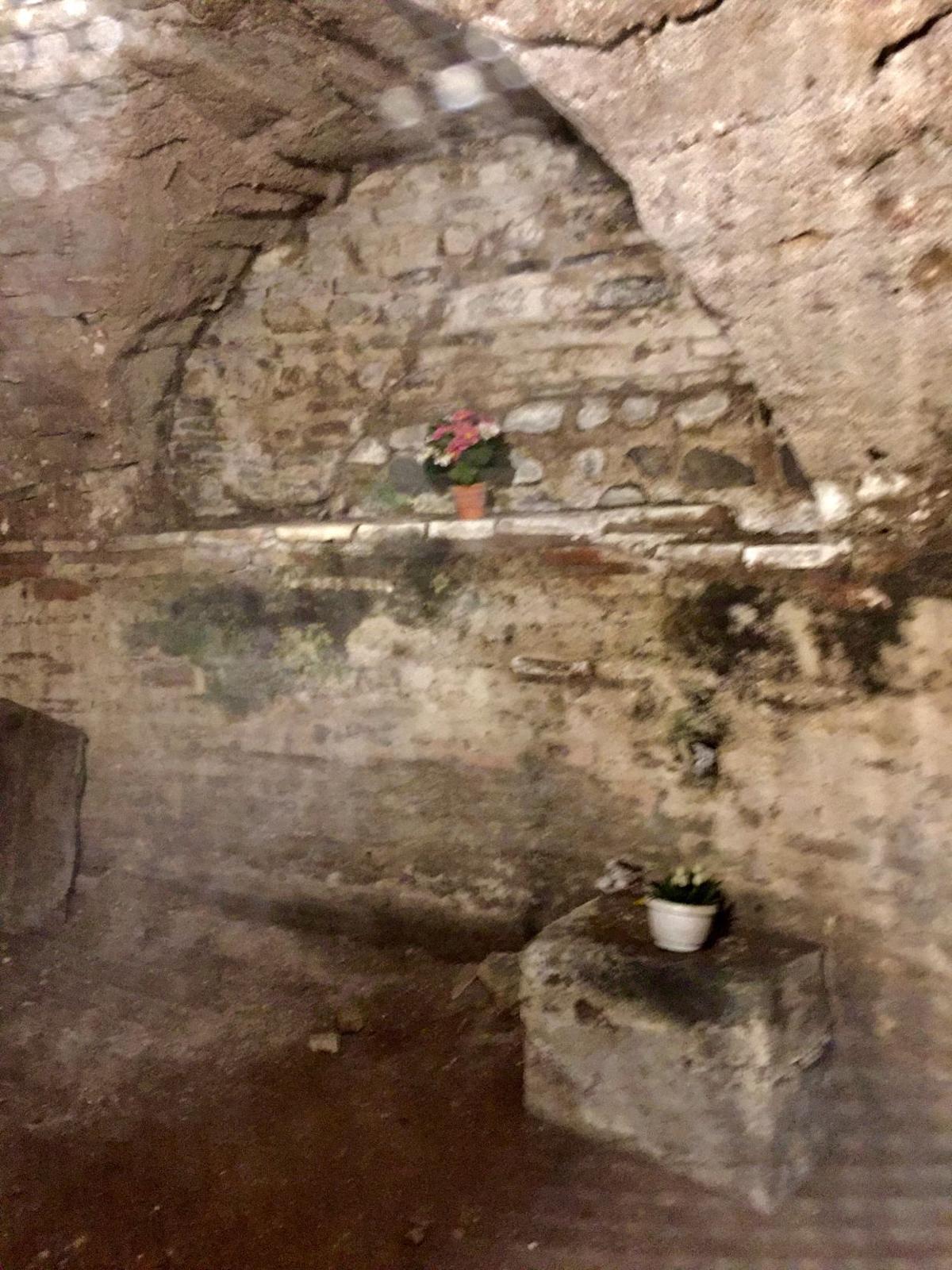 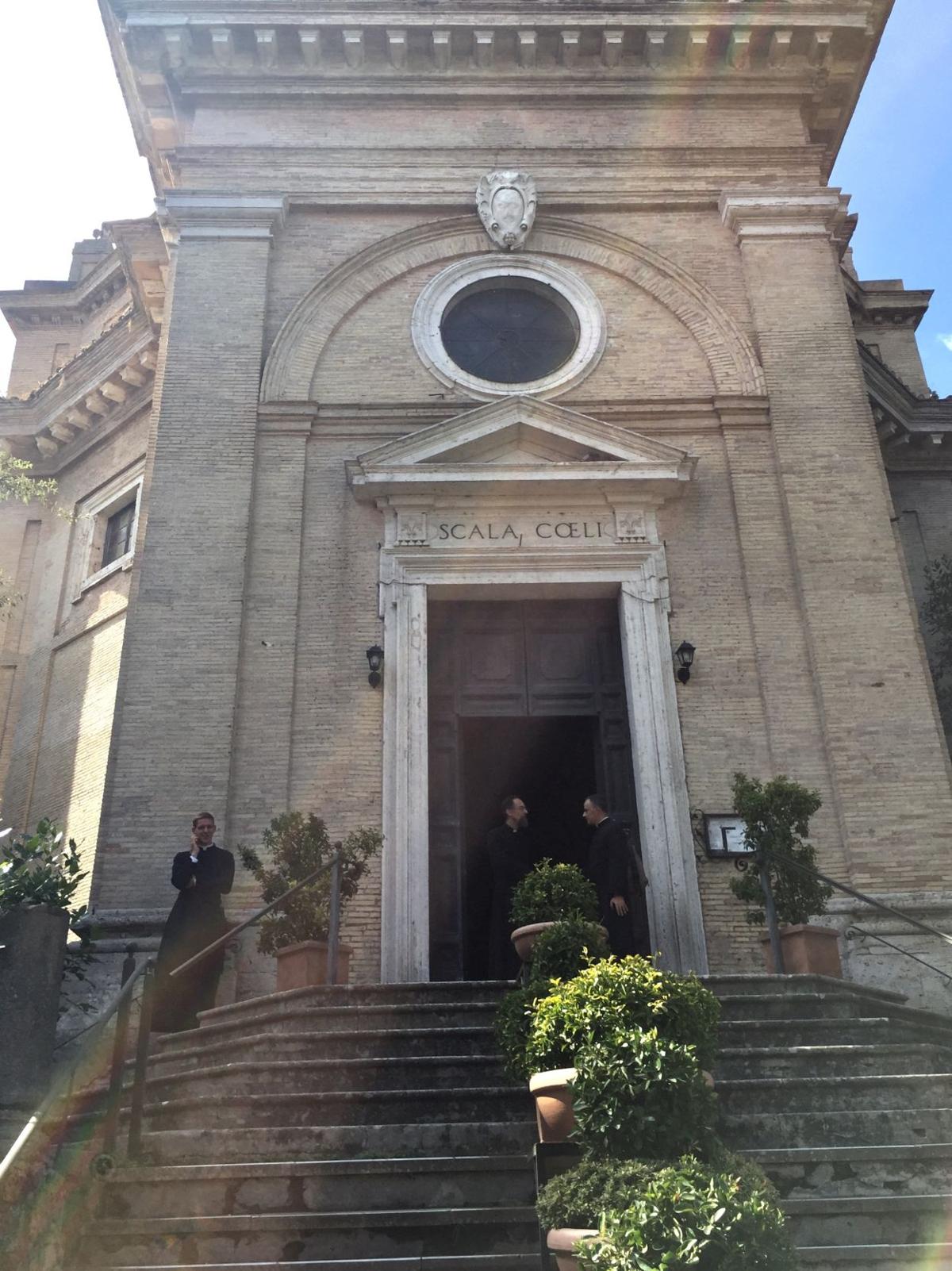 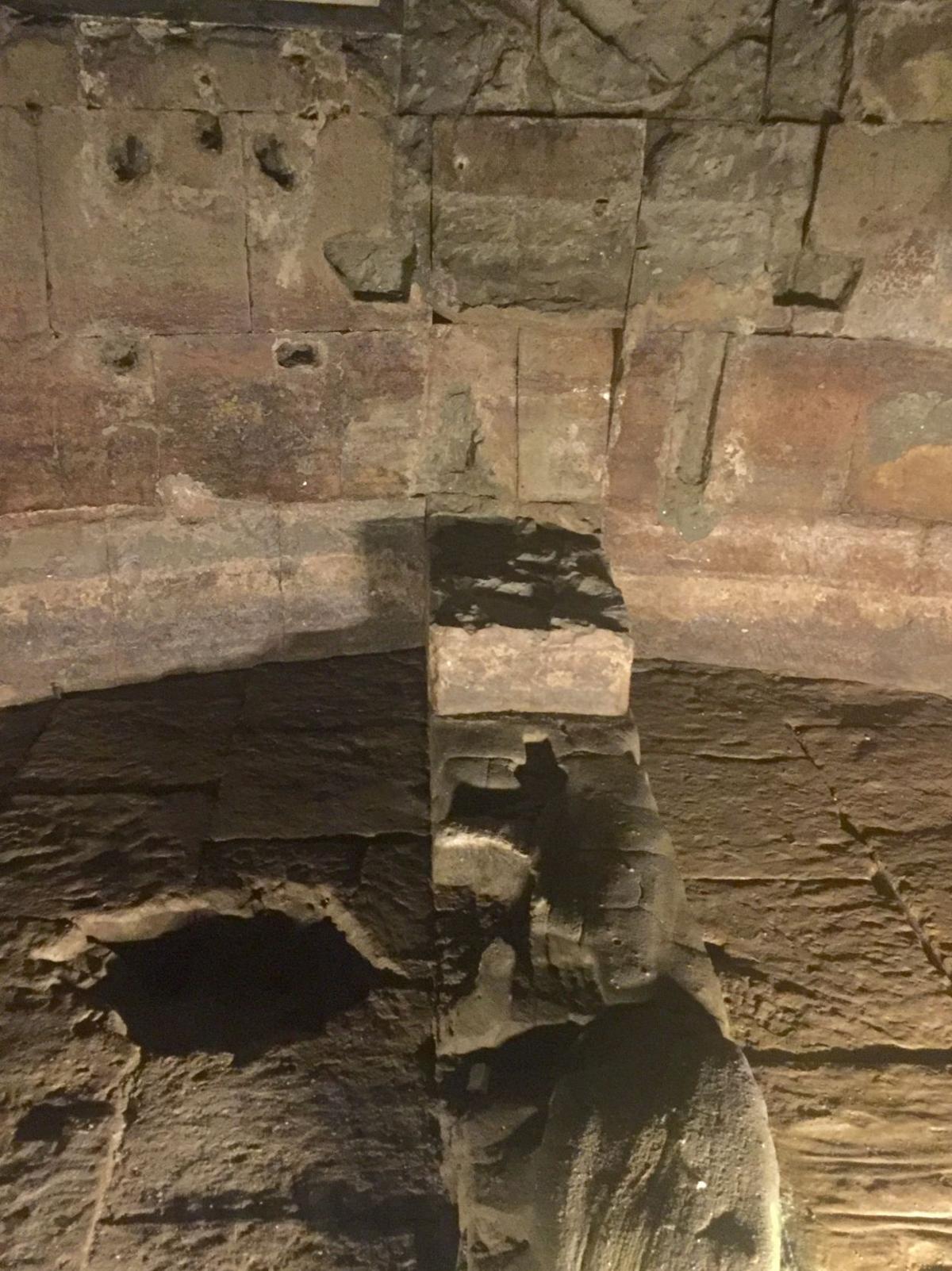 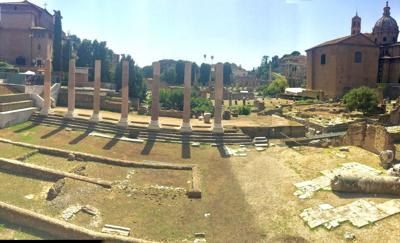 When we completed the tour of the “Parco Archeologico de Colosseo” August 12, it was late afternoon but we still had one more stop. We walked a short distance to the Mamertine Prison, which was constructed between 640-616 B.C. during the reign of Rome’s fourth king, Ancus Marcius. The prison, called Tullianum at that time, was used primarily for short-term incarcerations before scheduled executions. The prison was located just a short distance from the Capitoline Hill (one of the seven hills in Rome at the edge of the archaeological park) and faced three of the Forums in the Park, Nerva, Vespasian, and Augustus.

According to tradition, the prison was originally created as a cistern for a spring that flowed in the lower, second level. This second level floor would eventually become a cell when it was converted into a jail. Two different cells were created, one on top of the other with an entrance to the lower cell being nothing more than a small opening leading to the second floor from the upper cell. Prisoners were lowered through this opening into the lower dungeon.

During his house arrest, he wrote four prison epistles to the Colossians, Ephesians, and Philippians, encouraging and reprimanding the churches he had established on his second missionary journey. The fourth epistle was to Philemon, a personal letter to his friend. One can see in these letters, his first and foremost allegiance was to Christ.

Historical sources show Paul was released from his house arrest, received revelation from God, and wrote First and Second Timothy, Titus, and possibly Hebrews. The authorship of Hebrews is uncertain, but it is clearly written by someone that was closely associated with Paul’s ministry. There is great debate as to what transpired in those years before he was re-arrested sometime between 66-67 A.D.

According to writings by John Pollock and other contemporary theologians (F.F. Bruce, John MacArthur, L. Craig Martindale), they surmise, “He may have gone to Spain as he had planned when writing (the book of) Romans. Clement of Rome, in his letter to the Corinthians 30 years later, said Paul ‘reached the farthest bounds of the west.’ Clement must have known Paul, but the phrase is vague. It could mean he evangelized as far as Cadiz, the gate of the west, and looked out across the Atlantic, or that he evangelized the Celts: Christianity penetrated very early deep into Gaul up the Valley of the Rhône, but no local tradition mentions Paul, nor can a shred of reliable evidence support the romance of Paul landing in Britain.”

“The belief that he went to Spain was held firmly by several of the early fathers, although there is no local tradition since he had intended to evangelize Spain and the province of Asia. His time there could have stretched nearly to two years. Then he was back in the eastern Mediterranean with Titus in Crete, with Timothy in Ephesus and if possible, he found his way up the Meander and Lycus valleys to enjoy Philemon’s guest home at Colossae, served by a delighted Onesimus. In his letters to Timothy and Titus, Paul mentioned being in Miletus and revealed his plan to spend a winter in Nicopolis in the Epirus of western Greece. The picture at this point, is of constant movement rather than settled work, though slower, as if bones were old and rheumatism and arthritis were catching up. And he was slower too in his style of writing.”

It was in 64 A.D. the great fire in Rome caused Caesar to begin the persecution of the Christians. He blamed them for the fire and Paul was arrested for the last time probably in the summer of 66 A.D. He was placed in confinement and probably was among the felons in the Mamertine Prison.

Tradition believes that he was acquitted of arson but was remanded by the Roman Senate for propagating a forbidden cult. This was a capital charge because it was treason against the “divine emperor.”

The ancient tradition of Paul’s execution site is almost certainly accurate. However, the details cannot be confirmed. It was customary for criminals to be marched on the “Ostian Way” to an area known as, “Aquae Salviae” (healing waters). Today it is called, “Tre Fontane.”

It was August 14, two days after we visited the Mamertine prison, our group was privileged to visit this sacred site. Three churches have been built as part of an abbey complex at the traditional execution site. One of the churches inside this complex is a present-day Catholic Church, “Scala Coeli,” which was refurbished in 1582 and remains under the auspices of the Catholic Church. It is assumed this church was built over the site where Paul was imprisoned the last time.

An early claim believes Paul was placed in a small cell for the night and executed the next day, however, he could have been held nine months. The date honored in the city of Rome for his martyrdom is June 29, 67 A.D. Tradition has it that Simon Peter and Paul were in the prison together and executed on the same day.

Based on the protocol for executions of the day, Paul was stripped to the waist, tied, forced to kneel upright, bent over on a low pillar leaving his neck free. The executioner stood ready and was stark naked! Some accounts say the lictors beat him with a rod - the usual prelude to beheadings.

As I reflect on what Paul’s feelings must have been, I can’t help but think he was singing as he did when he was a prisoner in Philippi, “as sorrowful yet always rejoicing; as dying and, behold, we live.” (Second Corinthians 6:9)