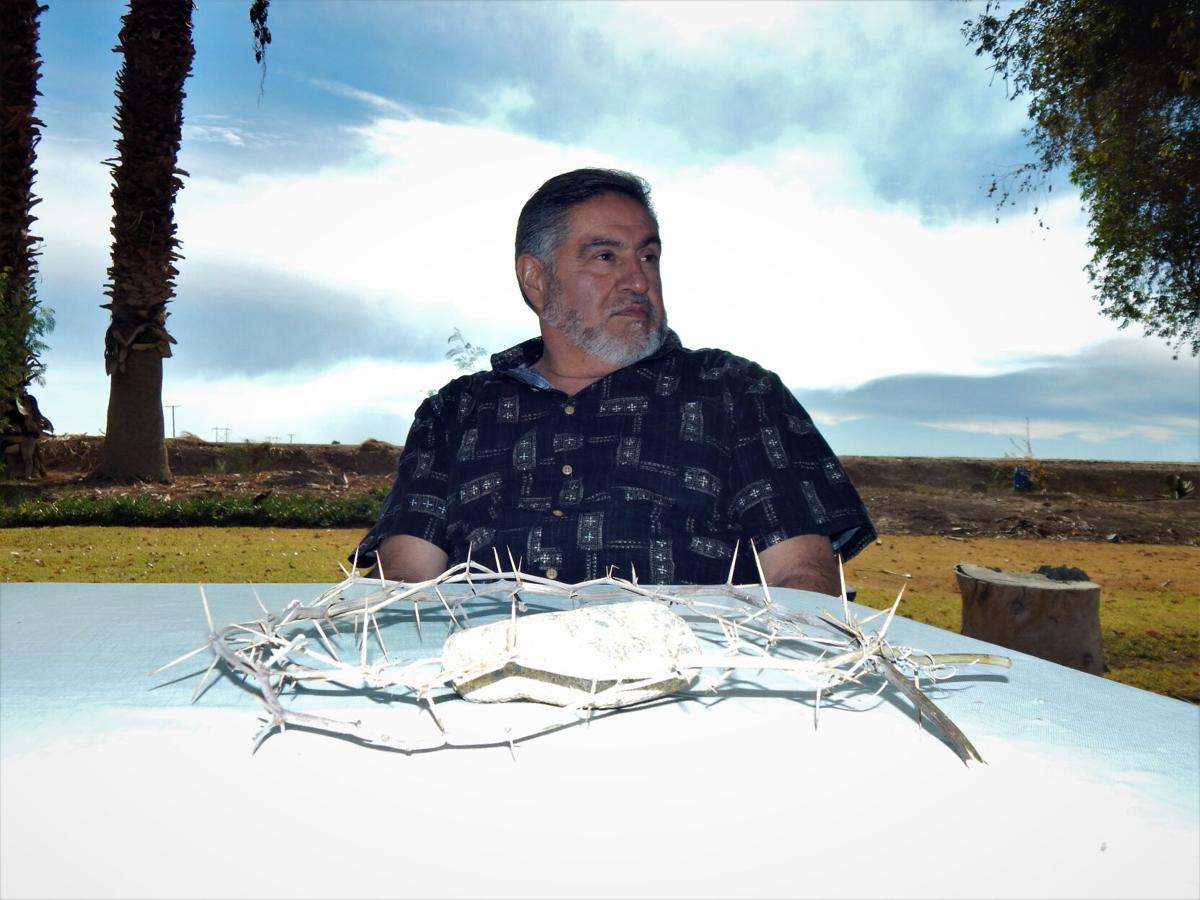 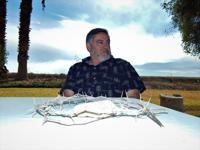 Deacon Marcos Lopez at his home, Dec. 11, in Imperial. 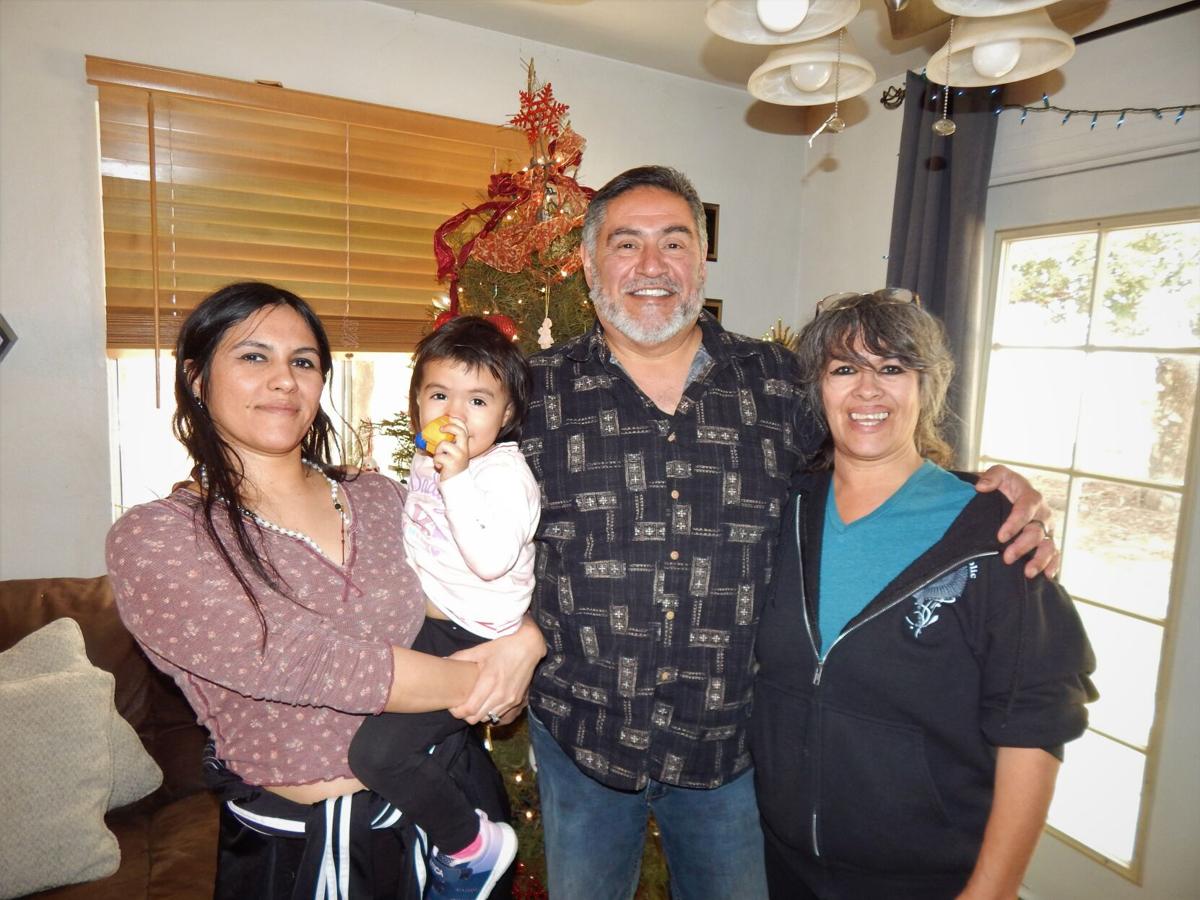 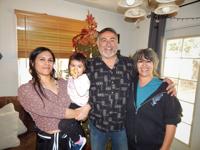 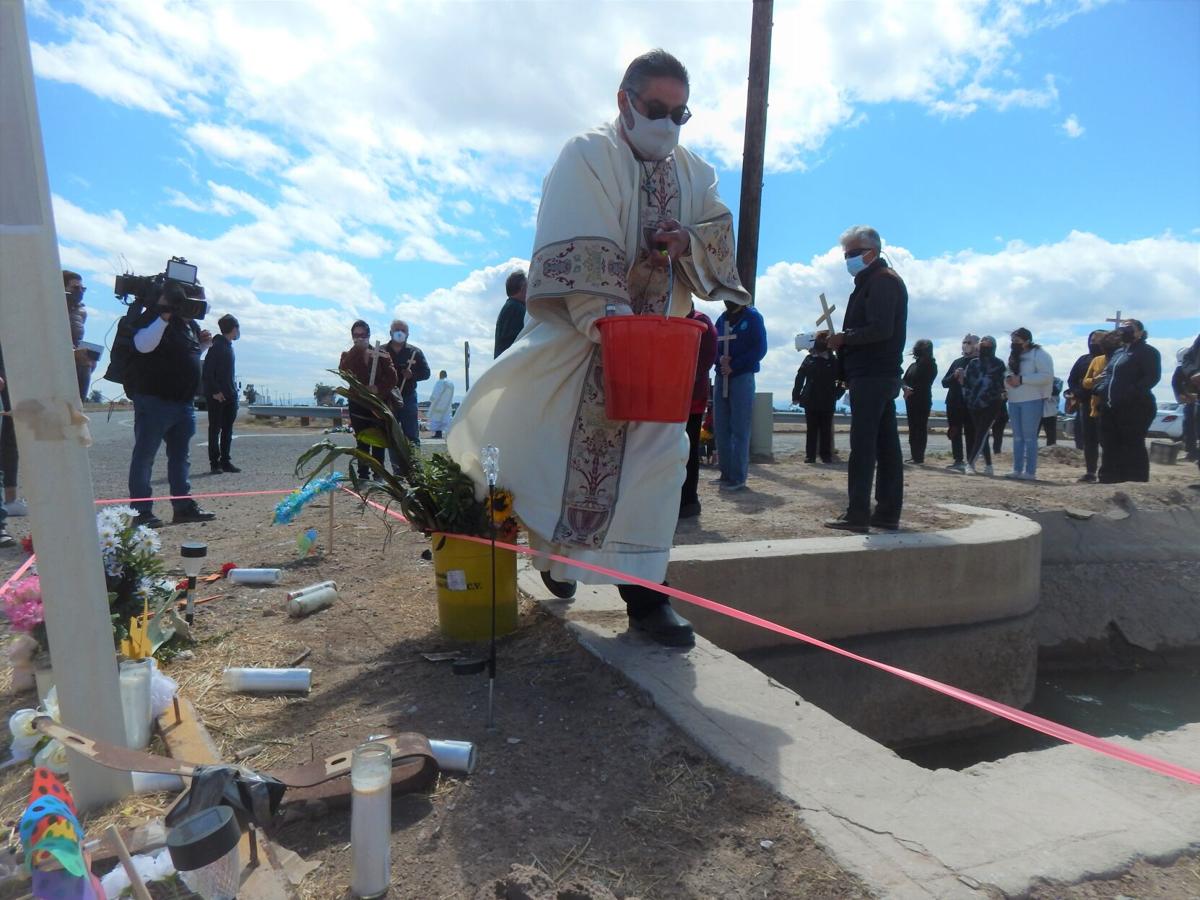 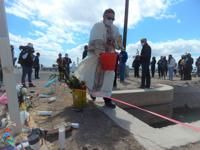 Deacon Marcos Lopez (center) walks on a canal bank to bless the crash site of an accident that claimed the lives of immigrants during a memorial service, held March 10, in Holtville. 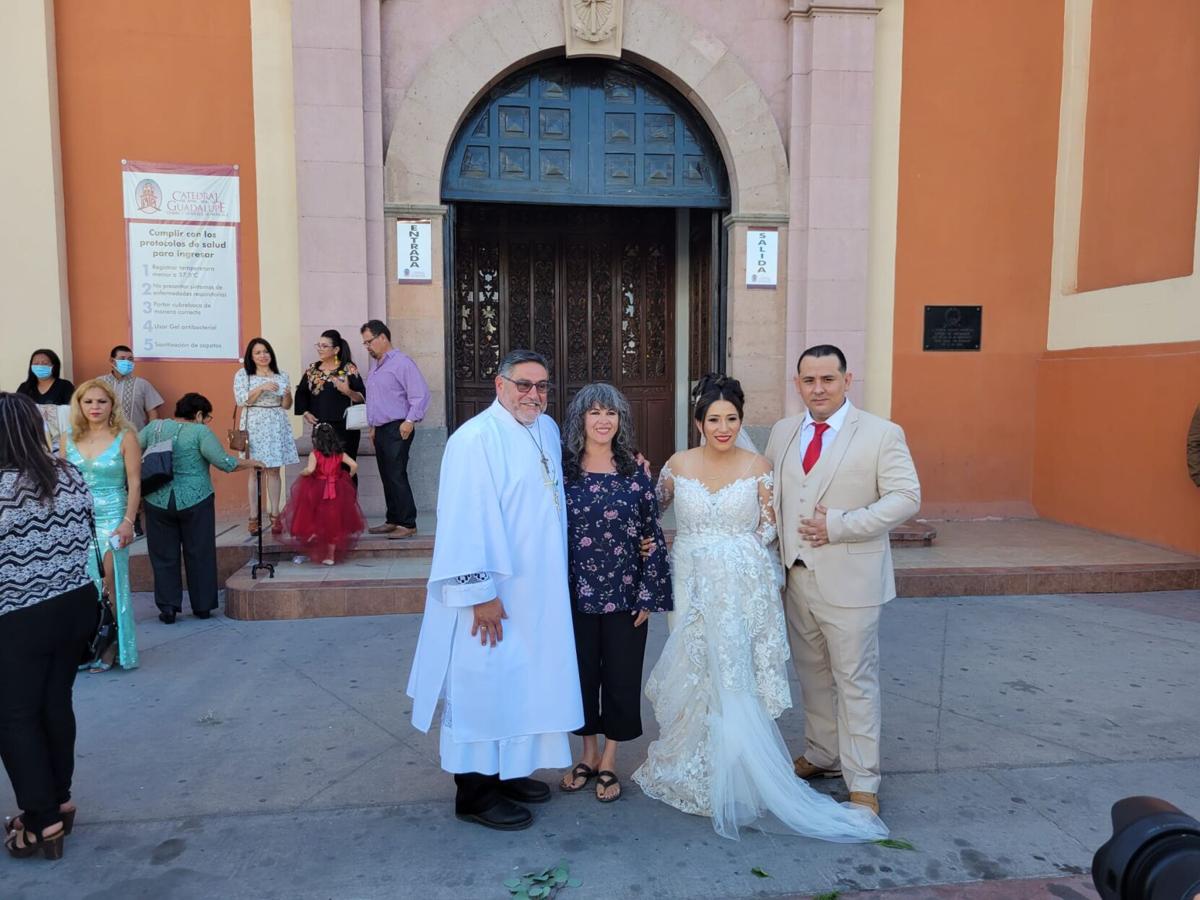 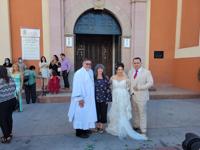 Deacon Marcos Lopez at his home, Dec. 11, in Imperial.

Deacon Marcos Lopez (center) walks on a canal bank to bless the crash site of an accident that claimed the lives of immigrants during a memorial service, held March 10, in Holtville.

IMPERIAL VALLEY — When Imperial resident and Brawley Catholic Deacon Marcos Lopez heard the call to service, for years he thought it was for his son. When he realized — through the help of his pastor — that the call was for him, it not only changed his life but would change the lives of many others.

In the mid-2000s, Lopez didn’t know his “yes” to God’s plan would lead to helping countless incarcerated people in desperate need of Christ, as well as the good work his nonprofit ministry — The Lay Brothers of the Poor (previously known as the Lay Brothers of Mother Teresa) — has been doing since the mid-1990s, bringing help to orphanages and the less fortunate who live in city garbage dumps in Mexicali.

In his own ways, Lopez has lived out Christ’s commands — what Catholics call the Corporal works of Mercy — of feeding the hungry, giving drink to the thirsty, clothing the naked, sheltering travelers, visiting the sick, visiting the imprisoned, and burying the dead, without many knowing about all the work he does as a deacon or has done in his prison and Lay Brothers ministry works.

“Well, it wasn’t my idea; it was God’s idea, I guess,” Lopez said of why he wanted to become a deacon. “For many, many years I would hear a call to be a priest and I said the call was not for me, it’s got to be for my son, because I was already married with two kids.”

Lopez said his then-pastor, Fr. David Sereno, called him into his office and asked if he had ever considered being a deacon, “and I said, ‘Oh,’” making sense of the call he had been hearing from God for more than 20 years.

“For all those years I prayed for my son. I said, ‘Lord if you want my son to be a priest, he’s all Yours.’ That was my daily prayer,” Lopez said. “And after I got the call I said, ‘Well if it’s me you want, then of course. I’m here to serve.’”

Since being ordained into the Deaconate of the Catholic Church on June 7, 2013, Lopez has both led and trained others to engage in prison ministries throughout the Imperial Valley in coordination with Centinela State Prison in Imperial, Imperial County Detention Center, the US Marshals’ detention facility in El Centro, and the Imperial Regional Detention Facility in Calexico.

In Centinela alone, Lopez and his volunteers minister to 100 to 125 inmates each week.

“The main objective would be to take to them the Sunday scripture readings and give them the Holy Eucharist,” Lopez said.

“If a priest would go with me, we would do the Mass. If not, I would give a Communion Service,” he said. “The inmates would set up the chapel and then they would pray the rosary while I would do counseling (with them). In some of the chapels we had real good choirs too, so we'd get to do a lot of singing.”

After retiring from his main post at Centinela in December 2020 due to the facility shutting down their ministry services due to the COVID pandemic, Lopez began serving in the Brawley Catholic churches of St. Margaret Mary and Sacred Heart in regular deacon duties, such as conducting Baptisms, funeral services, assisting in holy Mass, and other duties as assigned.

And Lopez does all this good work despite the very public and tragic loss of his son, Marcos Humberto, due to a fatal motorcycle accident at the age of 21, just one year into the five-year program to become a deacon in the Diocese of San Diego, which the Imperial Valley falls under in the Catholic Church.

Lopez, a father of two and grandfather through his daughter Zabanna, said the loss of his son didn’t shake his and his wife Corina’s faith, but it pushed him to serve more.

“We didn’t shut down, we actually kept going forward. I think it actually made our faith stronger,” he said. “Just like King David said, my son has left this world and I have to go where he’s at. My son is actually an example for a lot of us (in) the things he did.”

One of those things was engaging in the family-founded Lay Brothers ministry, which Lopez and his wife founded.

Lopez said after finishing the deaconate program in 2013 he was offered the Chaplain position at Centinela, probably in part to his 20-plus years of experience working in County Probation, including drug and alcohol counseling.

“I had just turned 50 (years old) when I got ordained, and at 50 you can retire from law enforcement,” Lopez said, “so I said it’s time for a change for me.”

Lopez said he liked working in prison ministry because the inmates were very open, telling him their stories, “how they messed up along the way, and how they want to change and follow The Lord now.”

“A lot of the guys in prison were there because they were using drugs or something that made them do a major screw up, and they repented for their crime, and that's one thing that really called my attention: The way they are very remorseful for their past,” he said.

Lopez also marvels at the fact that, through his years teaching civics and migrant workers toward US citizenship, God used his previous experiences in ways that were new and different to Lopez, utilizing his probation experience for prison ministry and Rodino education program work with migrants to aide those in detention facilities.

Lopez said inmates and incarcerated migrants open up to him frequently. Father David Sereno, Lopez’s former pastor at St. Anthony of Padua Church in Imperial, said that is because Lopez has always been a trustworthy person since he is transparent and “builds bridges between people rather than walls.”

“The people seemed to have a sense that he was a unifying factor,” Fr. Sereno said. “The vast majority of the people looked at him in a non-conflictive way, so he was kind of like a peacemaker.”

“That's what I think is good in a position like a deacon,” Sereno said. “If it’s going to be a person for the parochial community then that’s the type of person you’re going to have to look for … people who are going to be peacemakers by implanting the values of the Gospel to solve differences in disputes.”

“He is humble, he had a spirit of service, was connected to the community in a non-divisive way and was willing to work on whatever limitations he had,” Sereno said. “He overcame his limitations.”

Lopez, his wife Corina, and other volunteers continue to help the hungry, homeless, orphans, and others through the Lay Brothers of the Poor nonprofit ministry.

The Lay Brothers are gearing up for their Christmas mission, bringing food to the most impoverished in the region, on Dec. 18, at 8 a.m. They will be packing food boxes Dec. 13 and 16, from 5 p.m. to 8 p.m. Donations or new blankets, new toys, canned goods, rice, beans, and other non-perishable items can be delivered to 3105 McConnell Road in Imperial.