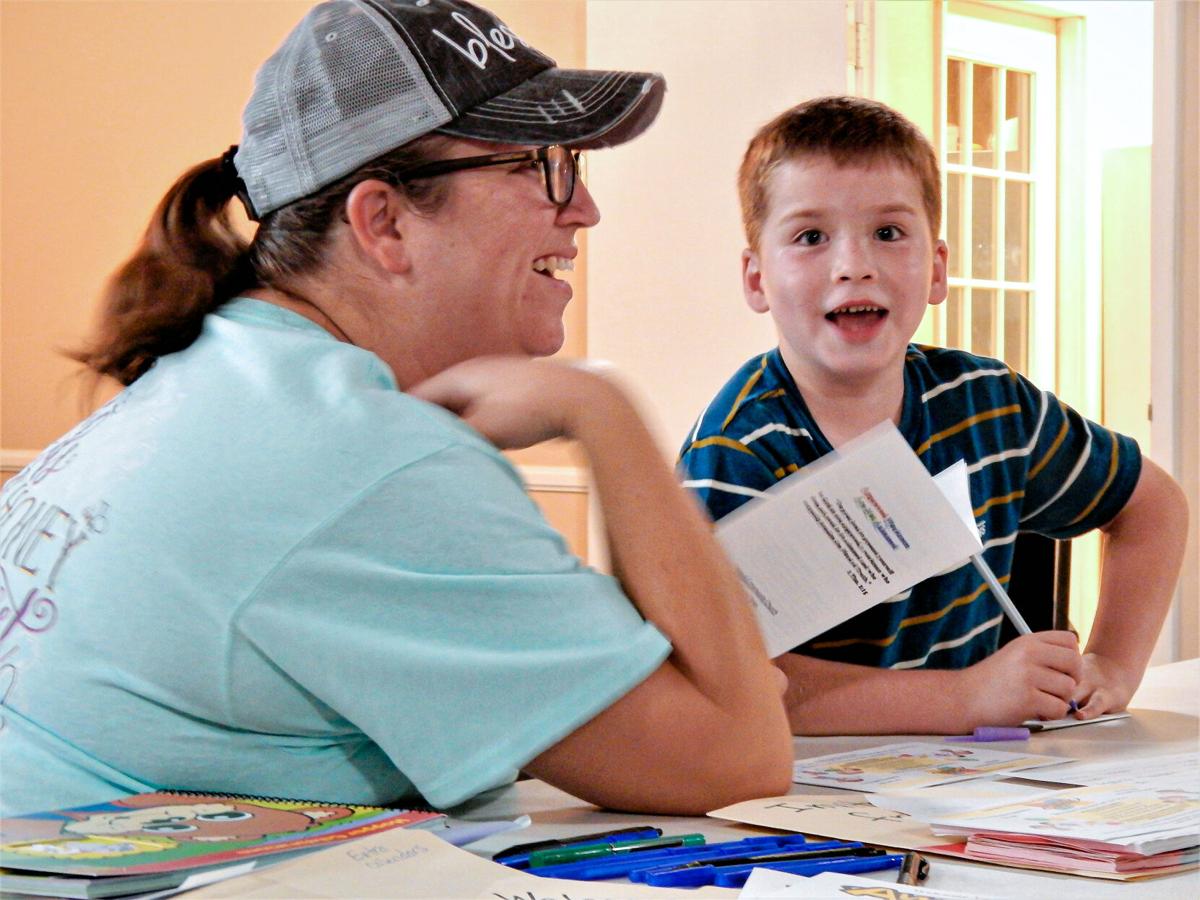 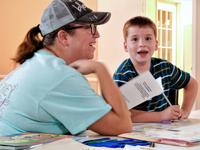 L to R: Imperial resident and mother Brittany Bentley shares a laugh with her son Michael, 7, during the AWANA Clubs sign ups at Imperial Community Church Wednesday, Sept. 8, in Imperial. 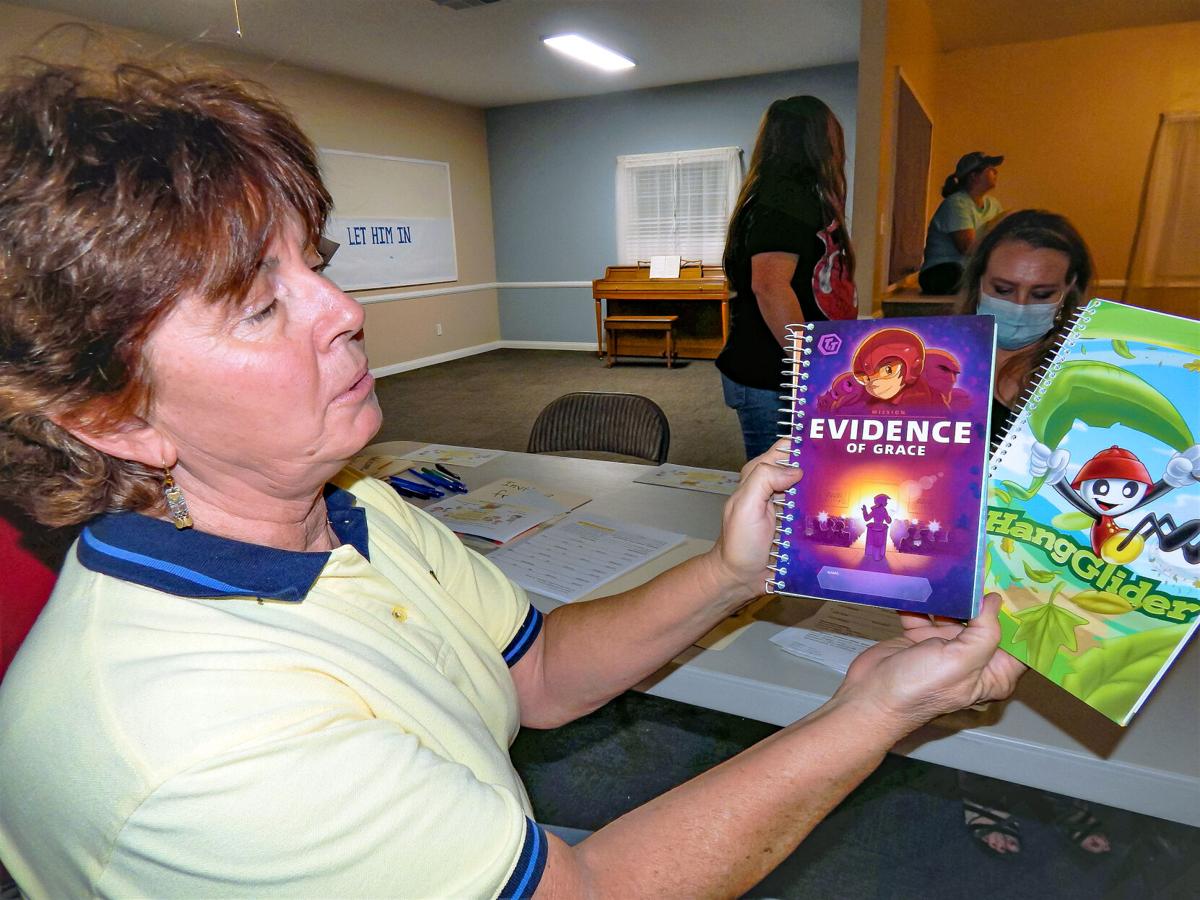 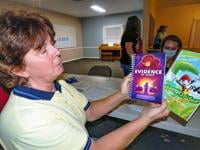 Imperial Community Church AWANA Clubs Ministry Director Julie Malan holds up displays some of the booklets used for the program during a sign up event, Sept. 8, in Imperial. 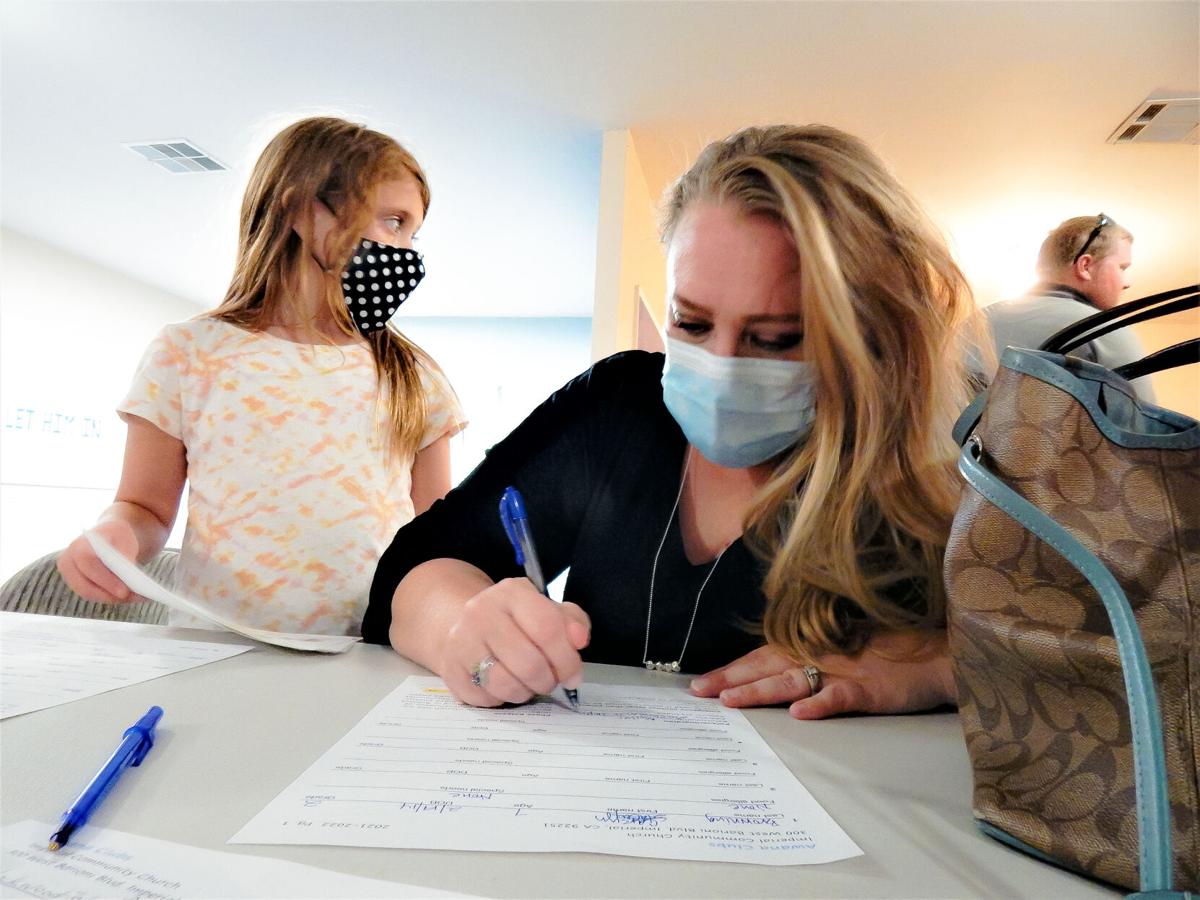 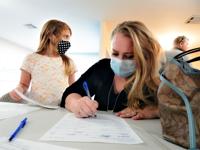 Imperial resident and mother Stacey Browning signs her daughter Carsyn, 7, up for a new year of AWANA Club at Imperial Community Church, Sept. 8, in Imperial.

L to R: Imperial resident and mother Brittany Bentley shares a laugh with her son Michael, 7, during the AWANA Clubs sign ups at Imperial Community Church Wednesday, Sept. 8, in Imperial.

Imperial resident and mother Stacey Browning signs her daughter Carsyn, 7, up for a new year of AWANA Club at Imperial Community Church, Sept. 8, in Imperial.

IMPERIAL — The frolicking of youngsters with their friends were seen and heard at Imperial Community Church’s AWANA Club sign ups Wednesday, Sept. 8, in the education building behind the main church building on the corner of Barioni Boulevard and G Street in Imperial.

One of several AWANA Clubs in the Imperial Valley — with clubs in Brawley, Calipatria, Holtville, and two in El Centro — the Imperial AWANA Club was happy to see parents signing up their children for the in-person program after having to do it through Zoom in 2020, ICC Pastor Jim Simpson said.

“AWANA stands for ‘Approved Workers Are Not Ashamed,’ which is taken from scripture, 2 Timothy 2:15,” he said. “It sounds strange but it's one of the most influential, fun, and organized ways (children) can learn the Bible, learn about it, learn about God, and it promotes self-security, and identity (formation).”

Simpson said the children learn their Christian identities through the AWANA program’s workbooks, learn how to fellowship with God, and how to keep that relationship with God going and growing, “and everyone wants that (sense of identity), whether you're a kid or an adult.”

“In a lot of ways, society has given up a lot of things — prayer in school, saying the Pledge of Allegiance at school, certain things which are the foundation of America and the Judeo-Christian faith,” Simpson said, “so what we're doing is filling that with a program designed to connect the teachers and leaders through Bible memorization, some songs, activities, and games.”

ICC AWANA Club Ministry Director Julie Malan said AWANA Clubs are open to children in the age range of 2 years prior to kindergarten through eighth grade at ICC.

Malan said it is not a requirement that parents be members of the church where their children attend an AWANA Club, but also said many AWANA Club children have had parents and some grandparents be part of AWANA in years past.

In the clubs, the children are sorted by age into pre-school “Cubbies,” kinder-through-2nd grade “Sparks,” grades 3-through-6 “T&T,” and junior high school “Trek” members.

“The kids are encouraged to memorize from their Bible and learn some of the important truths from the Bible. There are great mentor leaders for each age,” she said.

Malan said a typical AWANA Club meeting has different things going on within each of the three half-hour blocks in their Wednesday night meetings, from 6:30 p.m. to 8 p.m.

A typical AWANA Club night starts with the Pledge of Allegiance, the AWANA pledge, songs, and then Bible teaching through the workbooks, games, or some other activity.

Though the Zoom 2020 version of AWANA had 9 dedicated members, years past saw an average of 30 to 40 children in attendance, she said.

“Some of the kids have aged out, some families have moved away, and then the pandemic came too, so everything kind of hit us at once,” Malan said, “but we're excited about this year and excited to sign up new kids.”

While coordinators said the nondenominational Christian clubs are foundational to Christian learning, parents said they keep returning with their kids to sign up again because of a mix of socialization skills and friendships their children develop along with the faith learning and a chance for them to “burn off their energy.”

“We attend church here, so my son Michael has been coming already and this will be my daughter's first year doing AWANA here and we love it,” said ICC member and Imperial resident Brittany Bentley, as 7-year-old Michael played with his friend Milo Cox.

“It's a good way for them to not only learn about God but actually socialize with other children too,” she said. “He's made what I consider (to be) lifelong friends from coming to AWANA.”

Cox’s mother, Meghan Cox also of Imperial, agreed that her son wanted to come back to play and socialize with friends, saying that Julie Malan and her husband co-lead David Malan are “good people.”

“He's an only kid so he needed to socialize,” Cox said. “This church kind of gives them the opportunity to kind of learn for themselves; they teach them, but they don't force anything on them, which is a big deal to me. You kind of just get to soak it in and if you have questions, they answer them.”

Cox said her son loves the different themed nights that AWANA Clubs have throughout the year, saying he particularly enjoyed the awards ceremony and picnic at the end of previous years.

“It was a big deal (for him) to get to socialize and talk about things they don't talk about in school,” Cox said.

“The more the merrier,” she said.

A registration form and associated fees for ICC AWANA Clubs can be downloaded from their website. Malan said registration for AWANA at ICC is available most of the year. For more information on AWANA Clubs at Imperial Community Church, contact Julie Malan by email at brawleymalans@yahoo.com or by telephone at 619-473-8608.

The first AWANA Club in-person meeting of the season at ICC begins on Wednesday, Sept. 15, at 6:30 p.m. at 306 E. Barioni Boulevard in Imperial.