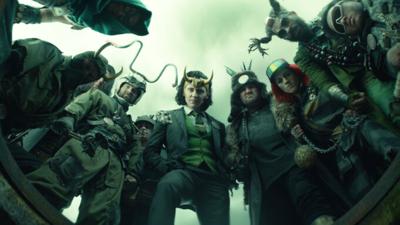 Loki — God of Mischief, charm, suave, and all manners of charming — makes the fans swoon and want more whenever he's on screen. Now he's got his own show and already causing ripples through the Marvel Cinematic Universe in more ways than one.

Heads up for anyone who has not seen Avengers: Endgame, there is a small spoiler.

The story drops us literally where titular character Loki (Tom Hiddleston) manages to escape back in Avengers: Endgame. He’s quickly picked up by the Time Variance Authority, or TVA, which is a dimensional time police charged with protecting the timeline by a group called the Timekeepers from variations or nexus events. Should these events happen, there could be massive multiverse consequences (think war on a multiverse level). Loki is just one variant that was not supposed to exist and must be eliminated. Enter Mobius (Owen Wilson) a TVA caseworker that has a thing for jet skis and getting the job done and who wants to use Loki to track down another variant that has been killing off agents. All the while, Loki bucks against the idea that someone is controlling what he says is his own destiny.

Thus, Loki is dragged into a world of timey-wimey craziness. Though what is nice about this series is how they approach time. It’s not too complicated and fairly straight forward how the TVA does its work without bogging down the show’s pace with too much unnecessary jargon. What is interesting is how single minded they are to complete their task. Almost to the point of zealotry. It’s concerning for Loki and enough to get other characters to start questioning things.

There is a lot of talking and exposition, though that is very much a thing with the Marvel TV shows. The writing does not feel like it’s too much though, with all credit given to the delivery of the actors in the show. Maybe in one or two places there are huge information dumps, then a quick jump into more action. Could there have been more action? Perhaps, but that’s not what Loki is known for, is it? He is known for words and wit, which this show has in spades.

It was actually very satisfying and amusing to see Loki not able to be his smooth, charming self for once. He is completely out of his element of “great and noble purpose,” unable to just charm his way out of everything. He HAS to work with people, he HAS to actually build and grow relationships he would have otherwise thrown out the door at the drop of a hat in order to survive. The amount of growth we see from episode one to the finale brings the character full circle.

And it asks us, what makes a person, a person? Or in this case, what makes a Loki, a Loki? It truly feels like Loki is going to change for the better in the future.

Just like WandaVision and Falcon and the Winter Soldier, it uses all six of its episodes to set up something much, much bigger.

And the biggest downside? The story is not done! It leaves you hanging at the most crucial moment, yet not. It feels like things got wrapped up but at the same time you are groaning in frustration because it threw another monkey wrench into the story and we’re going to be waiting a while for more.

What will come out of this series in the grand design of the MCU remains to be seen. All we can figure is this; it’s about to get very, very weird.