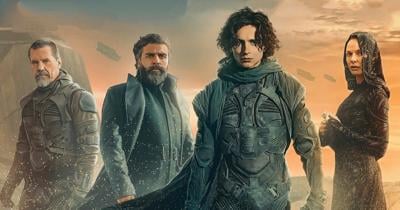 Rare is the day you find yourself experiencing something truly special. There are a lot of great films out there, but so few have ever truly warranted the theatrical experience as much as this particular film does. It is a scale that really can’t be compared to anything in recent memory, and at times, I found the theater screen to be too insufficient to capture the grandness of it. Epics like this are the very reason why the movies and seeking out the theatrical experience exist.

Dune stars Timothée Chalamet, Rebecca Ferguson, Zendaya Maree Stoermer, Oscar Isaac, Josh Brolin, Jason Momoa, and Javier Bardem. The film is directed by Denis Villeneuve and based on the original 1965 science fiction novel of the same name by Frank Herbert. Set in a faraway future, Chalamet’s Paul Atreides must reconcile between two conflicting destinies thrusted upon him while his family seeks to avoid oblivion from political rivals by corralling the production of the spice narcotic on the desert planet of Arrakis.

There simply is no shortage of greatness when it comes to the sheer filmmaking craft on display here. The visual effects simply cannot be rivaled, helping to fully illustrate the grand nature of this epic that is overwhelming and all immersive. The word I keep thinking of is transportive, it’s the best kind of cinematic experience where you’re taken to a faraway world, and you feel like you’re physically there rather than being in a theater house watching a projecting screen. The score by Hans Zimmer is so alien sounding and unsettling, it helps set the tone for what this is.

It’s not the easiest thing in the world by any stretch of the imagination to explain really what this property is all about. The director himself even admitted that this particular adaptation is only based on the first half of the original novel because of how much material and information there is to sift through. There’s just no way you’re going to be able to catch everything that you were being thrown at here in terms of mythology in world building on a first viewing. And while that sounds daunting, trust me, it’s not that big of a deal. It doesn’t become overwhelming to where you have no sense of what the story is. Sure, there’s a lot of information about this universe that it’s not made all that clear at first, but the information that matters most is establishing the narrative and it does that effortlessly. As weird as this may sound, this particular flavor of science fiction is as if the universe of Star Wars merged with the political intrigue of Game of Thrones.

The film is long at two hours and 35 minutes; however, it continuously moves at a next to breakneck pace. That isn’t to say what you’re seeing is being rushed or that you’re watching it in fast forward, but the narrative moves along as it should to maintain your interest. Of course, the characters are the anchor to our very interest and investment in the story and the director does a very good job of making us connect with them.

Timothée Chalamet really solidifies his status as a bonafide movie star as the lead character in the story, he conveys so much of his inner thoughts and identity through mere facial expressions. He’s the perfect kind of charismatic individual to make the audience like him and have sympathy for him. Rebecca Ferguson also shines here as Lady Jessica, Paul’s mother who belongs to a coven of soothsayer witches with their own designs.

The sound design, production design, cinematography, editing, costumes are working at the highest of their powers. The action, the suspense, the tension captured here is impeccable. It is, however, only the first part of one story. There is a naturally concluding end point for Paul’s arc here, but there is no sense of finality or resolution as the movie suddenly ends. You’d think this was some intermission break more so than the end of the movie, it’s abrupt to say the least.

Dune is one of the rare experiences that happens to be wholly new and original for those that are not familiar with the books. If you’re someone that really loves to go to the movies and cherishes the theatrical experience, this movie is such a treat. This may just be the next big franchise in Hollywood.