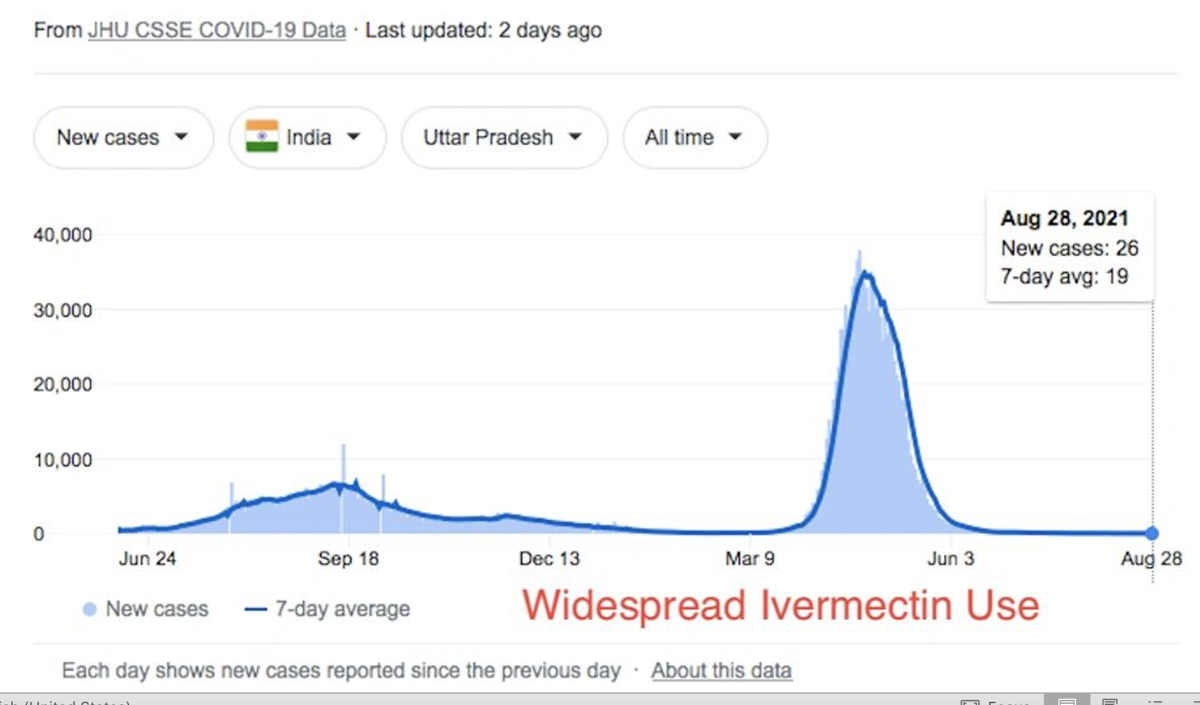 Kerala, the tiny state on India's southwest coast, is the one hotspot of COVID remaining in India. Kerala led India on August 25, 2021, with 31,445 of its 46,265 new infections. With no Ivermectin use, Kerala has some 34 million people, making their infection rate nearly one in one thousand. This rate is far higher than Uttar Pradesh, India, at closer to one in eight million, where Ivermectin is widely used.

However, Kerala's high infection rate is right up there with the United States, averaging about 150,000 new cases per day or about one in two thousand per population.

The Times of India confirmed Kerala's lack of contact tracing. Furthermore, they confirmed that the vaccines did not help prevent transmission, and they demonstrated that the test positivity rate dramatically increased - after August 5 - when Ivermectin was dropped from the protocol.

Juan Chamie, the Cambridge-based data analyst, was quoted in Part III of our series -The Lesson of Kerala:

Now we see their TPR has increased to 17.3%, far greater than anywhere else in India, and this increase begs an explanation. As discussed in this series, there has been a United States media blackout on India's overall conquest of COVID-19, particularly avoidance of any discussion about Ivermectin's role.

Now we hear grudging acceptance of some of this, especially by the Indian media.

Dr. Santosh Kumar SS, deputy medical superintendent, reported in the Times of India article that vaccination played a role in the massive transmission of the virus in Kerala. He stated, "It (vaccination) might not have helped control the spread, but it definitely helped reduce the severity of the infection, hospitalization, and deaths."

As they did so successfully in Uttar Pradesh, one could reduce spread by having all contacts and family members of an infected person take Ivermectin preventatively.

This method should be especially effective since Kerala admittedly no longer conducts contact tracing. Dr. A Sukumaran, state epidemiologist, reported, “An aggressive testing strategy was good till we were testing, contact tracing and isolating patients, but that is not happening now."

With only 3% of India's population, Kerala accounted for 50% of the country's new daily cases on August 1, 2021. However, after stopping their occasional Ivermectin use entirely on August 5, new infections accelerated, and now they account for 2/3 of India's cases. Kerala is moving in the wrong direction.

In Part III, this was most likely related to relaxing their lockdown restrictions to vaccinated persons. More than half of Kerala's population has received at least one vaccination. Vaccinated persons were exempted from the lockdown, which we believe accounted for Kerala's massive surge in sharp contrast to the rest of India.

Kerala made exceptions for vaccinated people, allowing them to mingle and travel and participate in festivals like the Hindu Festival of Onam, held annually in mid-August.

While the festival is often blamed for the spread, Kerala was already leading in cases before the festival. The real culprit is the relaxation of precautions in the vaccinated. The assumption that vaccinated people are "safe" is the real problem. That supposition is the issue, and this mistaken belief has led to global spread.

Those in the United States feel the vaccinated are safe for air travel, cruising, etc., as they have been granted vaccine passports. However, we now know the vaccinated can spread the virus every bit as quickly as the unvaccinated. A vaccinated person's viral load is just as high as an unvaccinated.

Indeed, following the free travel policy in vaccinated people and the incorrect assumption they were "safe," we saw massive surges in geographically isolated locations like Hawaii, Sri Lanka, Australia, New Zealand, and Tahiti.

These "safe" vaccinated travelers were the source of spread to those isolated destinations that previously had their pandemic under control.

A point of pride in Kerala is their high vaccination rate; they are among the top five most vaccinated states out of 29 in India. So vaccinated individuals are allowed past checkpoints and thought to be "safe."

Part III shows that vaccinated patients with breakthrough infections are a potent source of spread, and we believe this has been the core source of Kerala's rampant transmission.

The bottom line here is that Kerala's lesson is not being learned. Their virus seems to be transmitted more freely than anywhere else in India, and it is no longer a mystery why.  The vaccinated are spreading it as they are not subject to lockdown restrictions.

Their non-use of Ivermectin and failure to use it in all family contacts also played a significant role.

The problem now is not only failure to acknowledge the lessons of India; the problem is ongoing misleading and false publicity against Ivermectin.

In the United States, we see a coordinated media blitz of hundreds of recent articles - all begun in unison in August 2021 - alleging increased calls to poison control - without any evidence to support this.

Because it is not true, these reports have been fabricated to support an agenda.

However, the fact remains that in over 3.7 Billion doses of Ivermectin used over 40 years, Ivermectin has proved exceedingly safe, safer than Tylenol or aspirin and that safety record remains intact today.

When you read that anti-parasitic drugs similar to Ivermectin – also used in both animals and humans - are now increasingly used to treat cancers, please use your common sense when the media attempts to scare you aware from them. For example, my friend with brain cancer might not be alive today without another anti-parasitic drug, Mebendazole.

While the FDA has no problem with you spending 10,000 dollars per month on toxic and ineffective chemotherapy that permanently damages your organs, they object to you taking a cheap repurposed drug that can save your life. Ask yourself why?

Did it ever occur to you that Big Pharma and Big Media may be using similar deceptive tactics that Big Tobacco used to market their products? Did you ever consider that these corporations have an agenda against you taking inexpensive medications because they might lose sales of their expensive, yet more dangerous, and less effective solutions?

Would you consider reading for yourself how the media has demonized safe and effective medications through the use of fear to promote the Big Pharma agenda? Read what the most credible experts from Harvard and Yale have to say. Read about why the Nightly News, YouTube, Wikipedia, CNN, and the American networks have not been truthful with you on this subject. You don't want them to scare you away from what works.

Around the world, there is a push to censor anything related to Ivermectin's profound effectiveness against COVID-19.

The truth is often revealed in the most unlikely locations, even more remote than India. Look at this example from South America, deep in the Amazon. Dr. Flavio Cadegiani, an MD, PhD endocrinologist, and researcher, reported his experience in the state of Amazonas during the peak of the Gamma (Brazilian variant) COVID outbreak. He found all the hospitals packed with sick patients, except one city, where the hospital was empty.

No one was sick. It was as if COVID-19 had skipped over this city which was in the middle of all the others that were brimming with cases. There was no obvious explanation according to Dr. Cadegiani.

"There in the middle of the Amazon, we went to a city called Coari. We went there expecting a full hospital with thousands of patients. (Instead) the hospital was completely empty. (So) we were not able to conduct the study there. I was trying to understand (why)."

Dr. Cadegiani asked the Secretary of Health why. She was reluctant to answer in front of people. In private, she told Dr. Cadegiani it was because the whole town had been treated with Ivermectin, but she feared his judgement.

The doctor relayed this story, “And we came to another (private) room, and she said (quietly), 'Look, we actually have provided Ivermectin for the whole population for two months now.'

The doctor asked, 'And why are you shy in telling me that?'

'I thought you'd accuse us of giving unapproved treatments,' she replied.”

The doctor explained she was fearful of government criticism. See Mark 12:00

In an interview on CNN, Dr. Fauci himself, the face of organized medicine, said,

“Don't do it - take Ivermectin for COVID.”

However, if Ivermectin has been FDA-approved as safe for scabies and rosacea, and it has, then it cannot be somehow unsafe for another condition - provided a medical doctor appropriately prescribes it.

When evaluating conflicting recommendations, one should consider the potential of bias, especially financial. Dr. Fauci's alignment with significant corporate interests is something one should keep in mind.

When evaluating the trustworthiness of witnesses, one should ALWAYS look at bias. And place the most weight on data. Compare what Dr. Fauci said with the experience in India. The graphs of the Uttar Pradesh experience with Ivermectin compared to Kerala's debacle without it should tell you something.

The Health Secretary of Coari had nothing to gain in explaining their secret use of Ivermectin was the reason her hospitals were empty. Indeed, a statement that admits to violating a governmental order is probably true as it is against one’s interest – it could expose one to a fine or penalty – most would not lie about something that could get them into trouble. The law of evidence holds that a statement against interest contains inherent trustworthiness.

However, Dr. Fauci's statements are tainted by the overwhelming influence of Big Pharma and their not-so-subtle agenda. As a result, his statements are anything but credible. So, when it comes to health matters and saving you and your family, you must decide who and what to believe. Nothing beats old-fashioned common sense. Nothing beats the truth.