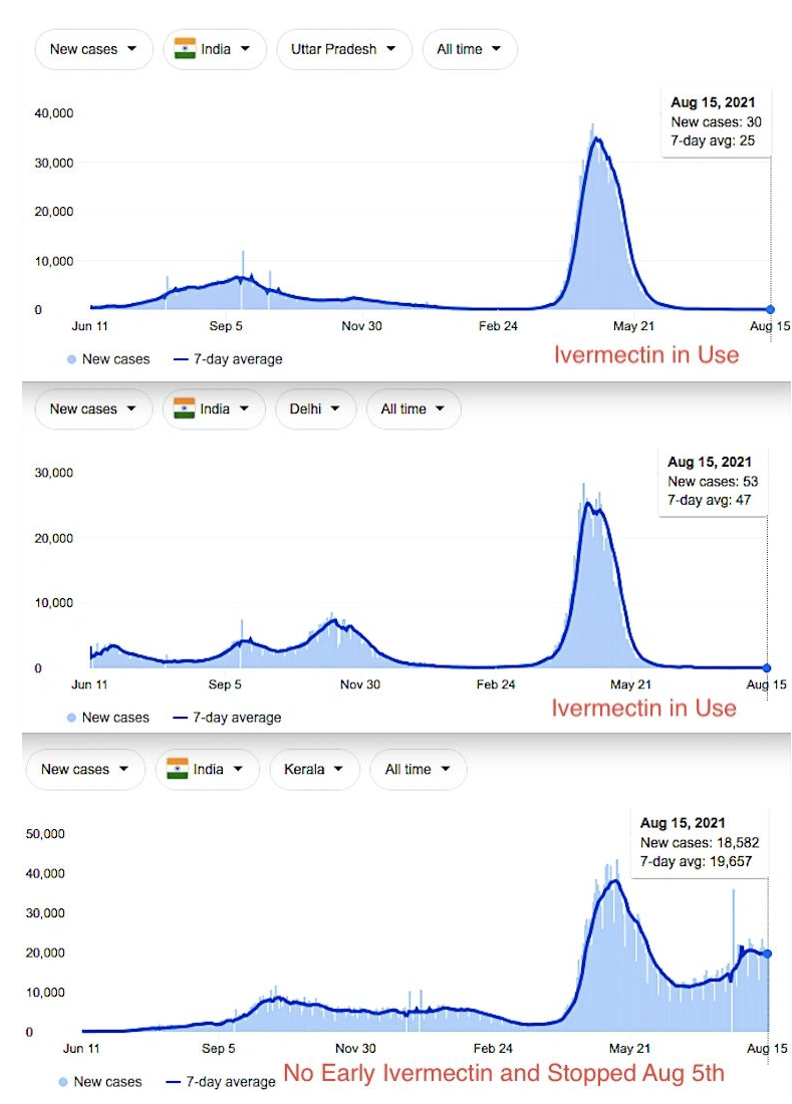 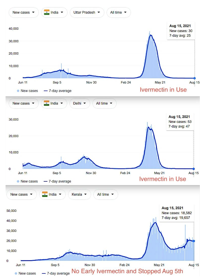 The New York Times reported India’s colossal drop in COVID cases was unexplainable, while the BBC declared that Kerala’s rise was also a mystery. While new cases of COVID in Uttar Pradesh are rare as million-dollar lottery tickets, in Kerala, a tiny state located in southern India, new daily cases are the same as the United States, nearly one case per thousand. Yet, as we have seen in this series, there has been a curious media blackout on India’s overall success against COVID.

"Kerala has been reporting over 22,000 new COVID infections in the last three days. No other state in India is even close to the 10,000 mark. The COVID conundrum in the southern state has led to several questions, with no certain answers."

The Times of India published this statement on July 29. Kerala has continued to have the majority of new daily cases and almost 25% of India's daily deaths despite a population of 34 million, less than 3% of India's total population.

On August 15, Kerala accounted for 18,582 of India's 32,937 new cases and 102 of India's 417 new deaths. By contrast, the Ivermectin-using state of Delhi, with nearly the same population size, recorded only 53 new cases and ZERO deaths. In comparison, Uttar Pradesh, with almost eight times as many inhabitants, had only 30 new cases and ONE death.

So what could Kerala be doing wrong?

Uttar Pradesh led India in its use and has done even better than Delhi because they use Ivermectin early and preventatively.

"Uttar Pradesh was the first state in the country to introduce large-scale prophylactic and therapeutic use of Ivermectin. In May-June 2020, a team at Agra led by Dr. Anshul Pareek, administered Ivermectin to all RRT team members in the district on an experimental basis. It was observed that NONE OF THEM developed COVID-19 despite being in daily contact with patients who had tested positive for the virus," Uttar Pradesh State Surveillance Officer Vikssendu Agrawal said.

Uttar Pradesh has a policy of treating ALL the contacts of an infected patient prophylactically with Ivermectin.  In other words, in Uttar Pradesh, everyone in the house gets Ivermectin treatment even if only one is infected. Ivermectin is known to reduce mortality in infected and dramatically lowers the viral load, thereby helping reduce the spread of the virus to others.

To be clear, on April 22, the All India Institute of Medical Science (AIIMS) and the Indian Council of Medical Research (ICMR) added Ivermectin to the protocol as an option for the early treatment – even in mild cases – of COVID-19.

This guideline was updated May 17, 2021,  and continues to incorporate Ivermectin, although some states like Tamil Nadu and Kerala have chosen NOT to adopt this Ivermectin protocol – much to their detriment.

Despite a widespread attempt by the media and WHO to convince the world that India has dropped Ivermectin by citing the DGHS, the ICMR and AIIMS have not changed their position, and Ivermectin remains in the India National Protocol.

While Kerala included Ivermectin in their state’s guideline in April, they restricted it’s use to only in Class B - severe cases or those with associated disease, making its use much less than if mild cases were allowed. This meant it was reserved as a late treatment if used at all.

Juan Chamie, the Cambridge-based data analyst who has provided graphical insight and published on COVID, provided his answer to why Kerala's COVID cases have spun out of control.

Another factor, according to Juan, was poor contact tracing. In addition, according to an Indian Governmental Audit, FAMILY TRANSMISSION was a significant problem.

The Hindu reported on  August 11, 2021, stated, "In districts such as Malappuram and Kozhikode, where the family size is huge and joint families are the norm, the transmission was spreading within families leading to a high test positivity rate."

However, the most problematic feature is Kerala's high vaccination rate compared to the other Indian States. While vaccination should be a good thing, it can have severe negative consequences when it leads to rampant viral transmission.

Uttar Pradesh beats all other states (except Bihar) with the lowest COVID deaths and infections because of early and preventative Ivermectin use IN ALL FAMILY CONTACTS. This is despite Uttar Pradesh having only a 4.9% vaccination rate, one of the five lowest of all states in India. On the other hand, Kerala ranks in the top five most vaccinated states. Kerala has vaccinated 70%  citizens 45 years and older, and almost 56% of its population has had at least one shot.

The problem with that is that vaccination may give a state a false sense of security.

For example, in an article published on August 13, the details of the Kerala lockdown were discussed. Those with a PCR negative test, those with prior resolved COVID infection, and those WITH AT LEAST ONE VACCINATION were exempted.

As of August 13, 56 percent of Kerala adults over age 18 who had received at least one shot were allowed to mingle and transmit the virus freely. While Ivermectin lowers the viral load and inhibits transmission, the same cannot be said for vaccination.

Viral loads of the vaccinated are just as high as those of the unvaccinated as the CDC has admitted. This means that a vaccinated infected person can spread the virus just as quickly as an unvaccinated. Moreover, the viral load of the Delta infection is often on the order of 1,000 times greater than in the original strain. Finally, a vaccinated person may have milder or no symptoms leading them to take fewer precautions.

Finally, the top five states surging in the United States with record COVID infections currently contain two states in the most vaccinated third: Oregon and Hawaii.

The situation in Oregon is severe enough to call the National Guard, while Hawaii's health director is using terms like disaster and crisis.

"When we see this exponential growth in the amount of people that are getting infected with COVID-19 every day - 2,000 people in the last three days – that’s a crisis. And at the point at which we overwhelm our resources, that's a disaster."

And the Indian state of Kerala ranks in the top five most vaccinated of India's 29 states. However, if a vaccinated person spreads the virus while someone on Ivermectin does not, that would explain Kerala's epic failure.

Another excellent article. Dr Hope, could I please confirm that Mr Juan Chamie's raw data is not disputed by those who support the other narrative?

What a good article, so surprised to find it in local newpaper. Excellent. excellent. excellent. I have done so much research on both vaccines and Ivermectin, but do yo know I never knew Ivermectin will stop transmission unlike vaccines. Now that just ratchets up my frustration even more; but glad to have learned that today. But was always an Ivermectin fan. Using it in addition to an inactivated virus vaccine I found in Mexico. Thank you for this article that covered so many things I'm interested in; Reported just today that Kerala now has 68% of India's new cases.

Excellent - now you are doing a great job of explaining the centrality of contact prophylaxis to Uttar Pradesh's amazing success against COVID.