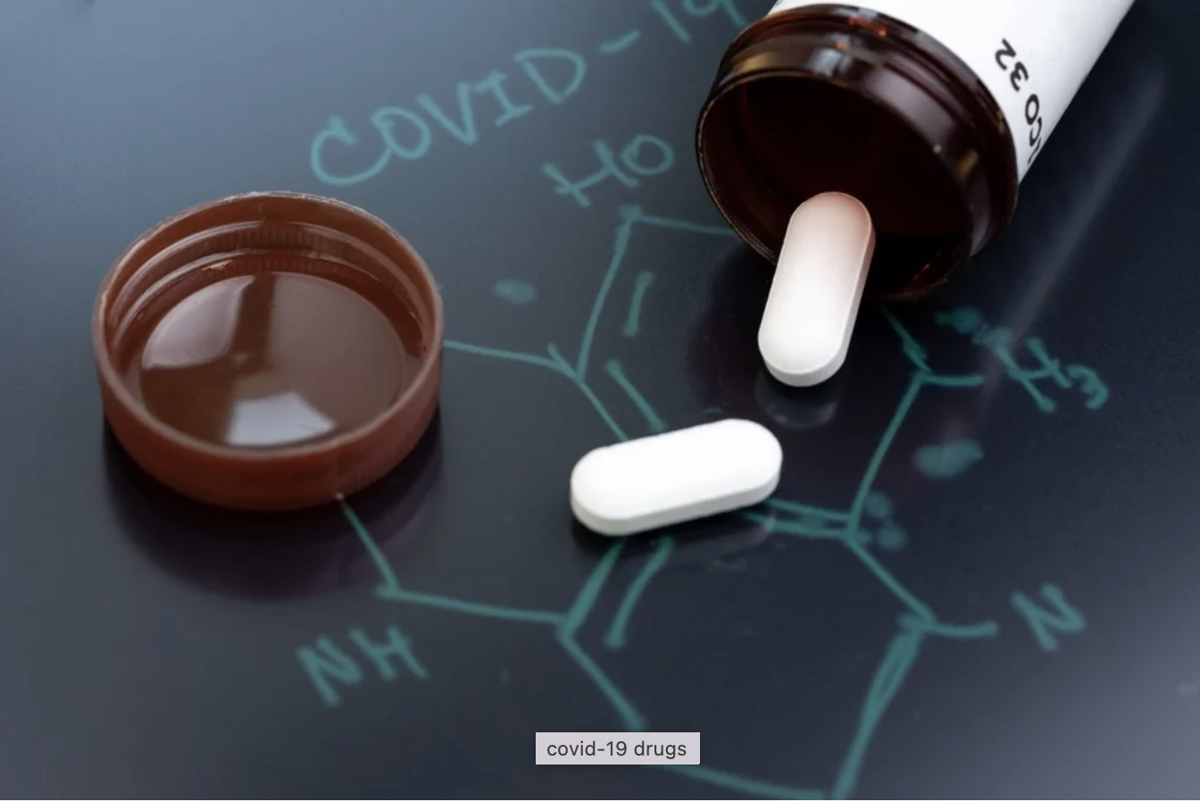 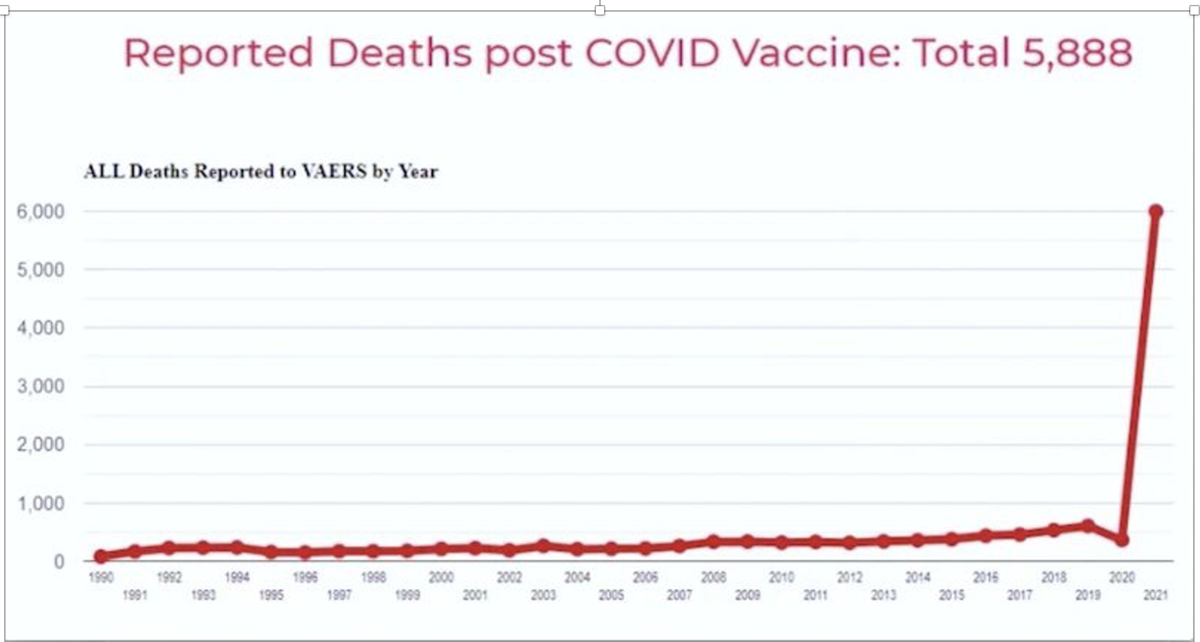 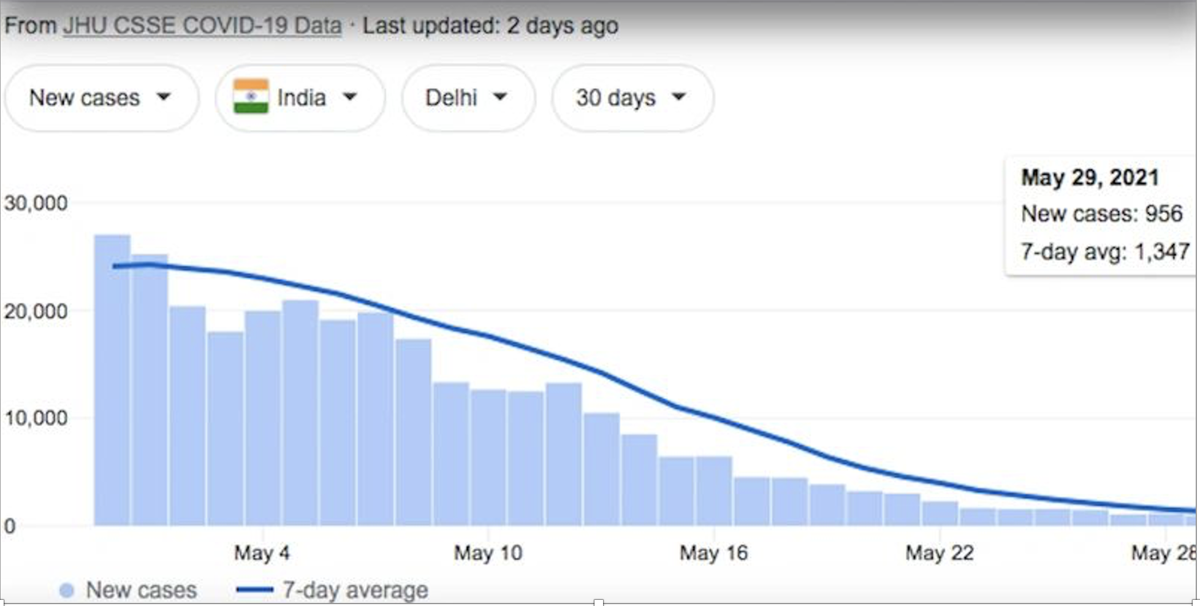 A picture is worth a thousand words. Complicated science can often be understood at a glance with a chart. These three graphs bust myths about Ivermectin, repurposed drugs, and vaccines without saying a word. And as we all know, some truths are self-evident.

The first graph is from the data reported in the VAERS database. This is short for the Vaccine Adverse Event Reporting System that was begun in 1990.

The graph reflects deaths reported from all vaccines annually since 1990. The last year shows a spike that rises almost off the chart. This reflects 5,888 reported deaths, more in one year than the last 30 years combined.

However, there are limitations to VAERS. It grossly underreports adverse events. A study done by Ross Lazarus showed that less than 1% of vaccine adverse events get reported. If Lazarus is correct, the actual deaths from vaccines these last 12 months might be as high as 100 times that number.

The lower graph shows the relationship between daily new COVID-19 cases in the city of Delhi over time. Within six weeks of starting Ivermectin, cases in Delhi had dropped by 97%.

So says this data compiled by the Johns Hopkins University Center for Systems Engineering, the most widely recognized data authority on the pandemic, the JHU CSSE. This massive drop is reproducible in other locations that adopt it. We have seen it before, in Bulgaria, in Slovakia, and Macedonia. They all show the same Ivermectin fingerprint, dramatic 95 to 99% drops in cases and deaths. More impressive than the vaccines by far.

The Ivermectin fingerprint is seen whenever Ivermectin is adopted. So why have we not adopted it now in Indonesia and Malaysia, where cases and deaths are surging exponentially? The middle graph displays the test results of a Stage 4 Pancreatic Cancer patient's tumor marker levels over time.

The lower the CA19-9, in general, the lower the cancer activity. Within days of adding a repurposed drug cocktail to standard treatment, this patient’s CA19-9 level dropped like a stone, faster than any of his Oncologists had seen with this type of cancer. The repurposed drugs he added were Hydroxychloroquine and Paricalcitol - a form of injectable Vitamin D.

These are similar to the repurposed drugs used so successfully to save 6,000 lives in California’s Imperial Valley by Dr. George Fareed and Dr. Brian Tyson, which incorporate both Vitamin D and hydroxychloroquine.

A normal CA19-9 level in someone without cancer is below 35. This patient with terminal Pancreatic cancer saw his levels drop from 11,500 to below 35 in about three months. However, he was not an average patient; he was himself a physician.

Dr. Stephen Bigelsen has taught at Rutgers University Medical School as a professor in Allergy and Immunology. He is a scientist and goes by the book. He researched his cancer and spoke to others who did more specific research, and he did not accept the consensus standard of care. Instead, he innovated, and he remains alive, some five years later, fully recovered from Pancreatic Cancer. Like Ivermectin, Hydroxychloroquine and Paricalcitol are repurposed drugs. They are deemed safe and effective by the FDA for another disease, yet used in cancer after showing scientific promise.

Like Ivermectin, the FDA and regulators hate the idea of repurposed drugs because they are being used without their permission or approval. Regardless, it is legal for physicians to prescribe them if they believe, based upon their knowledge and experience, it may help or even save a life. In the case of Dr. Bigelsen, it was his own life that was saved.

These graphs leave us with several uncomfortable but essential questions.

We do not want to whitewash this either because we will all pay a terrible price with cancers and viruses if we ignore these graphs. This is not the last time we will deal with a pandemic. If we do not want the next one handled the same way, we must educate ourselves and not bury our heads in the sand. Just as we have misplaced our trust in our wrongheaded policies on cancer treatment, so too we have given carte blanche trust to health officials who have grossly mishandled the pandemic response.

#1. If Ivermectin is FDA-approved as safe for parasitic disease and nearly always works, why are we not using it? Why can't the whole world benefit as India did? Why can't we deploy it to everyone in Indonesia and Malaysia right now and save them too?

#2. Suppose no one survives Stage 4 Pancreatic Cancer using standard treatment - the standard treatment of chemo/radiation/surgery received by Alex Trebek, Patrick Swayze, and Michael Landon. Why don't we INFORM ALL cancer patients that repurposed drugs are an option? Must you be a physician like Dr. Stephen Bigelsen to get the repurposed cocktail? Most of us would never know even to ask.

Must a patient stumble on a book that explains this?

Very few people stumble upon repurposed drugs for cancer. As a result, 99.999% never get the type of treatment that Dr. Bigelsen did. And he tells his story that getting into a clinical trial is not all that helpful if you get only one drug, or only get the placebo, or if you wait until the late stages when cancer has returned in a resistant state.

Getting into a clinical trial after all else fails in cancer care is too little, too late. It may help the study, but it usually does little for the patient. Dr. Bigelsen got all the drugs started by writing a prescription for himself, something most of us cannot do.

The repurposed drug cocktails MUST BE STARTED EARLY.

It is the same with COVID-19. The earlier one starts the Ivermectin, the better. In India, entire households would begin the Ivermectin the moment one family member got sick. This strategy proved remarkably effective, and it did not produce deaths, strokes, or blood clots.

#3. Why is there a news blackout on informed scientific vaccine discussion - by top scientists?

Dr. Tess Lawrie, one of the world's most respected evidence synthesis experts, ranks in the top 5% of research scientists. She has worked for decades and has been relied upon by the WHO. Her work has formed the basis for many international clinical treatment guidelines. When she published in peer-reviewed medical journals about moderate certainty evidence showing a 62% reduction in death with Ivermectin, this was not allowed on Wikipedia pages. However, she was not truly silenced until she wrote about the dangers of vaccines.

It was only AFTER she advised against the COVID-19 vaccines that virtually all of her communications with the world were cut. Her Twitter feed, her YouTube videos, and most of her interviews were scrubbed from the internet. However, the following have survived as of this writing:

What is the point of all this? 1.9 million Americans contract cancer each year, and 600,000 die from the disease. These numbers, in my opinion, can be reduced by 1/3 by the widespread adoption of repurposed drug cocktails. Unfortunately, the standard of care for most cancers remains Chemo/Radiation/Surgery. I write a lot about the SAM cocktail, a combination of Statin/Aspirin/Metformin. Dr. Bigelsen writes about this as well.

Repurposed drug cocktails – under appropriate physician guidance and care - including Ivermectin should be added to COVID-19 patients IN ADDITION to the standard of care, which now includes the vaccines, for better or for worse. Ivermectin has shown a spectacular effect against the DELTA variant, unlike the vaccines, which often fail against resistant strains.

Giving all people information and adding repurposed drugs to cancer and COVID treatment is vital to combat cancer and viruses in the 21st century. Open, honest, and ongoing scientific dialogue is essential, and censorship must be abolished.