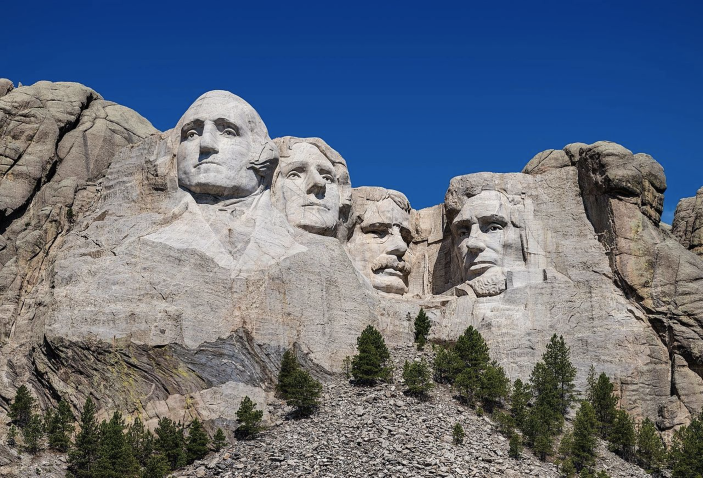 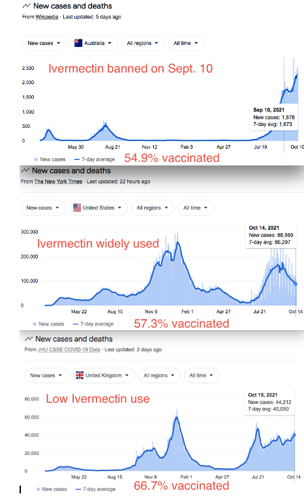 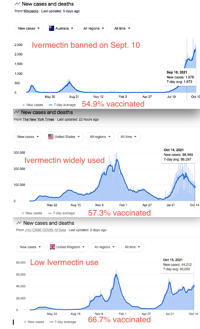 The Victory of the Underdog

The nurse plunked down ten crisp hundred-dollar bills, looked the pharmacist in the eye, and said,

"Spray it on the floor. Don't inject it. I'll pay you 1,000 dollars if you fill out the card and say I got the vaccine."

One can draw two inferences from this story:

One, those health care professionals in the know do not want to risk taking the jab. Two, they feel confident they are better protected with something else.

And that something else has traditionally been natural immunity through prior infection – but is now increasingly becoming Ivermectin.

By August 13, 2021, the CDC reported Ivermectin prescriptions had reached 88,000 per week, up 24-fold from the baseline of 3,600 per week. Based upon increasing popularity, it appears this number has risen many times again over the past two months, easily reaching into the millions.

Up-to-date October data are not public for obvious reasons.

But what has been released are the daily COVID cases and deaths, and these tell a striking tale. The current graph of the United States COVID cases has taken on the "Ivermectin Fingerprint" pattern so familiar to us from India, Peru, and Indonesia after they adopted Ivermectin.

It is familiar to anyone who read the book Ivermectin for the World or Dr. Pierre Kory’s peer-reviewed article, “Review of the Emerging Evidence Demonstrating the Efficacy of Ivermectin in the Prophylaxis and Treatment of COVID-19.”

It is also familiar to anyone who has reviewed Juan Chamie’s graphs.

A study by Hellwig and Maia published in the International Journal of Antimicrobial Agents in January 2021 described the much lower rate of COVID-19 infection in those countries that routinely used prophylactic chemotherapy (PCT), including Ivermectin.

These researchers noticed a strong negative correlation between Ivermectin use and  COVID-19 cases - ranging from a reduction of between 30 to 90%.

Now, some nine months later, we see the near-complete eradication of COVID-19 from Uttar Pradesh, India, after a systematic test and treat program coordinated by the WHO that involved the distribution of millions of Ivermectin-containing home treatment kits.

Today, we notice the United Kingdom, with nearly 70% of its citizens fully vaccinated, has encountered an unrelenting rise in Delta cases. Their Delta Surge began a month before the United States, and it is lingering longer. If the vaccines worked, the United Kingdom should be performing better than the US. But the reverse has occurred.

The United States, with its vaccinations stagnated at 57.3%, is enjoying a massive drop in cases.

At nearly the same vaccination rate as the US, 55%, Australia is seeing a deadly and unforgiving Delta surge amidst harsh lockdown measures that are universally failing. As a result, their cases are going through the roof despite mandatory mass vaccinations. At the same time, the United States' cases are dropping like a stone.

In Australia, Ivermectin has been banned, even for off-label use, since September 10, 2021.

They have paid a terrible price in cases and deaths - despite having almost the same vaccination rate as the United States.

On September 10, Australia averaged just 1673 new COVID cases per day. However, after the Ivermectin ban, cases surged, and by October 10, they had risen to 2295 per day, a jump of 37%. These figures were compiled by the Johns Hopkins University Center for Systems Science and Engineering (CSSE).

There are many reasons, but the greatest has to do with freedom – creating off-label access to Ivermectin. In the United States, we continue to enjoy a patient's right to choose their doctor and their medical treatment - at least when we are out of the hospital.

While off-label Ivermectin is illegal in Australia, it is almost as prohibited in the UK with their stranglehold on prescribing through socialized medicine.

Only in America do we have the true freedom to obtain and use Ivermectin. In America, patients enjoy the benefits of repurposed drugs when applied to various diseases, including terminal cancer.

Repurposed drugs are approved as FDA safe for one condition and used to treat another based on a doctor’s experience and training.

Off-label use of drugs accounts for up to half of all prescriptions. Examples include the use of trazodone [approved for depression] for insomnia, gabapentin [approved for postherpetic neuralgia] for nerve pain, and buproprion [approved for major depressive disorder] for smoking cessation. None of these uses have been challenged, and they are all appropriate and legal.

In 2013, Dr. Anthony Fauci was all for the use of repurposed drugs to treat MERS, another coronavirus that caused fatal respiratory disease in humans.

"If a physician is faced with a very sick person with MERS, they at least now have an option — a combination of drugs that has been used on many, many patients — even though the scientific evidence is small [for its effectiveness]," says the director of the National Institute of Allergy and Infectious Diseases…“But if I were a doctor with MERS patients, and I had nothing else to give them, I wouldn’t hesitate. If someone has advanced disease, there’s 50 percent mortality.” -  Dr. Anthony Fauci.

It also turns out that medicine need not be labeled “antiviral” by Big Pharma to possess antiviral properties. For example, one application of Ivermectin reduces Sars-CoV-2 in cell culture by 99.98% within 48 hours – and clinical trials show it to be similarly effective in patients. And no, it is not toxic.

If anyone tries to tell you Ivermectin does not have antiviral properties, they are pulling your leg.

Judging by patient word-of-mouth reports, Ivermectin has become the talk of the land. Indeed, many are taking it preventatively every week. Others take it for treatment, including those nasty breakthrough cases in the "fully vaccinated."

Dr. Brett Weinstein, an evolutionary biologist, has reported that he and his family take Ivermectin weekly instead of receiving the vaccine as a way to prevent COVID-19. Unfortunately, his pro-Ivermectin interviews led to the demonetization of his YouTube channel and the widespread censorship of his popular podcast, Darkhorse.

Another popular podcast host, Joe Rogan, famously recorded his experience using appropriate and physician-prescribed Ivermectin for his COVID-19 illness - only to be skewered with lies and ridiculed by the media.

Big Pharma and the mass media have spun multiple other untruths in their propagandist quest to sell the vaccines to the public despite widespread safety concerns.

Yet we see more articles by mass media supporting the Big Pharma vaccine narrative and suggesting that vaccine hesitancy is a product ONLY of unreasonable fear or scientific illiteracy.

Nothing could be further from the truth. The real reason most don’t trust Big Regulators working with mass media is the many lies we have caught them in before as illustrated in the above links.

As the United States has fallen behind, there have been increasingly desperate attempts to raise the country’s vaccinated percentage, such as the compulsory vaccination of school children, the mandatory vaccination of the military, and the forced vaccination of federal employees.

However, the US Constitution and Bill of Rights precludes the Federal Government from legislating on health, education, and welfare matters, as these powers are exclusively delegated to the individual states. The tenth amendment says,

This has been broadly interpreted constitutionally to mean that States have the right reserved to legislate for the health policies of their people under a State’s Police Powers – in sharp contrast to what the President and his staff have led us to believe.

With the increasing use of unconstitutional federal vaccine mandates, unlawful attempts to prevent pharmacies from filling valid Ivermectin prescriptions, and the growing improper threats to physician licenses, our nation has witnessed an assault on our democracy – indeed, an assault on our way of life.

Finally, there has been a rampant and recent de-platforming campaign waged by Vimeo, PayPal, and Facebook – especially against non-profits like Dr. Pierre Kory’s FLCCC, whose only goal is to save lives with repurposed drugs. That stance is un-American. It is antithetical to every value we hold.

Abe Lincoln might have a problem with that. A self-educated man who was often ridiculed, he was our nation’s ultimate underdog. Lincoln lost his mother at an early age and emerged from poverty. Nevertheless, he became President and saved the United States of America through inspired leadership during the Civil War.

Pierre Kory is today’s American underdog. And despite the FLCCC having little money, no mouthpiece, and suffering extreme censorship, he has managed, against all odds, to nearly single-handedly get the life-saving message of Ivermectin out to the US and the rest of the globe.

And, due largely to Kory’s efforts, one thing is certain. Ivermectin for COVID is here to stay. And many who are Pro-Ivermectin happen to find themselves in the Anti-COVID-Vaxx camp, not because they are Anti-Vaxx, but because they are more informed than most.

Far from being scientific illiterates or conspiracy theorists, many are health care professionals themselves, and some have done considerable scientific investigation including publishing their results in peer-reviewed medical journals.

These include Dr. Peter McCullough, an academic Texas Cardiologist and President of the Cardiorenal Society of America, the outspoken physician who has published more peer-reviewed articles on COVID-19 than anyone else in the world. The same physician who advocated early outpatient treatment before the US Senate in November 2021, the same doctor who stood tall with Yale’s Dr. Harvey Risch and Harvard’s Dr. George Fareed.

And there is increasing protest and resistance to vaccine mandates by ever-larger portions of America – by the educated, by the courageous, and by the well-informed.

Doctors are walking off the job rather than submitting, while pilots are refusing to fly. Nurses are offering bribes to pharmacists to fake the vaccine paperwork.  Police are threatening to walk off the job.

In short, America is back to doing what it does best—standing up for freedom, and standing tall for Human Rights.

xtane 25 mg contain exemestane which has a place with a gathering of medication called aromatase inhibitors. It is utilized to treat chemical ward early bosom malignant growth in postmenopausal ladies after they have finished 2-3 years of therapy with the medication tamoxifen and chemical ward progressed bosom disease in postmenopausal ladies when an alternate hormonal medications treatment has not functioned admirably enough.

I have noticed that the same pharmacies that are administering the covid vaccines are the very same ones that are refusing to fill ivermectin prescriptions for treating covid. Is that a coincidence? Or is it about not biting the hand that's feeding you? Those pharmacies should be deluged with lawsuits for withholding medications to patients and subsequently causing them harm. There are a lot of perverse incentives going on in healthcare. I think healthcare practitioners need an intensive course in ethics, for there seems to be a complete deficit.