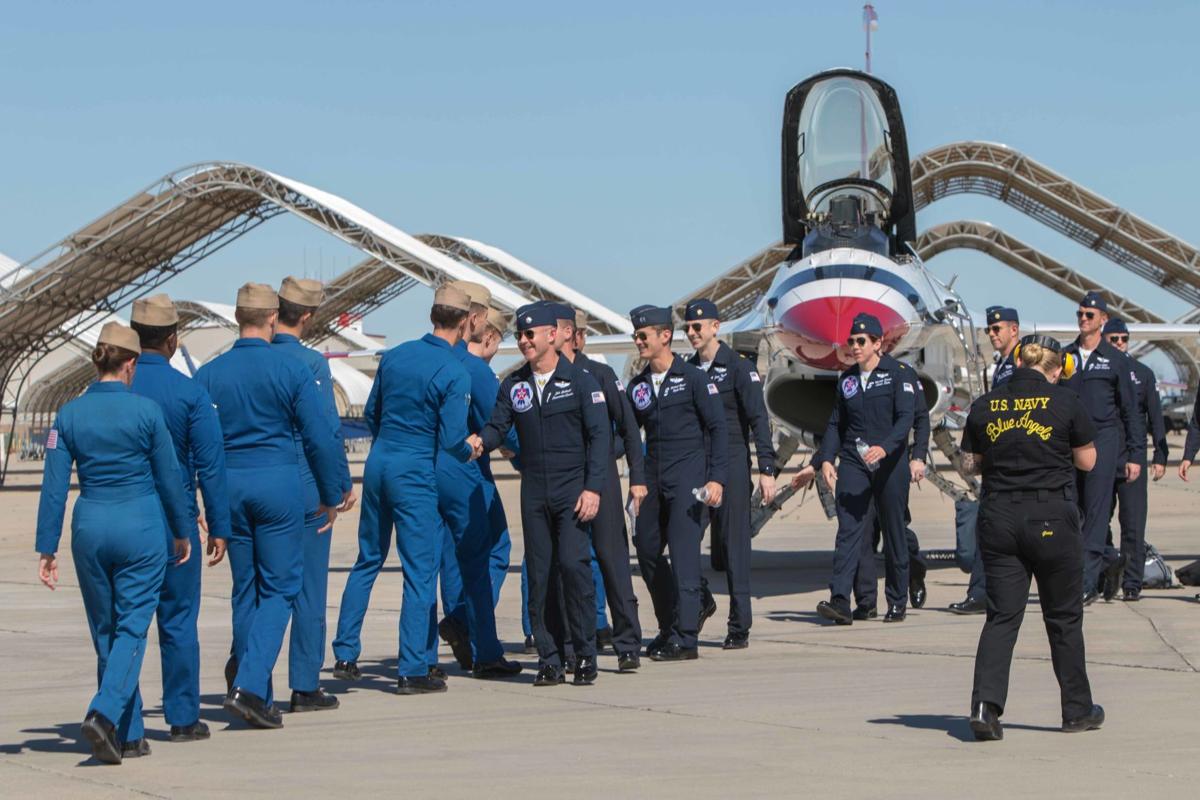 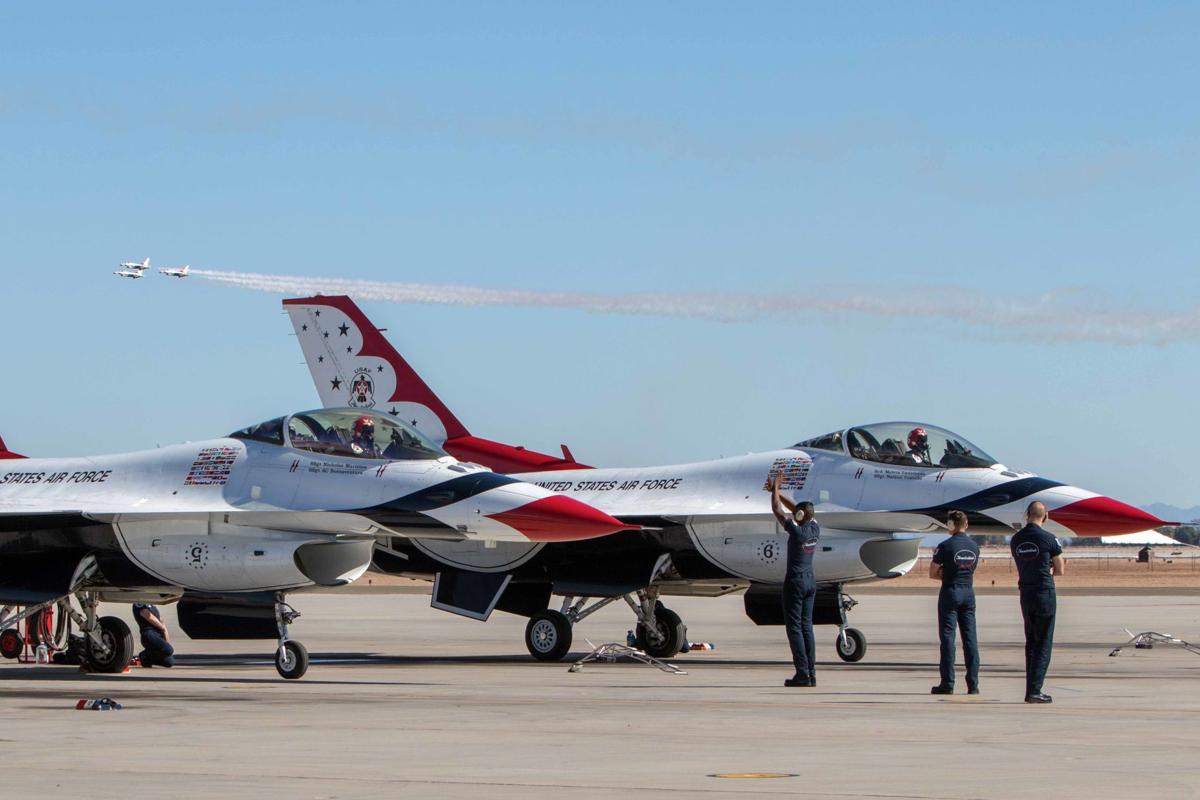 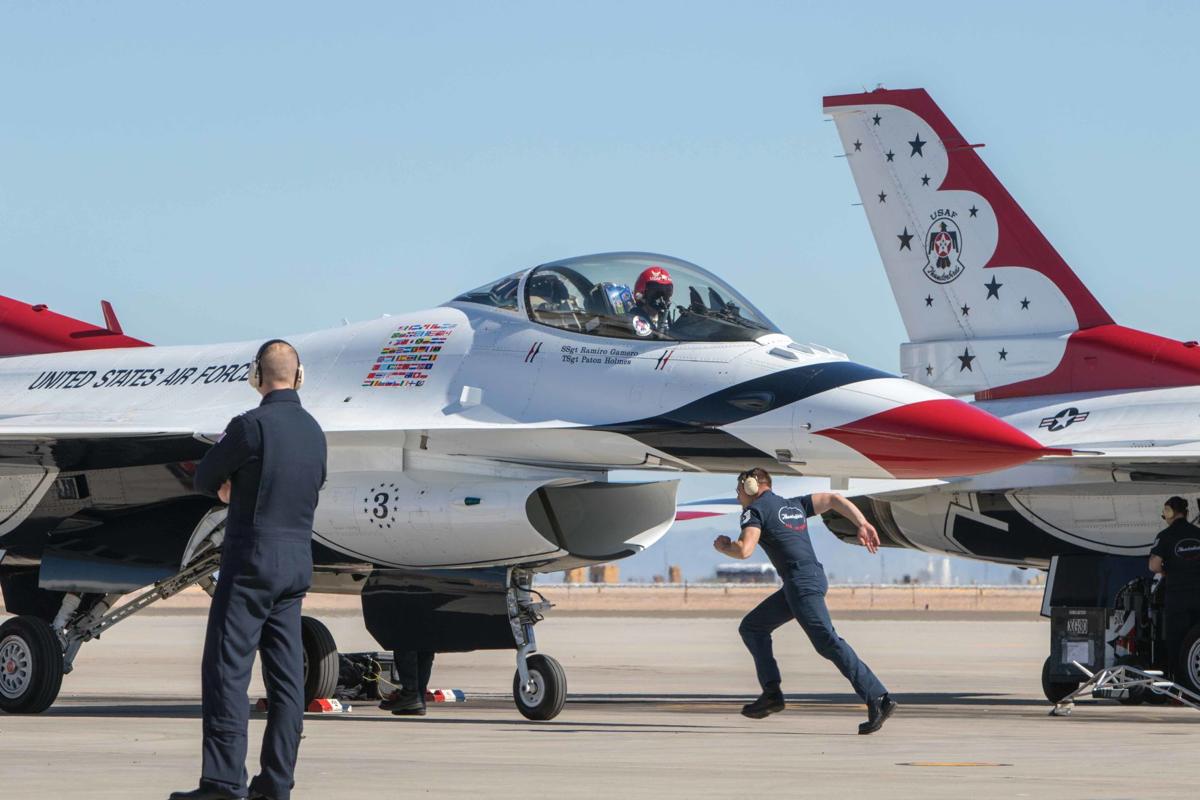 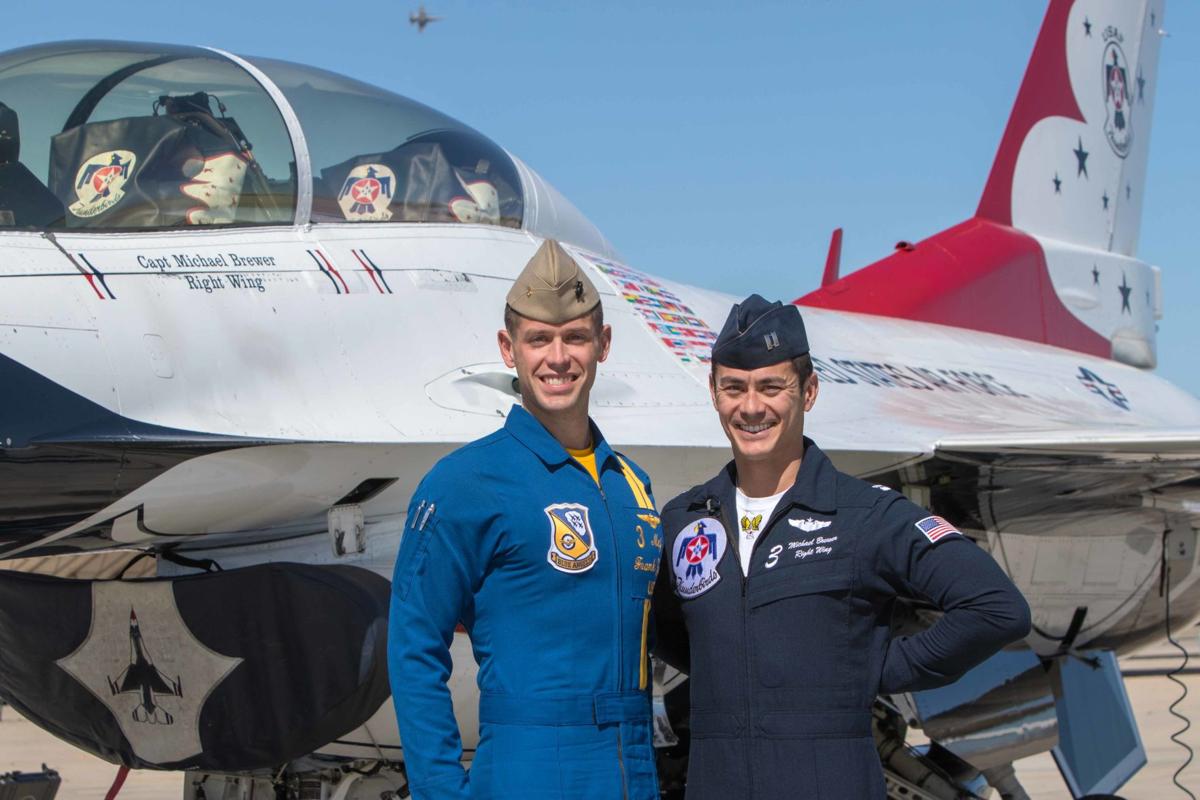 A media advisory from the Navy base stated that the two military squadrons will “trade best practices and lessons learned prior to the start of their respective 2020 show seasons.”

As Thunderbirds opposing pilots taxied their F-16 Fighting Falcons in front of the Blue Angels F/A-18 Hornet aircraft, another set of Thunderbirds left smoke trails as they circled the Navy base in preparation for landing. The squadron flew in from Nellis Air Force Base in Las Vegas.

Members from the media were assigned to specific Blue Angels and Thunderbird pilots for interviews and photo opportunities. The Desert Review was assigned to interview both #3 wingmen of the flight demonstration squadrons.

“We get to learn the trade secrets between the two teams,” said Zastoupil, who smiled together with Captain Michael Brewer, the #3 right wingman of the Thunderbirds.

Even though they have the same designated number, they have opposite positions in the aircraft flight configuration. Furthermore, according to Zastoupil, Blue Angels #3 will move to #4 position after one year; and Thunderbird #3 will stay in that position for two years.

“I like to see from their perspective the different references and how the aircraft fly close to each other,” said Brewer.

Zastoupil, expressed interest in learning about the Thunderbirds — flight demonstrations, briefings and debriefings. “I love to see how they fly their aircraft in close formation in their delta configuration.”

The visit was significant and created a milestone in the NAF El Centro.

“This is the first time the Imperial Valley —the winter training station of the Blue Angels — that we have this training (together with the Thunderbirds) early in the season prior to the first show,” said Zastoupil.

This collaboration was a fulfillment, a dream come true for Brewer. “I’ve been watching the Blue Angels and the Thunderbirds alternately since I was a little kid. Being able to collaborate both teams together and being part of something like this is enjoyable.”

Pilots from both squadrons will coordinate and train together at NAF El Centro for the week. Thus, Imperial Valley residents who are used to seeing Blue Angels honing their skills and leaving smoke trails against the blue clear skies, will see Thunderbirds in the same skies with the distinct red, white, and blue color configuration of their aircraft.

According to Captain Remoshay Nelson, US Air Force Thunderbirds public affairs officer, an advance Thunderbird aircraft arrived yesterday to survey and become familiar with the airspace in Imperial Valley.

The website, http://afthunderbirds.com/site/show-season/, indicated the opening airshow of the Thunderbirds is Saturday, March 14, at Laughlin AFB, Texas – “Fiesta Of Flight”.