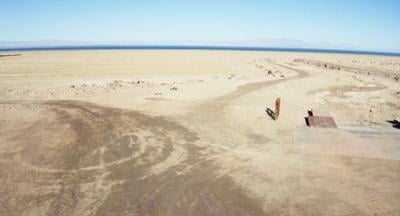 IMPERIAL — The mining company, Imperial Gold, is currently in the process of being approved by the Bureau of Land Management (BLM) to create a new gold mine by Black Mountain that would see new jobs and health benefits introduced into the Imperial Valley. The project is estimated to produce 1.2 million ounces of gold and has the potential for 20 years of production and economic activity that would include $1.1 billion in investment and more than $241 million in taxes and royalties paid to state, federal, and local governments at current gold prices.

“Not that many people know that around here, it’s actually a pretty prolific gold area that you guys live next to,” said Chief Operating Officer for Imperial Gold, Marc Leduc.

According to Imperial Gold’s site, Imperial County had the first gold production mine in the state well before the gold rush started in 1848 with Spanish settlers digging for gold in the Chocolate Mountain range. Some gold mines in Imperial County even go back as far as 1780 and are still active today with the Mesquite Mine located 10 miles away from Imperial Gold’s planned site near the Glamis Sand Dunes.

Public Affairs Liaison Frank Salazar works with Leduc to help move Imperial Gold’s project along. Salazar said there was an urban legend that originated back to how the gold was discovered in Imperial Valley in the first place. According to the legend, two young boys returned to their campsite nearby completely covered in gold after playing in the mines. This led to the very first major gold mining production in California and inspired the renaming of the mountain range to the “Cargo Muchacho Mountains” or “loaded boys” for the two young boys that made the discovery.

According to Imperial Gold’s site, mining in the area was not exclusive to gold. More than 25 other minerals like manganese, nickel, platinum, clay, and marble were produced between the 1870s and the 1960s. Some of these productions directly contributed materials used to make flares and tracer ammunition to the military during both World War I and World War II.

Leduc has been designing and building gold mines since the late 1980s and said the company is publicly traded and is trying to start a new gold mine in the eastern part of the Imperial Valley. Leduc said this is not the first time someone has sought approval to create a gold mine in this particular land. Another company back in the mid-1990s was initially interested but pulled out after being approved by the Bureau of Land Management (BLM) over controversy at the time. Other complications arose when the state issued new regulation that would require all miners to backfill the spaces they dug up.

“Anything in a mine that comes out, has to come back in, so a lot of the miners said, ‘oh forget it.’ That’s billions and billions of dollars just to take it out and put it back in,’” said Salazar.

Salazar said that it really hasn’t been profitable or economically feasible for many miners to mine in California, but that Imperial Gold is now at a place where they do stand to make a profit for their effort.

Leduc said that it could take anywhere between five and six years for the BLM to finalize everything and give them the go ahead to construct the mine. Once everything is approved though, Leduc stated it would take only one year to build the new mine.

Leduc said throughout the past year-and-a-half they have been working on getting the mine approved, another project was birthed as a result of some unexpected opportunities.

Leduc said they have been making a concentrated effort to reach out to the community and build relationships with local businesses and officials to create excitement for their mine. But what was perhaps the most exciting prospect was how their mine construction could have a direct beneficial impact on the health crisis at the Salton Sea, according to Leduc.

Leduc said Project ACES was found with the hope to do some good for the community when they realized some excess material could be used for something meaningful. Through the process of blasting rocks and earth to build their mine, a good amount of clean earth materials would be unearthed and be of use. Leduc said they would have 82 million tons of earth that resembles that of the Salton Sea. That’s when they realized it could be used to cover the toxic soils exposed by the receding sea and minimize health issues that come as a result of that.

“It is a perfect material to be used at the Salton Sea for the building of habitats, lakes, all these earth berms or earth dams, and also cover material that can actually support plant life and cover up the contaminated stuff with something that will look like natural desert,” said Leduc.

Leduc said the 82 million tons of earth materials would have a volume of 54 million cubic yards to cover in the Salton Sea. He said that covering the contaminated beaches would stop toxic dust generation and material for berms would establish man-made lakes and wetlands that form an integral part of the restoration plan for the Salton Sea.

Leduc said that Imperial Gold does not stand to make any money from providing this material and they don’t seek to profit from doing so. They saw an opportunity to help the community and that they are seeking permits to get the project to happen. Leduc said they expect that process to take 1-2 years to get the project approved. The alternative would be to place the excess earth material back in the ground.

Leduc said he feels really good about the project coming to fruition because in the past the difficulty in addressing matters like the Salton Sea is the lack of materials and whose burden it would be to collect them. Leduc said they have the materials and can provide them at no cost and feels that will be what gets the ball rolling on Project ACES.

“We’re the gold mine that wants to save the Salton Sea,” said Leduc.