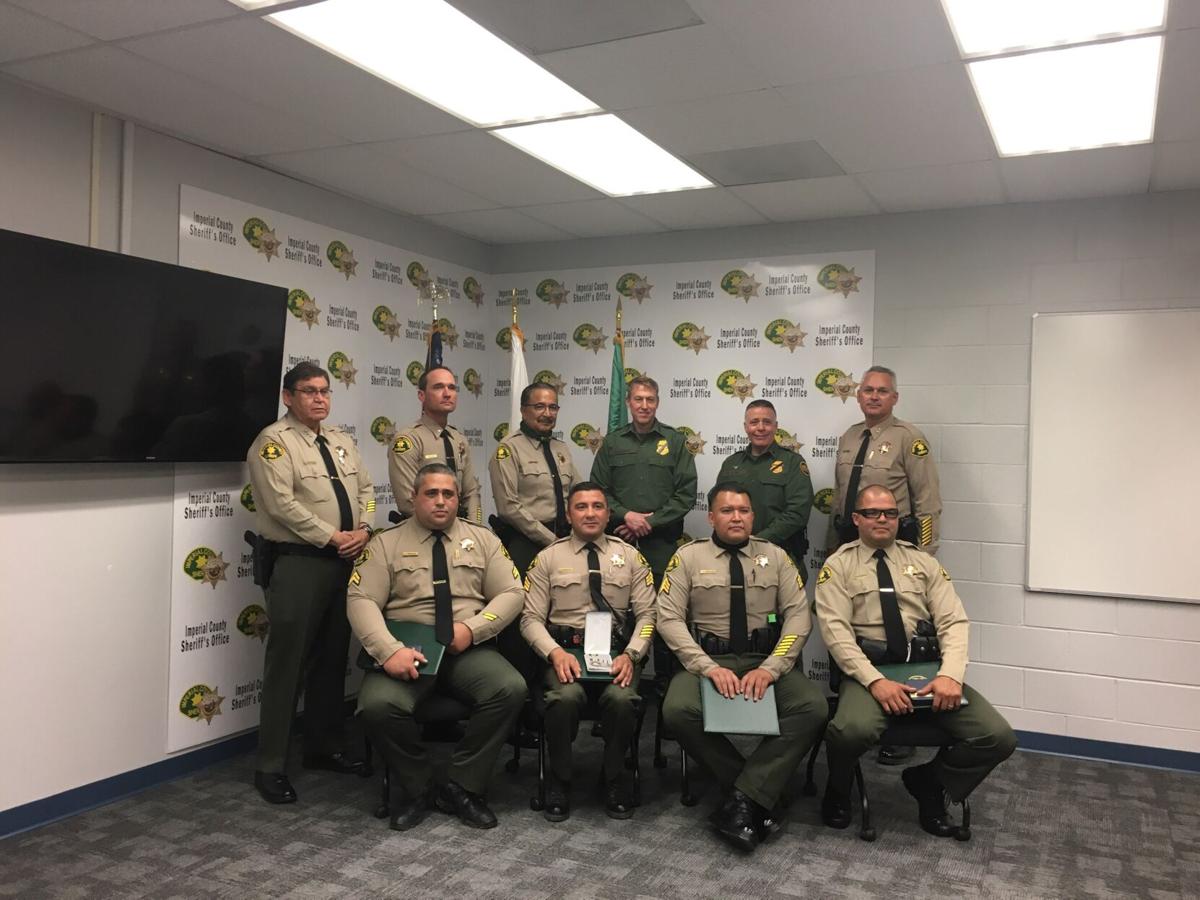 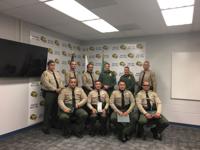 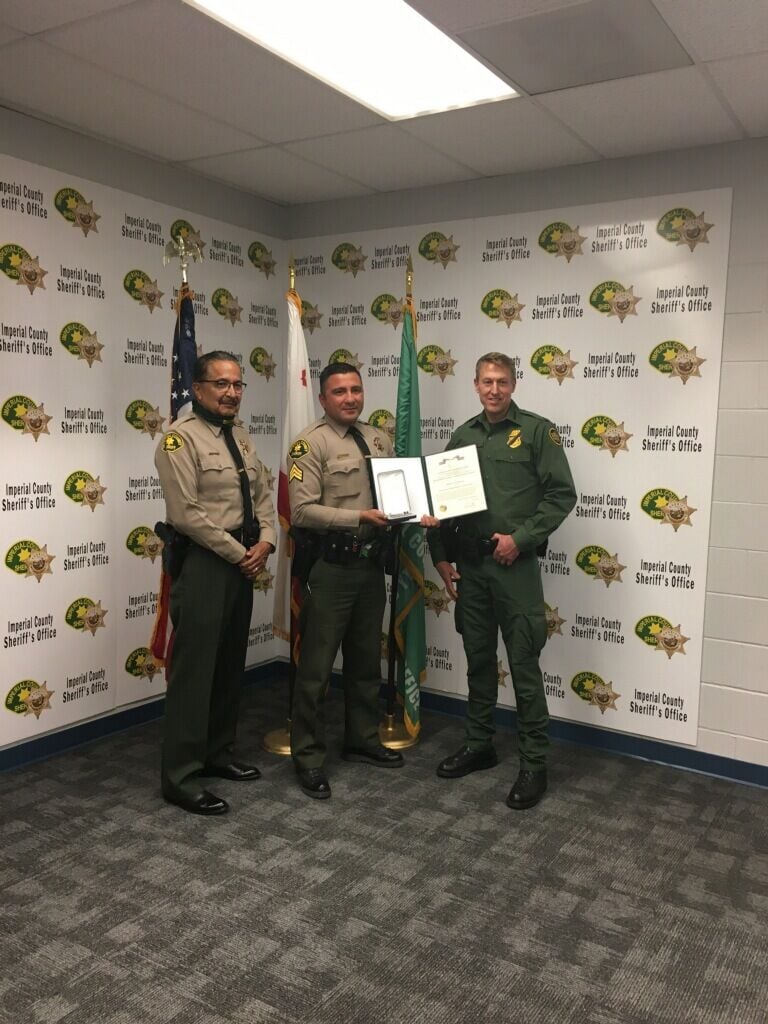 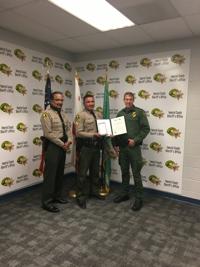 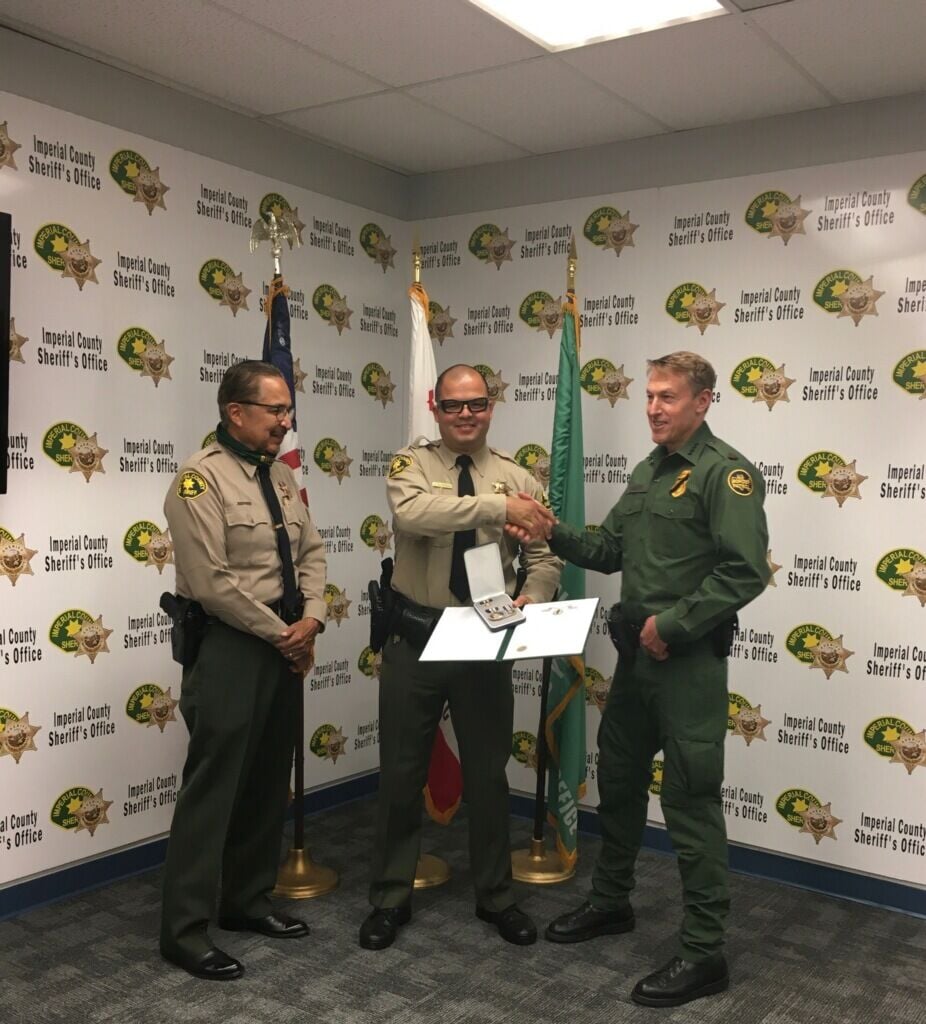 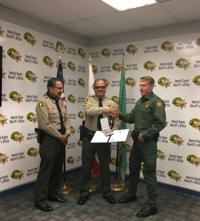 IMPERIAL COUNTY — The shine of medals of merit for four Imperial County Sheriff’s officers were accepted with much gratitude but with an air of bittersweet sentiment as they were both honored to receive the award, yet sad it came at a loss of life.

Four US Border Patrol awarding Commendation Medals for Exceptional Meritorious Achievement were awarded to ICSO officers — Sergeant Marco Contreras, Sergeant David Barbosa, Senior Deputy Duke Tanuvasa, and Deputy Ismael Gutierrez — on March 29, for their efforts to save the life of El Centro Sector Border Patrol Agent Alejandro Flores-Bañuelos, who was tragically struck by a pickup truck and succumbed to injuries while aiding those in a two-car collision on Highway 86 near Salton City on March 15.

ICSO Lieutenant Ryan Kelley said Flores-Bañuelos was on his way to clock out for the day at the USBP Indio station when he responded to a two-car vehicle accident on Highway 86 north of N. Marina Drive in Salton City during a day where high winds of 35-to-45 miles per hour with wind gusts up to 65 miles per hour were occurring in the County, according to a wind advisory from the Emergency Email & Wireless Network.

As Flores-Bañuelos attempted to aid the persons in the vehicles, a pickup truck struck him due to the severely limited visibility and the proximity of the car involved in the accident to Highway 86, said ICSO Sergeant Contreras — one of the four officers who aided Flores-Bañuelos.

“It was a heroic effort on his part to see if there was anything he could do to help, and in the process, another vehicle swerved off the road and struck him,” Kelley said.

“The call came out of the traffic collision and of course they went out there but unfortunately the wind was horrible — our guys said you could hold your hand out in front of your face and almost not see it — very, very limited visibility,” he said.

“Our guys appreciate (the medals) but at the same time, we're sorry we couldn’t’ve done more.”

“It was a great experience (getting awarded a medal) but, at least on my end, you felt some kind of guilt because unfortunately someone died for me to get that,” Contreras said.

“I was at a loss for words because the main guy from Border Patrol flew down from Washington, D.C. and it made me feel good because it just showed that Border Patrol really cares for their (agents),” Contreras said, “but I wish I would've never gotten it, so the Border Patrol agent would've lived.”

Contreras recounted the event as the four ICSO officers responded to the crash around 4 p.m., seeing Flores-Bañuelos on the ground, immediately assessing the situation which unfolded in the median between the northbound and southbound lanes, administering CPR and applying a tourniquet to his left upper leg where the pickup truck struck him, squishing him between the truck and the four-door sedan that was involved in the original collision.

Contreras said one of the ICSO deputies began CPR as he briefly checked on the others involved in the collision before radioing USBP to let them know the ICSO crew was attempting life-saving measures on the agent and to not rush full-speed to the scene due to the next-to-zero visibility in the middle of that sandstorm.

“Once I gave out that transmission, I went back to Agent Flores and gave him a sternum rub while we were doing CPR, then he was able to come back to life a little bit,” Contreras said.

“He was able to say his name in a faint voice and we were like, ‘Give us a thumbs up,’” he said, “and at that same time the ambulance arrived.”

“We were doing all this with horrible wind conditions; we were getting sandblasted,” Contreras said. “We all had sand in our eyes. The next day I had to go to the eye doctor because I had a piece of sand stuck in my cornea, that's how bad it was.”

Kelley said though there is an ambulance station near that area of Salton City, the high winds slowed response times. He said ICSO responded next-quickest to the collision because their station was nearby.

He said REACH Air Medical Services were also unable to get to the site due to the high winds and low visibility.

Agent Flores-Bañuelos succumbed to his injuries after being transported by ambulance to Pioneers Memorial Hospital that same afternoon, March 15, according to a press release. He leaves behind his wife and three children.

“We appreciate them recognizing our officers, but it definitely was not the desired outcome … there was still a loss of life,” Kelley said. “We tried everything we could.”

“I've always been to traffic accidents and trying to help out but with this one, it's somewhat personal because it was somebody in uniform,” Contreras said. “When his mom saw me, she gave me a big, big hug and it was hard to hold back tears.”

Though the officers said being honored and awarded the medals was bittersweet, they are still thankful to USBP for the recognition, saying they were a bit taken aback by the awards, luncheon, and the event being made “completely a surprise.”

“Like I told Border Patrol, they would've done the same thing for me or anybody else,” Contreras said.

“I know that we all have each other's back if something bad happens, and that day it was proven,” he said.