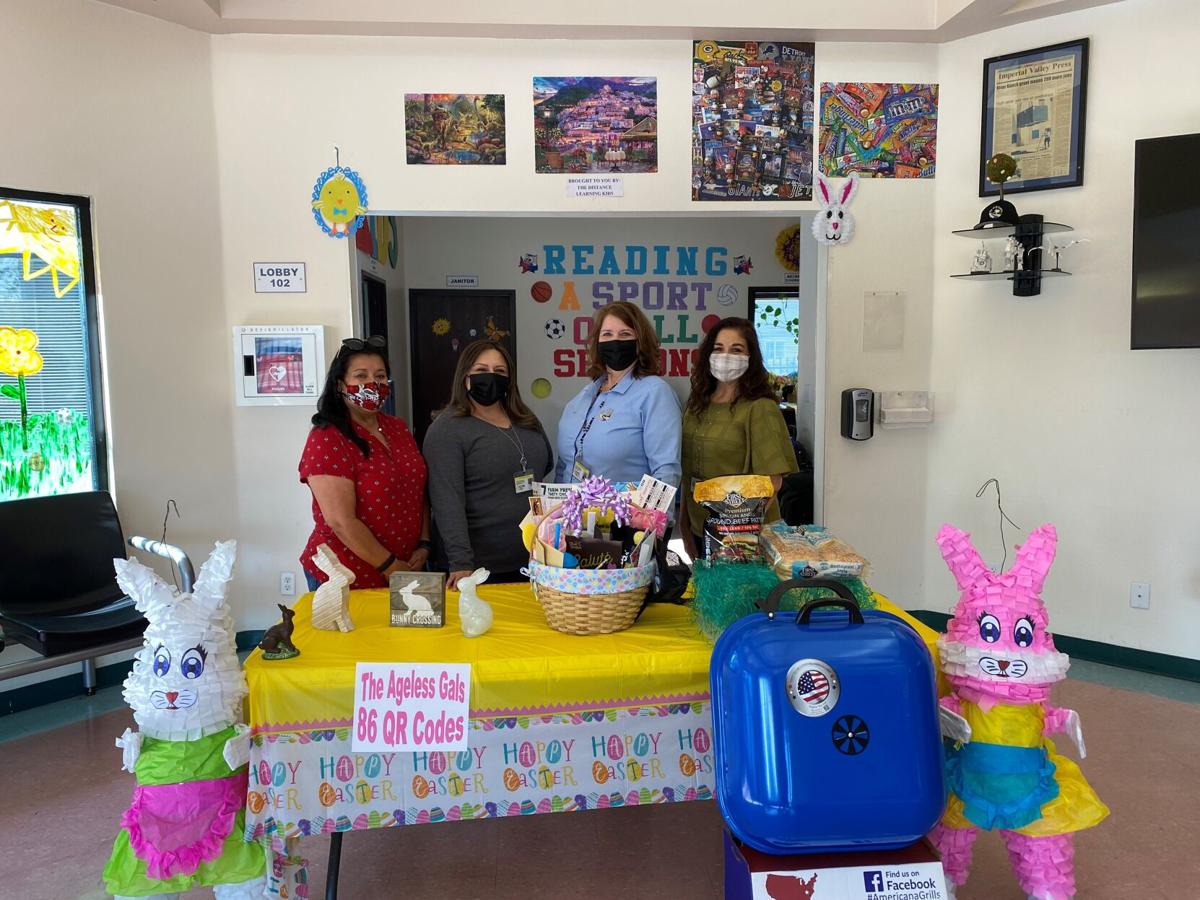 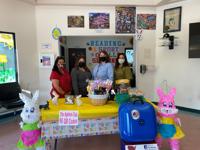 Winning team The Ageless Gals pose with their winnings from the El Centro Parks and Recreation's QR Egg Hunt, March 30, in El Centro. 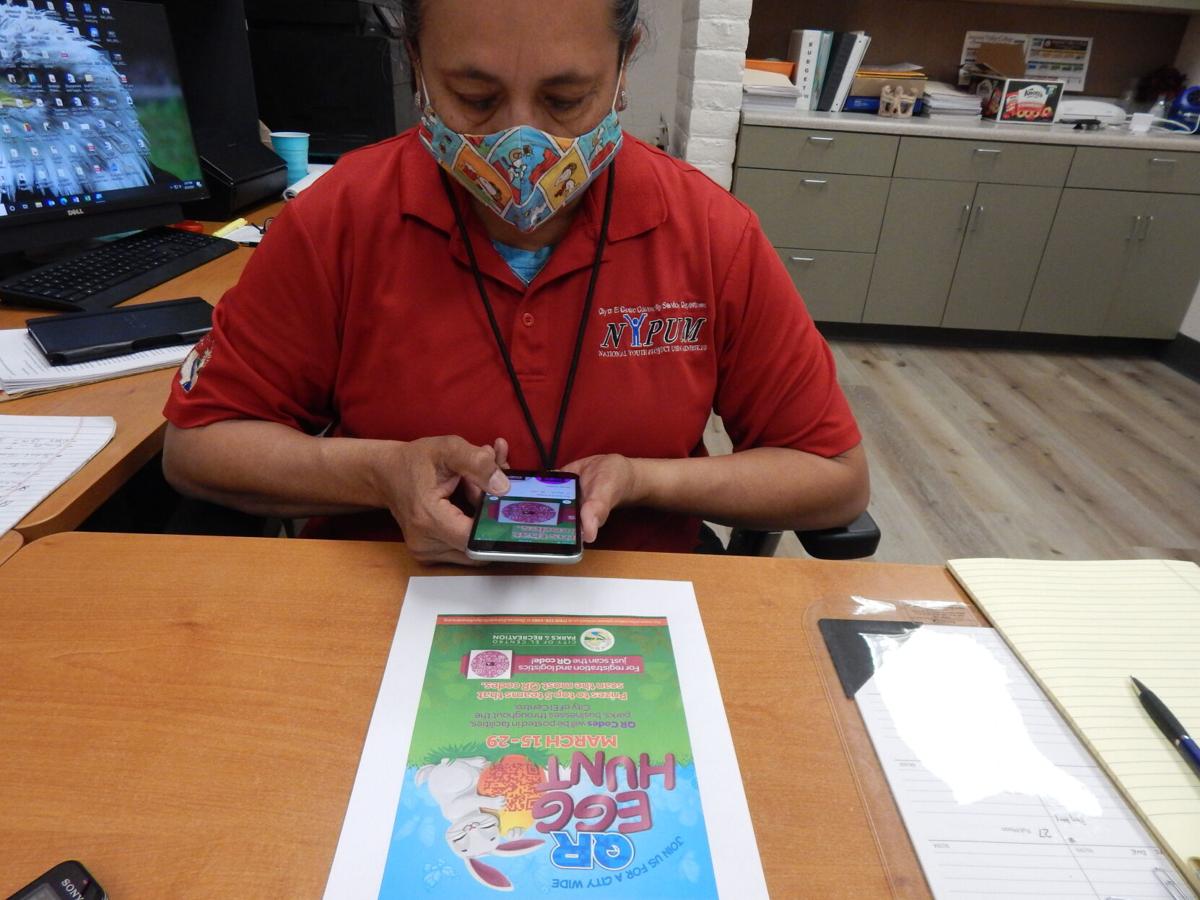 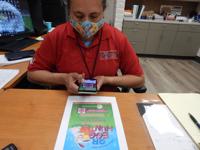 A drive-thru window view of Farmer Boys restaurant shows the telltale white and pink sticker of a QR code for the El Centro Parks and Recreation's QR Egg Hunt in El Centro.

Winning team The Ageless Gals pose with their winnings from the El Centro Parks and Recreation's QR Egg Hunt, March 30, in El Centro.

El Centro Parks and Recreation planted 100 QR codes for participants from all over the Imperial Valley to search for and scan with their smartphones as a virtual Easter Egg Hunt. The QR Egg Hunt lasted from March 15 to March 29, according to the flyer, with teams and individuals hunting around El Centro for the white stickers plastered with a pink egg and black-and-white QR code patterns.

“People want to get out, and now that we're in Red Tier, more people are going to start going out to eat, and this gave them the chance to look out for QR codes,” Ureña said.

“If you passed by a door or window of a business or building, all you had to do is put your phone over to the QR code,” she said, “and once you sent them all in, we calculated how many you captured.”

She said individuals and teams from El Centro, Imperial, and Brawley participated. By the end, six teams won prizes donated by the participating stores and restaurants, with the winning team — The Ageless Gals — finding 86 out of 100 egg-sticker QR codes.

Estrada said only one of the codes was not found by any team, the location being the Denny’s Restaurant on Ocotillo Avenue in south El Centro near the current Interstate 8 construction.

Ureña said participating in the event allowed families and individuals to view some of the improvements the City has made over the past year to some city parks and other facilities.

Estrada and Recreation Leader Evana Estala said the QR code hunt was open to participants of all ages in teams of one-to-five members.

“Most of them were really eager and happy to participate,” Estala, an event co-coordinator, said. “We had a lot of positive feedback.”

Estala said some businesses got so in the spirit — wanting to decorate their outer doors and patio areas and “go all out for Easter” — that she had to give a friendly reminder that the locations of the QR codes weren’t to be made public or obvious during the fun competition.

“I also heard from a couple businesses that they would see the people running towards the window, scanning (the code), and taking off,” Estrada said, “but (the businesses) also felt it gave them some more exposure as advertising.”

“A lot of businesses told me, 'Thank you for considering us and calling us,'” she said. “When I asked for donations, they were very generous.”

“Recreation is family and kids and joy and laughter and community ... it's been very sad the past year, not hearing all the kids' laughter and (seeing) the excitement,” she said. “So, it was nice having that back.”

“I think that everybody was really excited and happy to be a part of it,” Estala said. “I think it was a really positive thing.”

Staff Easter Egg Hunt using QR code’s is ON and the competition is severe! Check out our prizes! pic.twitter.com/34GbyFwSaf

Did someone say Easter egg hunt --- virtually? 🐰Yup, we did! This kid-friendly scavenger hunt can be completed in the comfort of your home. With the use of QR codes, all you need is a smartphone. Happy hunting!See how it works: https://t.co/zWk6YIUo0I#easter #virtual pic.twitter.com/2ife1n4AiV