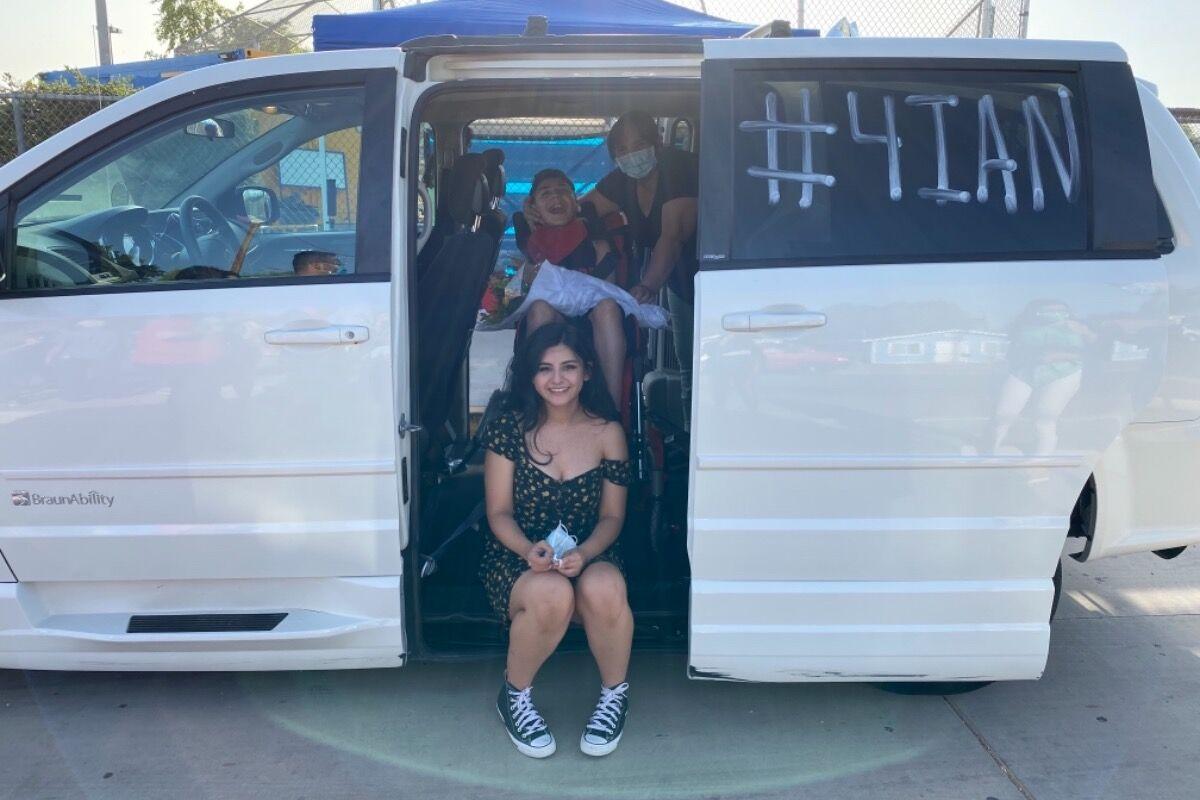 The wheelchair accessible 2013 Dodge Grand Caravan bought after successful GoFundMe and Parade for Ian fundraisers helped make the purchase possible, sits waiting for Ian Ruiz and family, May 2, in Brawley. 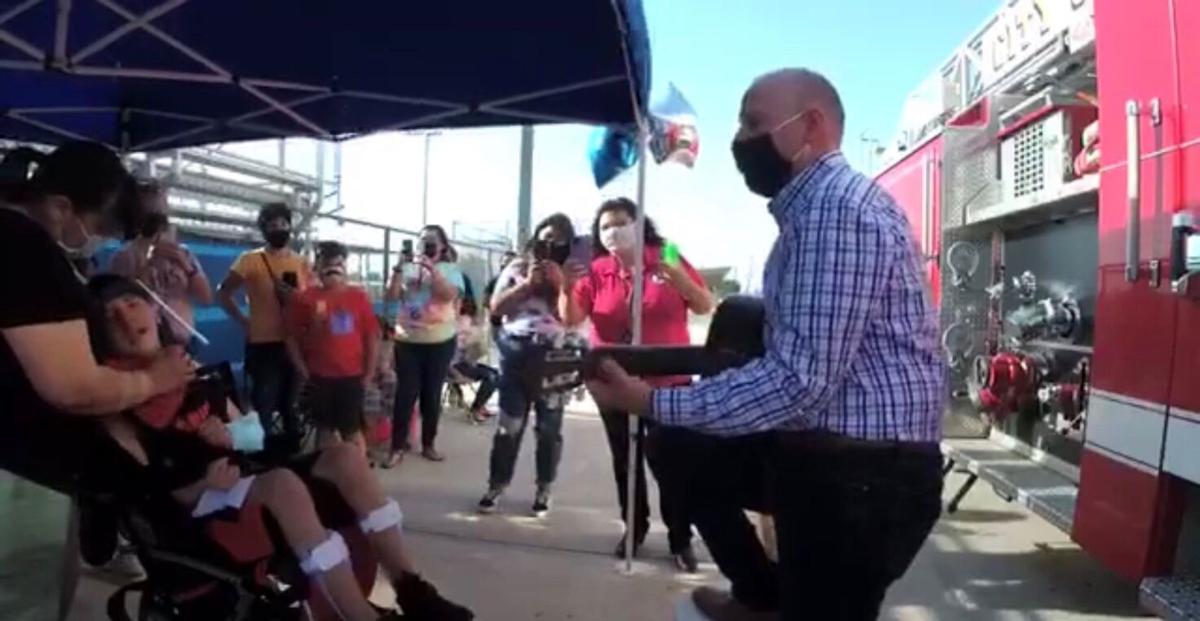 R to L: City of Brawley Mayor Luke Hamby sings to Ian Ruiz, 12, as his mother Leilani Ruiz hugs him during Ian's Fundraising Parade, May 2, in Brawley. 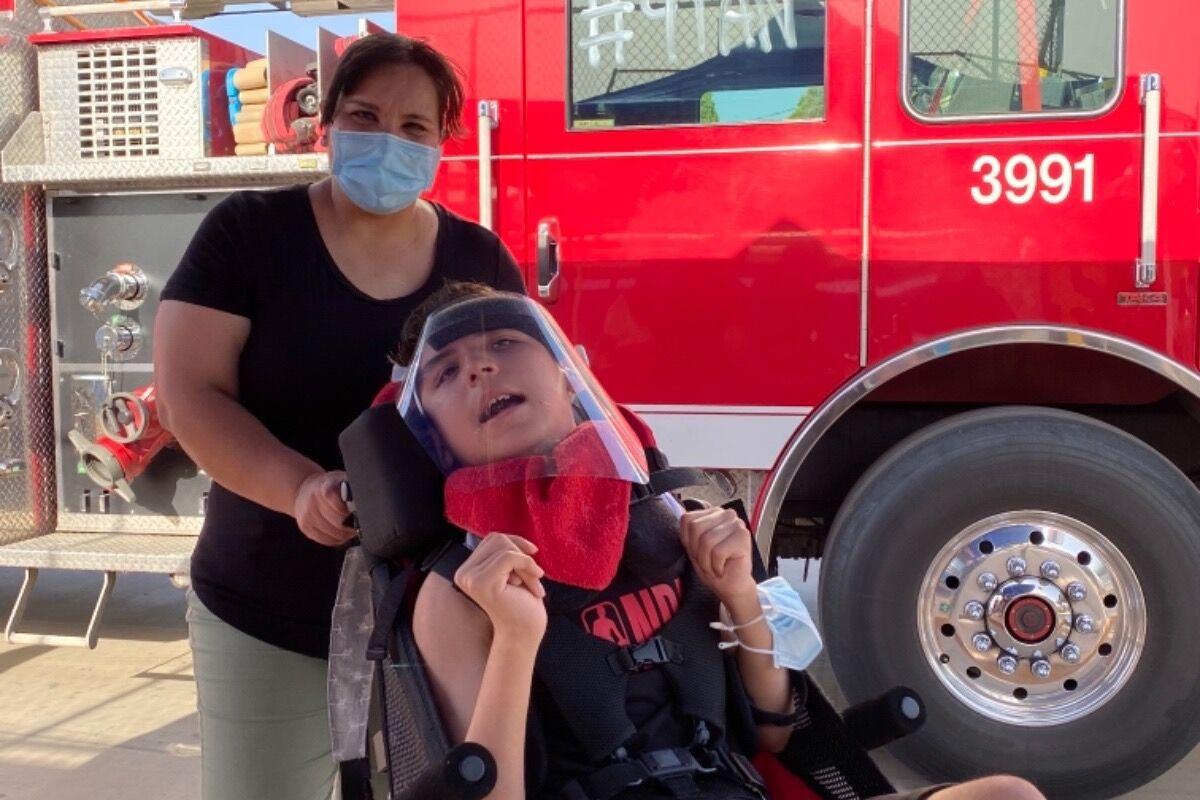 Brawley residents Leilani Ruiz and Ian Ruiz pose for a picture near a Brawley Fire Department engine for the Parade for Ian fundraiser, May 2, in Brawley.

The wheelchair accessible 2013 Dodge Grand Caravan bought after successful GoFundMe and Parade for Ian fundraisers helped make the purchase possible, sits waiting for Ian Ruiz and family, May 2, in Brawley.

R to L: City of Brawley Mayor Luke Hamby sings to Ian Ruiz, 12, as his mother Leilani Ruiz hugs him during Ian's Fundraising Parade, May 2, in Brawley.

Brawley residents Leilani Ruiz and Ian Ruiz pose for a picture near a Brawley Fire Department engine for the Parade for Ian fundraiser, May 2, in Brawley.

BRAWLEY — An elaborate scheme to surprise a loving mother and her disabled child took the form of a multi-block parade along Brawley streets, May 2, culminating with the gifting of a wheelchair-accessible van for Leilani Ruiz and her son Ian.

Friend of the family and “Wheelchair Van for Ian” GoFundMe page coordinator, Patty McDonald, also an occupational therapist at a local school for the disabled, said a wheelchair-accessible van became a necessity for Ian Ruiz as he hit his growth spurt and could no longer fit in their much smaller family car.

Ian Ruiz, a 12-year-old Brawley resident, was diagnosed with x-linked adrenoleukodystrophy (ALD) – a rare, progressive, genetic disease that affects the adrenal glands, spinal cord, and the myelin of the nervous system, severely limiting mobility, motor functions, and other brain activity.

McDonald said a wheelchair-accessible van “wasn't a luxury really, it was just a necessity by that point” for the single-parent family.

“He seemed to be in more pain when he was the back — he’s growing. That was the big thing for his mom,” she said. “If anyone ever saw the amount of effort it took her to get him in the car — probably 15 to 20 minutes, bending over and putting him in and out — it was probably not good for her either.”

“I kept telling her, 'If your back goes out, there's no one to help Ian,’” McDonald said. “She had been saving money herself but it's just really hard for her to save that much money.”

As the GoFundMe page was set up by McDonald and was shared online, the fundraising “kind of took off on its own.” According to the page, 125 donors raised just over $8,000 toward a van for Ian Ruiz. One donor — Katy Santillan of Imperial Valley Respite, Inc. — donated $10,000 all at once, McDonald said.

In fact, various organizations came together to donate toward the van, including Autism Support of Imperial Valley, Light it Up Blue Autism Support, Best S.T.E.P. Forward, First Christian Church of El Centro, and various local car clubs, among others.

During the parade, Imperial County and City of Brawley officials were present as were the Brawley Police and Fire departments, said Del Valle Car Club President Rudy “El Tanke” Rodriguez.

“We made our noise honking, revving our engines, hopping our cars with the hydraulics … we did donations from our clubs, personal (donations), and just tried to help out the community,” he said.

“Some of us in the car clubs have special needs kids also — me personally, my son (JJ) has autism — so (we) know some of the struggles and it's not easy,” Rodriguez said. “It touches our hearts to go out there and help who we can.”

Rodriguez said the parade showed about 40-to-50 cars in total, including about 28 car club cars, partaking in the event.

McDonald said the parade went from J.W. Oakley Elementary School and ended at Brawley Union High School. She said a Brawley Fire engine was the penultimate car in the parade, with the newly bought, used but in mint-condition 2013 Dodge Grand Caravan revealed to the Ruiz family at the end of the parade.

“I just remember everyone screaming at me ‘look over there’ and I looked and saw that beautiful van,” Ruiz said. I just couldn’t believe it that I started crying.”

“I didn’t know how to react,” Ruiz wrote in an email, still emotional and full of gratitude at seeing her boy’s “big, beautiful smile” spread across his face when the van was revealed.

“I was so touched and emotional to see all those people pour out their love for Ian,” she said.

McDonald said though the parade was initially thought up as a way to reveal the car for Ruiz at the end of the parade, it ended up becoming part of the fundraiser as well, raising about $1,000 toward the van’s expenses.

She said between the more than 120 donors, IV Respite’s $10,000 donation, and the others that have come in, not only was the van purchased in total, but the insurance has been taken care of for a full year for Ruiz.

All of this was done in about a two-week period, McDonald said.

Rodriguez and McDonald agreed that not only was the parade a spectacle to behold but, as Ruiz said, it was “amazing” to see the community rally around Ian Ruiz and his mother to fill a need for the young man.

“Definitely every bit of this van represents the love and support of this beautiful community and the people who made this dream possible,” Ruiz said.

“I will be forever grateful to all of them — all those angels here on Earth who donated for this cause even though they don't even know Ian — who made this possible,” she said. “I feel a ‘thank you’ is not enough but I do want (them) to know what we send you all of our love and blessings and I would like to ask (donors) one last thing: Please do not stop praying for Ian because we will continue to need all your prayers more than ever. Once again, thank you very much from the bottom of our hearts.”

To see a replay of the parade at the final BUHS stop — including a song sung from Brawley Mayor Luke Hamby to Ian Ruiz — visit Autism Support of Imperial County’s Facebook page at Parade for Ian - ASIC's page.