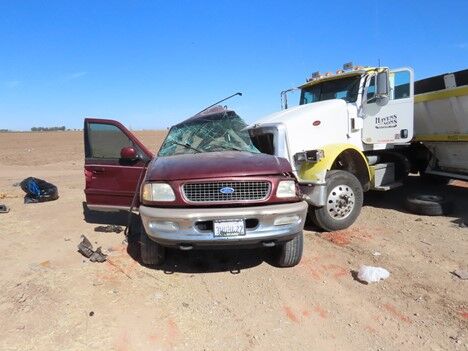 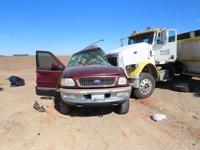 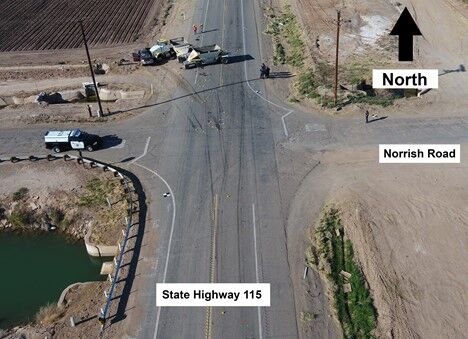 HOLTVILLE — The National Transportation Safety Board (NTSB) issued its preliminary report regarding the deadly crash between an SUV and a Peterbilt truck-tractor on March 2 near Holtville. The information in the report is preliminary and will be supplemented or corrected during the course of the investigation.

A 1997 Ford Expedition SUV — occupied by a 28-year-old male driver, a passenger in the right front seat, and 23 passengers in the rear compartment — was traveling west on Norrish Road in Holtville Tuesday, March 2, at about 6:14 a.m. The seats had been removed from the SUV's rear compartment, and it is unknown how the 23 passengers were positioned in that part of the vehicle. As the SUV approached the stop sign at the intersection with State Route 115, a 2011 Peterbilt truck-tractor, in combination with a semitrailer bottom dump and a pull-trailer bottom dump (combination vehicle), approached the intersection with Norrish Road while traveling north on California State Highway 115 (SH-115). The unloaded combination vehicle was driven by a 68‑year-old male and operated by Haven & Sons Trucking, Inc. operating out of El Centro.

Norrish Road was controlled by a stop sign at the intersection with SH-115; traffic on SH-115 did not have a stop sign. The posted speed limit for Norrish road was 55 mph and SR-115 had a posted speed limit of 65 mph with a reduction to 55 mph for vehicles when towing. According to the truck driver, the SUV stopped or slowed to a near stop at the stop sign, then accelerated onto SH-115 in front of the combination vehicle. The driver of the combination vehicle applied the brakes and skidded until the front of his vehicle collided with the left side of the SUV. The vehicles came to rest with the truck-tractor and the SUV off the road in the northwest quadrant of the intersection. The two trailers attached to the combination vehicle blocked the southbound lane and shoulder of SH-115.

The impact left the front of the truck-tractor significantly intruding into the left side of the SUV. As a result of the crash, the SUV driver and 13 passengers were fatally injured. The truck driver and the remaining 11 passengers in the SUV were transported to area hospitals for treatment. The SUV driver and the front passenger were reportedly wearing their lap/shoulder belts, and both frontal airbags deployed. Eleven of the 23 passengers in the rear compartment were ejected during the crash. The roadway and weather conditions were dry. Sunrise was at 6:05 a.m., and it was daylight at the time of the crash.

The NTSB continues to collect and analyze data about the precrash actions of both vehicle drivers, motor carrier operations, and the configuration of the intersection. All aspects of the crash remain under investigation as the NTSB works alongside the California Highway Patrol (CHP), which is conducting a separate, parallel investigation. In addition to the CHP, the Federal Motor Carrier Safety Administration and Caltrans are parties to the NTSB investigation.