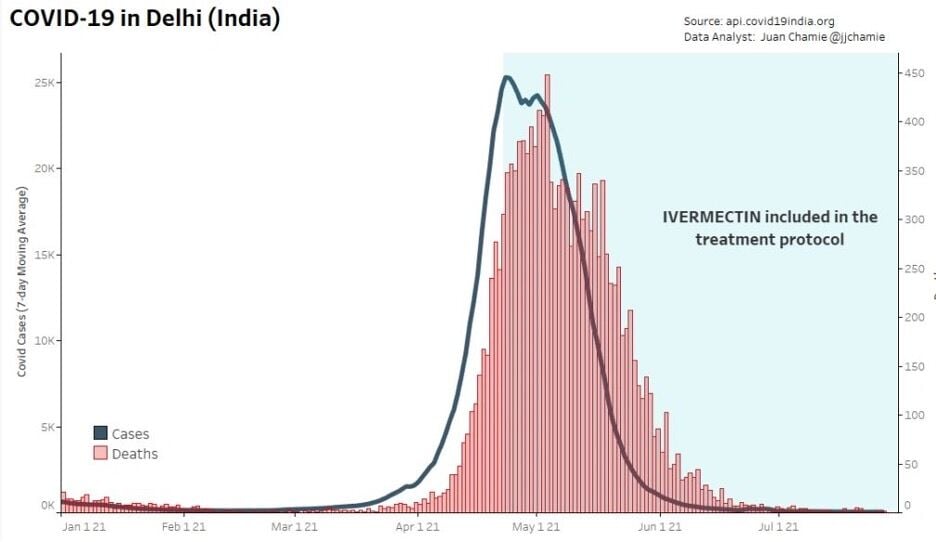 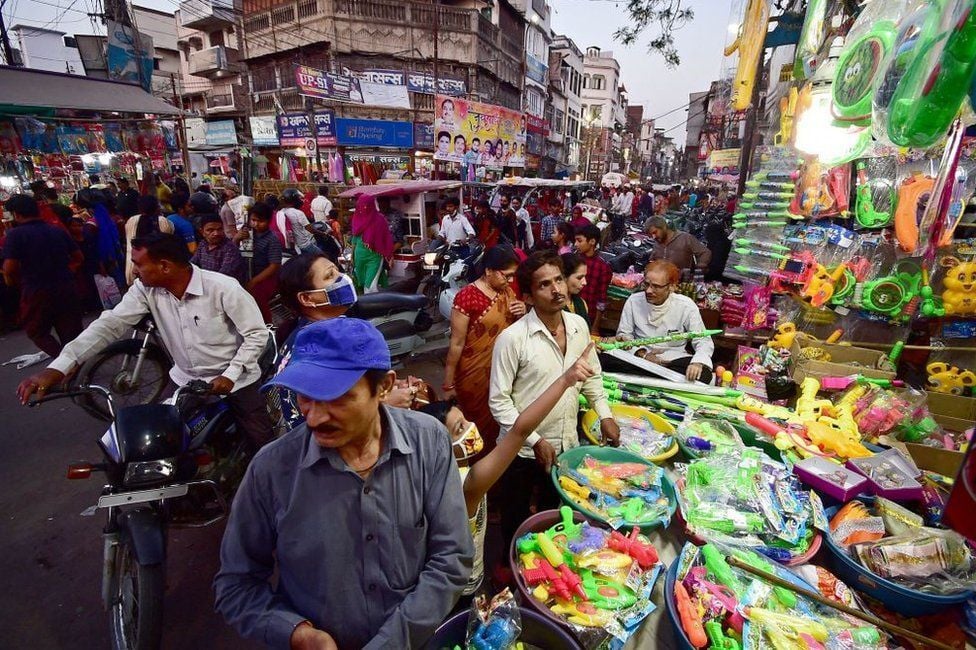 "In India — where the Delta variant was first identified and caused a huge outbreak — cases have plunged over the past two months. A similar drop may now be underway in Britain. There is no clear explanation for these declines."

TrialSite News in May reported on "Beyond the Roundup" their analysis.

TSN reported that the Delta variant outbreak exploded in the last week of March, primarily in migrant workers. A large percent of these workers, up to 50% of all Indian citizens, travel to Mumbai each year. However, during April, as the outbreak spread, many workers returned to their hometowns, and many resided in Uttar Pradesh, causing this area to explode with cases.

On April 22, the ICMR and the AAIMS groups added Ivermectin to the India National protocol, and following this, according to TSN, cases dropped exponentially.

"At the national level, the massive surge that overtook the country at the beginning of April slowed exponentially after the new COVID-19 protocol was introduced, which includes the use of Ivermectin and Budesonide." See Mark 6:58

"Cases in Uttar Pradesh, hometown to many migrant workers who fled Mumbai, have been dropping since April 24, and deaths have dropped since April 30."

The narrator stated on May 15, 2021, that "the media is resistant to report on this topic (Ivermectin)."

"An important subsequent topic of study would be to compare the transmission rates, disease progression rates, and death rates among population exposed to the current Ivermectin and Budesonide regimen versus Remdesivir and other courses of action for more granular insight into care strategies."

Subsequently, this question was answered. A natural population experiment unfolded where the Indian state of Tamil Nadu outlawed Ivermectin in favor of Remdesivir while Delhi and Uttar Pradesh continued Ivermectin.

The enormous success of Delhi was reviewed by this author twice:

The contrast with Tamil Nadu was reviewed:

The Burgundy graph above reveals the numbers in Delhi after they included Ivermectin in the protocol. Delhi is a city with 30 million inhabitants and, as of August 11, saw 37 new cases and ZERO deaths. By contrast, Tamil Nadu, a city of 78 million, saw 1964 new cases and 28 new deaths.

Tamil Nadu shares their rejection of Ivermectin and choice to use Remdesivir in common with the United States.

The evidence in favor of Ivermectin is massive and overwhelming, which includes W.H.O. scientists Drs. Tess Lawrie's and Andrew Hill's recent highly-regarded and peer-reviewed publications [for anyone who wishes to show scientific data to their doctors]:

Dr. Peter McCullough similarly published via preprint yet another review and all of these strongly showed the drug to be safe and effective against COVID-19.

What should alarm any reader is that Dr. Tess Lawrie reports that Dr. Andrew Hill's paper's conclusion was changed by his sponsor, and Dr. Hill was given a gag order on speaking to the media.

But the bottom line remains why India's Ivermectin experience remains under a media blackout. Why does the New York Times, who should know better, say it is all a great mystery?

TSN offers an answer, "Despite the (Indian) government's insistence on promoting Ivermectin and Budesonide, the media hasn't shown interest in sharing this news. (Instead), the comments continue to promote Remdesivir as an effective drug, and the few media outlets that do refer to Ivermectin call it an unproven medicine or an outdated treatment. It is as if there are two different treatment realities, (one) on the ground and (one) in the local health systems. Millions of patients are now receiving Ivermectin, yet one would never know by the media topics." See Mark 5:15.

"It's almost as if there is a blackout on the topic."

Allow me to offer an explanation. The cost of Remdesivir is $3,100 per dose, while the cost of Ivermectin is pennies.

While the US FDA is against using Ivermectin for COVID-19 outside of a clinical trial, the NIH is neither for or against and leaves the choice up to individual doctors treating individual patients as a matter of choice.

Thanks for the accurate and timely info! Too many newspapers are refusing to report on anything the FDA and WHO don't want to say. But 100% of FDA "Phase 3" trials are corporate sponsored, because it's a Poll Tax where millions need to be spent. And while the WHO is a UN govt supported agency in appearance, in reality it is 70% corporate sponsored by the pharmaceutical industry. The WHO knows to expect layoffs if they don't respect their funders.

The press gets a huge amount of it's sponsorship from Big Pharma as well.

Normally I reject "conspiracy theories" because conspiracies are hard, they take work, bureacracy, and we would find out about them. In this case it's not a theory. The org that's running the coherent Only-Vax message, is in the open. The Trusted News Initiative by the BBC and other news outlets.

So we have the only-vaxxers vs the anti-vaxxers and any other viewpoint is marginalized.

We need vaccines AND therapeutics. We need our COVID drug cocktail, just like the HIV drug cocktail. That's not a reason not to want a vaccine.

But there are 151,000 infected people in the USA and it's too late to give them a vaccine. We don't need to tell them to go home and let the disease fester until they are blue in the face and come in to ER to die. It's a treatable illness. It's not wrong to try safe things under compassionate use.

Your essays on this topic are great, but I think you are omitting an important point. Therapeutic use of ivermectin might explain a drop in death rate, but not the disappearance of the pandemic. It's my understand that the protocol also includes a crucial preventive component - when a new patient is identified, not only is the patient treated, but ivermectin is given to every member of his family, every close neighbor, and other close contacts. That way, the patient's infection won't spread to others. This targeted "contact prophylaxis" strategy is entirely logical and, if implemented consistently, seems very likely to snuff out the pandemic - precisely what we are seeing in Delhi and Uttar Pradesh.

Is this your understanding too?

Watching the linked video I notice they showed a portion of the document that did help me find it but did not show the recommendation. The video says India recommended but the document says "Consider Tab Ivermectin (200 mcg/kg once a day, to be taken empty stomach) for 3 to 5 days." Would a doctor view recommend vs consider the same or is their a subtle difference? Thank You

Mr Penn, you seem to suffer from delusions, hopefully it is just a passing phase; but what you have written is so divorced from reality it is difficult to respond, other than saying "Bullshit"

There are so many logical fallacies and egregious inaccuracies in this article. For anyone really considering taking a horse /animal worm medicine to treat a virus really needs to look at the independently peer-reviewed studies.

A) this has been tested on less than 5,000 people, showed no reduction in duration or severity from the control groups, and the study was retracted from the journal for plagiarism, and sloppy study. This opinion piece should not be featured on the front page of The Desert Review. It diminshes the credibility of this entire news source... if it is in fact an actual news source and not a opinion based blog. I have reported The Desert Review for review by NewsGuard so that it is flagged for inaccurate reporting.

Clearly you didn’t read the article nor did you read the links. Also, the article didn’t mention animal Ivermectin. Ivermectin is a WHO Essential Medicine for humans. Billions of doses have been used with good safety when dosed according to weight.