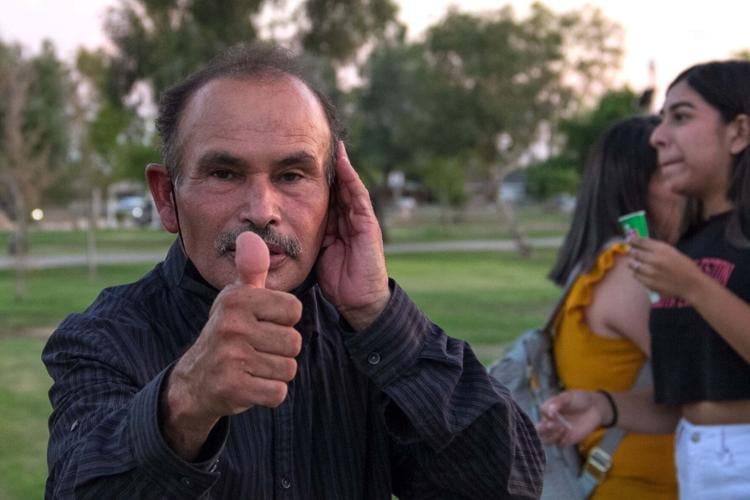 “Paletero” Hector Carrillo shows his signature sign of approval at Bucklin Park. Loyal customers raised funds to purchase a refrigerated ice cream cart for “El Paletero” which was presented to Carrillo along with popsicles and snacks, Tuesday, September 13, in El Centro. 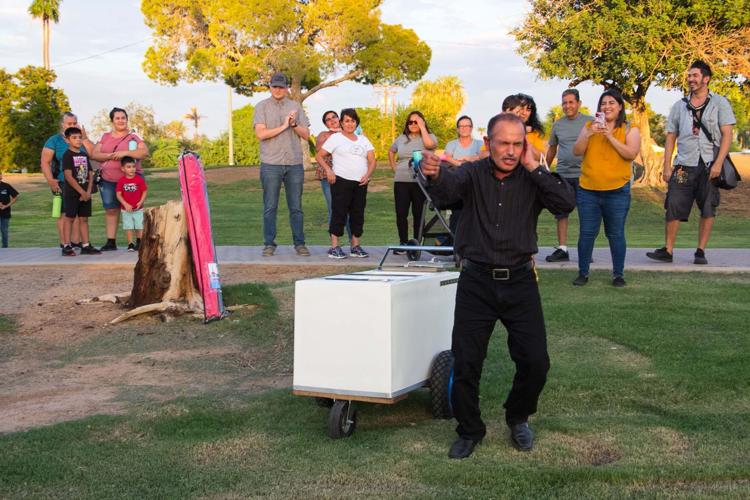 “Paletero” Hector Carrillo demonstrates his signature shrill to attract customers. He expressed gratitude to loyal customers for a brand new refrigerated ice cream which was presented to him at Bucklin Park in El Centro. JOSELITO N. VILLERO PHOTO  Tuesday, September 13, 2022

It was a reunion of loyal customers whose memories of childhood were frozen in time when they purchased “paletas”, or cold popsicles, from street vendor Carrillo. Many residents called him “Paletero”, translated, a popsicle salesman. Others prefer to call him “Campeon”, a champion.

Children, parents, and grandparents showed up at the ramada area on the north side of Bucklin Park, close to Ross Avenue. Behind the building, a team of teenagers played soccer. Other individuals went on with their late evening walking exercises around the park.

These loyal customers converged at about 6:30 p.m. and shared each other’s memories of childhood with their beloved “Paletero”, their “Campeon”. A few were seen taking selfie-photos with Carrillo.

Organizer Virginia “Viki” Ramiro and her team of volunteers, including her cousins from Yuma, AZ, arrived bringing boxes of chips and snacks and pushing a new white refrigerated cart towards the ramada. They were met by Hector and Celia Carrillo, their children, and their families.

After some greetings and introductions, Ramiro presented the new cart and the boxes of goodies to Carrillo. Ramiro also gave the remaining cash collected to Carrillo who responded with gratitude to his loyal customers—now adults with their own children— surrounding him. The audience cheered and took photos and videos of their favorite Paletero.

On several occasions, Ramiro demonstrated his signature shrill call to the amusement of his followers; which also brought back memories of their childhood anticipating this same call to buy paletas.

Paletero Carrillo opened the compartments of the new carrito and invited the children and their parents to get free paletas. Some individuals paid the Paletero. Many children were seen eating ice cream and popsicles before they melted in the summer heat. The soccer team came later in the evening after practice and surrounded the new carrito to get the remaining free paletas. The coach and the team thanked Campeon for his generosity.

“This guy had just good memories with me,” said George Miranda, who became emotional as he described Carrillo. “My children grew up in baseball and football sport events. He was always around and made his theatric moves.”

According to Miranda, Paletero shouted, raised his hand, and lifted a leg as though he was about to fly. His distinct shrill cry announced his presence in the neighborhood. It was a signal to children to come out of their homes, or to take a break from games to purchase popsicles and bags of chips from Paletero.

“He works all the time. He has a very impressive work ethic and attitude,” said Miranda, who came with his leashed pet dog.

Chelyssa Moore and her family joined in the celebration. According to Moore, Carrillo was their their family friend. “He is really good to our child.”

Moore’s son, Xavier Jimenez, 3, held an ice cream cone with chocolate and nuts. He ate beginning from the bottom of the cone leaving the ice cream to melt and drip. “It tasted good,” said the child.

“I’m really glad to be a part of this celebration,” said Moore.

Virginia “Viki” Ramiro saw a video of Hector Carrillo posted weeks ago on social media with appeals to viewers to help “Campeon” with his small mobile “carrito” business. That prompted Ramiro to start a GoFundMe account to mobilize the community.

The account was opened on August 4 with a goal of $2,500. But to her surprise, Ramiro saw the community rally to raise $4,000 by that evening. Donors gave an average of $5 - $20. Others, gave larger amounts. By the time the account was closed a week later, the amount had reached over $7,500.

This was a testimony of a community who uplifted a paleta street vendor who sold popsicles to build memories in the hearts of children, parents, and families.

The raised amount was more than enough to buy a fully equipped cart. In consultation with Carrillo’s family, additional items were purchased. Ramiro and her team shopped in Calexico and El Centro for dry ice, popsicles, boxes of chips, and snacks.

According to Ramiro, her team of volunteers also purchased personal items such as clothes and a pair of shoes. The remaining amount— $5,900 was presented to their beloved Paletero.

The “carrito” was imported from Guadalajara in Mexico, according to Ramiro. But it was still far from completion. There were plans to install decals and an umbrella on the cart.

As a six-year-old child, Ramiro remembered anticipating meeting Paletero Hector right after church services at Saint Mary’s. “I bought Tweety paletas from him.” Tweety is a yellow canary from the Warner Bros. Looney Tunes and Merry Melodies cartoon.

“I may have organized the fundraising but it was the community who supported Paletero,” said Ramiro, who is now in her twenties.

“I thank everyone who helped our Paletero,” said Virginia “Viki” Ramiro.