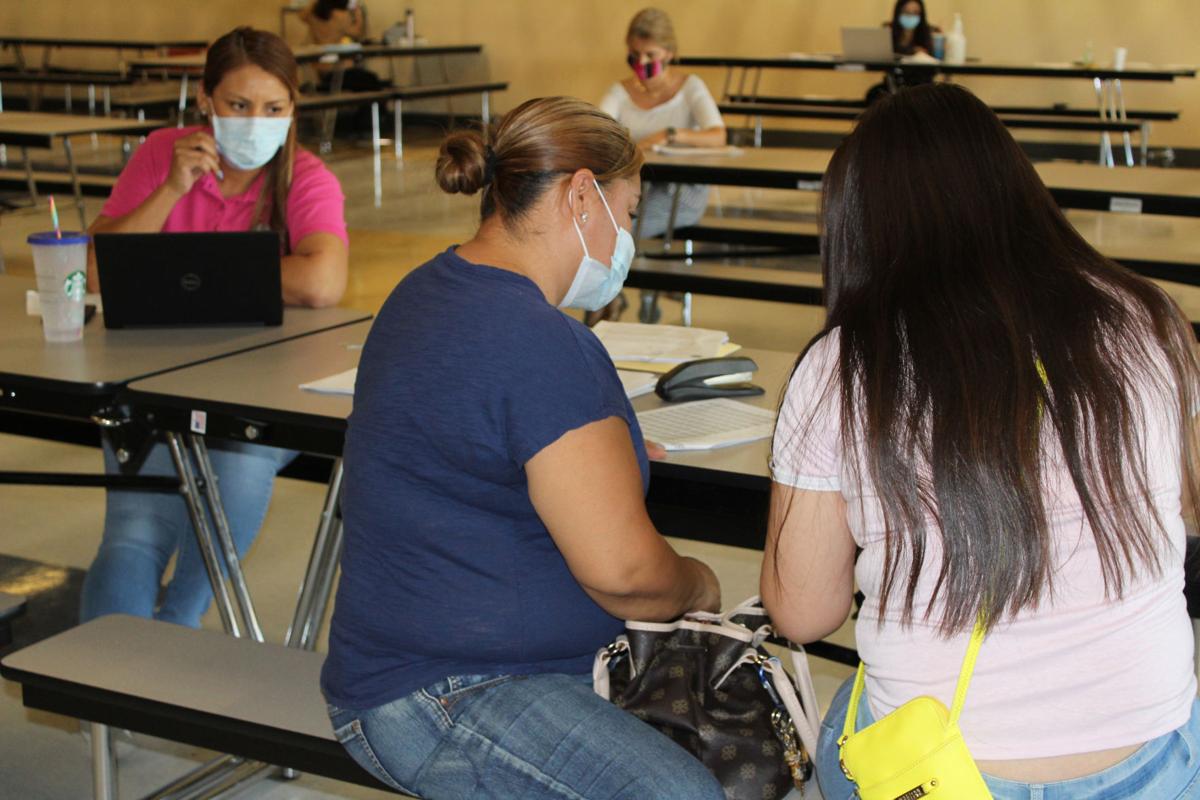 A family gets help at the Local Assessment Center at the Calipatria High School auditorium. 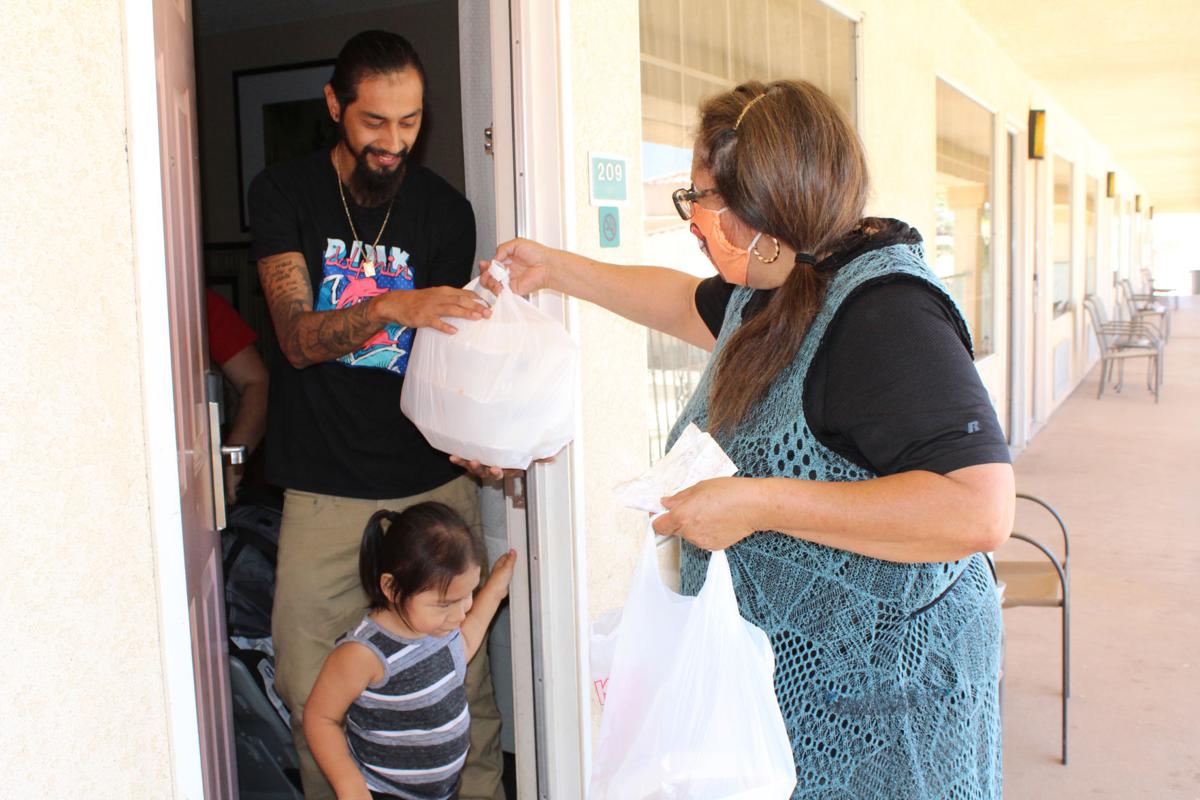 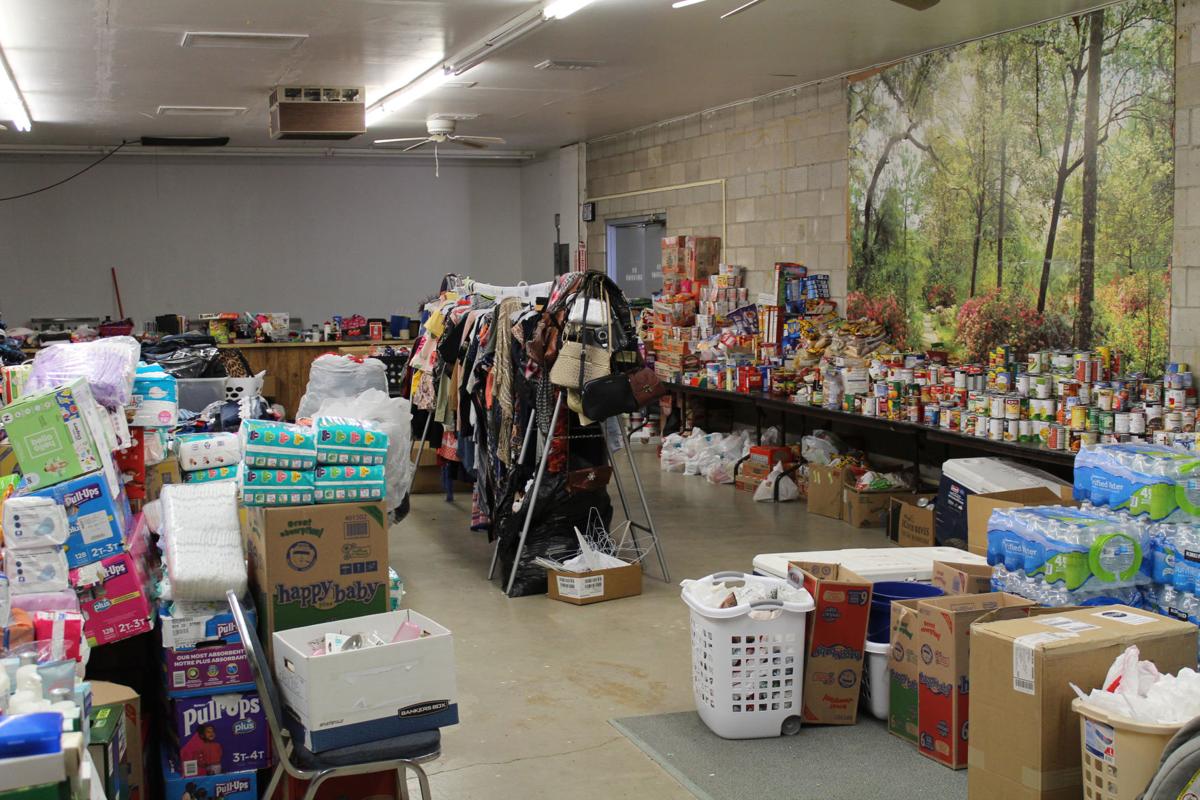 The Niland Chamber of Commerce building is set up with food and supplies for Niland families who were affected by the fire.

CALIPATRIA — A week after the Niland fire, relief is still coming to the families who now find themselves without a home.

Maria Cristobal was one of many who was in the path of the fire. She saved both her and her mother’s houses by watering them down with hoses. However, she watched as other homes in the neighborhood burned to the ground.

“It was traumatizing, it was like a warzone,” said Cristobal. “I really thought Niland was going to burn down.”

Niland did not burn down, but 37 structures did, leaving 43 families displaced. Evacuated families were housed at the Calipatria High School gymnasium the night of the fire and early the next day. By evening, they were moved to homes of relatives, shelters, or local hotels.

Cristobal was back watering her garden not long after the fire but felt immense guilt for having made it through the fire when her neighbors’ homes did not.

“I felt so guilty, I started crying,” said Cristobal. “I thought, ‘I have a home, I’m watering my plants, and they have nothing.’”

That day Cristobal decided to begin volunteering to help at the Calipatria Family Resource Center as one of the meal runners. The resource center has been making deliveries of hot meals and breakfast since Friday, July 3, to the families who have been displaced by the fire.

All meals are delivered by runners like Cristobal to the families staying in the Calipatria Inn and the Niland Chamber of Commerce for distribution. Cristobal knocked on doors with a friendly smile behind a mask, exchanging greetings with families accepting meals for the day.

Food has been coming from all over the County — from churches, to families in the community. Martha Mata, a volunteer at the Family Resource Center, said a family from El Centro donated plates of hot dogs and chili — special for the Fourth of July.

Monday’s meal of 100 plates was provided by the Romero-Ramirez family, and Calipatria High School Superintendent Douglas Kline jumped in to help in the kitchen to provide meals.

The meals are just one of the many donations that have come from a generous Imperial Valley community. Director Maria Nava said the center received a pledge of four trailers for families who need them.

Meanwhile, the Imperial County has set up a Local Assessment Center (LAC) in the Calipatria High School auditorium to assess all of the residents impacted by the Niland fire. Imperial County Deputy CEO Esperanza Colio-Warren said the LAC brings together different county agencies and organizations to aid the families.

The LAC assesses whether a home was completely lost, special needs, childcare, income level, and the general needs of the household. Colio-Warren said 28 families have come to the LAC for assistance so far. Without the families coming, the County won’t know the full extent of the need in Niland.

“I am just so proud to belong to a county that is so hands-on when it’s a matter of assisting the families that have been displaced when it comes to a natural disaster or even an eviction notice,” said Colio-Warren.

Colio-Warren said there is currently a focus on housing to ensure no family ends up homeless. The County is hoping to help with rapid housing — through hotel vouchers or temporary housing with a trailer.

Clinicas De Salud was also in Calipatria last week to provide for individuals with specific medical needs that were affected due to lost medications in the fire. Comite Civico del Valle provided hotel vouchers that allow for a 30-day stay, just in time before the current Red Cross vouchers end.

At the Niland Chamber of Commerce, the community has been stocking up its warehouses for the families that will be coming in for supplies such as food, clothes, and hygiene supplies.

Treasurer Debbie Solis said the Chamber has received donations from AmeriCorps, the Calipatria State Prison, Our Lady of Guadalupe Church, Bombay Beach, San Diego, Coachella, and so much more from within and outside the Imperial Valley.

Solis said the Chamber is asking for donations of items families will need for a home. The end goal is to get them all in a home with all the conventional items of a family home.

Wednesday through Saturday from 8 a.m. to 1 p.m. the Chamber will open its doors for the families affected by the fires to pick up whatever they need.

The Calipatria Family Resource Center is asking for donations of water, Gatorade, beans, rice, pasta, canned food, Ramen noodles, cereal, eggs, potatoes, bread, air mattresses with pumps, walkers and canes, hygiene products, and home utility items such as microwaves and toasters. Utility items will be needed when families begin to move back into more permanent accommodations. The center does not need any more clothes, according to Nava.

Anyone in brawley still taking donations for Niland?

A brush fire ravaged the town of Niland, California on Sunday, June 28, 2020, killing one person, displacing more than 150 residents, and destroying 40 structures. I have been photographing in the area for years and… https://t.co/iAjXTsUvHC

IID employees raised $3,715 for the families in Niland who were affected by the recent fires. Today, they presented a check to the Calipatria-Niland Families Resource Center-Niland Fire Fund. pic.twitter.com/J1TJgkqFEa

My sister Eva Worthy has lost everything in the Niland, California fire. If you have a few dollars can you please help She needs so much replaced. Thank you everyone. #niland #nilandfire #help #townfires https://t.co/In1CncgdD3

One of the families who lost their homes to a major fire in Niland last week is asking for the communities help in rebuilding their lives. https://t.co/FAukKJ5tqv

On Sunday, June 28, 2020, a three-alarm brush fire destroyed more than 40 homes, in particular the home of a San Diego Regional Center family, whose youngest child, Mickey, is served by Early Start. https://t.co/X7Ws01msDA