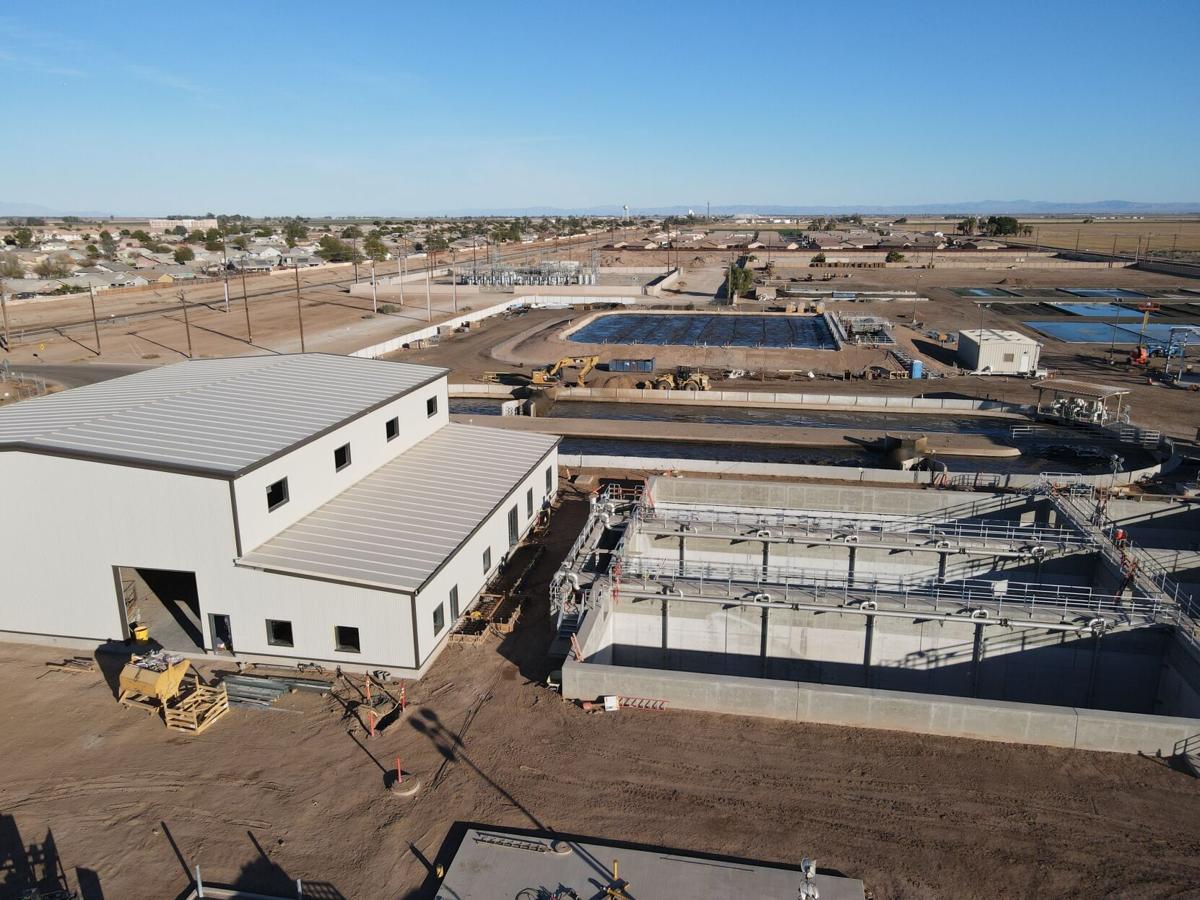 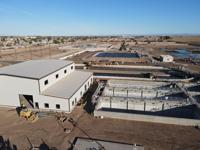 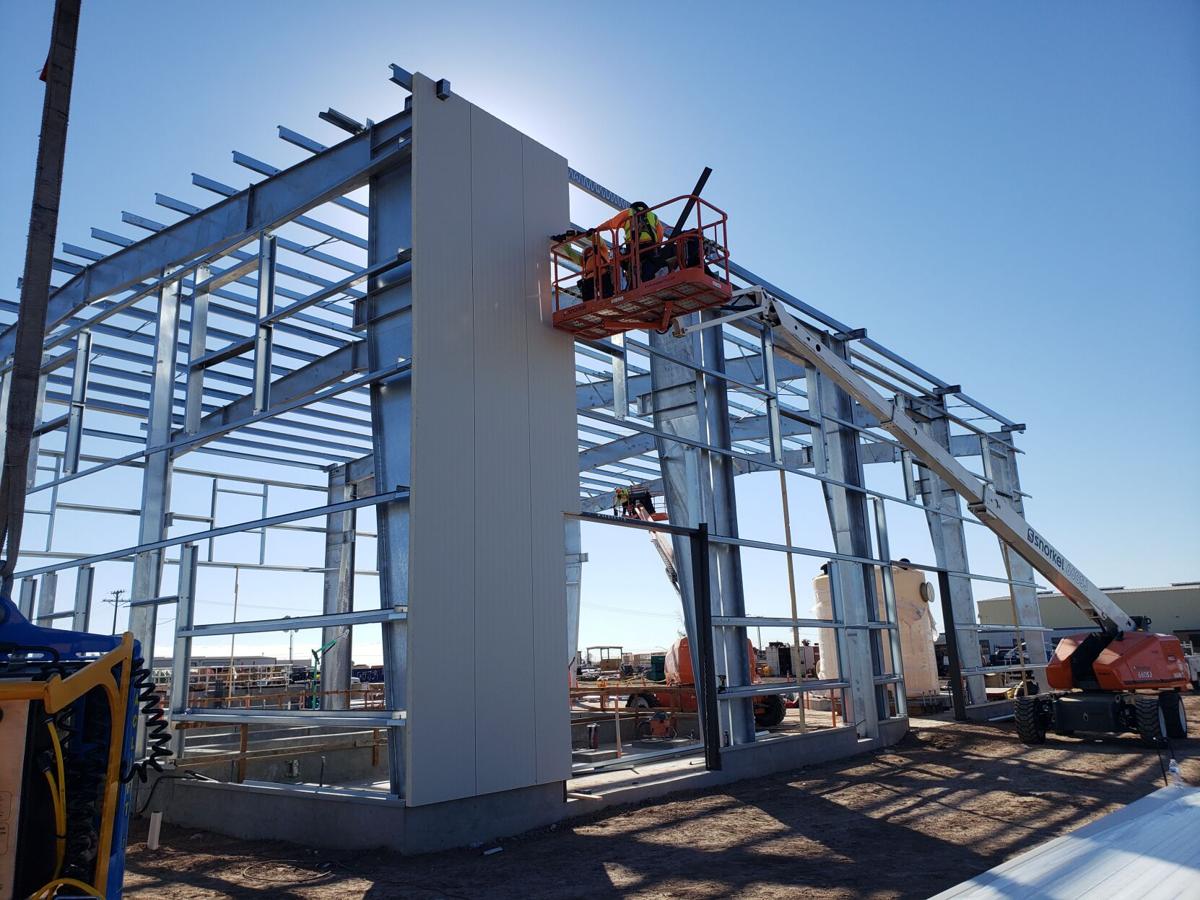 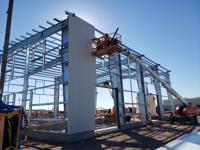 An undated photo shows a new building being erected as part of the City of Imperial's new Membrane Bio Reactor Wasterwater Treatment Facility in Imperial.

An undated photo shows a new building being erected as part of the City of Imperial's new Membrane Bio Reactor Wasterwater Treatment Facility in Imperial.

IMPERIAL — What was once a change order will now become a new $186,000 electrical housing building for Imperial’s Wastewater Treatment Plant after the City Council voted unanimously to approve an action item at a meeting held January 6.

The plant — located at 702 East 14th Street in Imperial — is an ongoing project which the City began in December 2019 but has been trying to secure adequate funding for a long time, said contract consultant Brian Knoll, vice president of Albert A. Webb Associates. Due to previous budgetary concerns, other items were given priority in the past

“The existing headworks inflow pump station building, the whole area has been problematic for years,” Knoll, the design engineer for the project, said.

Knoll said the equipment that sits in and around the building in question has been subject to hydrogen sulfide corrosive gasses and has brought challenges to the plant for more than 15 years.

“Initially, the manufacturer had indicated to us that the system they were going to be able to provide that we designed around would be able to handle all the airflow and air changes to get fresh air into that building,” Knoll said. “As we've gone through it, we've continued to see degradation of equipment and electrical cabinets that are in that building.”

Knoll said as the project unearthed the extent of the problems, the designers said the City’s two options were either to continue to do maintenance and “putting Band-Aids on it,” or build a new electrical building to get it out of the corrosive area.

Knoll said contingencies within the current budget which were approved previously would allow for the added costs — $186,515 in total — as opposed to approximately $85,000 on maintenance “that doesn’t get rid of the problem” and would still need full replacement in 3-to-6 years.

“I don't really think of this so much as a change order for unforeseen or unknown conditions,” Knoll said, “this is just cleaning up something that, had we known that there would be this money available, we probably would have done it this way in the beginning.”

Councilmember Katie Burnworth questioned why this was not included in the original plan when pricing for the construction bid was competitive. “So now you’re kind of just setting the price for yourself, so that’s the only thing I actually have a problem with that I don’t like,” said Burnworth.

Jackie Loper, director of the Public Services Department for Imperial, said the discrepancy was due, in part to, “doing everything just to award the budget at the base unit” at the time it was originally proposed.

“Like Brian said, we're now above ground. We're building in our buildings as the design,” Loper said. “There may be some little things, but we don't foresee anything at this point, which is why we've brought this back to consider it now.”

Knoll said the change order is not for the designers, but for the construction company handling the project. Councilman Robert Amparano also called some attention to the contractor’s 15 percent overhead, but said after seeing the progress, he appreciates all the work being done.

“I know we can’t foresee these things, but I think it’s one of those things that maybe for future building maybe we should — like Katie said — try to throw that in there and work the best we can,” Amparano said.

“I do feel that we would need this and benefit from this as a City,” Burnworth said, “but just moving forward if we can be a little bit more specific when we write contracts and put out stuff for bid so we don't have as many change orders in the future, especially ones as large as this.”

“We could certainly have listed lots of different alternates in the bids and this could have been one of them that could have been handled that way — that's a fair point — but this is really a project enhancement that is handled as a change order,” Knoll said.

“There's other change orders for unforeseen conditions (the City doesn't) get any value for,” Knoll said. “This is something that the City is getting significant value for this money.”

Assistant City Manager Alexis Brown said with the City Council's approval of the change order, the new wastewater treatment plant is set to be completed by summer 2021.