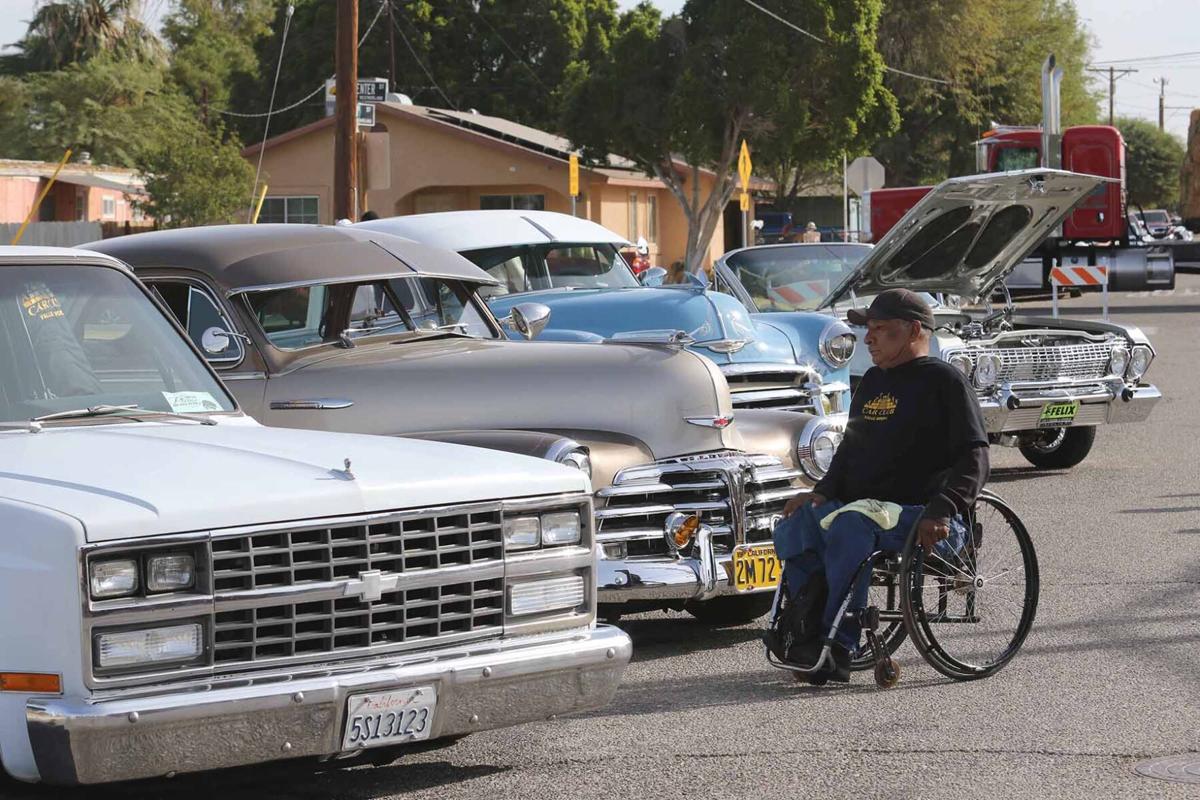 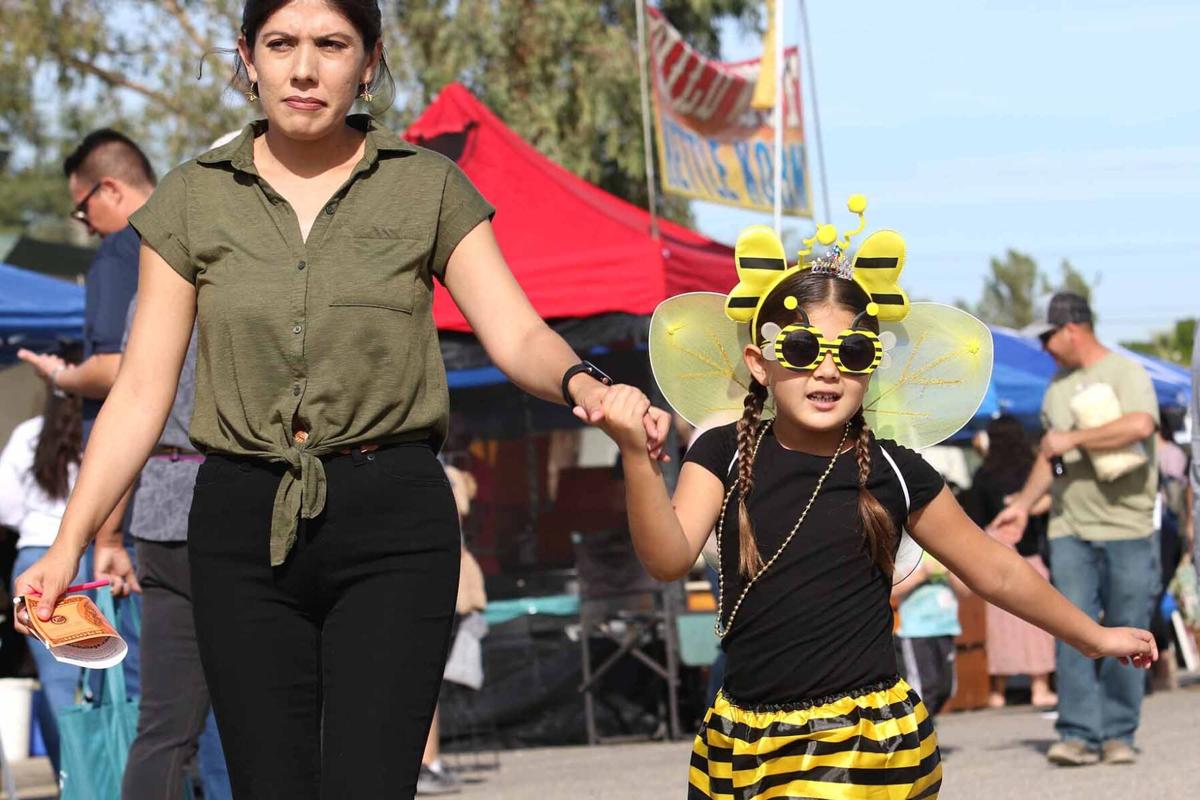 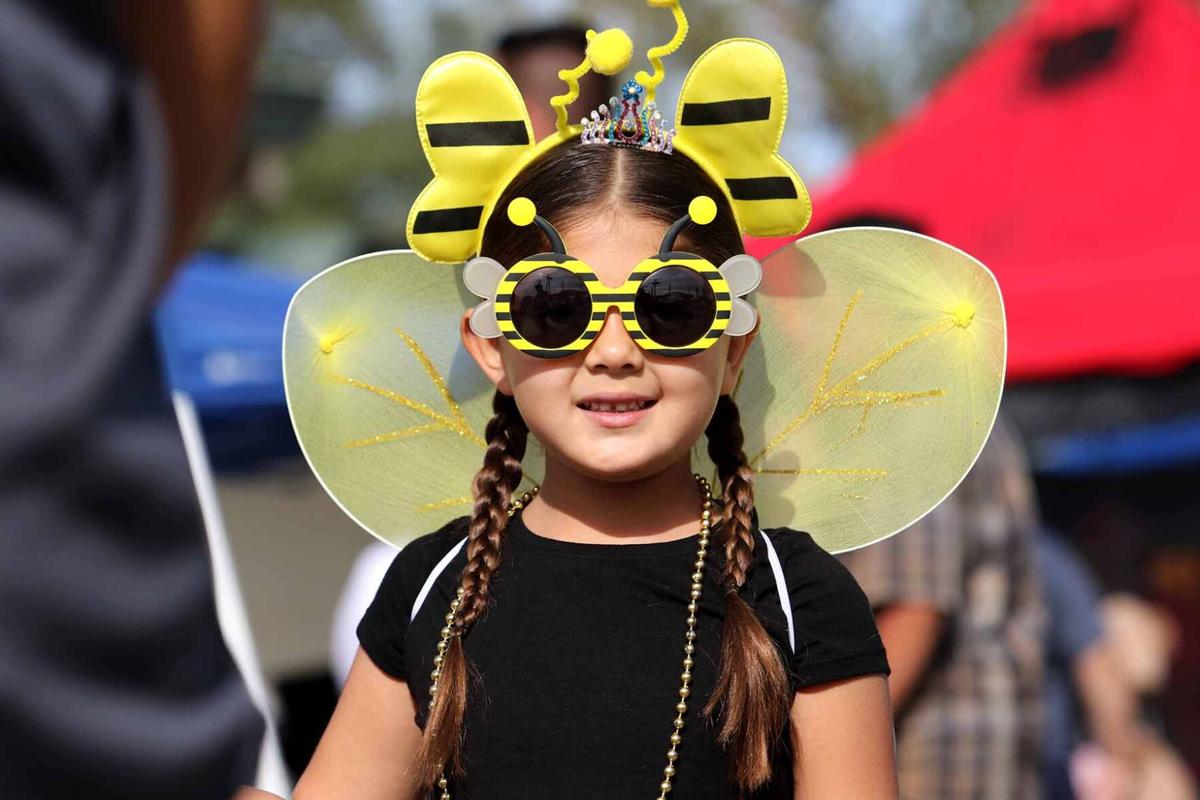 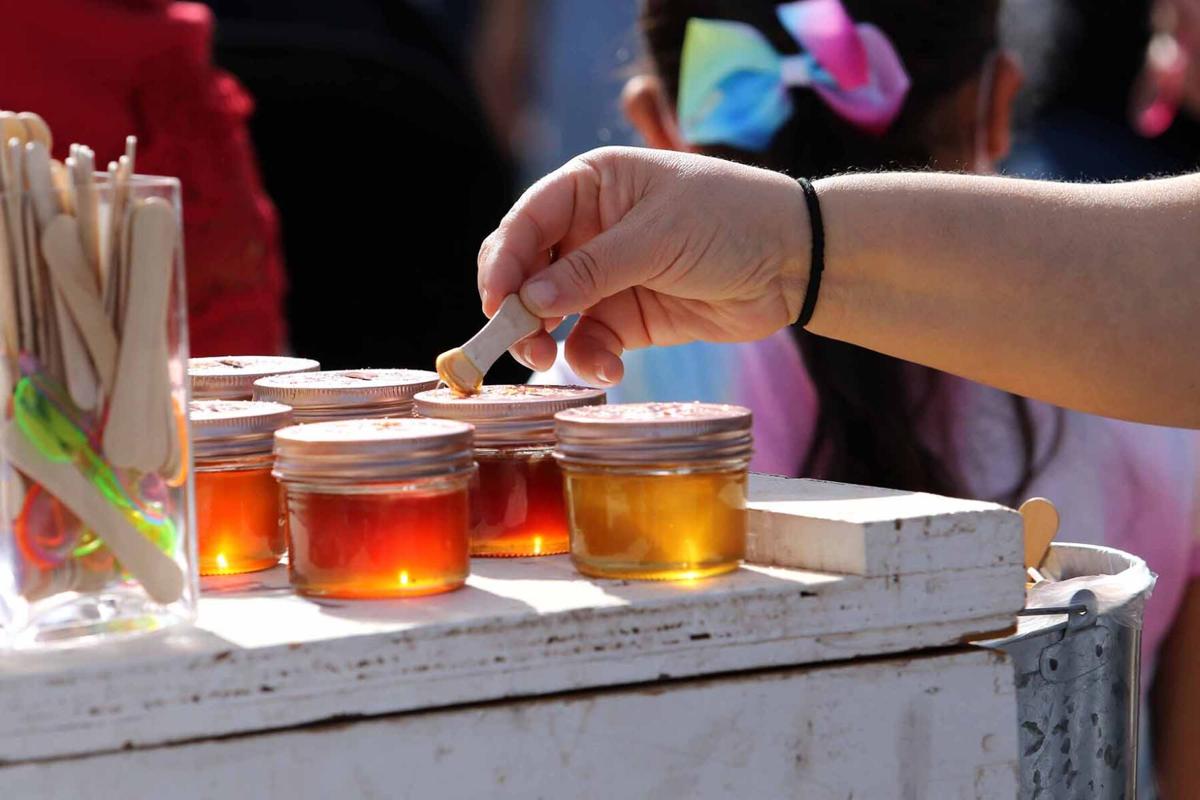 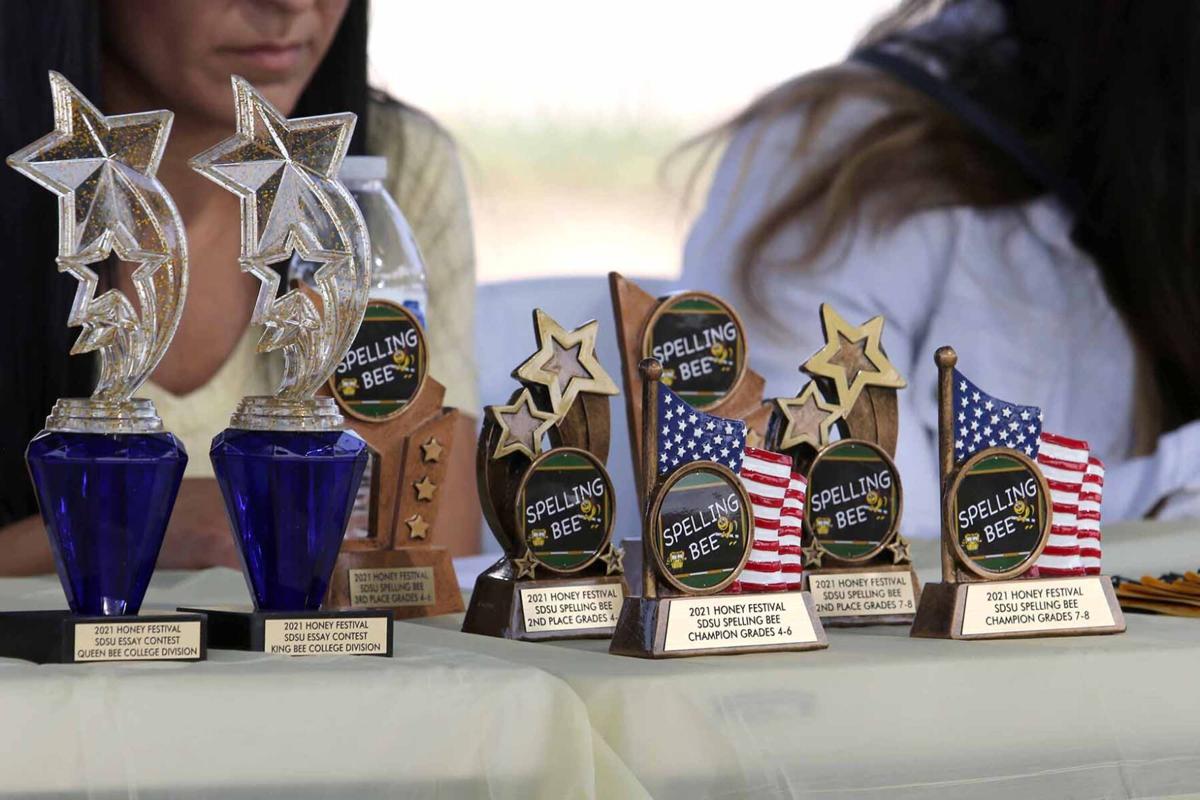 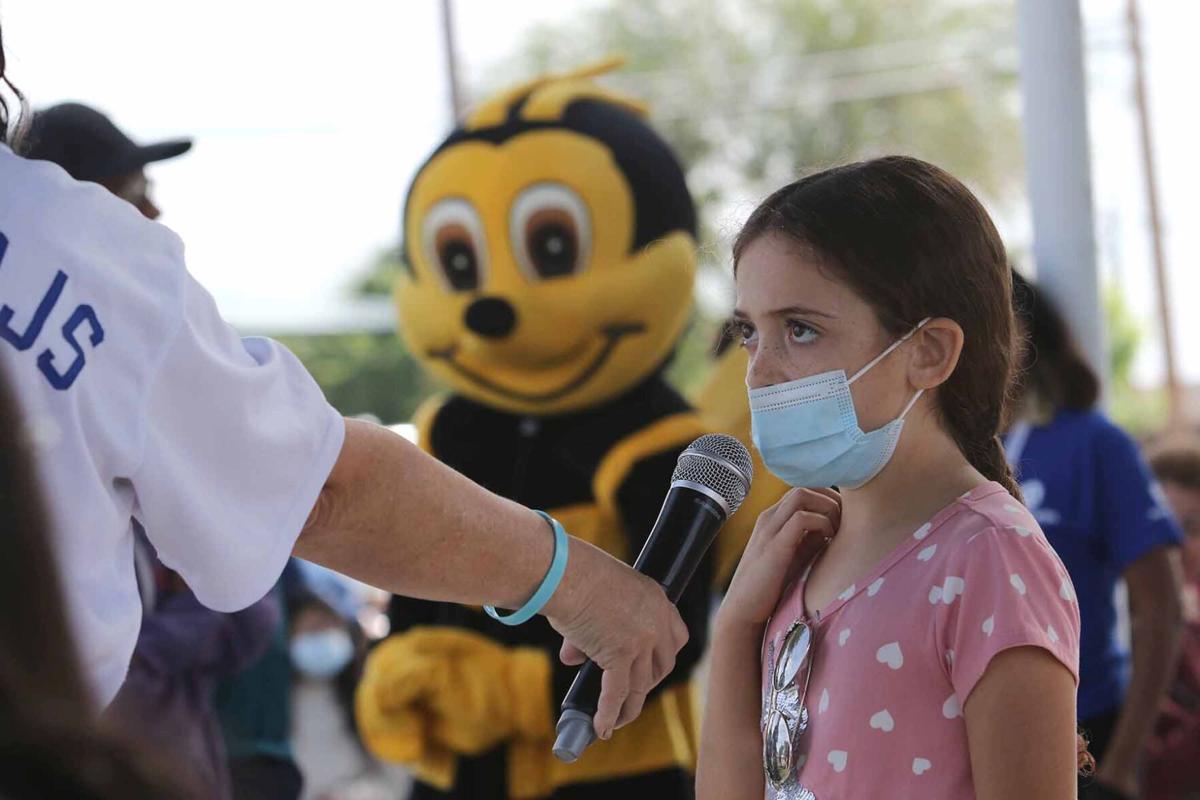 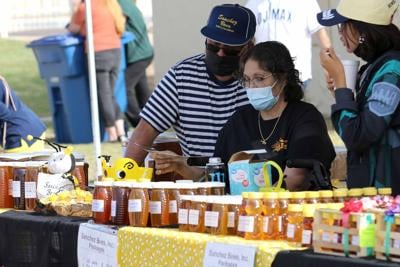 The honey festival — the major event of the city with a population of just over 2,000, according to the US Census Bureau for 2020 — attracted children, business owners, and festival goers. Some attended dressed in costumes associated with honey and honeybees.

“This is our first time that we are partnering with all chambers together,” said Julissa Ayala, Imperial Valley Regional Chamber of Commerce (IVRCC) membership director. “Families were happy and excited. They brought their chairs to the park and enjoyed the entertainment.”

Elena Chaidez went with her daughter, Kendra, 6. The mother-daughter duo held hands as they visited vendors along the blocked and cordoned F Street.

“I just put it together,” said her mother, Chaidez.

At the spelling bee, the audience cheered when Izabell Rivera, 10, spelled her winning word “N-I-F-T-Y” in the grade 4-6 category. Her parents were all smiles.

“I was excited. I’ve never won a trophy before, and I’ve never been in a spelling bee,” said the 4h grader from Westmorland Elementary School.

“They all tasted good, but my favorite is citrus honey,” said Lozano. Her second best was alfalfa honey followed by clover honey. “I use honey to mix with coffee, oatmeal, and to soothe a sore throat from coughing.”

Along 1st Street several shiny, vintage cars were on display.

“I gave it a second life,” said Vallarta, sitting in his wheelchair. “It was a challenge and motivation to rebuild this car.” Vallarta started rebuilding his 1985 Silverado Chevrolet in 2010.

“Honey is becoming a big business because it is seen as a healthy product,” said Sanchez, who has been in the apiary business since 1983. According to him, bee pollination was the main business but now, it is a 50-50 source of his income.

One of the gift packs had four kinds of honey — clover, alfalfa, wildflower, and citrus.

“They are all sweet, but our bestselling is citrus honey,” said Sanchez, who appreciated the people who came and purchased honey.