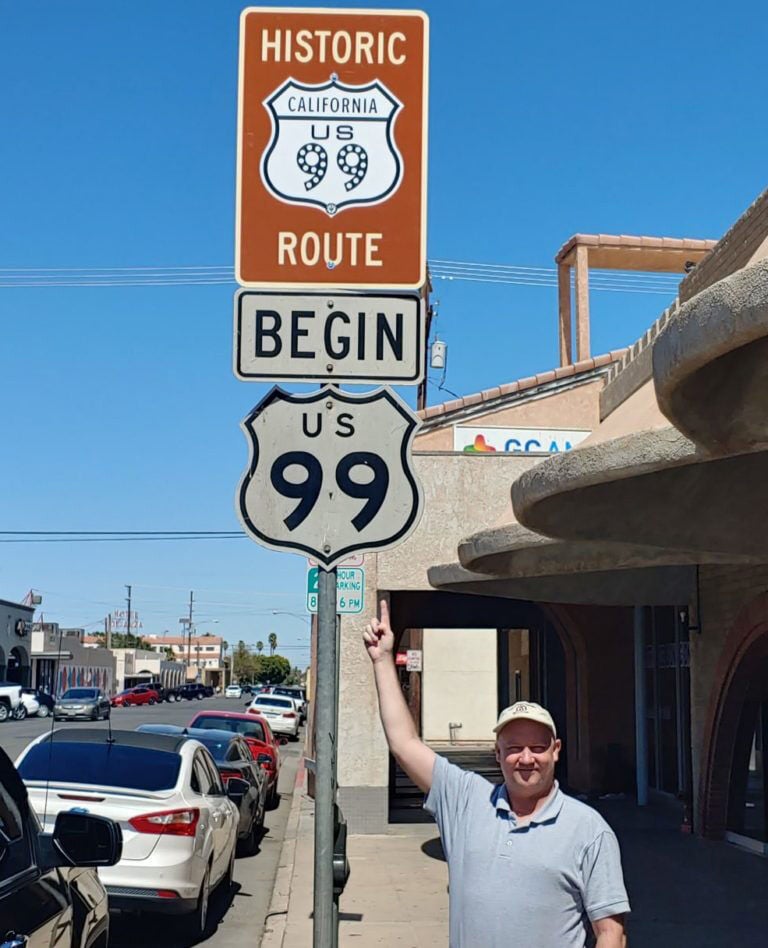 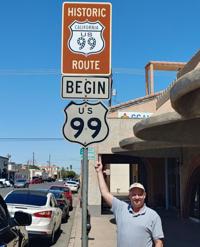 “The goal is to promote and preserve of what is left of US Highway 99,” said Michael Ballard, president of the newly created Historic Highway 99 Association of California, a nonprofit organization formed in December 2020.

According to Ballard, the signs were installed at two locations — 1st Street and Heffernan Ave., and 2nd Street and Imperial Ave. on March 24. The faded old signs had a gray background, but the new ones have brown backgrounds; and both have the words, Historic Route California U.S. 99.

“We want to help promote businesses in towns along the old US Highway 99,” said Ballard, who anticipates increased numbers of tourists visiting stores and restaurants, not only in Calexico, but along the historic route.

A media statement released by Calexico stated other goals — to protect and preserve historic structures such as bridges and buildings; support signage projects that would direct travelers to the historic road; and to support activities and events along US Highway 99.

Lilliana Falomir, public works manager, said her staff workers installed the signs upon receipt from the association on March 24.

In the same press release, City Manager Miguel Figueroa thanked “Mr. Ballard and the Historic Highway 99 Association of California for their generous donation, helping beautify our downtown with new signs.”

The City of Calexico, a southern California town along the international US-Mexico border, was the first city that the association approached to promote the historic route, said Ballard. Other cities along Highway 99, begin from the south in Calexico, then north — to include Heber, El Centro, Imperial, Brawley, Westmorland, and Salton City.

The historic highway begins in Calexico and traverses previously mentioned towns in Imperial County, and continues toward Los Angeles, Sacramento, and the northern border of California. Then it crosses into Oregon, Washington, and past the US-Canada border. A Google map search shows Highway 99 in Vancouver, British Columbia in Canada.

US 99 was a major thoroughfare for transporting agricultural produce — vegetables, livestock fodder, and cattle — from Imperial Valley to major cities in California and along the west coast states, said Ballard who studied geology and previously worked for CalTrans. A cyclist, Ballard has travelled sections along the historic route with his bicycle.

“Many businesses did close after the highway bypassed towns,” according to Ballard.

In 1993, the Assembly of the State of California declared the former US Highway 99 as a historic route in its entirety, according to Ballard.

The new concept of an interstate highway system was influenced, in part, by the increased ownership of automobiles, commercial freight trucks, and widening of roads. According to Ballard, the new system made navigation easier and gave travelers confidence and consistency in their journey. These interstate highways were called freeways.

Motorists access and exit freeways using ramps and can drive for many hours across states. They can change route directions using bridges or overpasses without stopping at any crossroads. The driver can therefore travel faster and reach destinations within a shorter period of time. Interstate 5 and Interstate 10 are examples of these freeways. Their names are commonly shortened to I-5 and I-10.

In the former route system, US Route 99 for example, there was cross traffic and vehicles merging into the route. There were traffic lights along the roads, and it took longer to reach a destination.

In the 45 years of service, US Route 99 has contributed to the history of cities it traversed, according to Ballard. And to recognize its contribution, the Historic Highway 99 Association of California resurfaced the old highway from obscurity, to hopefully, revive and promote economic development along the historic route through travel and tourism.