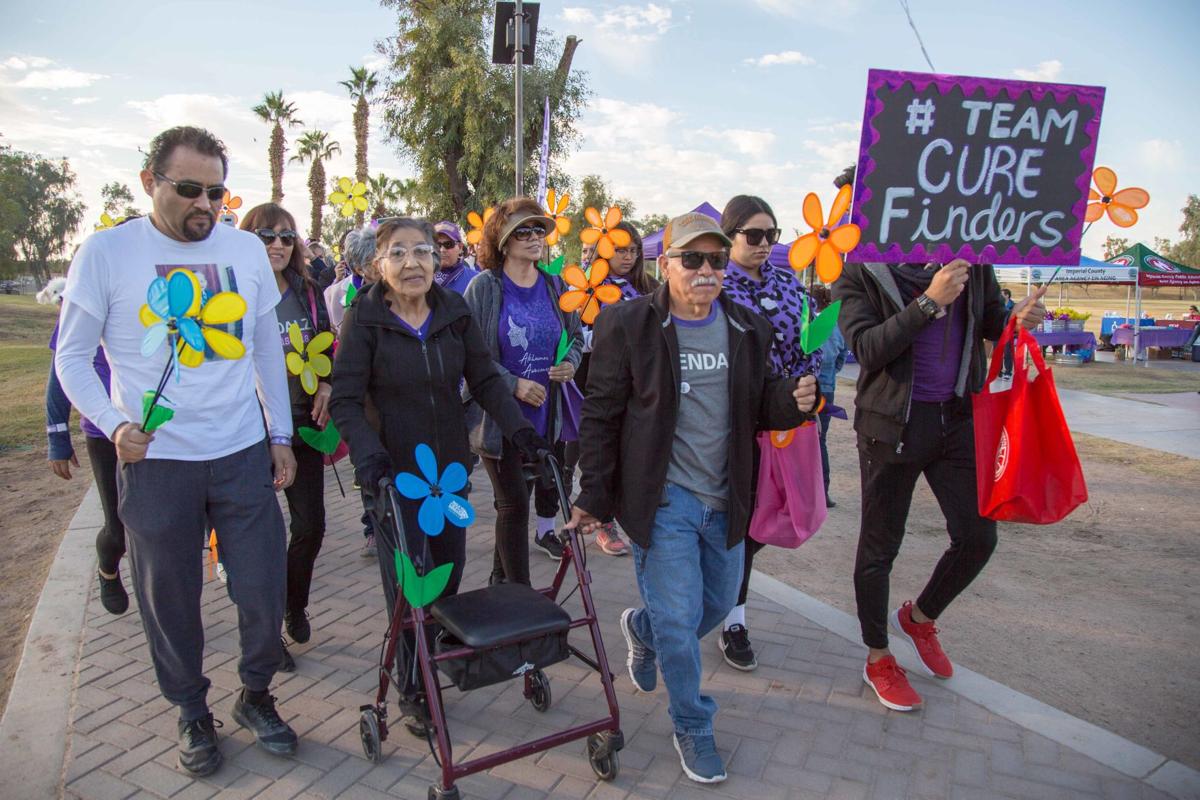 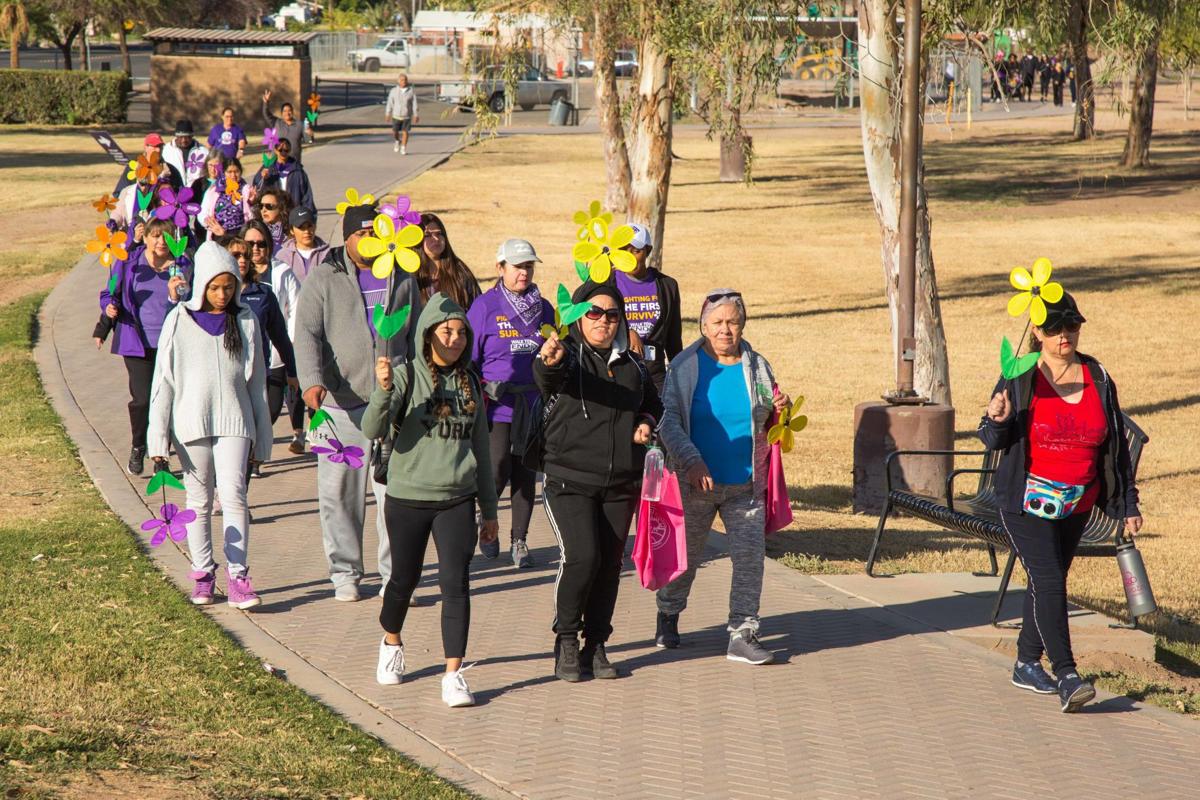 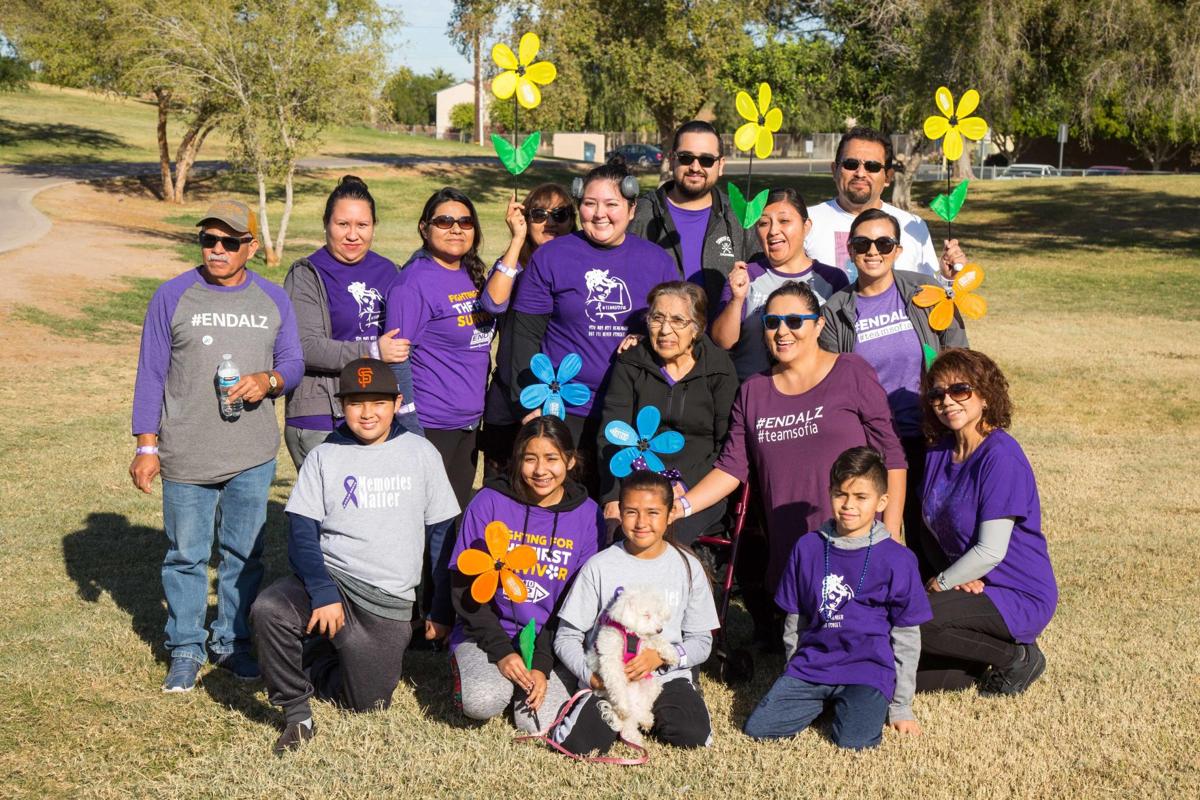 EL CENTRO — Families and caregivers of individuals affected by Alzheimer's disease participated in the “Walk to End Alzheimer’s” organized by the Alzheimer’s Association of San Diego/Imperial Chapter, at Bucklin Park Saturday, November 2.

Individuals dressed in light jackets and sweatshirts gathered information from several resource booths as a live band provided background music. Participants had the option of walking as an individual or as a team; the latter wore T-shirts with their team names.

Right before the start of the walk, supporters gathered behind a ribbon that served as the starting line. A few walkers carried photographs of their loved ones with the words “In living memory” but the majority carried color-coded pinwheel flowers.

An orange flower meant people who support the cause of Alzheimer's, yellow for caregivers, purple symbolized those who had lost loved ones, blue denoted those suffering from Alzheimer's, and white meant hope and cure. As participants walked along the path around Bucklin Park, the pinwheels spun in the breeze.

Douglas Friedman, director of communications at Alzheimer’s Association San Diego/Imperial Chapter, said the fundraising goal was $25,000. “We are committed to make our presence here.”

According to Friedman, support for the Imperial Valley includes education, support groups, community forums, and a 24/7 help line. Information on the percentage of raised funds allocated to Imperial or San Diego wasn’t available at press time.

The alz.org website claims 60,000 individuals are living with Alzheimer's in both San Diego and Imperial counties and are supported by about 160,000 caregivers. However, the website did not indicate the number of Alzheimer's cases specifically in Imperial County.

Alzheimers, a form of dementia, is a disease that affects the brain and causes memory loss, according to Friedman. A person may live for many years before symptoms begin to show. “This is a disease of the aging.”

Symptoms include forgetfulness of a multitude of things such as names, memories, recipes and routines of daily life. As such, it involves finances and time caring for loved ones.

Jazmin Arellano and family members brought their grandmother, Sofia Vargas, 79, to the event, Walk to End Alzheimer’s. Vargas’ grandchildren, great grandchildren and six of her 13 children came with their tee-shirts printed with “#teamsofia”—a heart replaced the letter “o” in Sofia.

At the conclusion of their walk, “#teamsofia” laid a blanket on the east hillside at Bucklin Park. They sat on folding chairs and on the grass. Bags of snacks, breakfast items, and drinks were laid on the blanket. Vargas sat in her dual-function transport wheelchair surrounded by family members as grandchildren ran and played.

With family supporting her, Vargas was able to walk two laps around the park with her walker. There were cheers and encouragement even from non-family members.

“We noticed the symptoms about six years ago,” said Arellano, who is one of several family caregivers of Vargas. According to Arellano, her grandmother, whom they address as “Nana” was the family cook and knew the ingredients of her recipes by heart.

“We started noticing she wasn’t putting the right ingredients in her recipes.” My grandmother  added “Tajin” to the barbacoa.

Tajin is a popular spicy seasoning powder specifically for fresh fruits and vegetables; and is not an ingredient for Barbacoa—a recipe prepared from beef.

Her grandmother also heated a tamale for ten minutes which caused smoke to come out of the microwave. Tamale is a traditional Mexican dish made from “masa” or corn dough. The masa is wrapped with corn husks and steamed.

And in some kind of a reversal of roles, Vargas began to call one of her daughters living with her, “Mom”. The family has gotten used to it, according to Arellano, who became teary eyed recalling the difficulties of caring for a family member suffering from Alzheimers.

“It’s hard seeing your mother forget her own children. Its hard to see her going through that. It is sad. She grew up independent, but now, she depends on everybody around her,” said Rocio Almeraz, one of the daughters and a caregiver of Sofia Vargas.

When the reporter from The Desert Review interviewed Vargas, she responded in Spanish and she diverted to another topic and became emotional. According to Almeraz, her mother often talks on the same topic repeatedly and later laments of pains in her knees and neck.

“Health wise, Sofia is doing great. But mentally, not too good because she has dementia and Alzheimers,” said Almeraz. Family members have a routine schedule caring for for Sofia.

According to Almeraz, “We’re here supporting and hoping for a cure.”