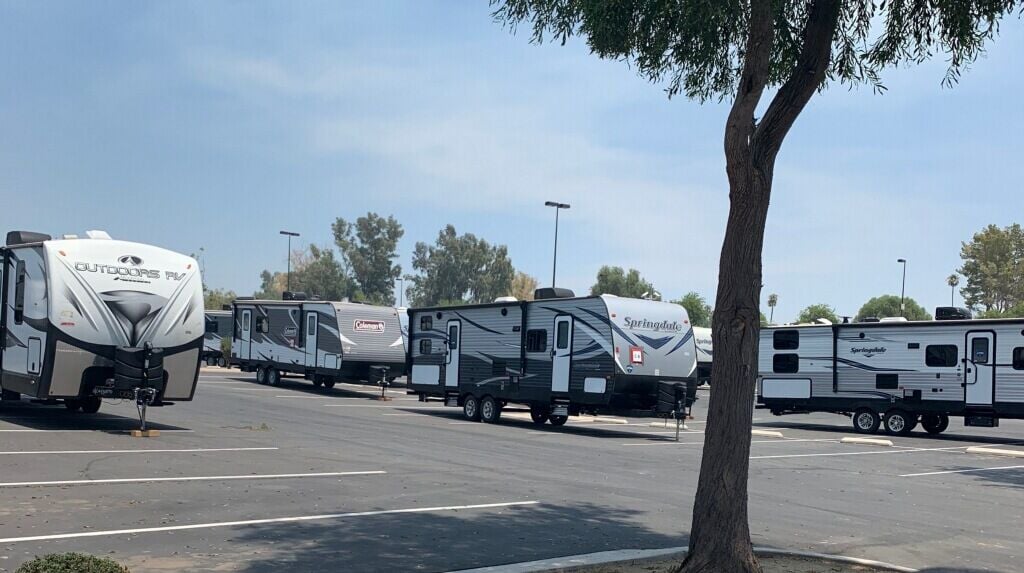 The travel trailers for temporary housing for the displaced Niland fire families sit in a lot at Imperial Valley College. The trailers arrived in full Friday, July 24.

The travel trailers to be used as temporary housing for the displaced Niland fire families sit in a lot at Imperial Valley College. The trailers arrived in full Friday, July 24.

The travel trailers for temporary housing for the displaced Niland fire families sit in a lot at Imperial Valley College. The trailers arrived in full Friday, July 24.

The travel trailers to be used as temporary housing for the displaced Niland fire families sit in a lot at Imperial Valley College. The trailers arrived in full Friday, July 24.

NILAND — Imperial County will be hosting a Niland Fire Recovery Town Hall Meeting at Calipatria High School’s Wirt Auditorium for the families who were affected by the Niland fire, July 27, at 5:30 p.m.

This comes as an effort from the County to further aid the families and provide information regarding the cleanup process, the acquiring of temporary travel trailer housing, and resources still available to them, per County officials.

Imperial County Deputy CEO Esperanza Colio said the County has submitted proposals to the State of California to try to acquire 43 travel trailers for temporary housing for the families displaced by the Niland fire. The trailers, however, will only be on loan to the families, as the trailers will technically still be state property.

“They are helping us by lending us those travel trailers so that we can work with the families to prevent them from being homeless, especially during a pandemic,” she said. “That's the end goal: That we prevent the spread even in emergencies, and so that will facilitate the process because the families are tired of being in hotels.”

Colio said the temporary trailers — which arrived in full Friday, July 24 — will serve as an upgrade to families from the hotel rooms, to trailers, which will have two bedrooms, two beds, their own shower, a kitchen, a living room, and a small space to sit outside.

“That will be helpful for a little while. It's not intended to be permanent housing,” Colio said.

Colio said finding spaces for the trailers for the temporary housing has been difficult, as the spaces offered by the Niland Chamber of Commerce is currently lacking the infrastructure needed for family living, such as utility lines for power, water, and sewer.

Because this could cost the County funds to install from scratch and would create further delay, the County has been asking the displaced Niland families if they would be willing to relocate temporarily to mobile parks in surrounding communities, which already have the pre-existing utilities infrastructure they need.

While Colio said the County started cleanup of the burned sites July 17, she also said “it might take two or three months to clean up the properties; we don’t know.”

The cleanup process is being done through the County because of the possibility of asbestos and other hazardous household materials being present where the homes used to stand in Niland.

Another issue with temporary housing, Colio said, is the trailers are too narrow to be wheelchair accessible. Arrangements will have to be made for displaced families who may have family members needing wheelchair access.

"So, this whole thing is going to last months," Colio said.

Colio said the County has submitted a grant for more long-term mobile homes for the displaced families to eventually take the place of the temporary travel trailers, but she, her staff, and those she is reaching out to for help are currently working hard to find funding for a more long-term solution.

“(The travel trailers) might not be the same building like the house you used to have,” Colio said, “but a mobile home is something. At least you're not going to be homeless.”

Colio said the County estimated a $3.6 million-dollar total loss in damages in the Niland fire. This includes property damages ranging from $41,000 to $144,000, not including damage to infrastructures at the former home sites.

The $3.6 million figure includes an average of about $50,000 in personal property losses, Colio said, as some families also lost their cars in addition to their home furniture, electronics, and personal medical equipment.

Maria Nava-Froelich, director-coordinator for the Calipatria-Niland Family Resource Center (CNFRC), said while her agency is working with the County on behalf of the Calipatria Unified School District, the County is taking the lead in providing temporary housing for the families.

“In the pipeline right now, we have four families that are going to be put into apartments or a rental house and (the County is) helping them,” Nava-Froelich said. “There's a lot of services taking place because they're still needing a lot of services.”

While monetary donations are still currently being accepted on behalf of the school district’s fund for the families, the donation window for the Niland Fire Fund closes July 31, she said.

Nava-Froelich said the CNFRC is in the process of selecting a Niland Fire Fund Committee, which will meet after confirming membership in order to collectively decide on the best use of the funds to aid the families.

The Niland Fire Fund Committee will consist of County and IID officials, a local attorney, and Imperial County Supervisor Ryan Kelley, in addition to at least one Niland community member, according to Nava-Froelich and Calipatria Superintendent Douglas Kline.

“We try to focus on whatever their needs are at the time because right now they are looking for long-term housing,” said American Legion Post 60 Executive Board Member Raymond Gonzalez.

Gonzalez started a GoFundMe account to help the Niland families. He said Brawley’s American Legion has been cautious regarding where donations for the families go, including the personal items and small cash donations they have personally handed out to the community.

“I can only control what we do,” Gonzalez said. “For us, the monetary donations will go toward whatever the families need through these donations.”

Alba Torres, donations coordinator for the Niland-based non-profit Forgotten Angels, said they have also been exercising the same type of caution regarding how donations are handled, stating after initial personal item needs for the families were met, she thought it best to switch from using her personal business account to accept funds to the Angels’ 501(c)(3) account.

“We gathered everybody's name that donated and I said, ‘Here are the amounts that everybody donated to us,’ and we used it right away to buy those (Walmart) gift cards for when people showed up at (my aunt’s) house,” Torres said.

Torres said her one-person company, Alba Cake Studio, donated about $1,000 worth of gift cards and purchased underclothes for the families of Niland that would come to Forgotten Angels for help, saying that the Niland community already trusts their founder, her aunt Maria Lopez, as Lopez is a bus driver for the school district who many of the families already know personally.

It was a similar story for other non-profits working directly with the families.

“I closed off my donations for money when I reached $9,000 and that was amazing,” said Calipatria Police Athletic League Volunteer Jackie Estrada.

Estrada said she purchased items for the families per their requests, including mattresses, bunk beds, laptop computers for students, air conditioning units, and fixing a/c units.

“At that point we had all this money and it became more than just their needs, it also became the wants,” Estrada said.

While Estrada said she doesn’t believe the families need much more monetary donations as many families have started their own GoFundMe accounts individually, Nava-Froelich said people can still donate monetarily and larger home furnishing items the families are looking for to help curtail future costs of long-term housing.

“The families right now are wanting furniture, microwave ovens, and kitchen and cookware, stuff like that,” Nava-Froelich said.

“We purposely got some professionals … just so they could make some good decisions on how those funds are going to be dispersed,” Kline said. “The Committee will find out how to distribute all those funds; we just collect them, deposit them and we have them earmarked in the Niland Fire Fund through the school district.”

Kline said the school district was chosen to hold the fire relief funds specifically because they could put the money in an annually audited account in order to be transparent.

Kline also said while the CNFRC is under the umbrella of the school district, it was decided the Resource Center will not be on the Niland Fire Fund Committee and will be “a vehicle for information” only being present to answer specific questions about the CNFRC.

“So we're not going to distribute the money; we won't do it,” Kline said, “The Committee is going to have to do it, and the earliest I heard the committee would be able to meet would be August 10, and until then those funds will stay right where they are.”

“My recommendation to the Committee was that when they decide how they distribute the money to please post it and be completely transparent; that's all I ask,” Kline said.

Raymond Gonzalez of Brawley’s American Legion is also still accepting monetary donations for the Niland fire victims through his online GoFundMe account until at least July 31. That GoFundMe drive can be found at gofundme.com/f/niland-fire-relief.