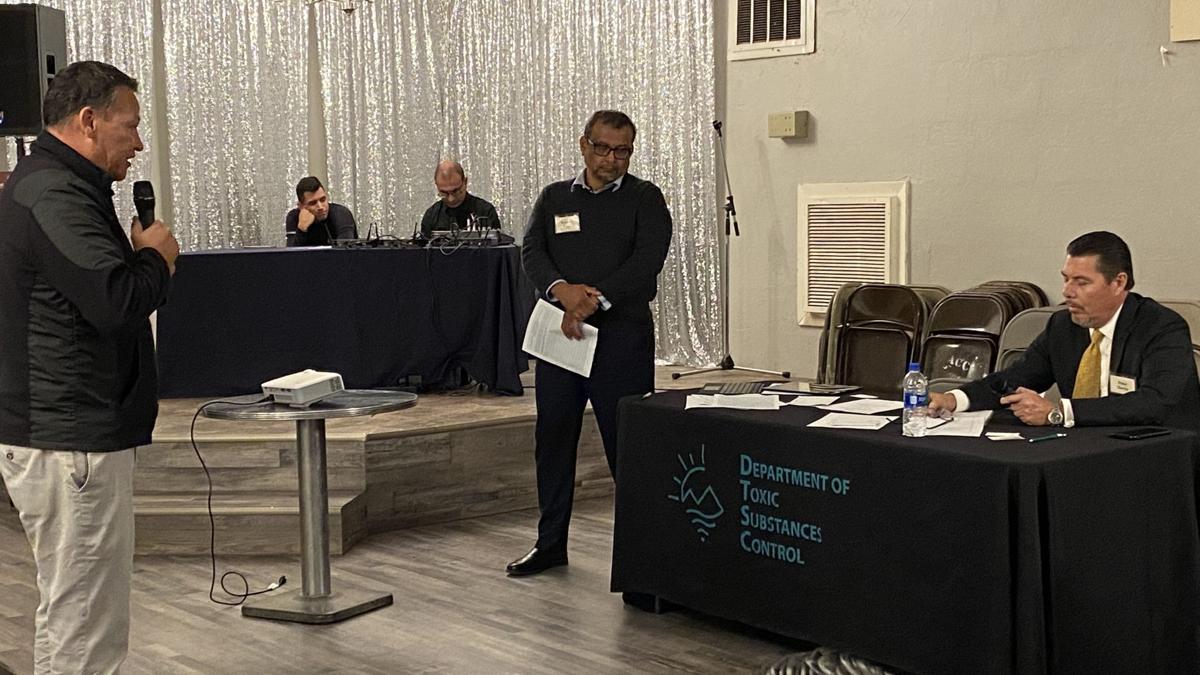 Comite Civico Executive Director Luis Olmedo voices his concerns about the neighborhood adjacent to the PureGro site to the Department of Toxic Substances Control at the community meeting Thursday, December 5, in Brawley. 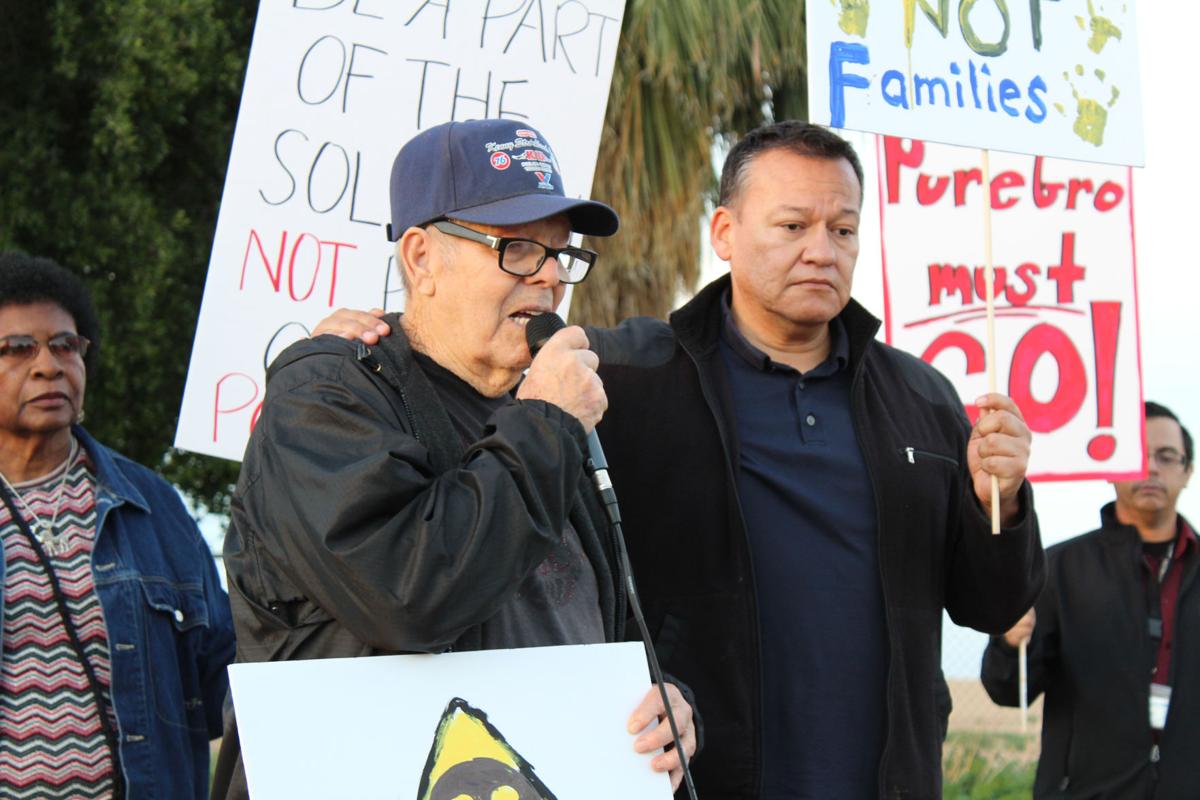 A resident of the neighborhood adjacent to the former PureGro site gives testimony at the protest Thursday, December 5. 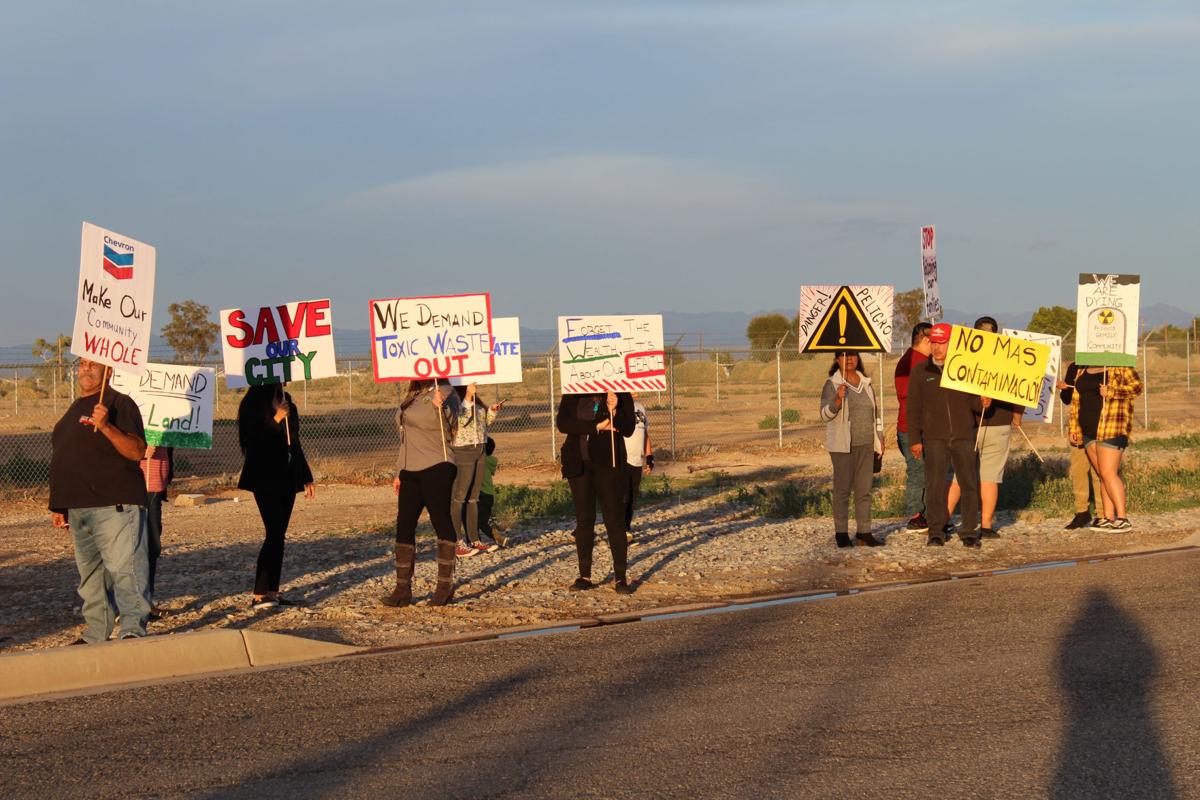 Brawley residents meet at the PureGro site hours before the meeting Thursday, December 5, to protest the inaction of the California Department of Toxic Substances Control in cleaning up the area and not testing the residential neighborhood for toxins adjacent to it.

BRAWLEY — The Department of Toxic Substance Control (DTSC) presented the long-awaited plan to clear out the contaminated soil stockpile on the old PureGro site in Brawley at the community meeting Wednesday, December 4, but the community is not pleased with the solution.

The PureGro site was used to formulate, store, and distribute pesticides and fertilizers from 1940 to 2000. It was located on a 11.66-acre lot on the east side of Brawley on the corner of River Dr. and North Palm Ave. In the early 2000s, the facility was shut down and contaminated materials were disposed of, but the foundations of three buildings remain today. In 2006, DTSC put in an off-site removal action plan to remove the soil from the area.

DTSC’s current plan is to remove the stockpile of contaminated soil at the PureGro site completely and will be closed off with a new fence. The stockpile will be transported to a dump location in Arizona. Designated hotspots of contamination identified by DTSC will be excavated approximately four to five feet deep for offsite transport. The site will be covered and monitored long term for contamination in the soil and groundwater wells.

A 50-foot buffer zone between the fence and the street will be cleaned up to residential standards. It will include new plants and a sidewalk for people to walk safely.

The cleanup is scheduled to begin in early 2020 and be completed in winter 2020.

Peter Garcia, site mitigation manager for DTSC, stated testing was done around the site and no contamination was found beyond the immediate area.

The new proposal comes a year after DTSC’s original plan was proposed to the community, which involved spreading the stockpile dirt over the entire site and capping it with gravel or cement with some monitoring. The Brawley community rejected the idea, demanding the stockpile be completely removed due to the public health hazard they claimed it posed.

The community was okay with the current proposal to remove the stockpile, but said it was not a truly perfect clean-up plan. The community demanded DTSC does more than clean the site up to industrial use cleanliness levels, saying they want the site cleaned to residential use standards.

Peter Garcia stated DTSC tested the area outside the fence and determined there was nothing harmful in the soil. He added DTSC is not an agency charged with looking at health issues in the community. Public health falls to the county Department of Health, according to Garcia.

“We are here just to do the nitty-gritty to keep the property safe,” said Garcia. “But we realize there are other concerns in respect to health issues and we are trying to bring the community together with those agencies.”

Olmedo stated DTSC refuses to test the community because they are afraid of what they will find. They also said it would be too costly.

Emotions ran high as the community voiced these demands to the DTSC and Garcia at the meeting. Many said it was not possible the contamination remained within the fenced off site. Others mentioned the horrible stench that came from the facility when they were growing up in the neighborhood.

Imperial Valley College President Dr. Martha Garcia grew up on N. Adams St. and demanded for DTSC to do more than just clear out the stockpile.

“My father continues to live on that street and my mother died from cancer two years ago, and I will never know if those toxic fumes had an implication to it,” said Dr. Garcia. “I, therefore, as a former resident of that street, demand that there be a residential cleanup, a new assessment, and cleanup of the groundwater.”

Brawley community members protested for hours before the meeting regarding the inaction at the PureGro site, citing the lack of communication and effort by DTSC and Chevron to get the site cleaned up.

The public opinion window is open until December 17. DTSC will continue taking questions and comments through mail, email, or phone call.

Information on the project can be found on DTSC’s website at https://www.envirostor.dtsc.ca.gov/public/profile_report?global_id=13070097