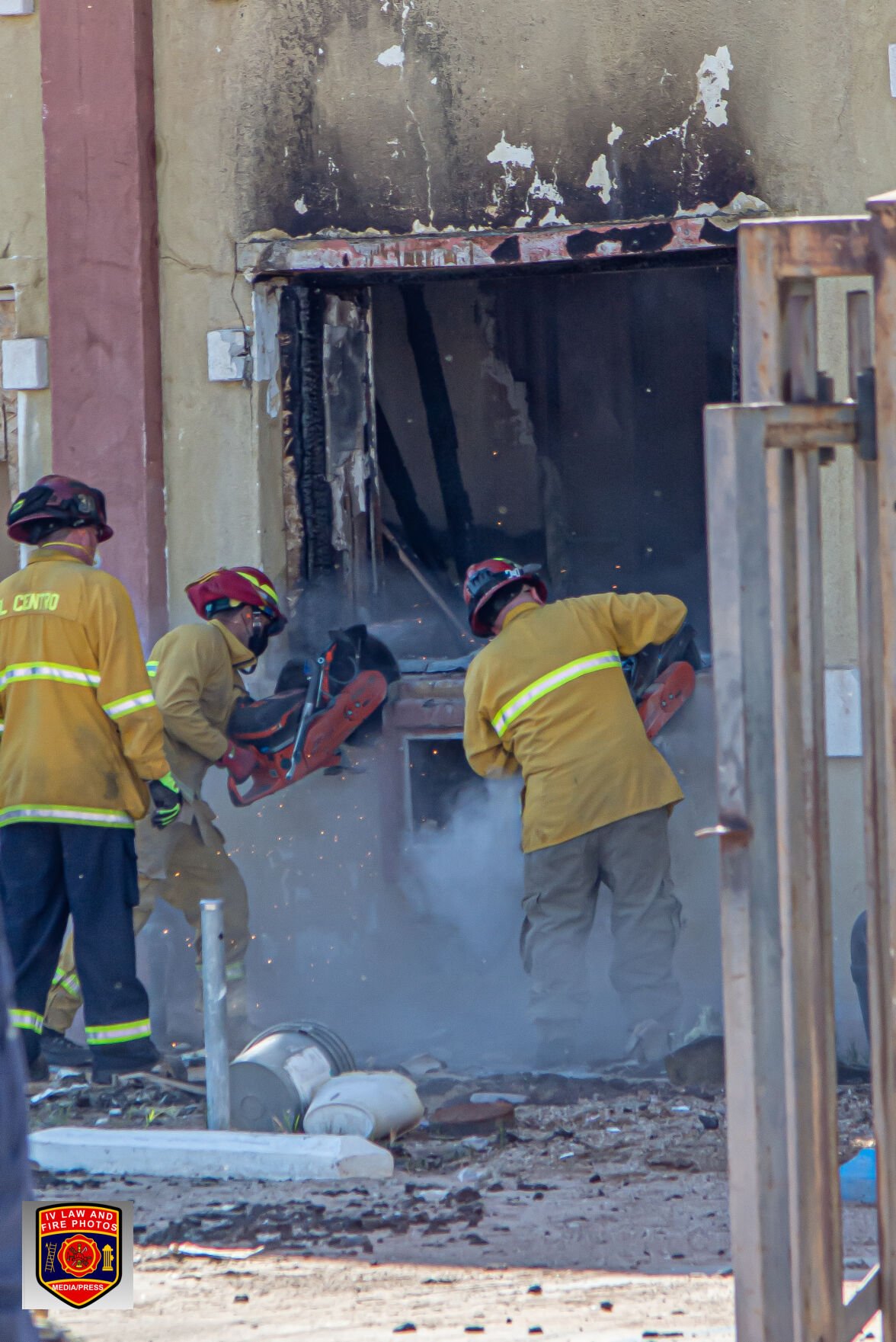 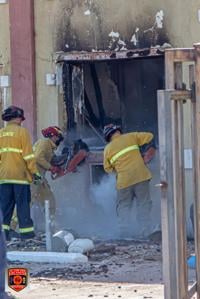 El Centro firefighters cut into the side of the burnt Mayan Hotel structure, February 17, in El Centro. 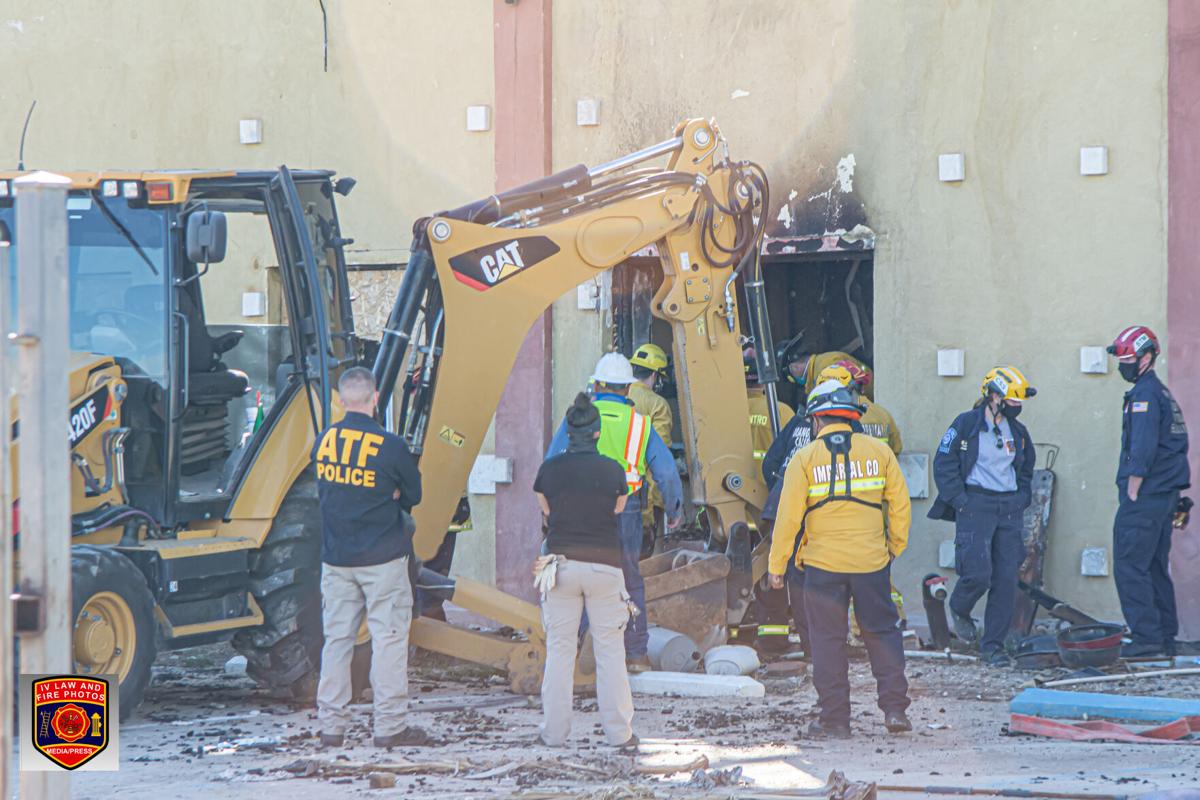 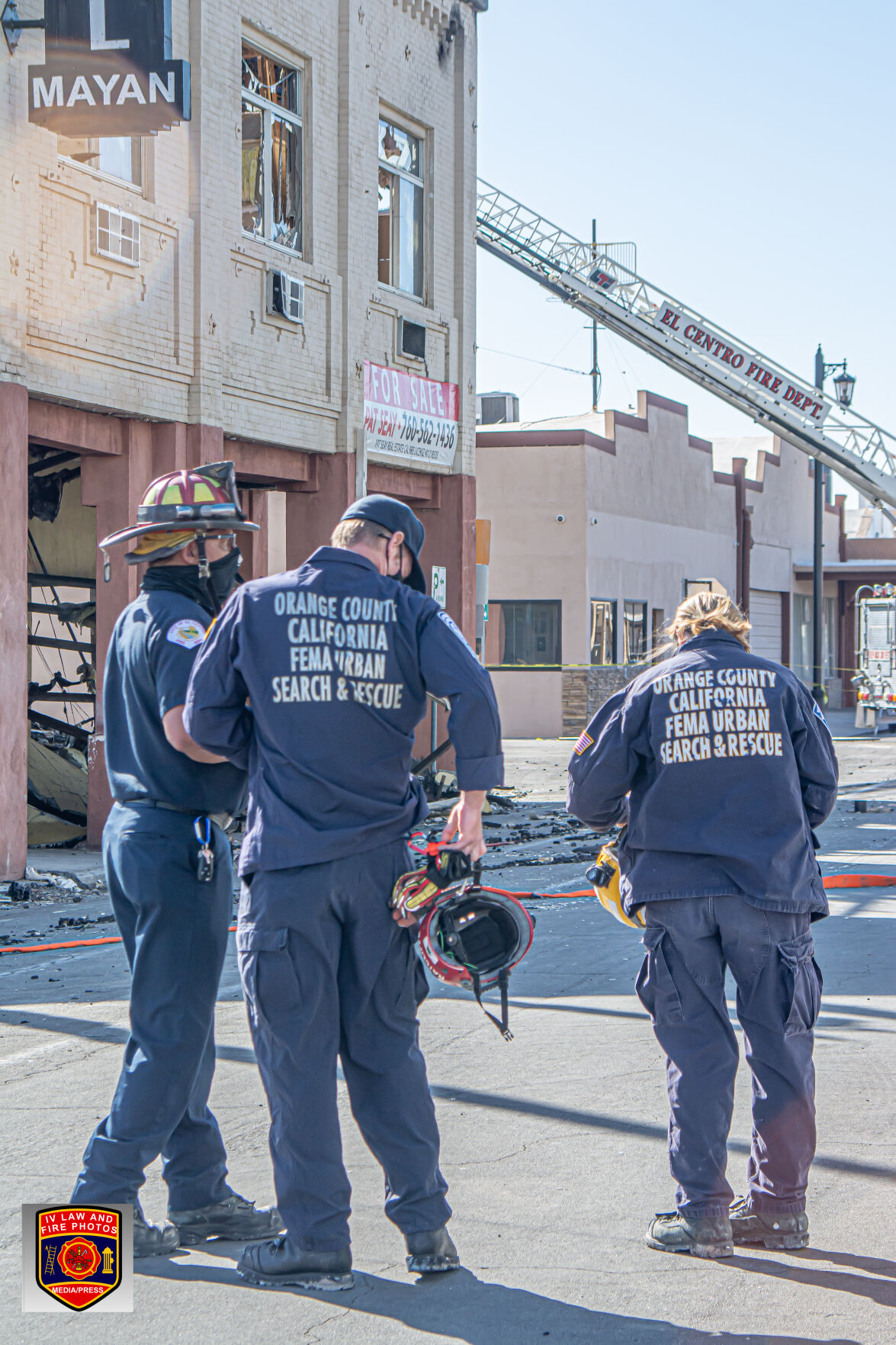 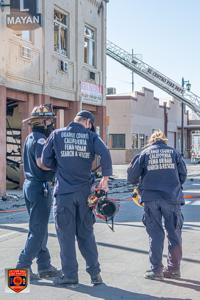 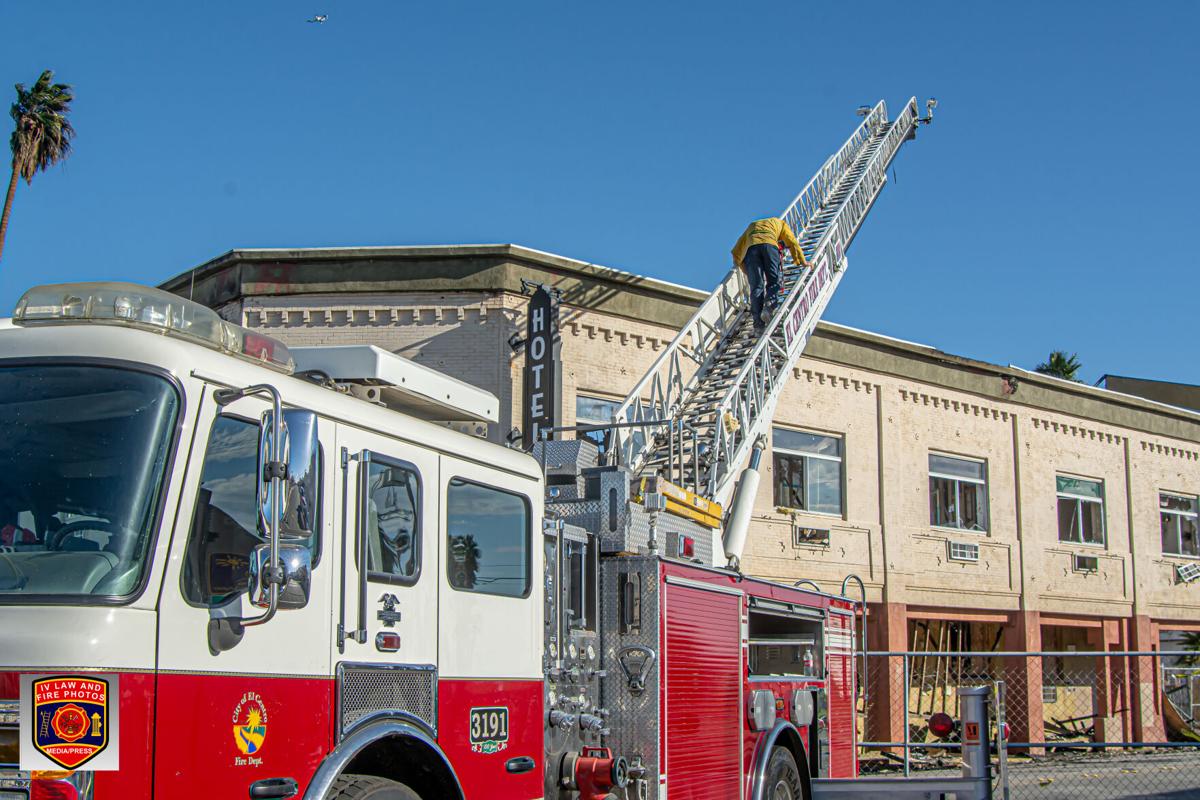 An El Centro firefighter climbs a ladder on a fire engine to get a top view of the charred Mayan Hotel structure, February 17, in El Centro. 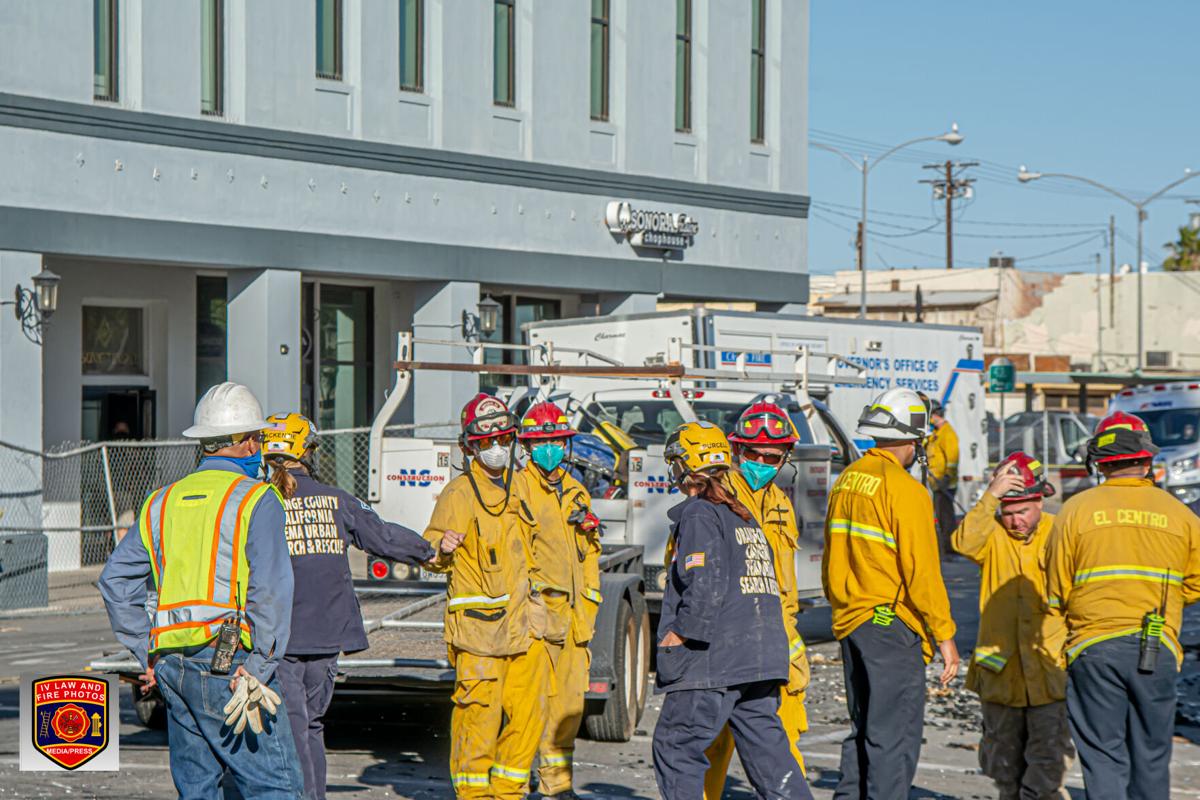 El Centro firefighters cut into the side of the burnt Mayan Hotel structure, February 17, in El Centro.

An El Centro firefighter climbs a ladder on a fire engine to get a top view of the charred Mayan Hotel structure, February 17, in El Centro.

EL CENTRO — After nine agencies convened over the charred remains of what was once the Mayan Hotel on the corner of 6th and State Streets in El Centro last week, confirming no human casualties, the building remains a public safety hazard which needs to be rectified, according to El Centro City officials.

El Centro Mayor Cheryl Viegas-Walker and City Attorney Elizabeth Martin said Wednesday, February 17, the City would file in El Centro Superior Court against the owner for receivership of the Mayan Hotel property by February 19, in an attempt to begin demolition, clean up, and abatement on the property.

This comes on the heels of the City erecting a safety wall around the building last week, it being declared unsafe and unsalvageable by fire crews and the City engineer last week after City assessments, Viegas-Walker said.

“This doesn't happen without the owner being invited to be involved … it's not like you're taking away their property and not telling them,” Martin said. “There's a very strict noticing procedure. You have to get a title report on the property — a 'litigation guarantee' — so you can send notices to every person who might be on title saying, 'This is what we're going to do.'”

Martin said the City had been planning on filing for a receivership since before the Valentine's Eve fire, as the Mayan Hotel was also set ablaze in a two-alarm fire on December 15, 2020, "but I don't think anyone anticipated how big this one would be."

“This is not intended to be confidential ... we've announced in public that we're planning to do it because the people needed to know the City is doing something about it,” Martin said.

Since the Mayan has been deemed a public safety hazard, Viegas-Walker said the City is filing the lawsuit as “ex parte,” meaning the legal action can be filed without notifying the owner due to the emergency nature of the situation.

If the court rules in favor of the receivership, the third-party receiver would take control of the property and begin the demolition and clean-up process, working with the owner as much as they are willing to work with them to find a resolution regarding the property, said Richardson “Red” Griswold, a receiver with Griswold Law in San Diego, who has handled receiverships in El Centro and Brawley in the past.

“The goal is to rehabilitate the property and make it safe again,” he said. “That could mean a number of things: Hiring a contractor, authorizing fencing, boarding up, and securing the property. In a sense the receiver does their own investigations, inspections, gets bids, and comes back to the court and provides the judge with options … and ultimately the judge will decide what direction it'll take and give the receiver orders on the next steps.”

"When you have an event like this type of fire and unstable structural walls and ceilings that could potentially collapse even further, and you don't have a party that has taken reasonable steps for property security, that is a very unsafe condition for even a firefighter to go onto the premises, let alone a member of the public," he said.

"The burden is on the City why it is so urgent that the property be put in the hands of a third-party receiver because of the current conditions," he said.

Griswold said even if the court grants the receivership, the owner — Jack Rafiq of Escondido-based J’s Property Management who has had at least handful of legal cases pop up against him since 2010 with most being dismissed, according to Trellis.law — would still retain legal ownership of the property even as the receiver worked through the process.

He said though it is likely “receivership certificate lien” would be placed against the property to acquire the funds for all the work — including reimbursing the City and fire department fees — ultimately it is the owner who would make the final decision regarding what they want to do with their property.

While Griswold said the receiver carries out the control of the property for the courts throughout the process, he also said “once I am appointed, I am still welcoming of owner involvement and cooperation.”

If the receivership is approved, Viegas-Walker said she believes the entire demolition and clean-up process could be done within 60 days of the court ruling.

“Well, we don't want to get too far ahead of ourselves, however ... every option is on the table,” she said.

“I think the City is always looking for opportunities to enhance downtown, and with the beautiful new entertainment center going in right across the street, that's a prime location for us to look for some type of redevelopment in that area,” she said. “If we were to even potentially acquire the property and look to add it to the (old library) property that we already own, that would be a significant parcel available for some type of development.”

“The owner still owns the property but needs to decide what they're going to do moving forward,” she said.