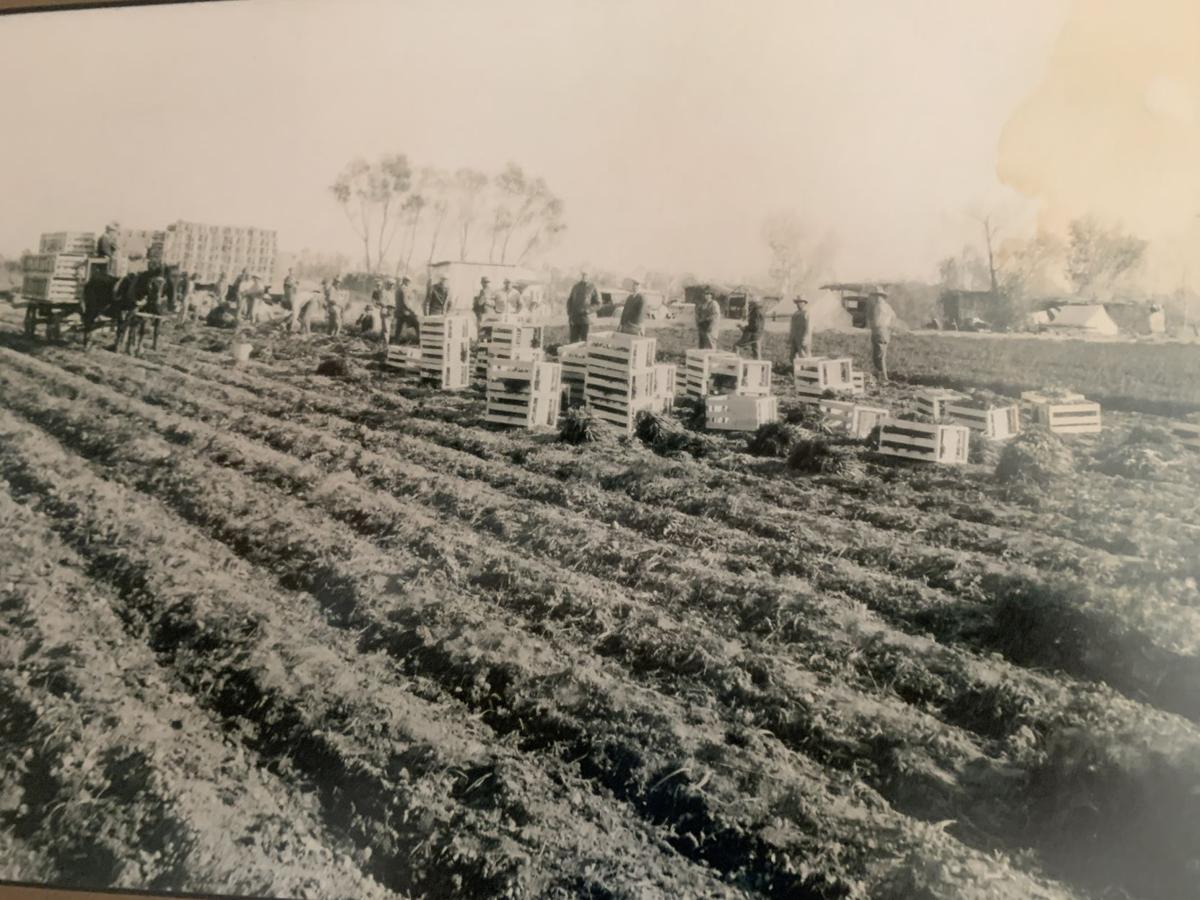 An early twentieth century field of cantaloupes being harvested in Brawley.

An early melon label for wooden crates to be shipped to the east coast.

Growing up, I was lucky to have a father who worked in Imperial Valley’s diversified produce business. This meant that my family was constantly supplied with boxes of fresh, local produce when he came home. I always loved hearing his stories of how and where a particular crop was grown, where the produce was being sold, and any challenges they might have faced that season. It was especially fun when we’d spend a day driving around to see different fields throughout their stages, from field preparation, to planting, to harvesting.

While I grew up loving to eat anything and everything my dad brought home, the summer months were especially exciting to me because I knew it was melon season. Every week, he would bring home watermelon, honeydew, and my favorite, cantaloupe! It wouldn’t take long for my three sisters and me to eat it all. In all honesty, it was pretty normal for me to eat about a quarter of the melon, just while my dad was cutting it up.

Even though I grew up loving cantaloupe and learning all about current practices from my dad, I had no idea about this delicious, orange-fleshed fruit’s long and interesting history here in the Imperial Valley. Recently, I have found a lot of joy in reading up on the history of Imperial Valley and the early years of our Valley’s agricultural foundation. Within the many stories of our early years, I was highly intrigued when I started learning about the origination of my favorite summer fruit here.

Once I stumbled upon an article that mentioned cantaloupe’s early history in the Valley, I was quickly hooked in learning more. When I fell down the Google rabbit hole of research, I was highly impressed with the amount of information available in early publications like The First Thirty Years, The Southern Pacific Railroad and the Development of the American West, and old newspapers, magazines, and newsletters. I was enlightened to have been able to quickly learn so much about this foundational piece of our local history.

Cantaloupe was one of the first crops to be explored when the Valley was just starting to be settled and fields were being cultivated. While melons had been grown throughout California on a small scale throughout the 19th century, the first large commercial cantaloupe fields were in the Imperial Valley at the start of the 20th century.

Our warm weather here was perfect for this sweet crop that liked the heat. Early pioneers quickly took advantage of our earlier and longer growing seasons. As recalled in The First Thirty Years, cantaloupe was first introduced in the Imperial Valley when a few growers in Brawley took interest and planted trial patches in 1904. In 1905, around 600 acres were planted. In its first couple of years, these trials were extremely successful, and the high-quality fruit led to high returns for those risk-taking growers. This new and potential-filled melon industry in Imperial Valley was one of the attractions used to attract new settlers.

While the production timeline made these Imperial Valley melons available prior to other growing regions, several obstacles stood in the way of expanding production, including shipping and cooling. Pacific Fruit Express changed that when it opened in 1907. Ice-packed railroad cars would help move Imperial Valley cantaloupe quickly across the country. However, as production grew, new problems arose as growers and distributors had trouble balancing the market in the first couple of years. A solution quickly came once the USDA’s Bureau of Markets and Crop Estimates stepped in to help in 1915.

By 1915, cantaloupe acreage in the Imperial Valley was at about 8,000 and by 1930, that increased to almost 40,000 acres. It didn’t take long for Imperial Valley to become known as the cantaloupe paradise of the country during this phase. As it continued to grow, the thriving industry was even featured in LIFE Magazine on July 15, 1940.

In its early years, the Imperial Valley was a prime example for high quality and successful cooling and shipping strategies. While we may not be the top cantaloupe producing county anymore (we are now number two in California after Fresno County), Imperial County still contributes its fair share to the melon markets, and local melon growers are continuing to use innovative practices to move the industry forward. As with other crops, irrigation efficiency and food safety are always a top priority.

According to the CDFA, melon yields have about tripled since the 1920s. This means we are able to grow more on less land. In the past thirty years, especially, improved varieties and the use of new technology like drip irrigation and plastic mulches have really helped make improvements.

According to the 2015 Imperial County Crop Report, about 877 forty-pound cartons were yielded per every acre of cantaloupe planted that year. There typically are about nine to twelve melons in a carton. So, that means, on average, each acre produced about 9,200 cantaloupes. With 5,185 acres planted in 2015, an estimated 48 million cantaloupes were produced here alone. If eight-year-old me would have known this, she probably would have asked for her dad to bring home even more of this delicious fruit growing up!

Our county’s rich agricultural history is something to be celebrated. I always enjoy any opportunity to learn about our early years and the foundation set by our pioneers. It is inspiring not only to read all of the stories of what was done in the past, but also to see all that is continuing to be done by growers in our Valley today to remain innovative, competitive, and growing as both an industry and a community.