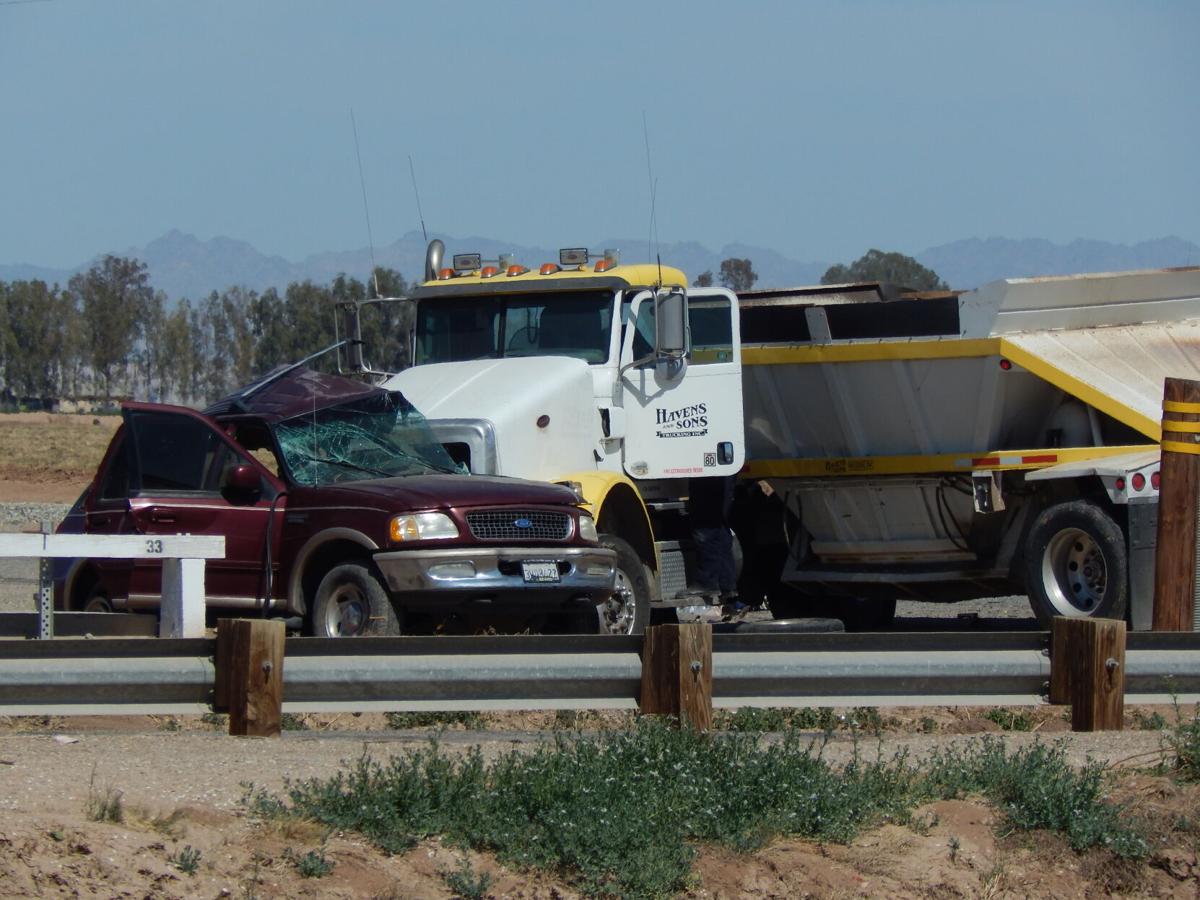 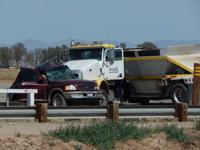 A semi-truck and SUV collided on the intersection of Highway 115 and Norrish Road early morning Tuesday, March 2, near Holtville. 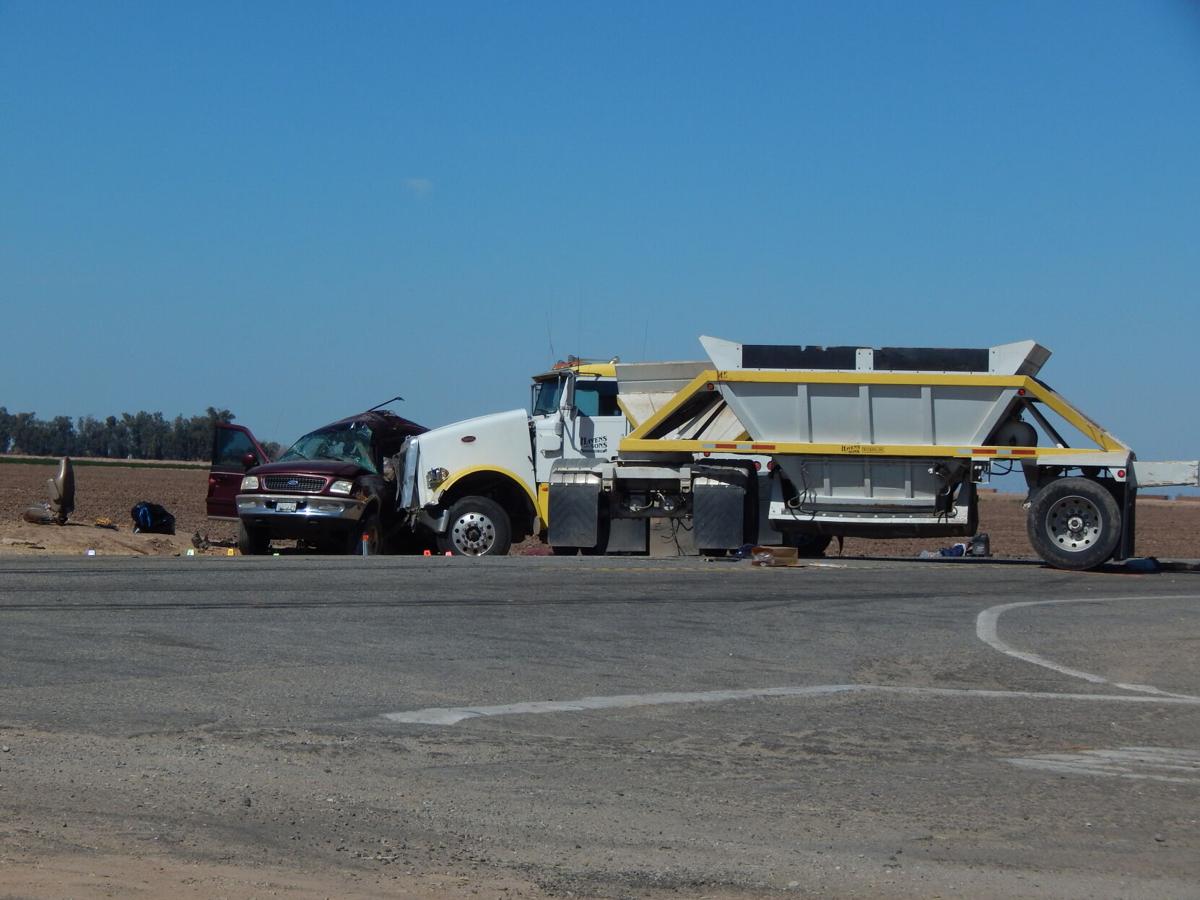 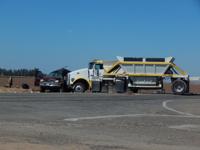 An afternoon photo shows the early morning collision between a semi-truck and a SUV with items strewn from the car including one car seat at Highway 115 and Norrish Road, March 2, near Holtville. 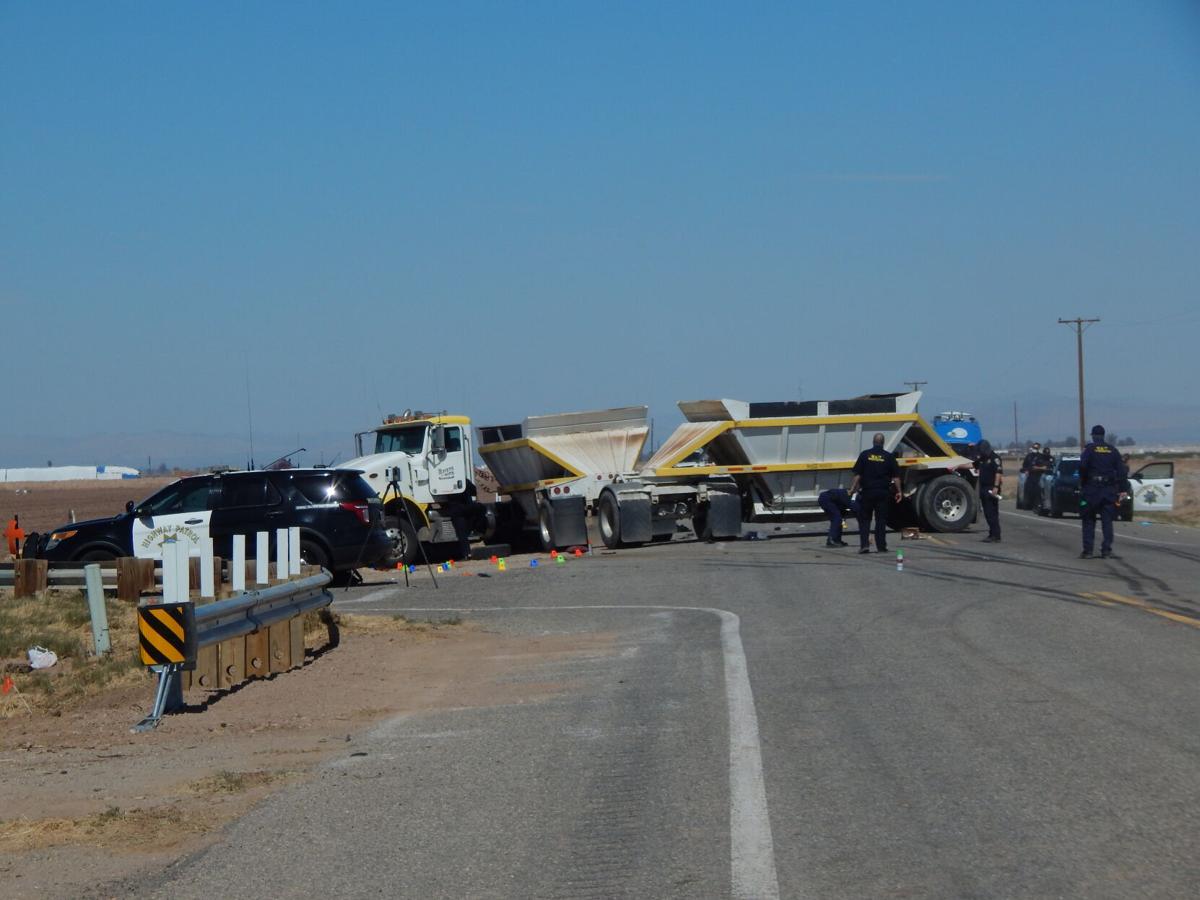 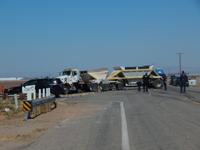 California Highway Patrol inspect and mark off the area where a semi-truck and SUV collided on the intersection of Highway 115 and Norrish Road Tuesday, March 2, near Holtville. 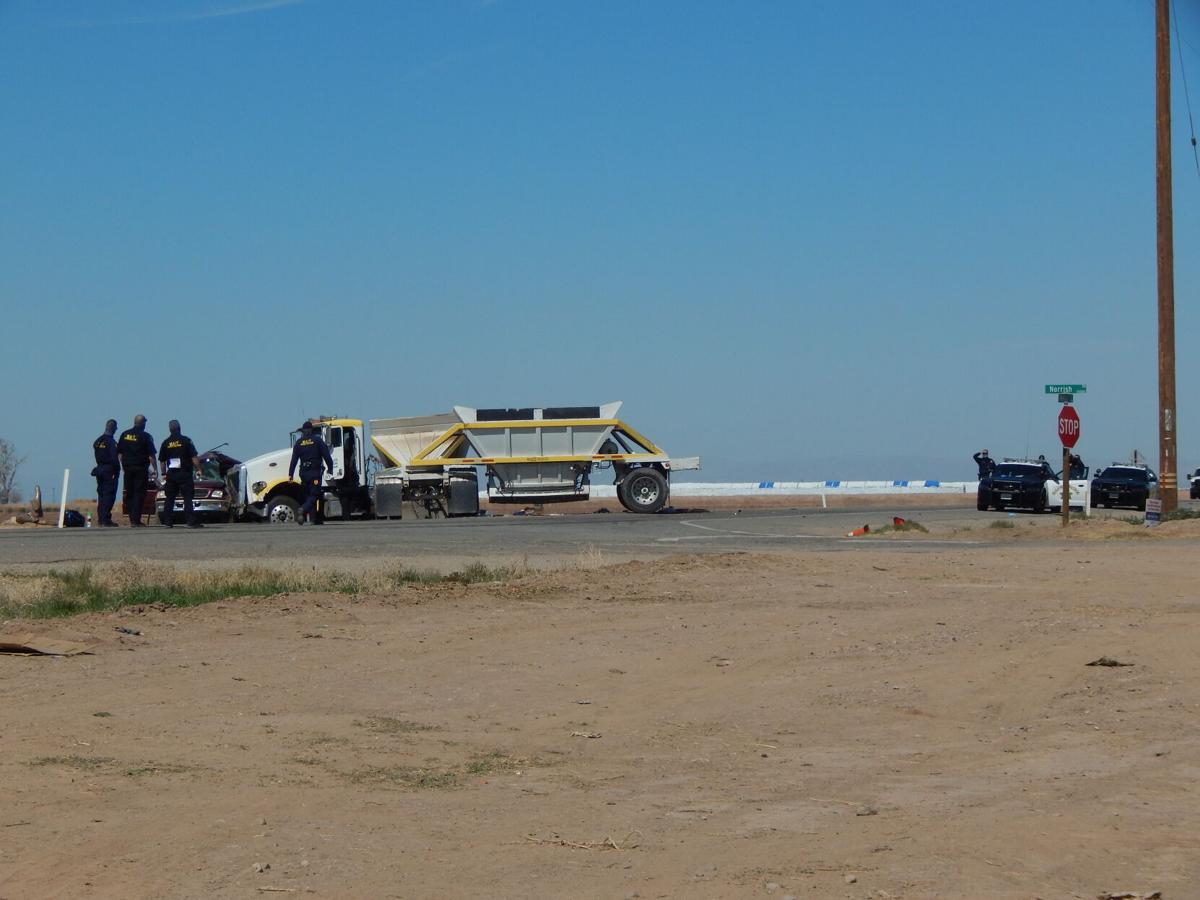 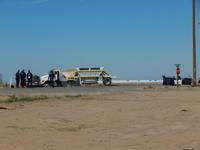 California Highway Patrol gather at the site where a semi-truck and SUV collided on the intersection of Highway 115 and Norrish Road Tuesday, March 2, near Holtville. 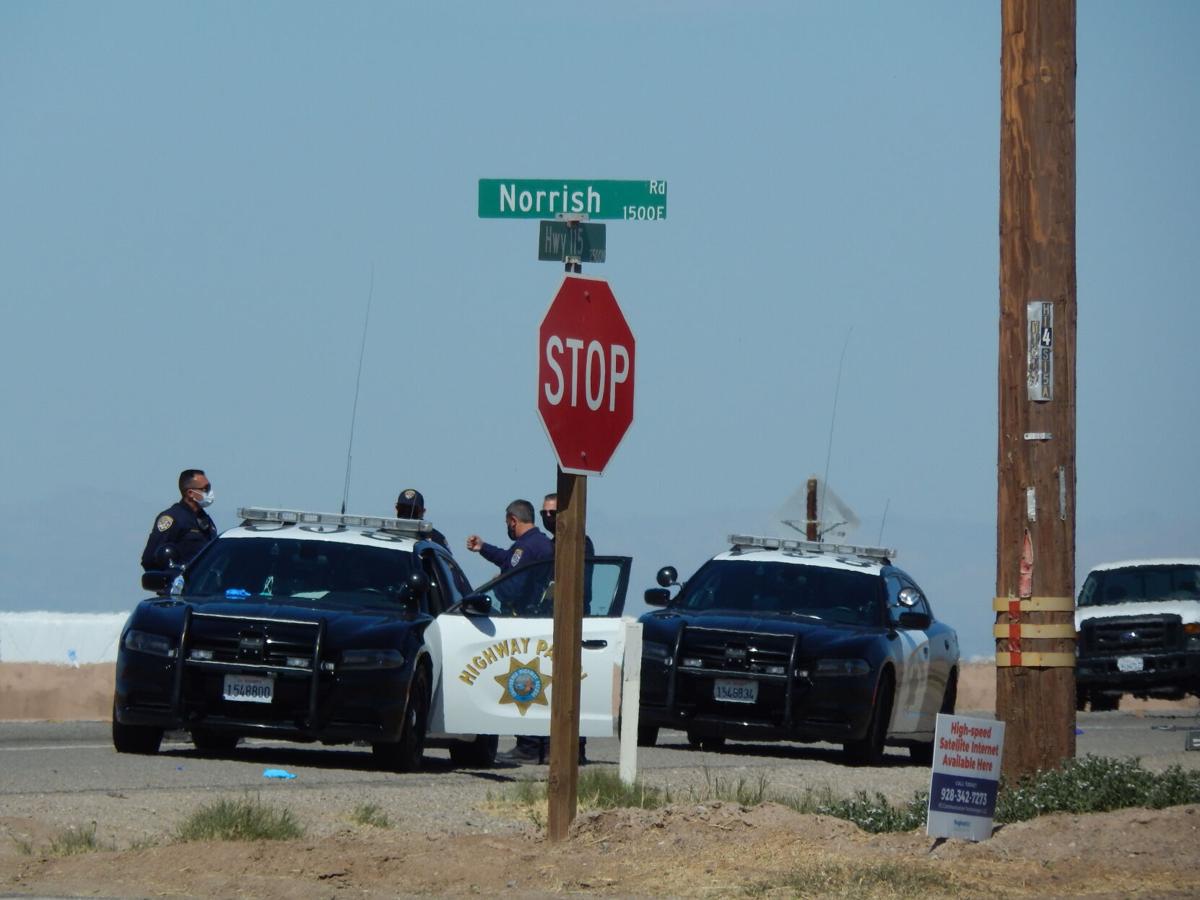 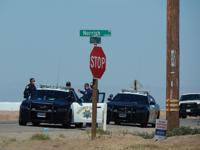 California Highway Patrol gather at the intersection of Highway 115 and Norrish Road across from where a semi-truck and SUV collided early Tuesday morning, March 2, near Holtville. 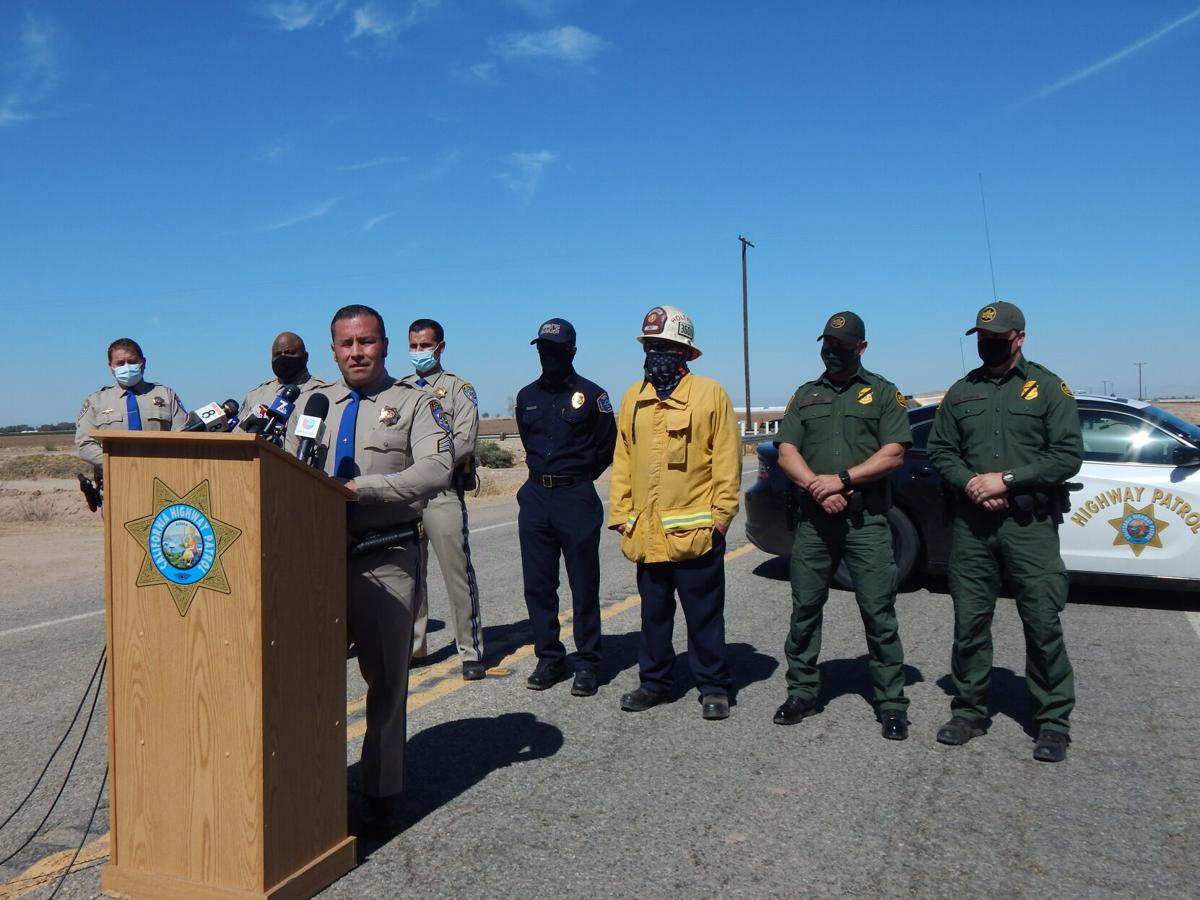 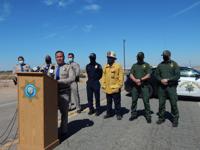 A semi-truck and SUV collided on the intersection of Highway 115 and Norrish Road early morning Tuesday, March 2, near Holtville.

An afternoon photo shows the early morning collision between a semi-truck and a SUV with items strewn from the car including one car seat at Highway 115 and Norrish Road, March 2, near Holtville.

California Highway Patrol inspect and mark off the area where a semi-truck and SUV collided on the intersection of Highway 115 and Norrish Road Tuesday, March 2, near Holtville.

California Highway Patrol gather at the site where a semi-truck and SUV collided on the intersection of Highway 115 and Norrish Road Tuesday, March 2, near Holtville.

California Highway Patrol gather at the intersection of Highway 115 and Norrish Road across from where a semi-truck and SUV collided early Tuesday morning, March 2, near Holtville.

UPDATE: The identity of one of the deceased individuals has been confirmed as 23-year-old Yesenia Cardona of Guatemala.

The collision occurred on the intersection of Highway 115 and Norrish Road near Holtville at about 6:15 a.m., California Highway Patrol (CHP) Border Division Chief Omar Watson said at a mid-day press conference near the scene.

He said 25 people in total were involved in the collision – 24 packed in the SUV and 1 driving the semi-truck – but no information was released regarding the identities of the 12 which died on scene, with one later dying at El Centro Regional Medical Center, according ECRMC personnel.

Watson said the age range of the victims is between 15 to 53 years of age and there were no infants involved in the collision. Watson said the driver of the semi-truck is 69 years old and was treated for moderate injuries at Desert Regional Medical Center, located in Palm Springs.

Watson initially estimated at least six of the passengers in the SUV were thrown from the vehicle and died on impact but was unable give exact specifics regarding how many of the dead were thrown and how many crawled out of the vehicle and perished before El Centro CHP personnel arrived on scene within approximately 10 minutes from the 6:15 a.m. call. Watson confirmed tire skid marks were seen on the SR 115 pavement but said it was "too early to tell" specifics on how much time the semi-truck had to stop when the SUV entered Highway 115 from the east.

Watson said the collision occurred as the semi-truck was heading northbound on SR 115 and the SUV was headed westbound but due to the early nature of the investigation it is unknown whether the SUV stopped at the stop sign posted at the intersection, nor rates of speed of the vehicles. He said the semi-truck did not have a stop sign on the highway and was not hauling any cargo in the trailers at the time of collision.

Watson said the SUV was a late model Ford Expedition which sustained “major intrusive damage.” Watson said further inspection in the afternoon showed the SUV only had a driver’s seat and one front passenger. Watson said the driver of the SUV – who was one of the 12 who died on scene – was a resident of Mexicali but did not reveal any further identifying information of any involved.

“The remaining people are in conditions from moderate to life-threatening,” Watson said, “so they're all being treated and hopefully the numbers stay where they're at but that's unknown at this point.”

Watson said there were no law enforcement present at the time of collision. CHP Border Division Sergeant Juan Garcia said it was unknown if the passengers were field workers, being human trafficked, or anything of that sort.

“It's very early in the investigation,” Garcia told the media in Spanish. “All of that will be determined by our investigation team. Once they have all the information they need they will determine that information with more clarity.”

Both CHP and ECRMC personnel said they are working with the Mexican Consulate to identify those in the accident, but Watson said it was unknown if any more were Mexican nationals or Imperial Valley residents.

ECRMC Emergency Room Managing Director Judy Cruz said seven of the victims were transported to ECRMC, with one later passing away in the ER, making ECRMC the hospital which initially received the most victims.

ECRMC emergency room Dr. Shavonne Boschert said several patients were transferred from ECRMC and “those were the most critically ill ... that were flown from the scene.”

“The ones that came in to us had injuries ranging from fractures, head injuries, life threatening injuries, chest injuries,” Dr. Boschert said, “… but the others are stable and have been stable for transfers.”

Three of ECRMC’s seven victims were transferred to Pioneers Memorial Hospital, with two of those three later transferred from Pioneers to Scripps Mercy Hospital in San Diego, according to various hospital media relations personnel.

Of the two transferred by air from PMH to Scripps, one was identified as a male teen who arrived late morning and the other an adult female who arrived in the afternoon, said Keith Darce, Public Relations manager for Scripps Health.

Watson said in a later afternoon update that one patient has been released from a hospital. ECRMC and PHM did not have information available by press time as to whether the patient was one of their remaining patients, but DRMC and Scripps both confirmed the released patient was not from their hospitals.

“It's unfortunate that that number of people were put into that vehicle because there's not enough safety restraints to safely keep those people into that vehicle,” he said, later adding by his estimate only six-to-eight passengers could have been safely in that vehicle if the vehicle contained more seats and seatbelts.

Watson said, unfortunately, CHP sees over-filled passenger collisions throughout California, also occurring in other parts of the US.

“Our message to the public is to, one, watch their speed,” he said, “and to make sure that they are wearing their safety restraints in case that they are involved in a collision so that they're not potentially ejected from their vehicles.”

"It would be premature of me to speculate on what happened at this collision; the important thing is that 13 people died in this crash," Watson said. "We owe it to the people that were killed, as well as the public, to determine exactly what happened. Our message to the public is that everyone wear their safety belts."

“It's a very sad situation and we're working collectively with these agencies to find out exactly what happened and come to a resolution for this,” Watson said.

“Once the investigation is complete, it will be thoroughly reviewed and handed to the District Attorney's Office,” he said.

Watson and Garcia said that section of the Highway 115 will remain closed for several hours Tuesday to allow for the investigation but did not give a specific time frame.