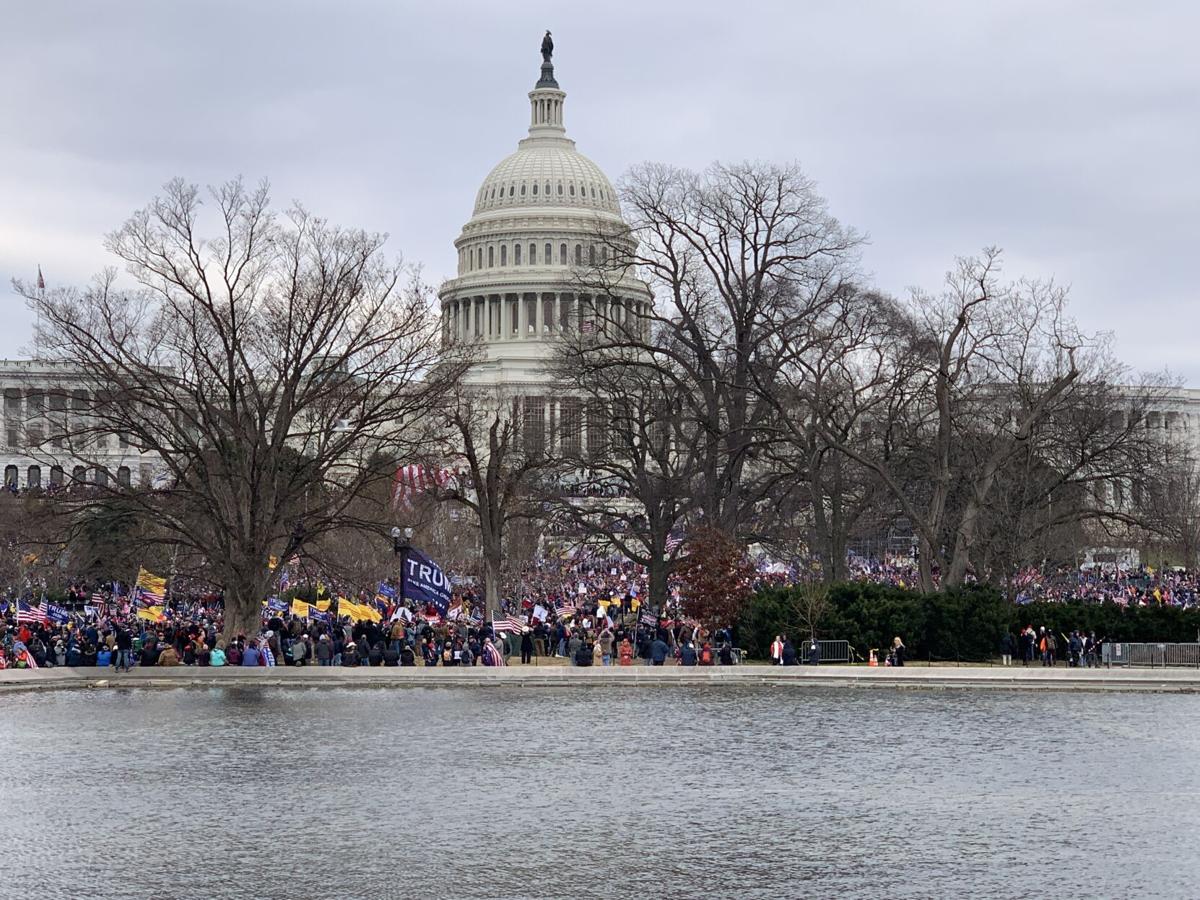 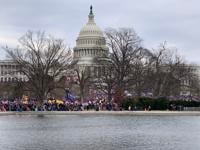 People filled the lawn and stairways at the US Capitol building Wednesday, January 6. 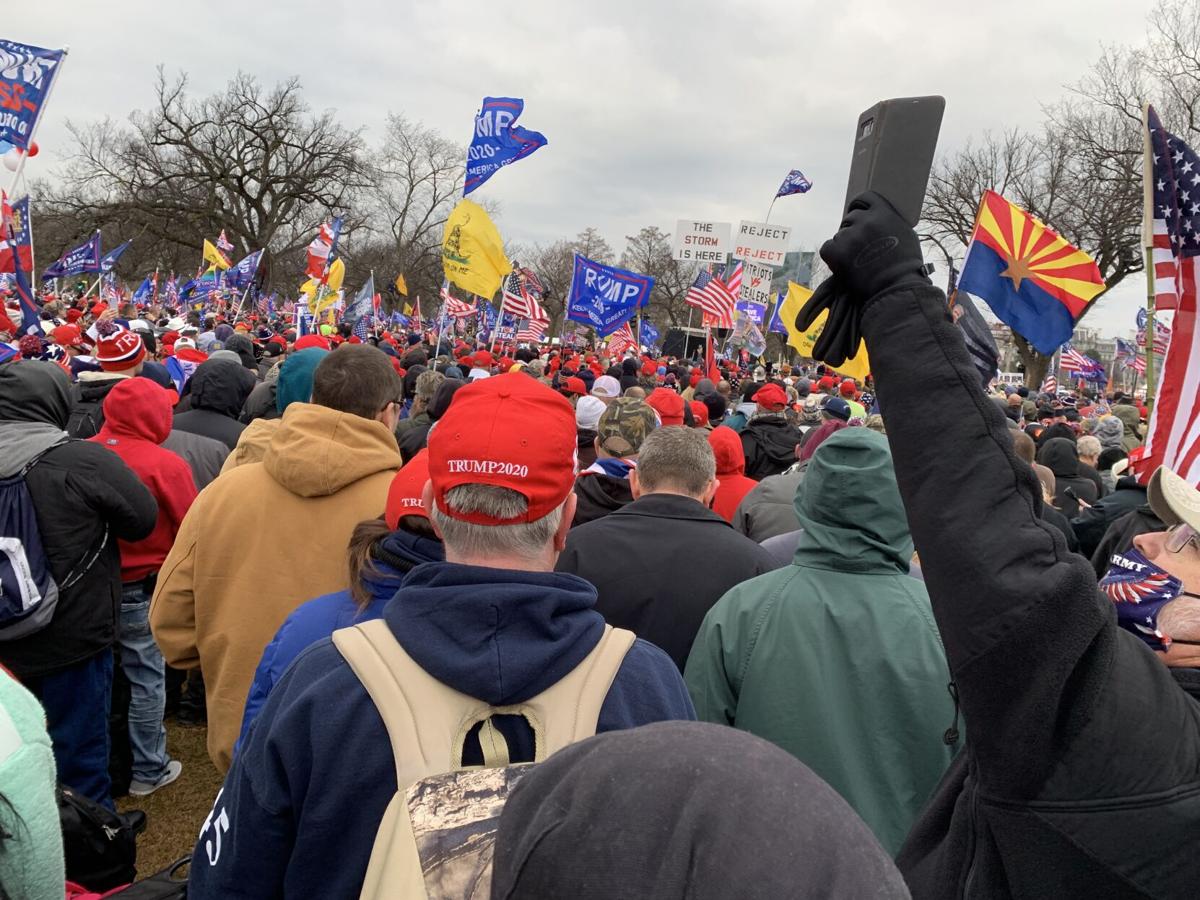 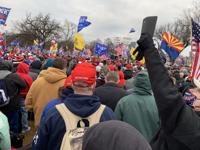 Crowds thicken as Trump supporters arrive at the Ellipse, the south lawn of the White House, Wednesday, January 6.

People filled the lawn and stairways at the US Capitol building Wednesday, January 6.

Crowds thicken as Trump supporters arrive at the Ellipse, the south lawn of the White House, Wednesday, January 6.

Trump supporters were easy to recognize, either by their apparel bearing his name, or by their choice of red, white, and blue clothing. They were on planes, in hotel lobbies, and eventually, Wednesday, January 6, walking on the Washington Mall to the Ellipse where the Trump Rally was held.

The day was bitterly cold, at least for this desert rat, overcast, and the ground soggy from a recent rain. Undeterred, Trump supporters waved their flags, blew shofars, and walked to the south lawn of the White house. Estimates were from one million to one-and-a-half million people attending by the U.S. National Park Service website. What surprised this reporter the most were the number of Chinese Americans at the rally.

Many had petitions to sign against the Chinese Communist Party (CCP) with vans draped in banners condemning the brutal regime, others were handing out flyers outlining the case against the Chinese Party. Also surprising were the Chinese American citizens that flocked to the rally with children in hand.

The introductory question for most was, “Where are you from?” The Chinese family that befriended our group was from Orange County. As more and more people filled the Mall, moving became problematic. People called it a “Trump Train” as following the person directly in front of you was the only way to navigate from one area to another. Our Chinese friends accepted us into their group, making sure we did not get lost. We stayed with them also for the reason one of us was freezing and Alice, a 20-something student donated her wool scarf for the cause. We eventually wanted to return it so staying close made sense.

When our group eventually found a spot to see the jumbotron of the main stage with a somewhat decent sound system, the first person we met was a newspaper publisher from southwest Colorado. He also had his camera out taking photos. He said he would do a “double truck” of the rally once he got home. A double truck is newspaper language for dedicating an inside layout of two contiguous pages without margins.

It soon became clear that as the crowd jostled and “trains” moved us from our good spot, we could not see nor hear the speakers. We had lost our friends, yet we still had Alice’s scarf. And we were freezing cold.

We decided to return to our rooms to listen to President Trump speak. We had 40 minutes to navigate through the crowds and make a break for our place.

Many more were still filing in than were leaving. Every color, age, handicapped, and language passed us on the Mall. Entrepreneurs were out in full force selling Trump flags and paraphernalia. The Washington D.C. mayor had closed all restaurants in anticipation of the rally, but a few food trucks decided to endure the wrath of the mayor for the money of a hungry crowd. The mayor had also closed all streets, which didn’t have much of an effect as most walked from their hotels. There were buses and buses lining the streets also to bring people to the rally. Several we talked to choose to stay in nearby Virginia rather than the Capitol.

We had packed our suitcases with deli food in anticipation of no restaurants and broke out a hotel room picnic as we watched the president speak in the comfort of our heated room.

Defrosted, we planned to return to the Mall and head for the Capitol where, for the first time, the evidence of an allegedly stolen election was going to be presented to the American people via congressmen’s speeches as certain ones were going to contest five states electors.

Before we could put on every piece of winter clothing we brought, news broke of the Capitol being breeched. We sat captivated and in horror seeing the scenes everyone has now seen multiple times.

Our hotel was rather close to the Capitol, and we decided to go to the Mall in the direction of the action, but not too close. We passed several families warning us to not to go there, telling us of shots fired, tear gas, and Antifa.

We asked another group that looked shaken what they knew. If they had heard it was Antifa.

The young man describing the scene was very emotional. The women had tears in their eyes.

As we were still a ways off and safe, we continued in the direction of the Capitol. Meanwhile, police cars screamed toward the Capitol, lights flashing, sirens blaring followed by ambulances and fire trucks.

We were constantly warned to not go the Capitol by those leaving the scene. We were not going to get caught up in the riot but felt safe by the sheer number of people at a safe distance watching.

We stopped by the reflecting pool across from the Capitol and like many, sat on the cement lining the pool.

We could see the Capitol steps filled with people as well as the space surrounding the building. But there was no movement. People had climbed the trees, the statues, and anything else with height to get a better view. We saw few police during the entire rally, just the police cars flying to the riot.

As word spread that the congressmen, senators, and staff had been evacuated, the debate had been stopped before it had been started, and arrests made we decided to head back to our rooms.

The mayor had issued a curfew for 6 p.m. Wednesday, but we had always planned to be locked in our hotel rooms well before dark. We anticipated riots starting, but we were wrong. The night was quiet.

The next day we walked to the Lincoln Memorial and many other famous locations in our Capitol City. Groups of people spontaneously broke out in patriotic songs, still carrying the American or Trump flag, still polite, nice, and patriotic as the day before, or at least the ones we met and saw. We kept an eye out for our friends, as we still had the scarf, but no luck. Now the scarf will be an enduring memento of a historic day.

A first hand account of a historic day in Washington D.C.