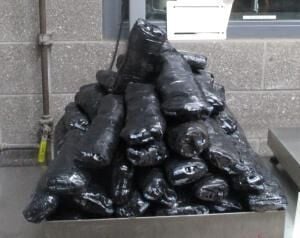 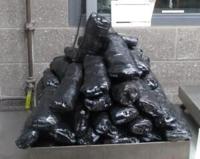 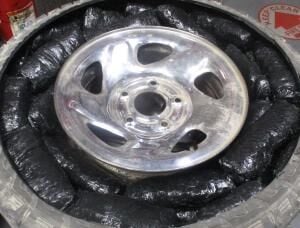 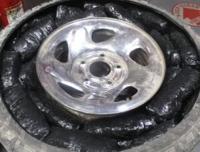 CBP officers discovered more than 57 pounds of narcotics concealed in this spare tire.

SAN DIEGO — US Customs and Border Protection officers in the San Diego Field Office thwarted three more narcotic seizures in the month of July, according to a press release.

These recent interceptions come on the heels of nine other significant narcotic seizures that occurred in the same month.

“These impressive drug seizures highlight our officer’s commitment to keep our border secure.” said Anne Maricich, CBP Acting Director of Field Operations in San Diego. “Our frontline officers continue to maintain a robust enforcement posture and are successfully disrupting the flow of dangerous narcotics from entering our country.”

The most recent seizure occurred on Sunday, July 24, at about 9 a.m., when a 31-year-old female applied for entry into the US by presenting her California driver’s license to CBP officers at the Tecate port of entry.  The officer referred the vehicle and occupant for further inspection.

CBP officers scanned the vehicle using the port’s imaging system, similar to an x-ray, where they noticed anomalies in the trunk area.  A CBP officer screened the vehicle with his assigned human/narcotics detector dog which alerted to the floor of the vehicle.  CBP officers removed and seized 25 packages containing fentanyl, heroin, cocaine, and methamphetamine concealed in the spare tire well with a total weight of 57.17 pounds.

The second seizure happened at the San Ysidro port of entry at 7:45 a.m. on July 23.  A 54-year-old male and his vehicle were referred for further inspection after a K-9 alerted to the undercarriage of the vehicle as he was waiting in line.  The driver presented his California driver’s license when he applied for admission into the United States.

During the inspection, officers discovered 33 packages of fentanyl, weighing 47.17 pounds, in the gas tank and doors of the vehicle.

The day before that seizure, on July 22, at about 12:15 a.m. a driver, identified as a 52-year-old male in possession of a legal resident card, was removed from the vehicle and escorted to the security office after CBP officers observed several packages concealed in the vehicle.

The fentanyl, heroin, cocaine, and meth have a combined estimated street value of close to $1.4 million. CBP officers seized the narcotics and vehicles.

All occupants were turned over to US Immigration and Customs Enforcement (ICE), Homeland Security Investigations (HSI).