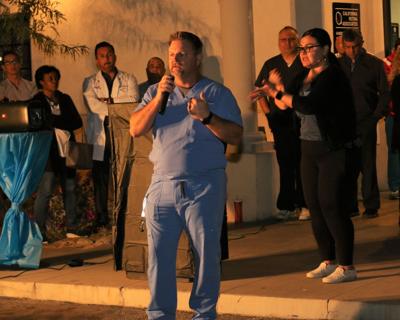 Doctors, nurses, public service representatives, and community members attended the outdoor conference, several with personal and familial ties to the institution that has provided protection and life-saving services to a vulnerable population in the community – infants and children.

Tara Malcomb, clinic manager at Imperial County Physician's Medical Group and social media organizer, opened by speaking of her own experience surviving severe health complications during the birth of her children. The very ECRMC departments slated for closure, she said, had made all the difference in ensuring the safety of her and her child during what she called “the most challenging chapter” of a complicated delivery. Known among those in attendance for her involvement in the creation of a social media protest page, she thanked those in attendance for their support and celebrated the tremendous amount of traction the page garnered in a brief period of time.

Dr. Alfredo Negrete spoke on behalf of hospital staff and the “sudden disruption” in future plans and daily activity the announcement had caused for ECRMC employees. Dr. Negrete has served the Valley for nearly 22 years as a pediatrician and expressed disappointment in the decision to consolidate departments between ECRMC and Pioneers Memorial Hospital (PMH) in Brawley. In a scathing review of the previous week’s happenings, he emphasized the sudden nature of the announcement as well as the incomplete actions taken towards formulating a respectable solution for all.

While quick to acknowledge the genuine issues that face ECRMC in its current state, Dr. Negrete vocalized his concerns of the ripple effect of an action that was “decided behind closed doors” that will inevitably “put people in harm’s way.” In addressing the somber crowd of attendees that spilled out of the parking lot, he juxtaposed the energy of those behind the decision, saying that the closure of his department “puts the interest of shareholders ahead of human life” and yet proved to be cause for celebration for some. As a final remark, Dr. Negrete stressed that in his years of experience as a medical professional, “minutes are the difference between life and death” and assured the public that he and his colleagues “will not stand idly by.”

The speakers that followed were a mix of ECRMC administrative staff, active and retired public service representatives, medical professionals, and concerned community members. One speaker, the chair of the OBGYN department, reminded the audience that the facility serves almost 1.5 million people and that citizens in crisis will now have to rely on institutions as far away as Yuma, Palm Springs, and even San Diego. County Supervisor Luis Plancarte criticized the ECRMC board of directors which chose to “hide behind a veil of secrecy” and lamented that those most affected by the decision were being “kept in the dark.”

While some that took the stage expressed hope for the situation, the dominant sentiments expressed were disappointment and outrage. With Imperial Valley being the poorest county in California, a nurse and ex-military member remarked that in his experience, “nearly 80% of patients are on Medi-Cal and Medicaid,” calling ECRMC a “critical access hospital.” “Every single one of us is a patient,” he said.

Also of concern for many was the effect the decision will have on the ability of PMH to effectively and efficiently treat the onslaught of critical care patients to come. Other speakers reminded attendees of the institution’s struggles to manage recent influxes of patients either due to global events like the COVID-19 pandemic, and even smaller strains on staff caused by higher-than-average cases of the flu. “[The services] we have now are not enough, and to take even more away is a slap in the face,” said Jesus Escobar, District 1 Supervisor of Imperial County. “This is an equity issue which will likely get worse before it gets better,” he said.

The decision was allegedly made without the advice of medical professionals and those with intimate and direct field experience many said. Speakers referred to the ECRMC CEO and board of directors as “out-of-towners” who had no business deciding the fates of a community they do not fully understand. Speakers pointed out that the 12 miles between ECRMC and PMH will prove to be especially difficult for those in critical condition or with severe complications, as well as the elderly and those without reliable transportation. A female pediatrician highlighted the unique disadvantages the partial closure will have on the community’s pregnant women and children, the two demographics that are vulnerable.

Some speakers speculated that over 70 nurses and staff members will be displaced because of what the ECRMC board is calling a consolidation. Other personnel have left their positions preemptively.

“A couple of days before Christmas, we were told to find a new job,” said one nurse. He wondered aloud if he would soon find himself on unemployment, given that options for employees have become increasingly limited.

The disorder that ensued came after the official decision was shared with nurses on December 21 via Zoom. Communication between ECRMC and PMH gave conflicting messages, leaving several employees confused and misinformed.

“For some reason, two separate Zoom meetings were scheduled at the same time,” explained one nurse. “I had my iPad in one hand and my phone in the other, and what we were being told by [each institution] was incongruent.”

The nurses whose jobs were affected were then told there would be transfers, though administration was not able to follow through on their word. This left some to reapply to PMH or transfer to a different department altogether.

Older community members recalled the similarities between ECRMC and the closure of the Calexico hospital. They noted the process of a partial closure involving the very same Women’s and Pediatric departments, which ultimately led to its demise. Even the wording surrounding the decision struck some as eerily similar.

Concerned community members expressed discontent that much of what they have heard about the decision until now has largely been via word of mouth from friends and neighbors. Recently, Malcomb has managed to garner over 100,000 views on the protest page in just the three days since its launch. A petition is currently circulating the community, though social media seems to be the primary avenue for receiving the latest news on how to stay involved in this protest.

The final speaker of the evening, an elderly gentleman wearing a Vietnam Veteran’s hat, summarized the evening’s call to action in his own words, saying “I may not know how to stop this bleeding, but I know that first we need to apply pressure.”

This is not a new thing folks, this happens quite a bit. Not sure how the poorest county in the entire state believes it can finically support two different hospitals that replicate services while being reimbursed with pennies on the dollars by medic-cal and Medicare, or not being paid at all. To be candid I'm surprised this did not happen 20 years ago.