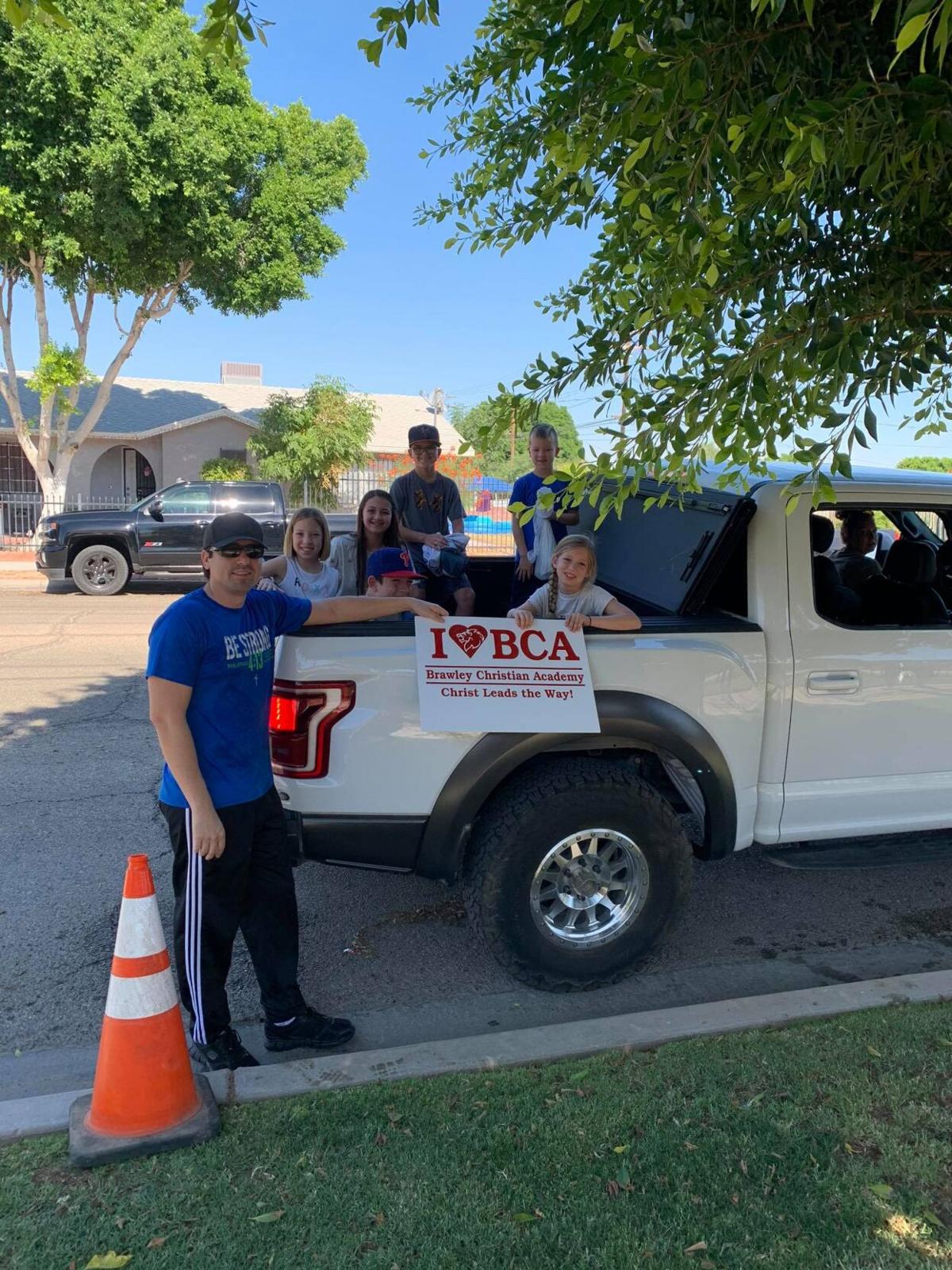 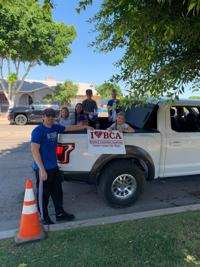 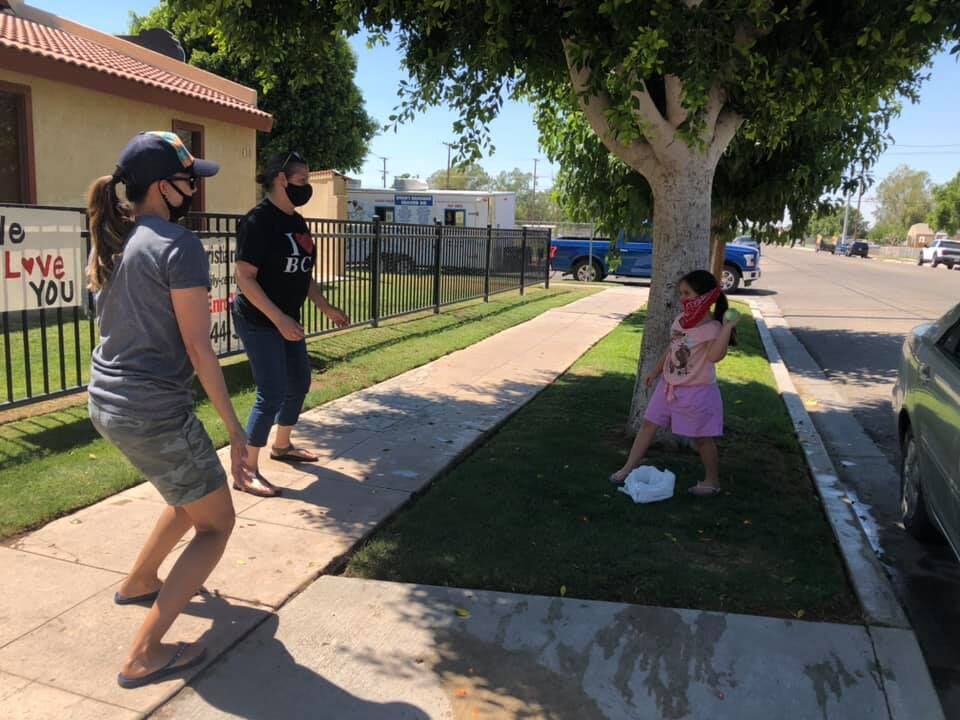 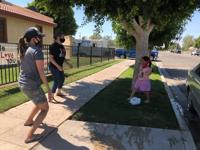 FROM LEFT: Brawley Christian Academy staff members Vilma Mapes and Kathy Fernand brace themselves for a water balloon from a BCA student during a drive-bye water balloon toss June 11.

FROM LEFT: Brawley Christian Academy staff members Vilma Mapes and Kathy Fernand brace themselves for a water balloon from a BCA student during a drive-bye water balloon toss June 11.

BRAWLEY — Students going back to school is still being hammered out by state and county officials as local schools and parents in the Imperial Valley prepare for more than one scenario to open the 2020-2021 school year in August or September.

Newsom announced all schools within the counties on the State’s COVID-19 Monitoring List cannot physically open for in-person, on-campus learning. Newsom declared all schools within monitored counties must start in a distance learning model until their county has come off of the Monitoring List for 14 consecutive days, a decision which has since landed the State in a lawsuit.

All K-12 schools within Imperial County must remain physically closed as the County is still on California’s COVID-19 Monitoring List.

Pre-Kindergarten programs are still available at the private schools in which they are found as they fall under different guidelines and are being made available as childcare for essential worker families, particularly first responders, according to local private school principals in Brawley and El Centro.

“We've been operating as a ministry for Christian education for 25-plus years and this is the first time that we've really been in danger of not being able to open, not because we don't want to, but because of the requirement to distance learn,” Brawley Christian Academy (BCA) Principal Antonio Flores said.

“Our desire is to have on-site, in-school learning,” Flores said. “Obviously, that would be illegal to do so while the County is on lock down for our schools but we're hoping that the lock down will be lifted by the time school begins.”

Flores said BCA has worked very hard to meet the State’s mandates for COVID-19 protocols, as evidenced by a school newsletter dated June 22, which outlined the previous plan for BCA to start school on-campus August 31 before Newsom’s announcement.

The school — which normally enrolls about 100 students — lowered their maximum enrollment capacity from 120 to 65 students total, reduced their number of school days from 180 to 150, changed the school’s daily and weekly schedules — including cutting down from five to four days each week with Fridays available as an optional fifth school day at an additional cost — and an increase to base tuition by $30 monthly, according to the school letter.

Principal Flores said those raises in tuition were made in their former plan to offset costs of extra sanitation and the changes in staff wages due to losing school days to make the COVID accommodations.

“We had made accommodations to be in compliance with all of these new regulations; you name it — the cleanliness, six-foot distancing, the hand sanitizers that are hard to find and expensive, the masks — my goodness, you name it,” he said, “but now we can't even have students in our classrooms.”

With Newsom’s announcement, it’s back to the drawing board for BCA, as the school has now been planning for three different scenarios in their now-further-delayed first day of school, slated for September.

“School is supposed to start a little over a month from now and it's such a big, big deal and it's not affecting public schools; it's affecting charters and private schools, and probably satellite and smaller schools,” Flores said. “It's really frustrating. It's really setting us up to pretty much cancel.”

“It's just that there's so much and it's constantly changing, you know,” said Sacred Heart School Principal Annalisa Burgos.

“Week to week it changes and we're working on our re-opening plans and then new information comes out,” she said. “There's so many links and guidelines that it's hard to sort through everything sometimes but we're doing a good job.”

“I think that we are well prepared and we're small enough that we can definitely bring students back to our school safely when we are allowed to do so,” Burgos said.

Burgos said Sacred Heart will have pre-Kinder instruction, but the 75-to-85 student school is prepared to start their year with distance learning August 19.

The two Brawley private schools are not alone in their concerns, as some smaller public schools also said they can meet all of the State’s COVID-blocking requirements due to their smaller student populations and class sizes.

“From our perspective, we're looking at submitting a waiver (for in-person learning), but whatever we do, we've got to make sure we keep our students safe here at school,” said Magnolia Union Elementary District Superintendent and Principal Blaine Smith.

Smith said Magnolia is preparing teachers for distance learning with in-service workshops, but Smith also said Magnolia school is looking at on-campus waivers as a possibility after going through the various stages of approval by their school board, County Public Health, and ultimately the California Department of Health.

“It's not like you just fill out a form and you get a waiver,” Smith said.

“For us there are many reasons for our kids to be in school,” said Kalena Rebollar, Brawley resident and Magnolia School parent of three. “It's not just education; their mental health is a big thing for us, and it’s not just for our kids but for the kids that they're around.”

The letter said Magnolia School put together a Return to School Committee a couple of months ago and urged Munday and Finnell to “reconsider your evaluation of the schools and any waivers that are submitted on a district-by-district basis.”

Finnell and Smith said there was some misinformation regarding the Public Health Officer’s statement at a recent meeting. The Rebollars were under the assumption waivers for on-campus learning would not even be considered by Munday.

While an official from the County Public Health Department said two private schools have attempted to submit waivers. Finnell said those were more likely inquiries from the schools rather than formal submissions as the waiver isn’t in place yet.

“No one has pre-determined that waivers aren't going to be granted or anything else,” Finnell said. “And again, they wouldn't be able to submit it yet, not just because the forms aren't available, but because (schools) would have to meet all those criteria.”

While Finnell said the waivers are only available to elementary school districts, every waiver will be evaluated, and he is “personally supportive of any waiver where (schools) can meet the requirements of the waiver and it can be safely accommodated.”

Finnell said ICOE and the Public Health Department have been collaborating closely to draft the final version of the waiver for the County. However, both organizations are waiting for the state to clarify exactly what the waiver process would entail.

Finnell said districts and private schools would need to submit waivers directly to Public Health and Munday, as Finnell and the ICOE’s role is to support and consult with the districts. He said ICOE is helping ICPHD finalize the waiver forms this week.

Finnell also said parents have the choice to send their child back to school or not. The school’s reopening does not mean students are required to go back to school.