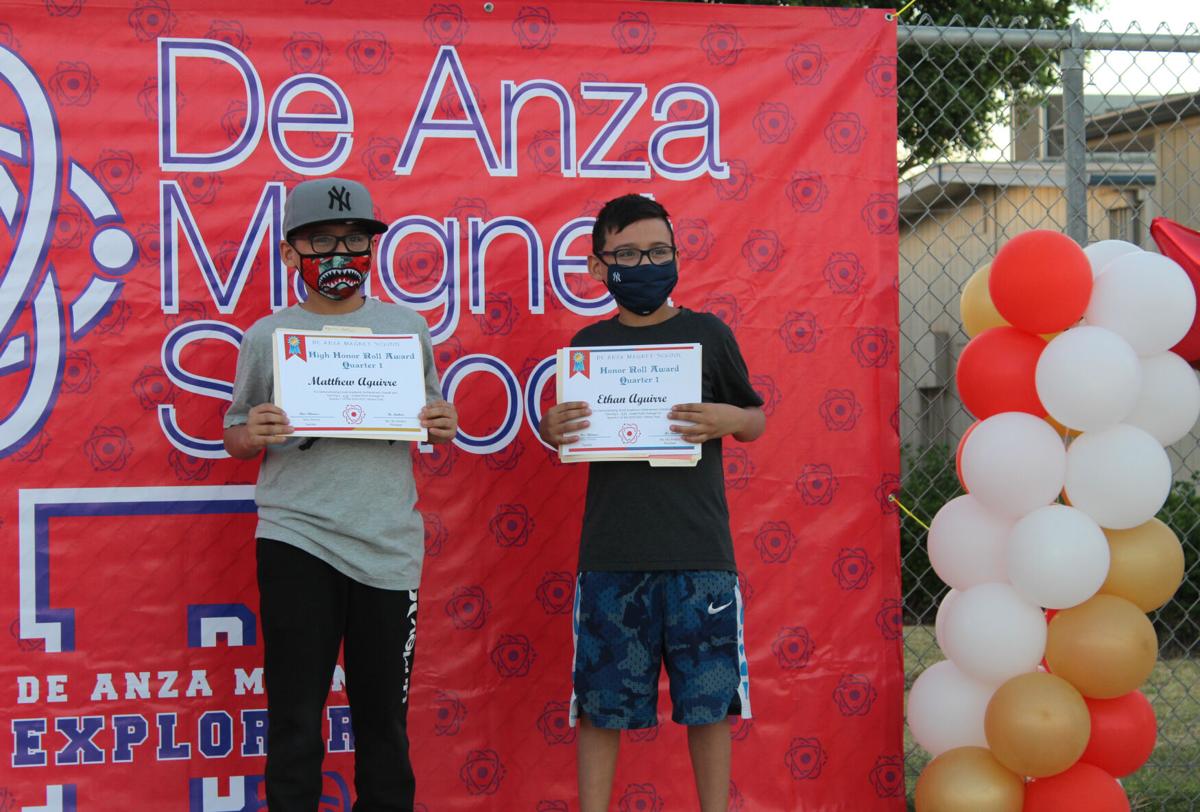 Brothers Matthew and Ethan Aguirre pose for a picture after receiving their honor roll certificates. 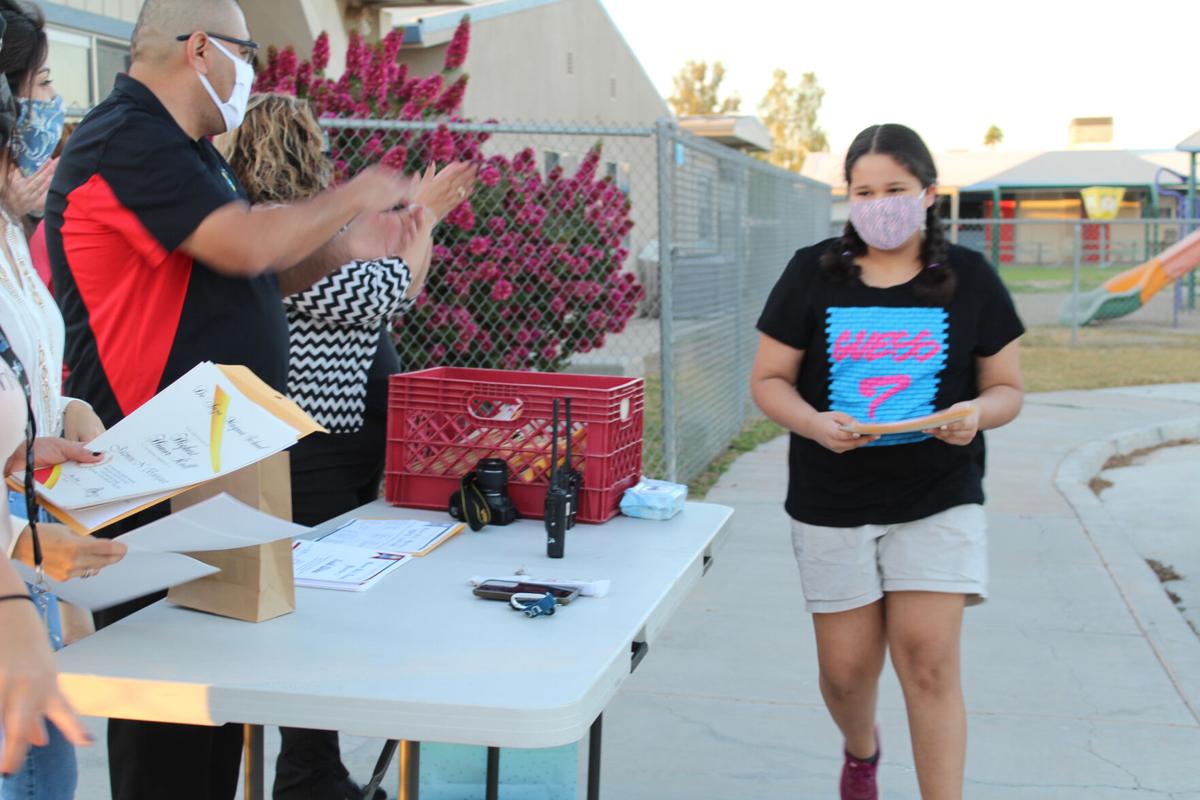 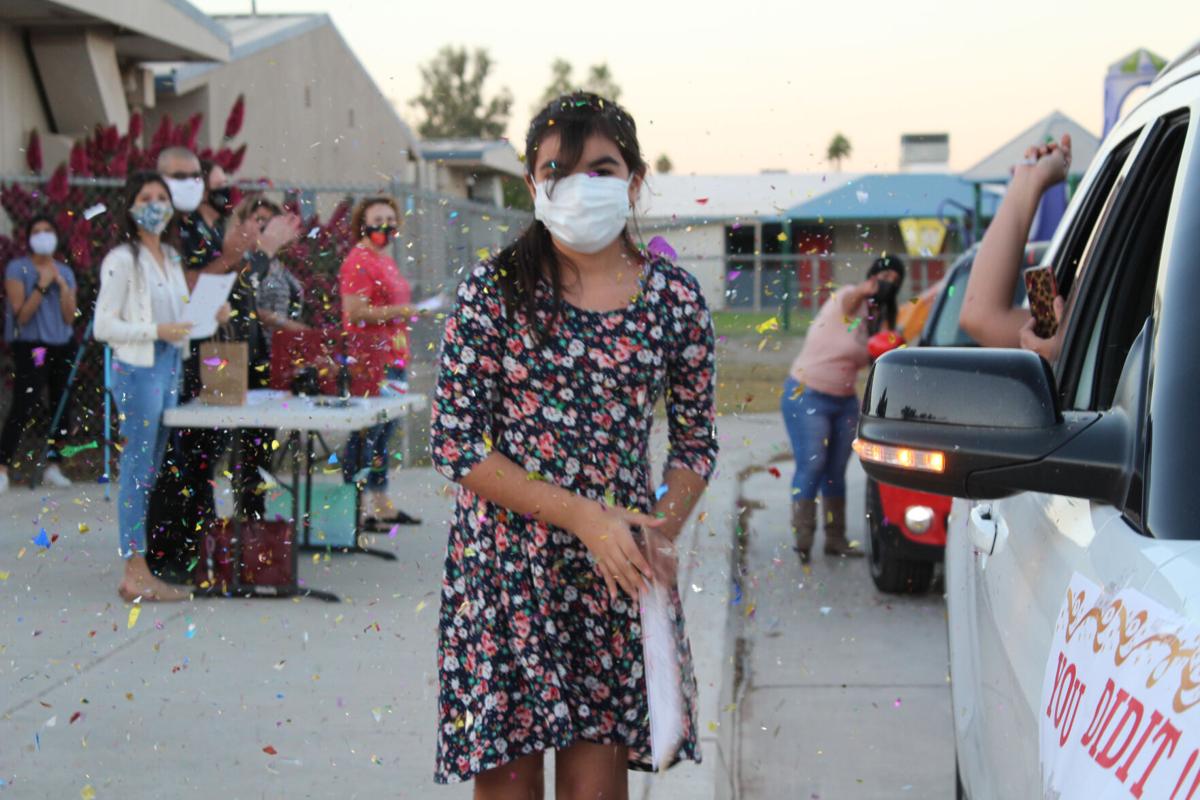 De Anza student Andrea Galvan is showered with confetti by her family after getting her honor roll.

Brothers Matthew and Ethan Aguirre pose for a picture after receiving their honor roll certificates.

De Anza student Andrea Galvan is showered with confetti by her family after getting her honor roll.

EL CENTRO — De Anza Magnet School student honor roll celebration was a bit different this month, turning the traditional assembly into a car parade that honored the success of students for the first quarter Tuesday, November 17.

Principal Maria J. Ambris said the school wanted to do something for the kids to honor all their hard work during the first quarter of the year while still maintaining social distancing for the safety of everyone.

“We decided let’s try this, instead of just having them come pick it up at the front office,” said Ambris. “It gives them an opportunity to get out of the house, get to know some of their teachers, and just engage with the school because we are very proud of them.”

De Anza held a similar ceremony for their 8th grade promotion in June, according to Ambris.

In a scene much like the graduation ceremonies of the summer, families in cars — either plain or decorated in balloons and paint — pulled up to the front of the school and dropped students off with blaring horns to pick up their certificates. Teachers were waiting to hand them their certificates before taking a picture and receiving a shirt. Ninety-seven students were honored for their academic achievements.

Soren Dorantes not only received an award for honor roll, but also got a basket recognizing her win in the El Centro Elementary School District’s earthquake poster contest.

“It’s pretty cool that through the pandemic the teachers are still putting effort into congratulating students,” said Dorantes.

“It feels really fun, because right now we are in the house a lot and it’s nice to get out and have a little parade,” said 6th grader Savannah Marquez.

De Anza teachers at the parade were proud and pumped to celebrate all the students achievement.

Fourth grade teachers Ms. Diaz and Ms. Vazquez handed goodie bags to all of the 4th-grade honor roll students. They said they were sad they couldn’t give them hugs.

“It’s nice to see them from more than just the nose up!” said Diaz. “We haven’t had the opportunity yet to meet them in person.”

Eighth grade teacher Ivette Gonzales cheered all students but did special jigs and cheers of “That’s my student!” when her own students were announced.

“There is nothing like face-to-face contact with your students, so to see their joy and for them to be able to show up to school and receive their awards,” said Gonzales, “to be here with them, to celebrate with them, to rejoice with them, what better?”

Ambris and the De Anza staff were so happy with the success of the parade and considered making it a regular event.

Any students who were unable to attend the parade are to pick up their certificates at the De Anza front office.