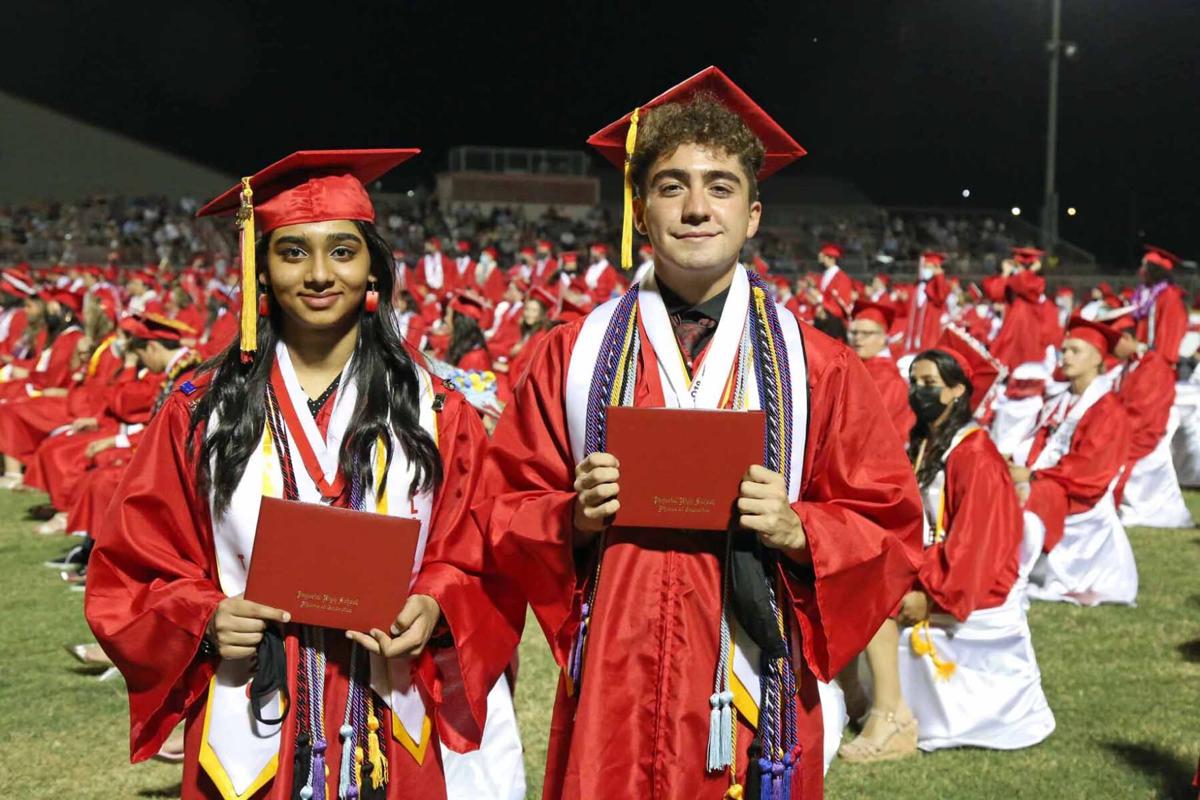 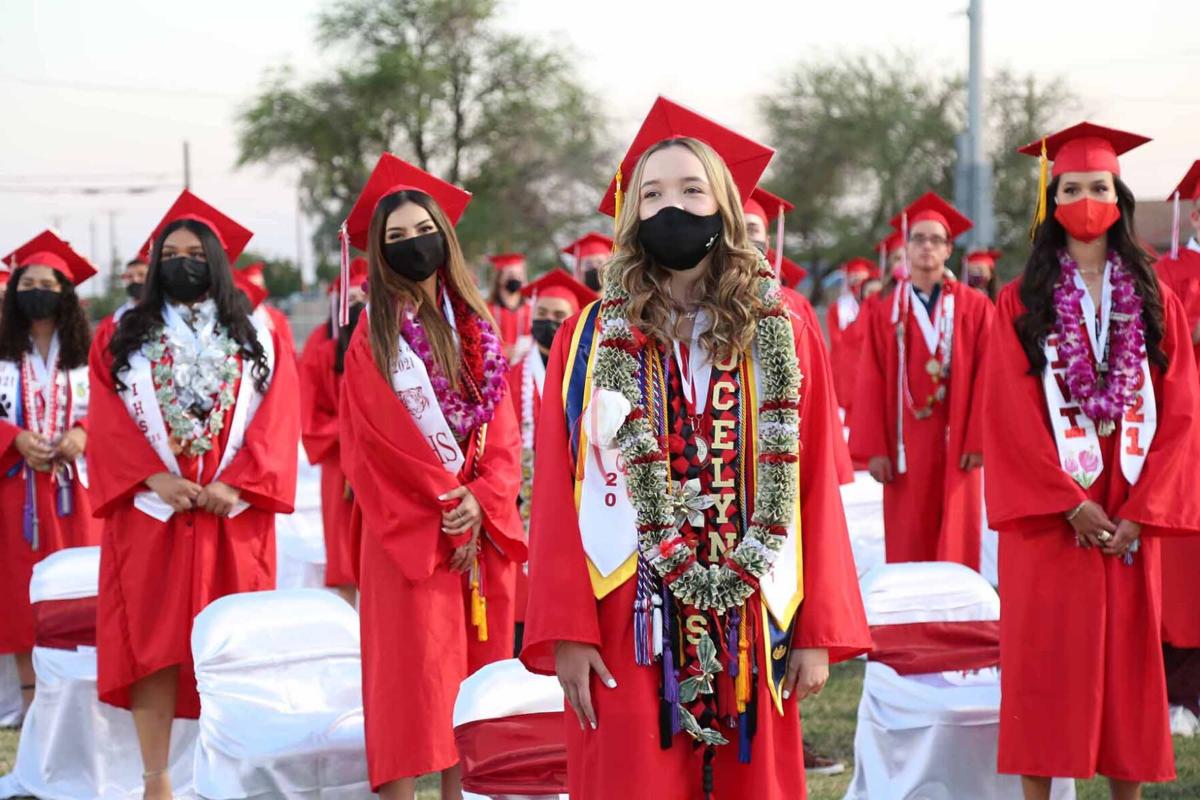 Graduating seniors wait for a cue to be seated during the Class of 2021 Commencement Exercises at Shimamoto-Simpson Stadium in Imperial High School. JOSELITO N. VILLERO PHOTO  Friday, June 4, 2021 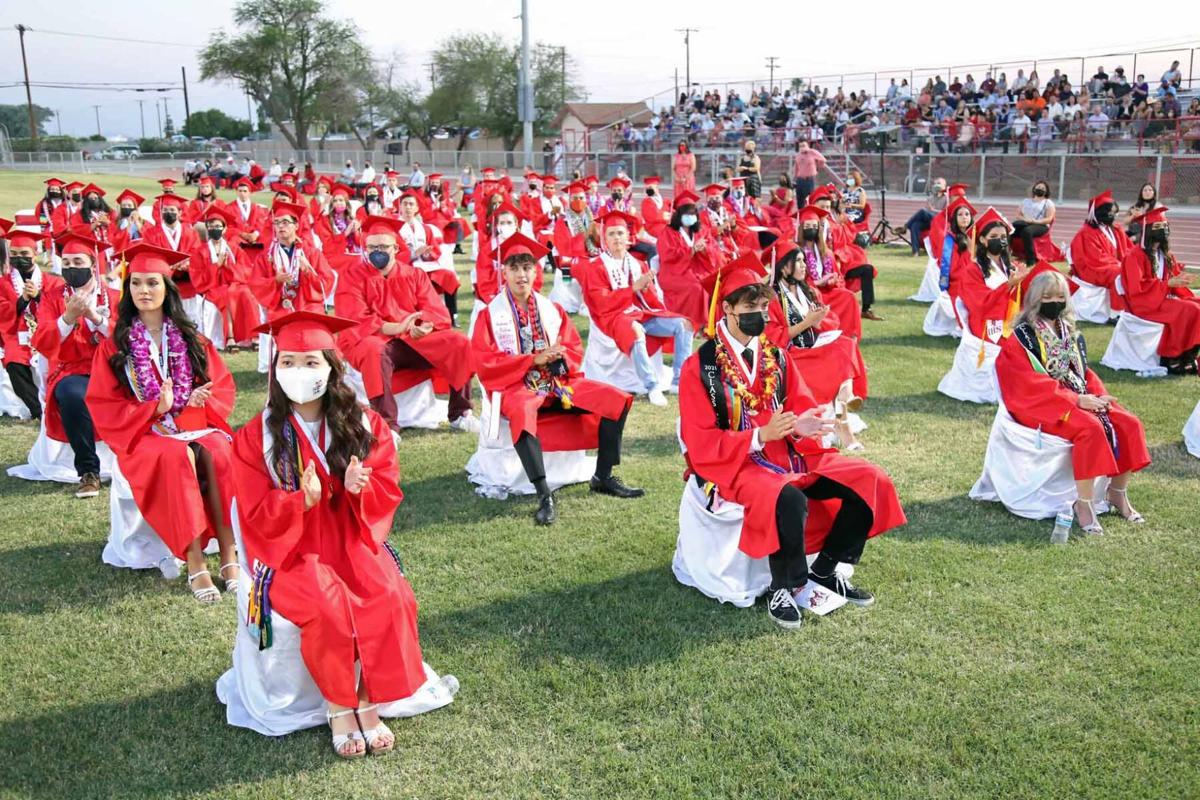 Graduating seniors wait for a cue to be seated during the Class of 2021 Commencement Exercises at Shimamoto-Simpson Stadium in Imperial High School. JOSELITO N. VILLERO PHOTO  Friday, June 4, 2021

IMPERIAL — Parents, loved ones, and guests cheered as the Class of 2021 walked toward their assigned seats Friday, June 4, at Shimamoto-Simpson Stadium in Imperial High School.

Bleachers were not at full seating capacity and seating for the graduating students followed social distancing protocols. Only two guests were allowed per student.

Other guests, however, stayed in their vehicles parked next to an irrigation canal behind a stadium fence where they honked their car horns to cheer.

“There were 300 graduating students,” said Principal Joe Apodaca. Even though there were less people in attendance, “the commencement was more intimate.” According to Apodaca, only parents, guests, and school officials were present.

The commencement was streamed live on social media thus providing the opportunity for loved ones and friends to watch the graduation from the comfort of their homes. A large screen behind the stage showed the different angles of the commencement ceremony — speakers, students, and the parents in the audience.

Last year’s pandemic caused challenges, prompting school officials and teachers to seek creative ways to teach students through distance learning. The students were tenacious and persevered through the demands of learning, said Apodaca.

Apodaca called Class Salutatorian Maleeha Amir and Class Valedictorian Axel Abrica to deliver their speeches — their final message to their class before they separate ways to different colleges and universities.

“It feels great,” said Amir, for completing high school at the top of her class.

“I will study biology and biological engineering at University of California Los Angeles,” said Amir. Although difficult, Amir said, she found ways to get motivated and to enjoy learning.

Abrica described his high school years. “The four years were stressful and rewarding. But it was a relief to finally graduate,” said Abrica, who has been class president for the past four years.

Abrica said he will study economics and government with a minor in mathematics at Georgetown University in Washington, D.C. He may pursue a master's degree, and then return to California to serve in the government where he will focus on closing the gaps in education between the rich and poor.

His valedictory speech revolved around a Hebrew word, “Timshel,” he learned from a required reading, “East of Eden” by John Steinbeck. Timshel means “You may have the choice;” that a person may have a choice what to do with their life.

“I came to America from Mexico without speaking English,” he said. Abrica eventually learned English with the encouragement from his parents who both spoke Spanish only. According to Abrica, his father purchased dictionaries and together they learned English. His father and mother were seated in the audience.

The Imperial Unified School District Board of Trustees conferred diplomas to the 300 graduating students. Students wore assigned cord colors to designate club affiliations; others wrote on their caps destination colleges and universities; and some had leis around their necks made with flowers or dollar bills.

This was followed by a presentation of the Class of 2021 by Apodaca and a fireworks display.

“I’m extremely proud of our students, teachers, and our counsellors,” said Apodaca.