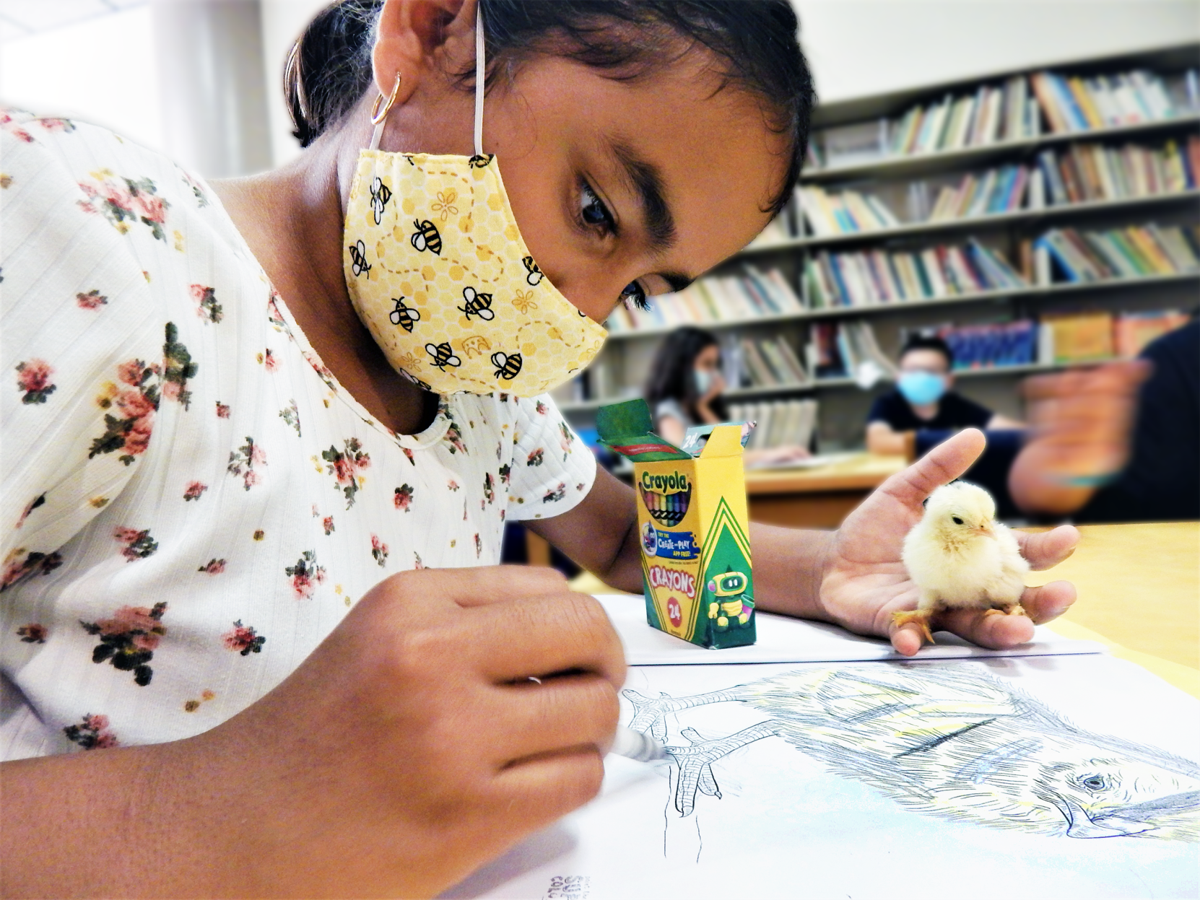 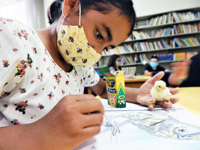 Fremont Primary student Isabella Vivian holds a small chick as the model for her coloring project, Sept. 7, in Calipatria. 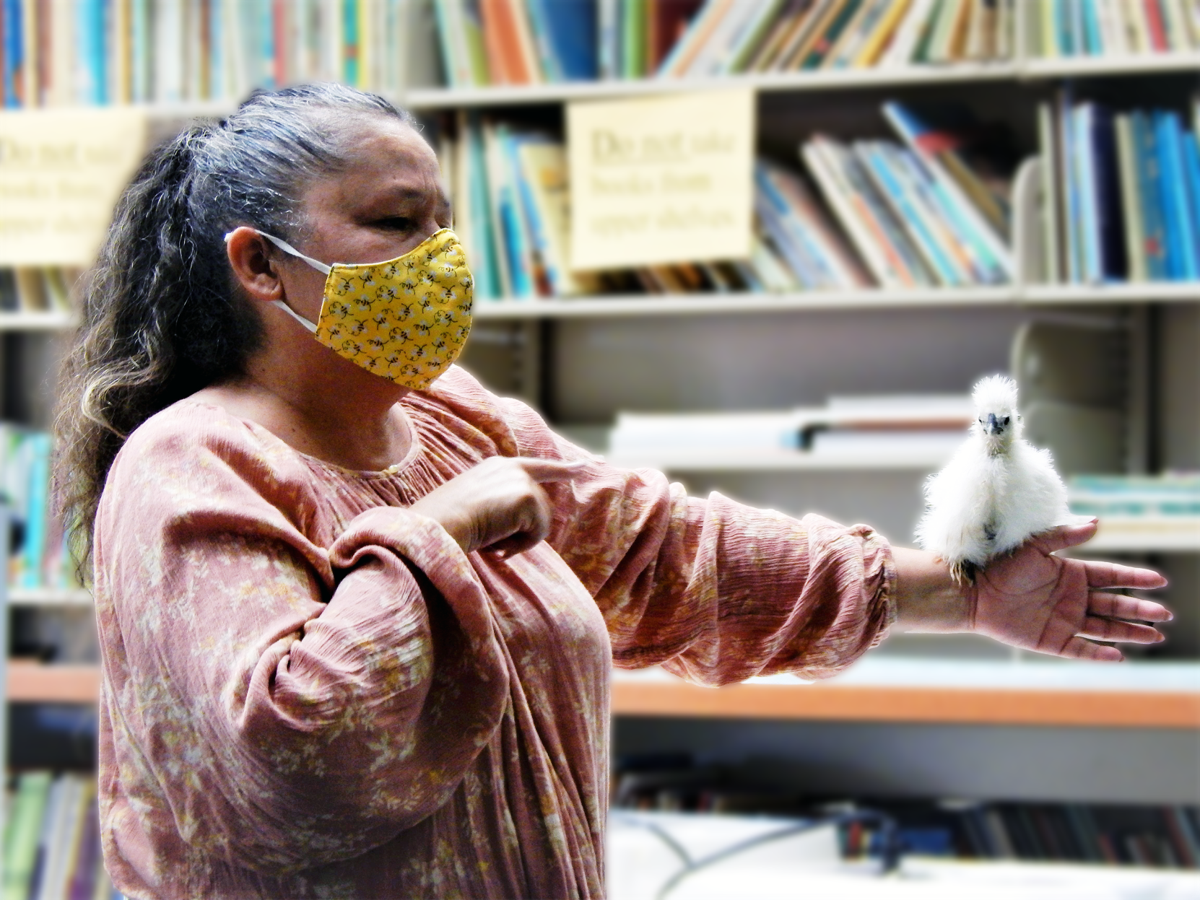 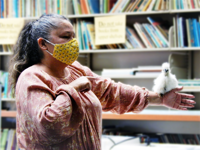 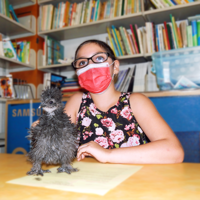 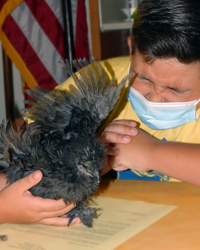 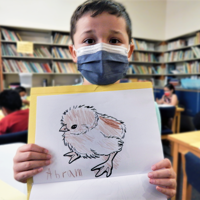 Abram Arroyo shows off his colored chick art as part of the ASES incubation project at Fremont Primary School, Sept. 7, in Calipatria. 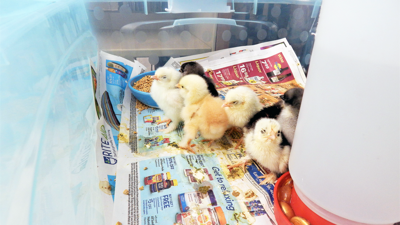 Fremont Primary student Isabella Vivian holds a small chick as the model for her coloring project, Sept. 7, in Calipatria.

CALIPATRIA — Among the chirps of fuzzy little chicks, Fremont Primary School students were chattering about the newly hatched eggs Sept. 7.

“Am I going to clean up after all of these,” afterschool instructor and school administrative assistant, Yolanda Fiorenza, asked her class. “No,” the students answered in unison. “What are some of the responsibilities you have taking care of an animal,” she asked. “Picking up its dookie,” answered fourth grader Aliyas Chavez.

The ASES programs “provide literacy, academic, enrichment, and safe constructive alternatives” for students from kindergarten to ninth grade during non-school hours, according to the Imperial County Office of Education website.

Abram Arroyo shows off his colored chick art as part of the ASES incubation project at Fremont Primary School, Sept. 7, in Calipatria.

ASES is designed to enhance student success in a variety of ways, according to the website, yet Monroe said the programs help students learn “cool stuff like (hands-on) science and 3-D printing, (things) that we probably wouldn’t be able to learn during the regular school day.”

“Right now, we're really pushing ‘learning by doing,’” he said. “I think that aspect of learning is what goes deep.”

In addition to homework help, tutoring, and reading intervention on the academic side of the afterschool programs at Fremont, Fiorenza’s students and their incubation project are one of three hands-on ASES programs currently underway at Fremont, the other two being a garden, and the Fremont Primary News.

Monroy said Fiorenza “really took it upon herself to kick it up a notch” by bringing in some of her own animals to get the students interested in animal science.

“Last year, I did a little petting zoo and brought my geese, peacocks, and turtles and the kids loved it,” said Fiorenza, who was formerly a poultry leader for Magnolia 4-H. “I live out in the country and to me hatching is no big deal (but) then I realized that some of the kids don't see (those types of things).”

In the Fremont ASES Incubation Project, Fiorenza’s students follow the development of unhatched, developing chicks in their eggs for 21 days, using a special light in a process known as “candling” to view the inside of the egg without damaging the unborn, forming chicks.

“You can actually see the heartbeat, the veins, the different development, and then they actually saw them hatch,” she said.

The 72 eggs were put into incubators which are housed in the Fremont school library. Though only 18 survived the hatching process, Fiorenza said the children were so excited to see their chicks hatch that some came to campus over Labor Day weekend to see the chicks break out of their shells.

The students also learn the differences in the types of chickens, as Fiorenza showed them older, more feathered chicks, as well as working in folders for storing their info and coloring pages using the chicks as live, bouncy models.

The children chattered about the look of the chicks, their baby behaviors, and the feel of their tiny, soft, fluffy feathers (also known as down).

“I like how we get to see and witness the birth of the chickens and how we get to do our own folders and get to color it,” Fremont student Giovanni Vivian said. “It was exciting and cool, the way they got out (of their eggs) with their beaks.”

“What makes me keep doing it is the way they teach us and (help) us learn,” the fourth grader said. “We get to hold it, learn about it, and get to see it in person instead of seeing it virtually or like pictures of it.”

“Every student who showed up to class got to name their own chicks,” Vivian said. “I named mine Chicken Pox. It’s a gray and yellow bantam.”

“(I named mine) Poofball Tina, because it's soft and cute,” third grader Michael Corrales said of his white silkie chick.

“I'm kind of happy (to do this project) because I like to see chickens, cows, pigs, horses, ponies … and goats,” he said. “(The chicks) have wings, a beak, they need water, and I like to touch their (feathers).”

Most of the ASES students will also be taking the chicks home to learn how to take care of them for two weeks, Fiorenza said. She said she hopes the project may get some students interested in joining 4-H or FFA in the future.

Fiorenza’s next ASES happenings will be a cross between having students raising mealworms to feed the chicks and reading to develop their imaginations for Project BookWorm.

“Seeing living creatures be born is something they're always going to remember,” Monroy said.

“I love animals,” one of the young girls said.

ASES programs are available in 10 school districts within Imperial County and Ballington Academy for the Arts and Sciences in El Centro, according to the ICOE website.

Contact your local elementary and middle school offices to find out more about ASES programs available in your school district.