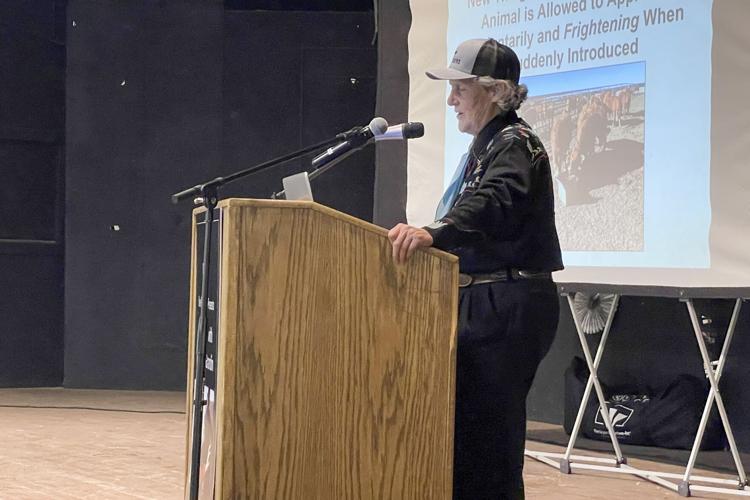 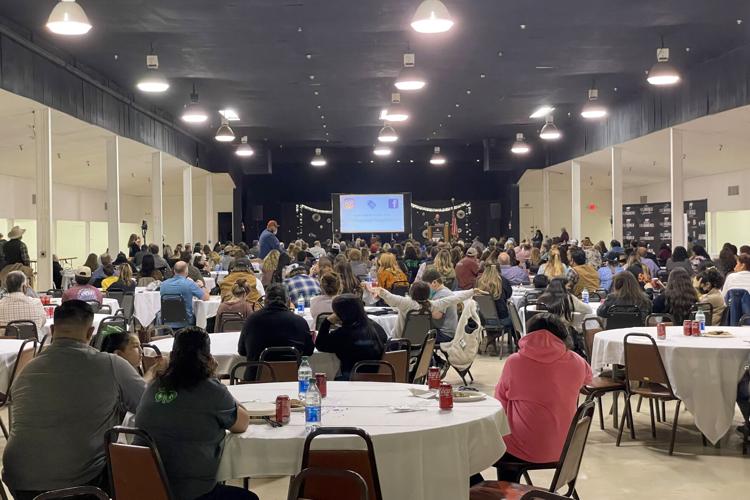 IMPERIAL — Temple Grandin gave the keynote address at a private event at the Casa De Manana building on Imperial Valley Fairgrounds Tuesday, Jan. 25. The famed scientist spoke to an audience that included the Autism Support of Imperial Valley, Future Farmers of America (FFA), and Imperial County 4-H, and organized by One World Beef Packers.

As an individual with autism, Temple Grandin is well known as a professor of animal sciences at Colorado State University. For decades she’s maintained a public persona as a public speaker and has authored books on both autism and animal science.

“I’ve been in this industry for more years than I want to say,” said Grandin. “So then why do I keep talking about these things? Because of new people coming into the industry.”

Grandin said during her keynote presentation that she still finds many people throughout the world that don’t understand animals the way they need to. She said her autism has helped her to better understand animals more so than most farmers in the industry.

Grandin said that the Imperial Valley plants she’s toured this week have been among the best she’s seen because of how well they understand their own animals.

“You’ve got management there that really cares, and that’s really important,” said Grandin.

One World Beef Vice President Kim Herinckx is the event coordinator responsible for getting Grandin to agree to appear at a series of events.

“Temple’s been here several times. Temple did her graduate work at Arizona State University and worked at several feed yards here in the Valley and in the Yuma area,” said Herinckx. “She’s been down here; she actually designed the animal handling facilities for Brawley Beef when the plant was originally built.”

Herinckx said she’s worked with Grandin several times and thought it would be great to have Grandin headline some community events while she was in the area. Herinckx said they were already in the process of getting her to come and review their facilities and conduct hands-on training when they thought of expanding her presence into other opportunities with the public.

“One of our directives always is, we want to give back to the Imperial Valley and the community and we love working with the youth,” said Herinckx. “So that’s kind of where this (4-H and FFA) event started from, an event that was going to be a bonus feature for the beef cattle kids as part of an ongoing animal welfare outreach to those kids involved in that.”

Herinckx said the response was so amazing that they had to change venues several times to account for the growing interest. She said that it was originally only intended for a small amount of their beef kids before expanding it to all 4-H and FFA members, as well as the Autism Support Group of Imperial County (ASIC).

“And that’s kind of where, unfortunately, we had to tap it out due to COVID regulations for an event size, we’re going to be right under just 450 people,” said Herinckx.

4-H Community Education Specialist Anita Martinez said she was really excited when she first was informed of Grandin’s visit. Martinez said she knew it was going to be an opportunity for the kids at 4-H to be part of an event they’ll always remember.

“This is a big deal,” said Martinez. “We knew this was going to be a big deal the moment we heard about it.”

Martinez said it was very humbling that Grandin took the time to do an event exclusive for the 4-H and FFA members and is “extremely grateful.”

“We’ve always known that our county 4-H is different from a lot of the other counties’ 4-H’s,” said Martinez. “Our county is very heavily involved in the livestock and so just knowing that she was willing to come out meant that we were kind of on the map for her.”

ASIC President James Gonzalez said his group was beyond ecstatic when they first heard Grandin was coming down. Gonzalez said Grandin is a giant role model for people in the autistic community and is an example of how far people with autism can go in life.

“It just goes to show that, in essence in some small part whatever level you’re at on the spectrum, you’re still capable of being a part of the community in some way, shape, or form,” said Gonzalez. “She shows through tenacity she was able to overcome many different obstacles, and we appreciate that greatly, to see what she’s been able to accomplish as a person on the spectrum.”